Something different with this review as I do not actually own this figure- it belongs to a good friend who loaned it to me for this review. In light of both the expense and that most U.S. based retailers have sold out of these figures, I haven't removed his feet or hands.

This is the first time I have actually held a Worldbox figure. Two things impressed me immediately: the heft of the body- it weighs almost as much as a TBLeague M34, and the quality of construction in terms of materials, finish, and function.

Worldbox has separated themselves from other manufacturers of jointed bodies, not only for the reasons above, but they've taken sculpting and detailing to a different level. Whereas most manufacturers are happy to give us sculpted torsos and arms, Worldbox gives us sculpted legs, and their own sculpts for hands and feet. Their bodies also have texture, as well as body hair painting.  They also haven't been afraid to produce a body with a paunch (the "Dad" body) as well as a fat body.

This body, the 027, is their most muscular and I believe the tallest one they make. 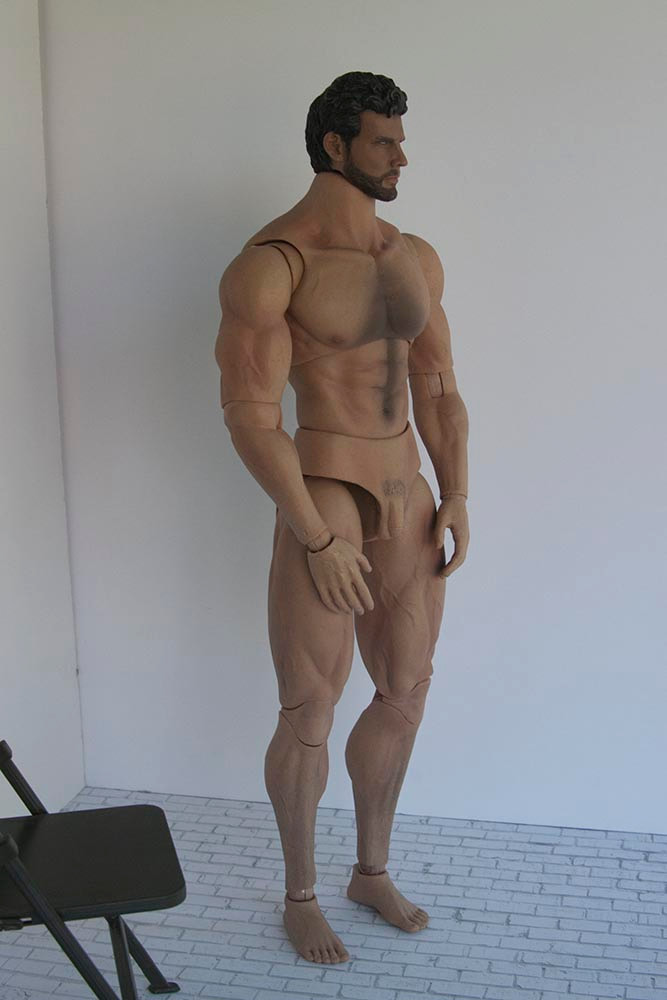 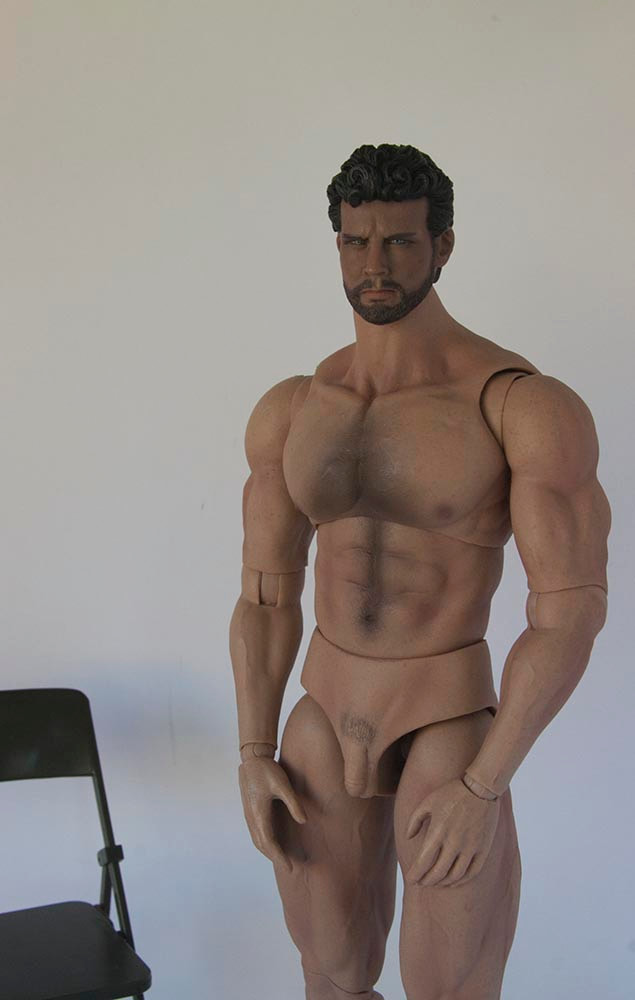 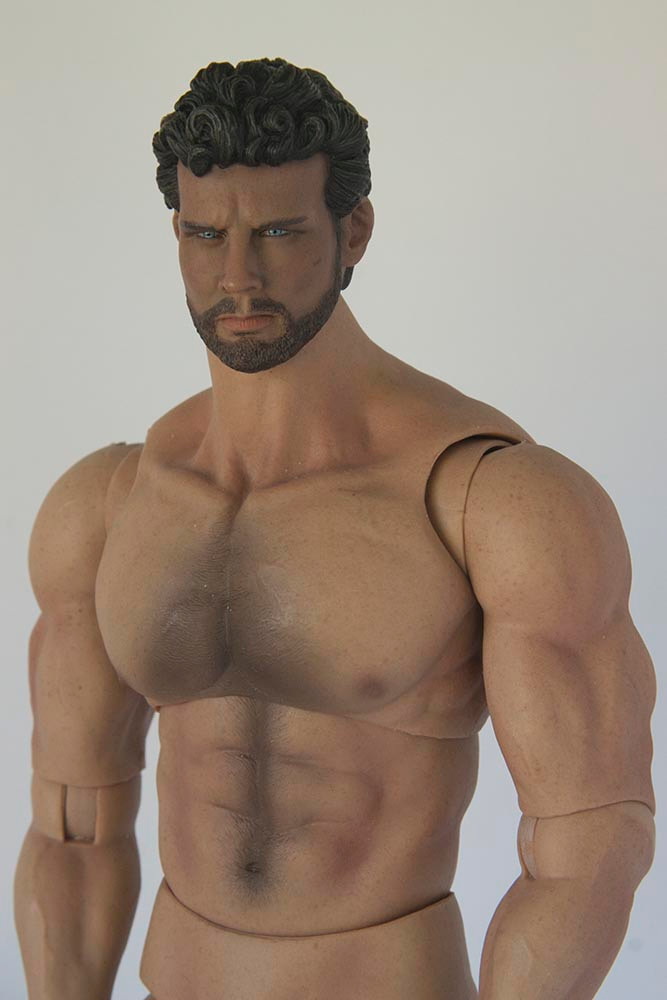 The head is not included with the body. Rather than review a headless body, I chose to use this Phicen head even though it doesn't really match the skin tone. It does fit on his wide neck, something that must be taken into account with most of these really muscular bodies.

Literally no part of the body is overlooked when it comes to sculpting. Starting with the neck, shoulders, collar bone. Texturing, vein detail and even skin pores. 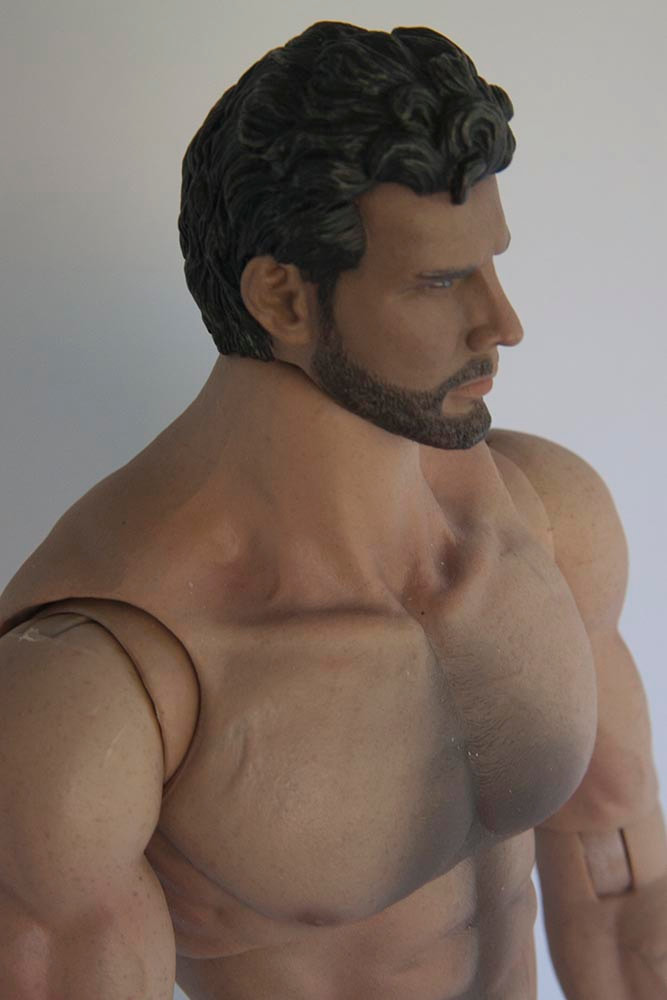 We've all seen male bodies with sculpted torsos and arms that have smooth plastic legs (maybe they're all swimmers). Some include ugly plastic things to clip on the thighs to give them some bulk.  We don't have to deal with such expedients with this figure. 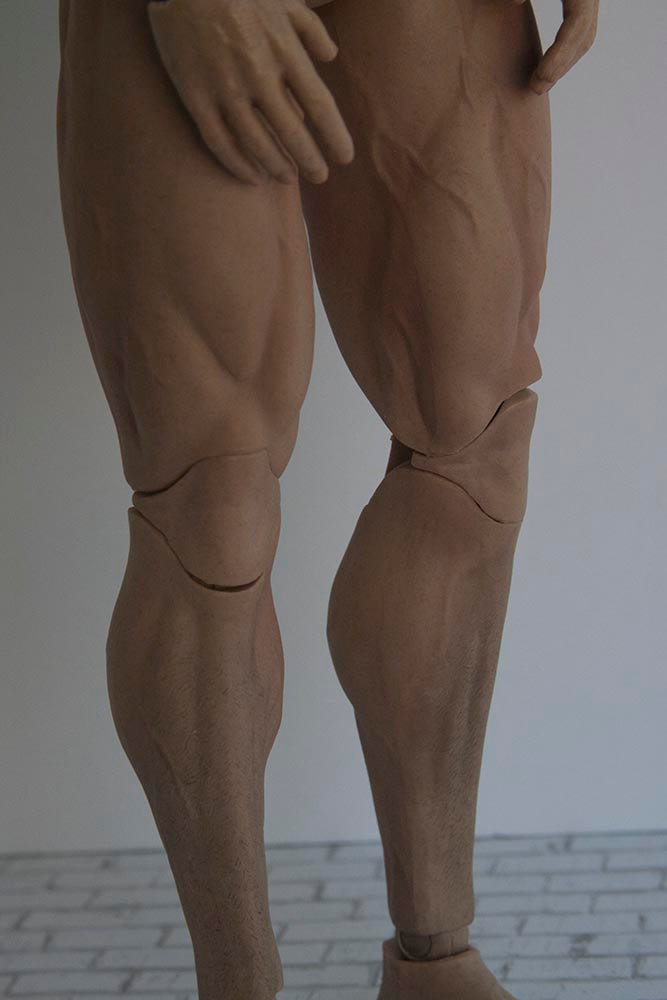 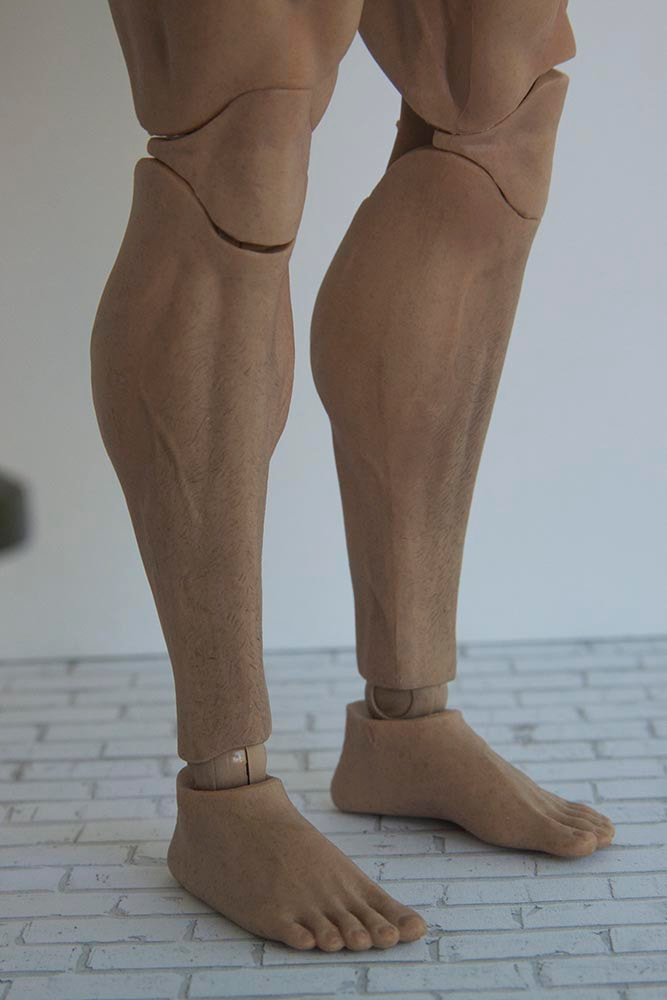 His feet are unique sculpts, with distinct sculpts, and while the toes aren't separate, they do a convincing job of looking as though they are. Not apparent in this photo are the texturing and detailing on the tops of his feet.  Also notice that Worldbox didn't use the Hot Toys ankle pin design everyone else has adopted. Here we get an actual ankle joint. I'm glad to see this, not only for the improved aesthetics, but as I mentioned earlier, this is a heavy figure, and those ankles have to support a lot of weight. They perform as well as they look.

Here's a look at what he looks like from behind. Yes, there are large double joints for the knees that look better from the front. It's the usual trade-off, but I'm happy with how Worldbox has handled this. 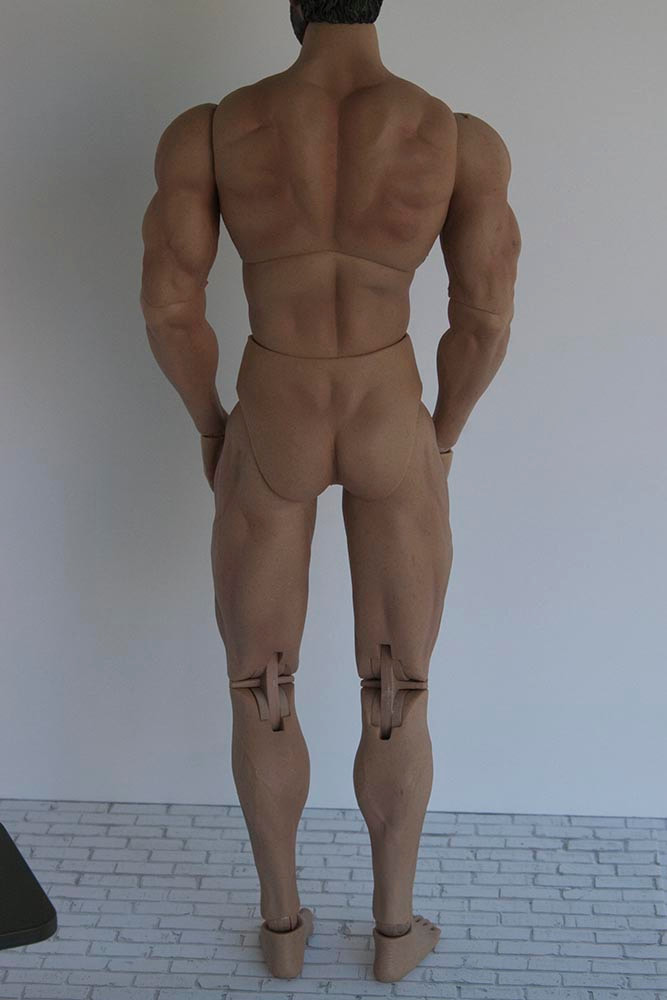 I'm glad they opted for this design rather than a single joint.  Another view of his back: 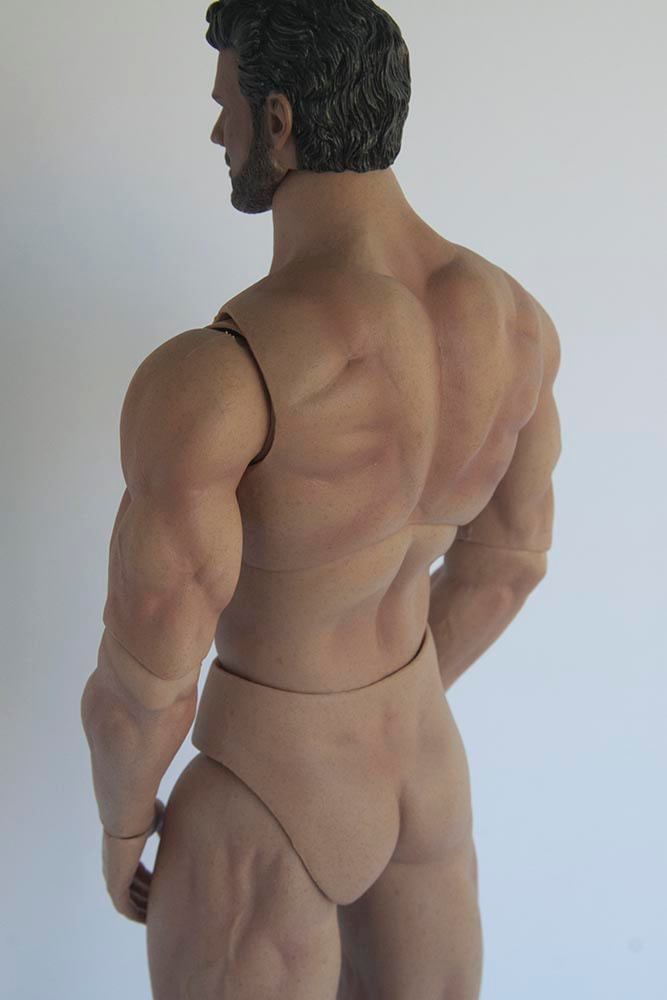 We see it's a great looking body; how well does it work- what's it like to pose?  I decided to try a handgun pose, a basic pose that challenges many muscular bodies.  The design of his shoulders provides enough range of motion to accomplish this pose in a fairly convincing way: 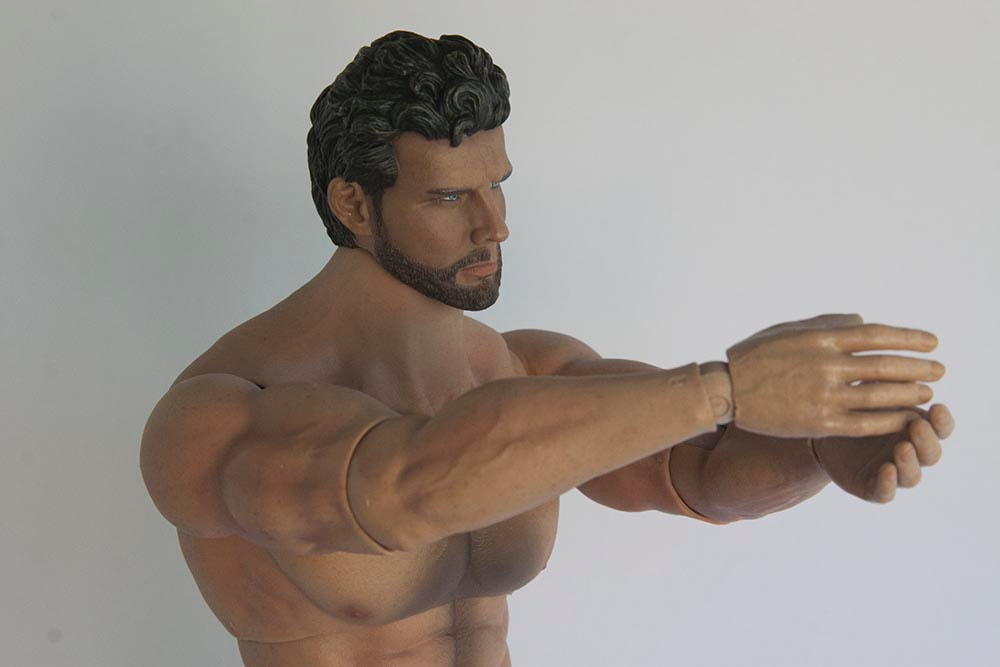 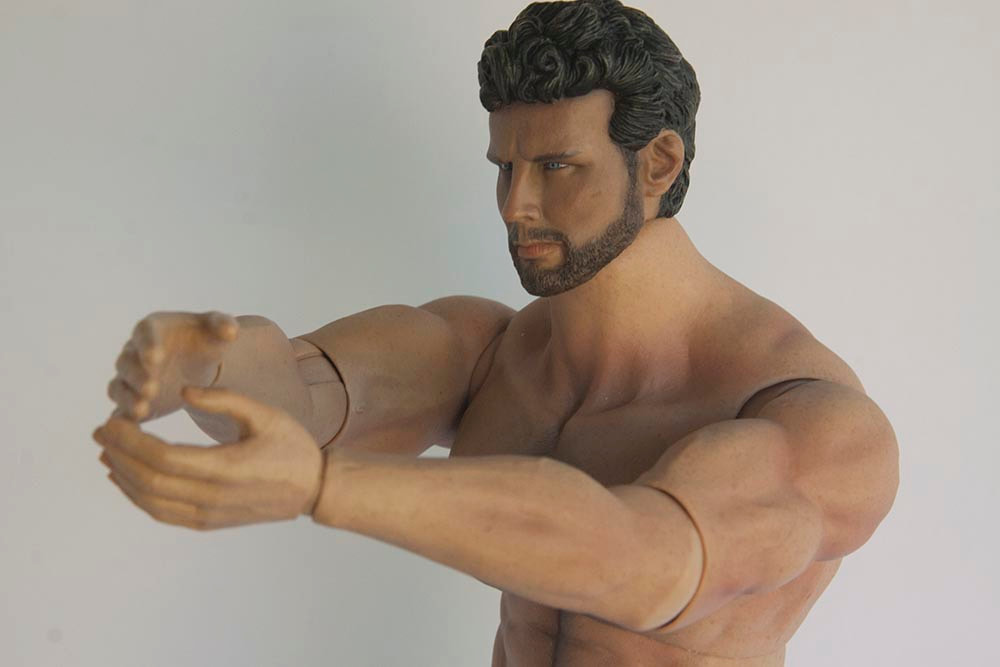 While discussing upper body articulation, I decided to see what the range of motion of his chest and torso look like. As one would expect, he's not going to be a gymnast here, but still there's some useful range, something some of my jointed muscle bodies lack. 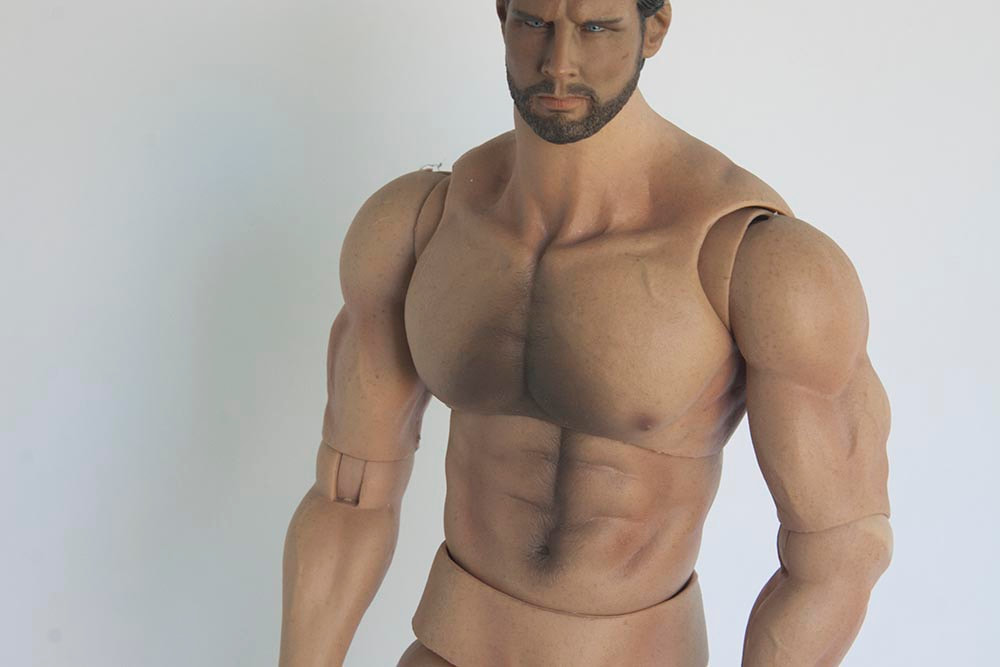 It's pretty much a given that his hips and knees would have fairly decent range of motion, but I also wanted to see how balanced he is, and whether he could stand with most of that weight supported on one leg. He was very easy to pose this way: 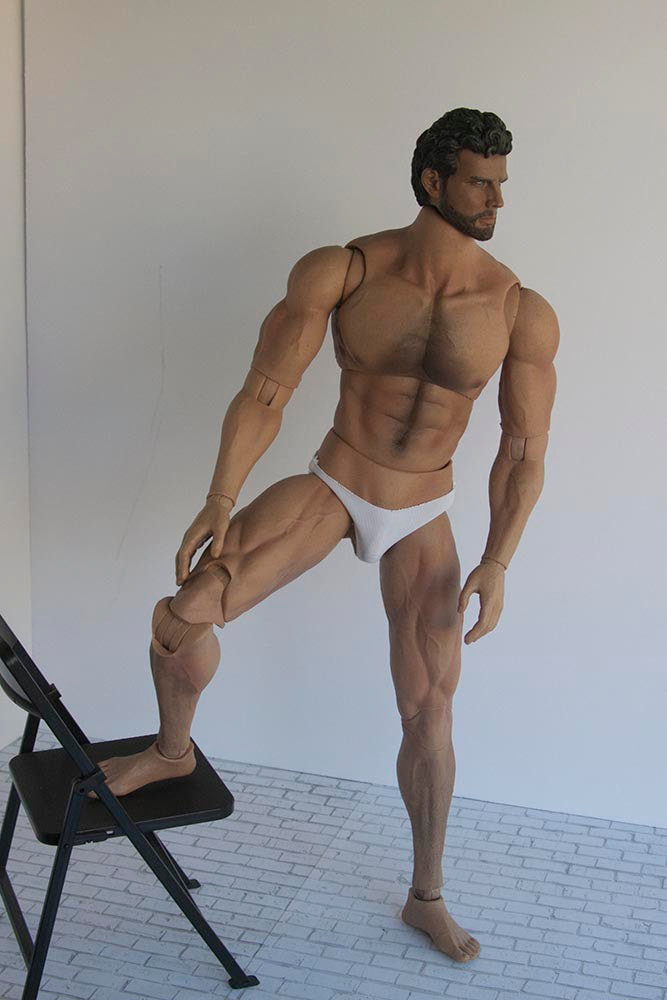 Which also now leads to another basic pose: sitting. It's surprising how much of a challenge this is for a lot of figures (and not just muscular ones).  He does a good job here as well: 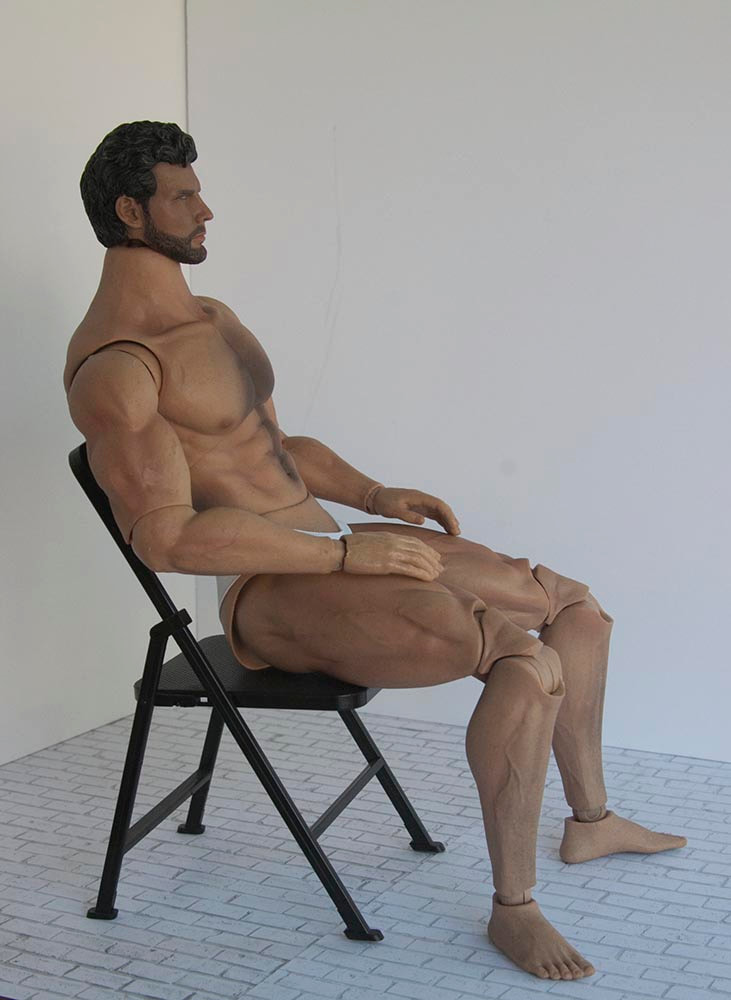 Maybe not exactly a military posture here, but still very useful. In order to make him sit more upright, larger hip openings would be required, and larger gaps along with them. I'm glad Worldbox found this trade-off. He can sit decently, yet we don't have to contend with large unsightly gaps in the hips. He can still wear his TBleague briefs.

Speaking of briefs, this leads to the next area. Do clothes exist for this figure? 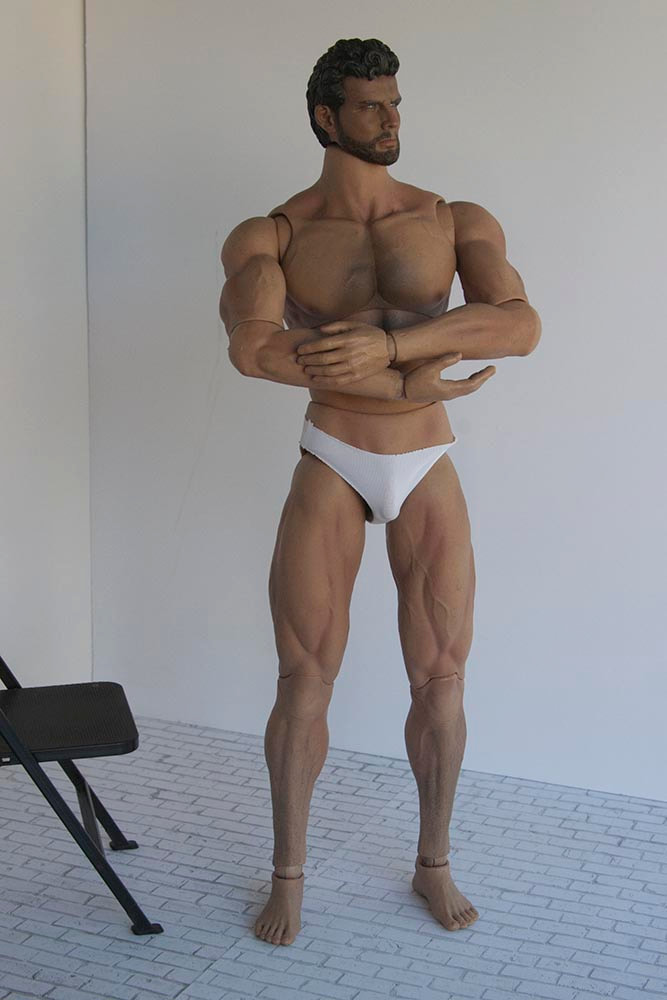 Briefs might not be an optimal choice since they tend to slip into the (relatively small) gaps in his hips, as you can see above.  These Magic Cube skivvies seem to work a bit better, without adding a lot of bulk. The shirt is from TBLeague Alexander The Great figure (as are the briefs). 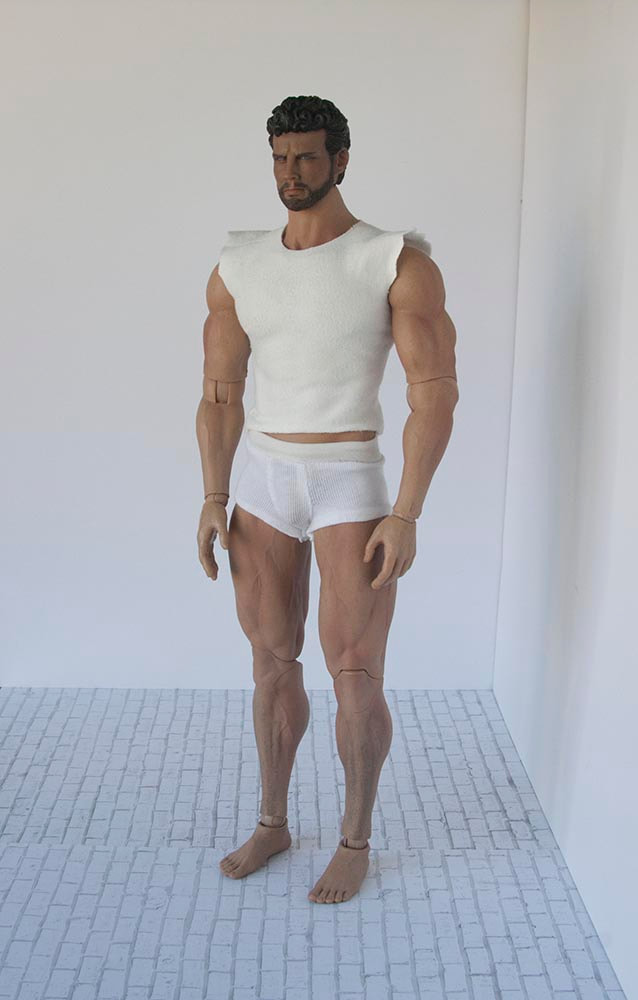 So much for underclothes, most people would want to know about street clothes. An obvious choice is to follow clothing that is tailored to fit TBL M34/M35. Dressing him as a barbarian is a pretty safe choice.  In terms of modern clothing, there are some sets that include pants and shirts for the M34/M35. I have one of these sets. I didn't try it on him because my M34 is using it and he's going to be in a photo shoot.  This is the outfit he's wearing in the very last photo, and I'm positive this would fit 027. What else is there?

In considering clothing options for 027, I suggest looking at clothing that is used on some bulky figures. One such example are the earlier clothing items from Easy And Simple. Their first body was quite large so I tried a pair of their pants on him: 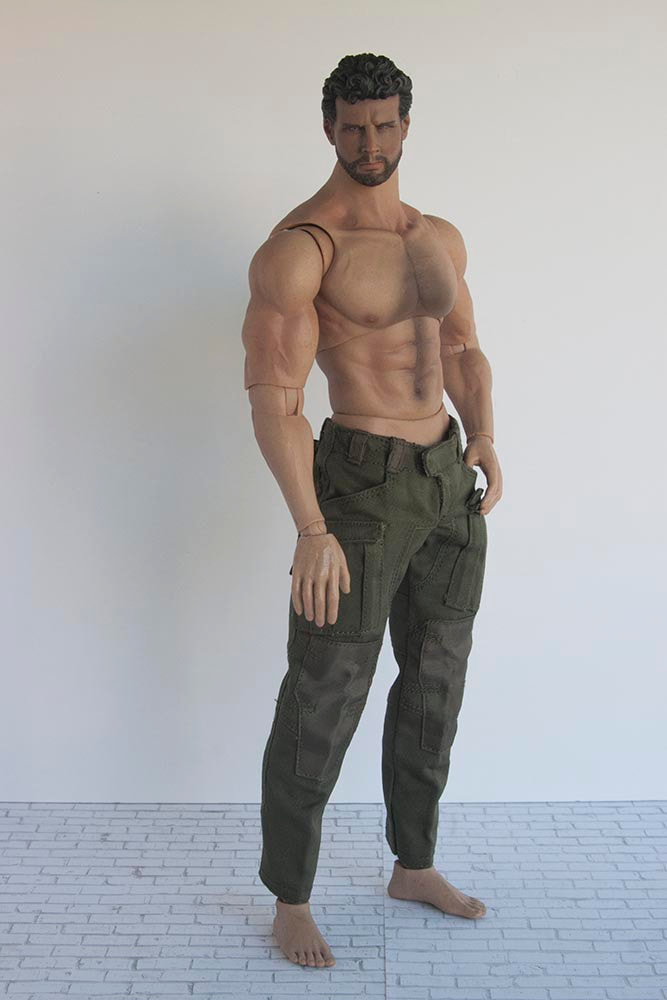 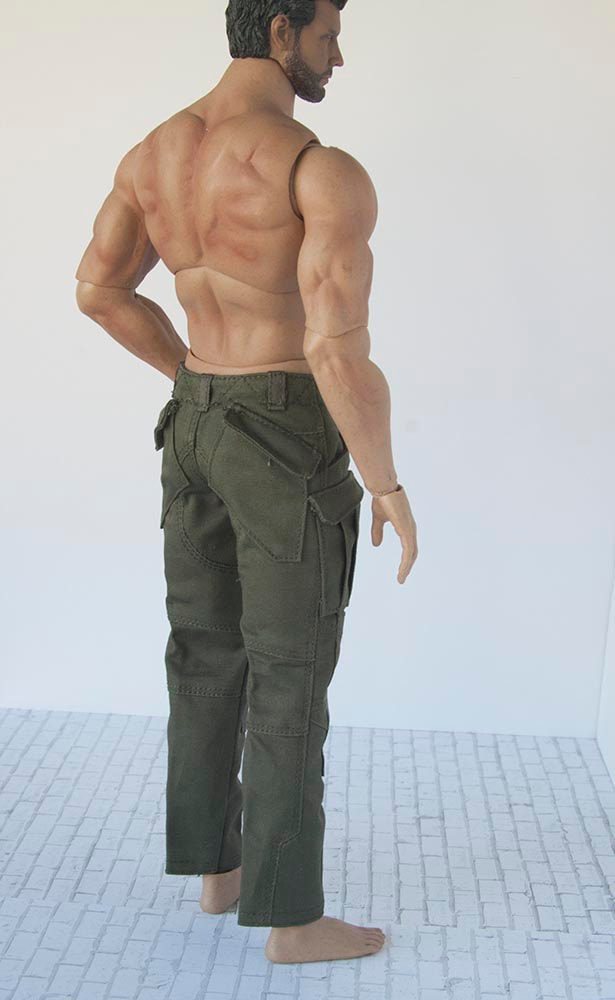 These actually fit reasonably easily and they still allow him some range of motion. I don't consider clothing that is stretched to the breaking point that reduces the figure to a standing statue to "fit".

It would be reasonable that shirts from the early E & S sets to fit, since those early figures had really wide shoulders. I was having trouble putting my hands on one to test this theory so I looked for an alternative. It turns out this shirt from an older set that also used a wide-shouldered figure worked pretty well: 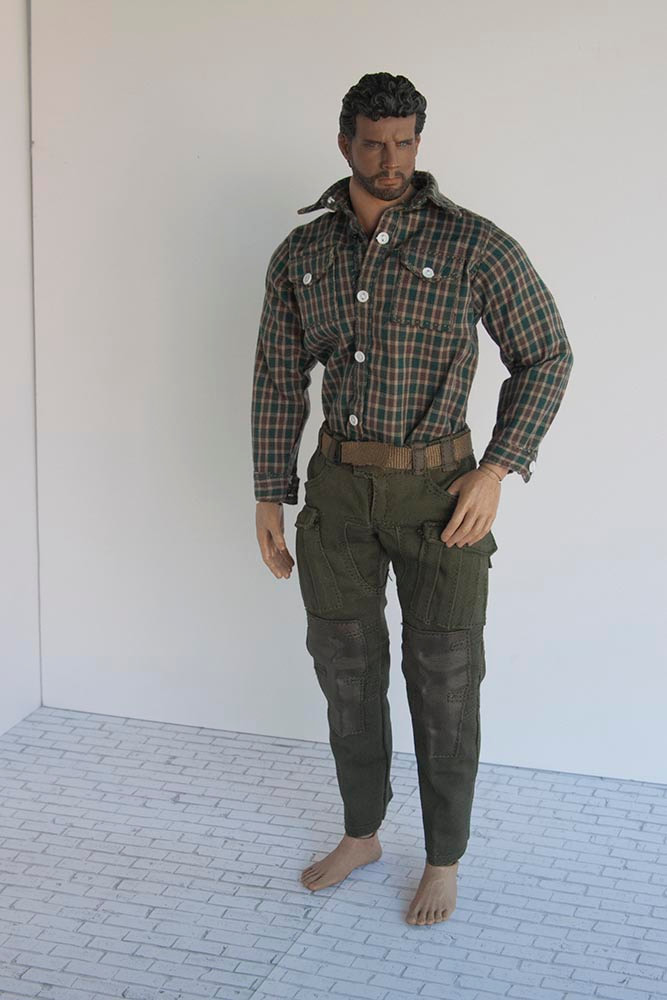 So the answer is yes, he can be dressed in modern clothes, with some thought. I don't think it would be reasonable to try to dress him in Dragon clothing and claim nothing fits him. In fact, I am about to order a full three piece suit tailored to the M35 body. This would surely fit him. The challenges are finding shirts that will accomodate his shoulders and arms, and pants that will not only fit over his thighs, but are long enough.

Did I mention this figure is tall?

Here his is next to my most muscular dudes: 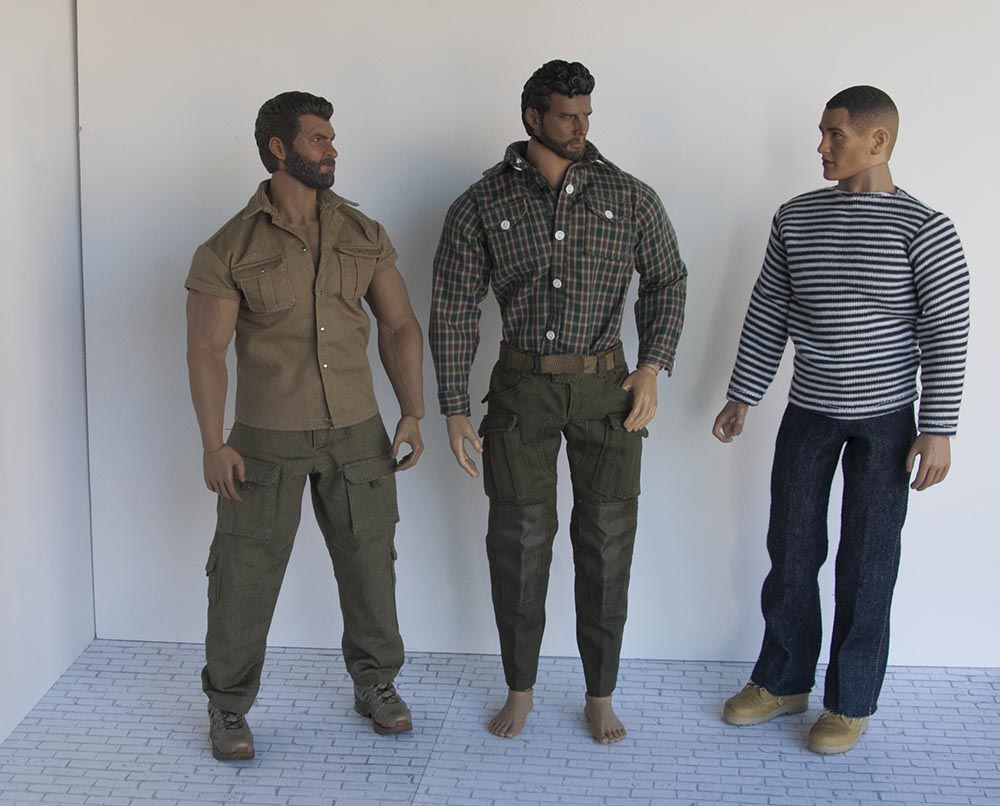 That's TBLeague M34 on the left, and Kaustik Plastic Heroik body on the right. M34 looks svelte compared to 027!

To summarize, I would say 027 is an outstanding figure. Worldbox did their homework thoroughly in his design and execution. For those who are looking for the most muscular body they can find that still has clothing options he's a good choice. There are also people who are reticent to jump into the seamless movement who also want such a built body. He would be a great choice for them. He still has hard skin that is easier to slide clothing on, and though he's textured, he's not as susceptible to staining.

I found this figure a lot of fun to pose and photograph. His upper body has more useful range of motion than most bodies of this type, and his lower body can pose as well as less massive bodies. Despite his weight, he's a balanced figure that stands solidly. All of his joints move with precision. Maybe just a notch down from the TBLeague bodies, but satisfying all the same.

In terms of price, eBay sellers are on the high end of the scale with prices close to $70 U.S. The owner of this figure bought it from Giantoy for significantly less.
7/12/20:

I was asked to provide a few more photos that show his arm articulation.   Hopefully this helps. 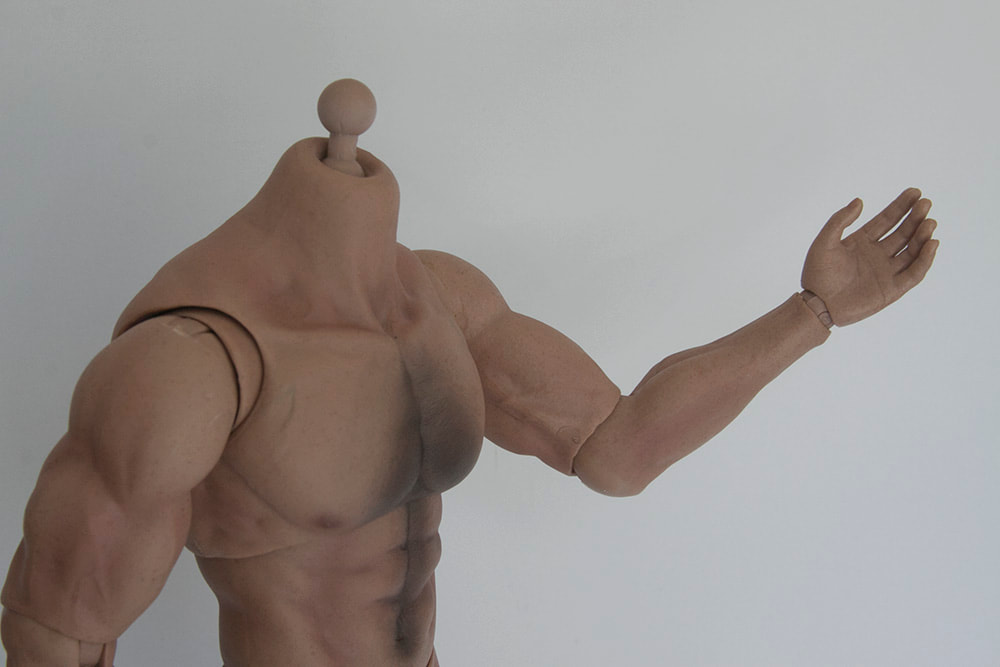 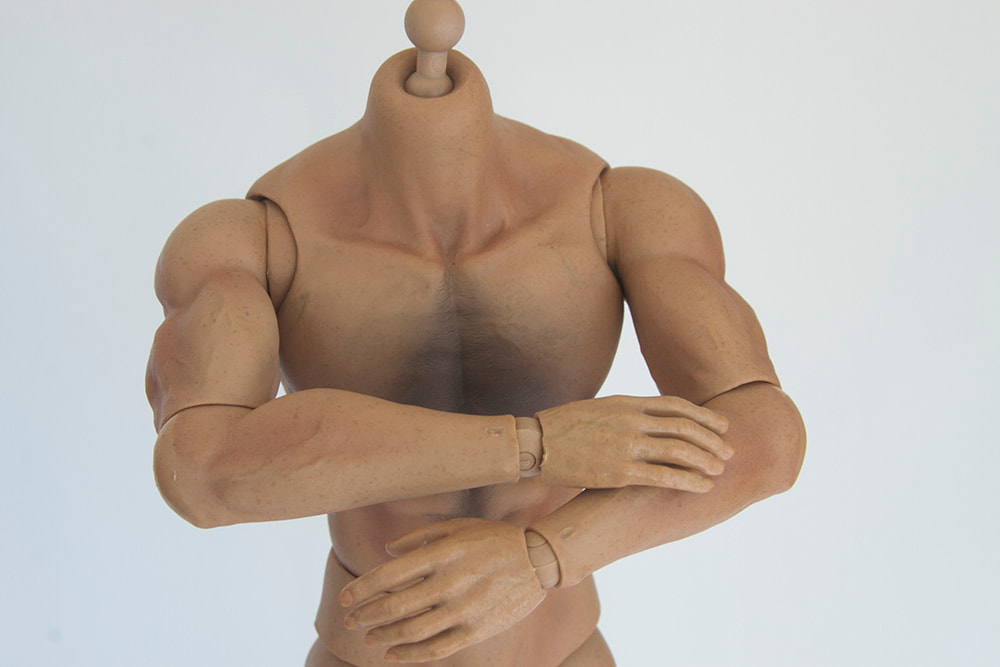 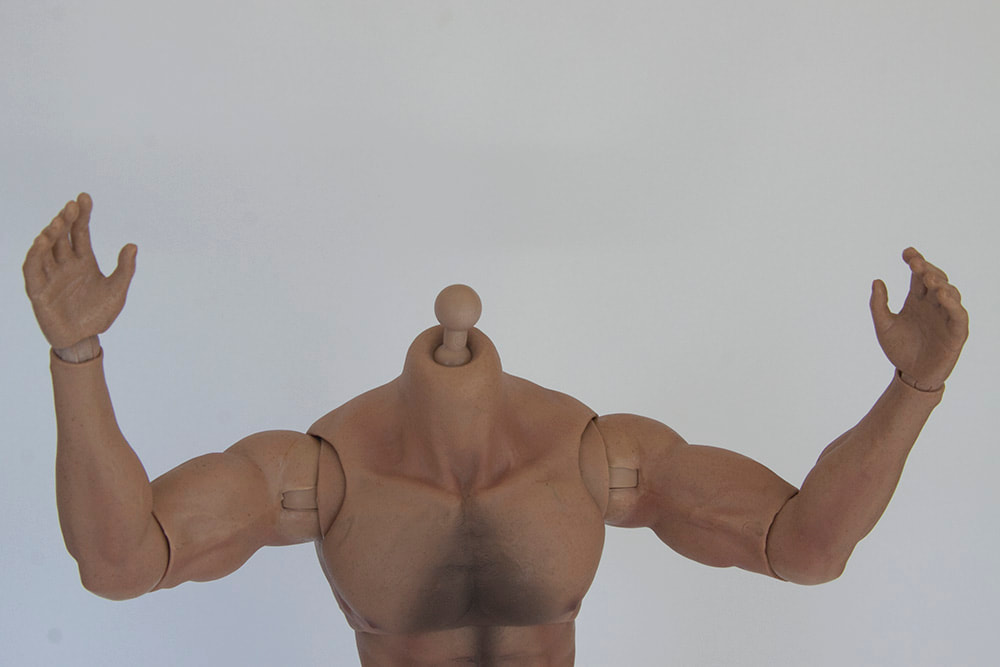