I have always liked this line of figures from Very Cool. Not only are they "irregular" in that they don't represent any standard military, they're not overly equipped. I like the irregular aspect about them because this makes them a lot more versatile. They can be militia members, mercenaries or spies. VC's formula works really well for me: give them enough equipment and a uniform to establish a base for a character yet not so much to drive the price up with stuff I wouldn't use. This gives me a good start for creating my own characters through my own kitbashing. As one would expect, the prices have crept up over the years, but so far they've stayed true to the original formula.

Note these aren't the only female combatants that Very Cool makes. They do make female members of standing armies. For a variety of reasons, I haven't purchased those figures as complete sets, as yet.

I usually only buy one complete set, and pick parts of the second variant. For some reason I have yet to assemble a full figure from the variants' parts, but that is a project I look forward to!

From 2015, the first of Very Cool's shooters, the "CP" camouflage shooter: 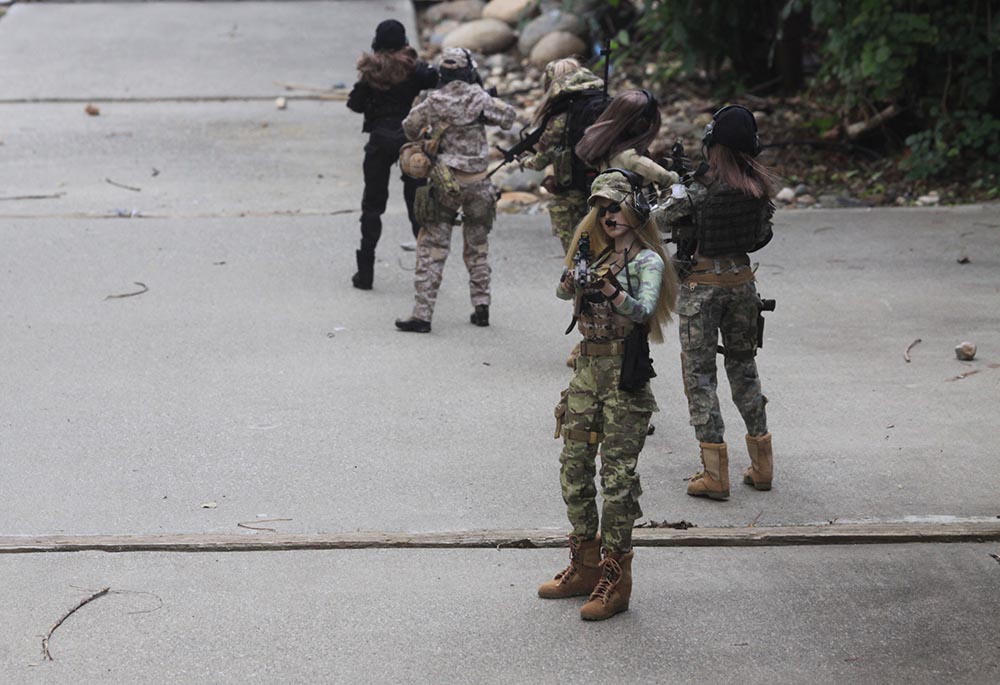 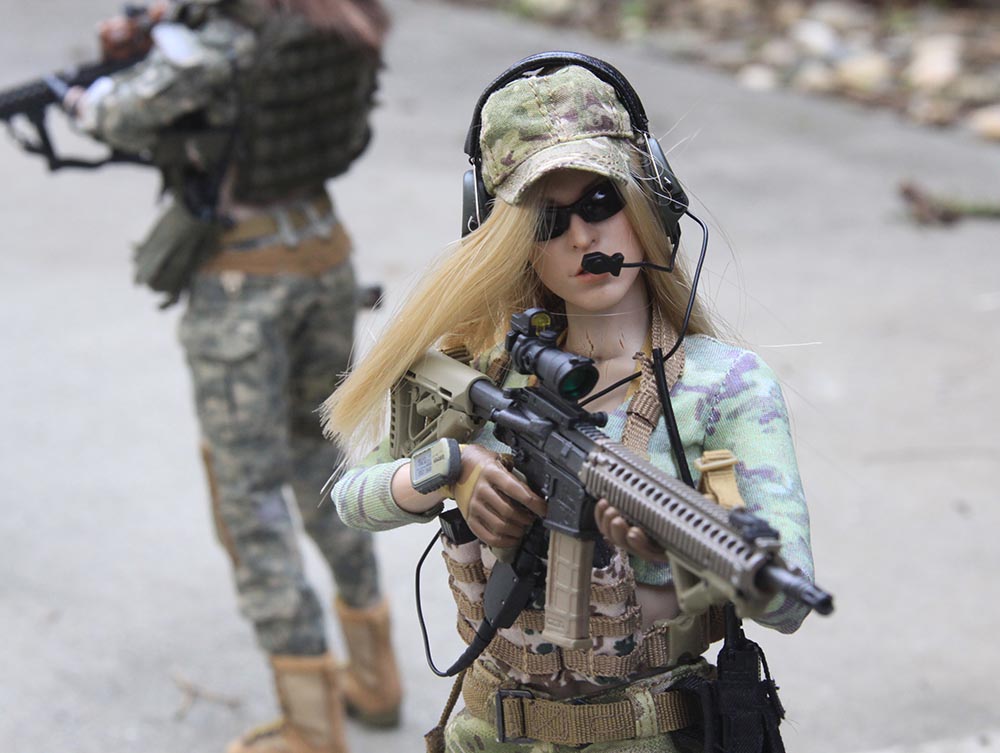 I added the headset and radio, her harness is from the female Flektarn Camouflage accessory set by Magic Cube (that's one set I regret not getting). One of the nice pieces in this figure set is the backpack, which she isn't using here. I really should have equipped all of them with some sort of pack.  This is also one of the first figures that has a proper baseball cap that actually fits the figure. This is something that even the high-end producers can't get right, at least not consistently.

This shooter is the only one to use the first  version of Very Cool's female body. If you look carefully you'll see that her neck is splitting. This is the only VC body to exhibit this condition. I still haven't decided whether to replace it with the same version, the current one or something else altogether. 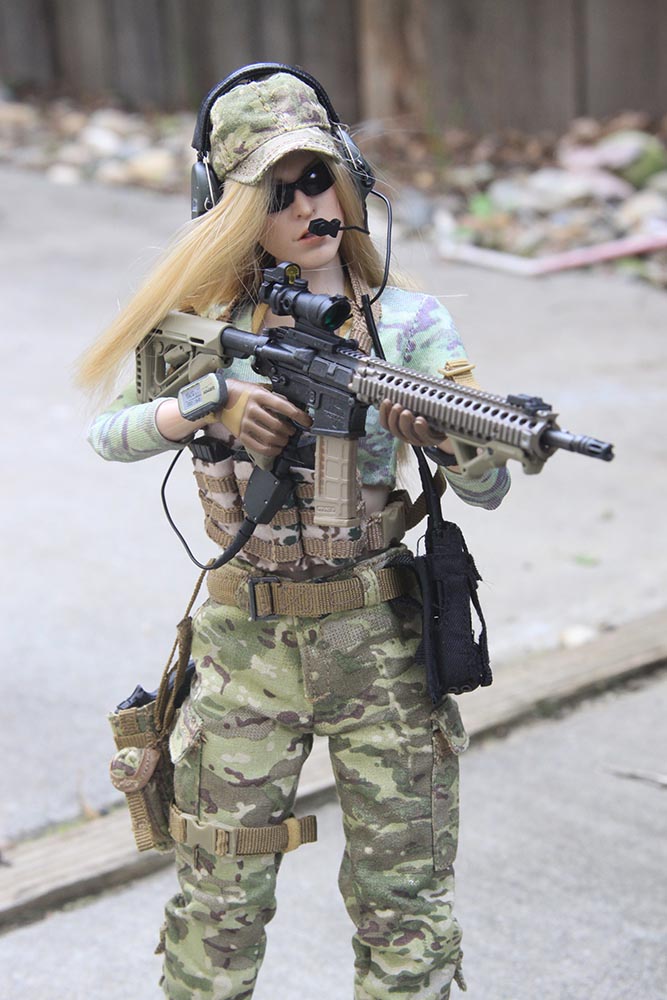 Very Cool makes some of the best boots for female figures in the hobby. These are designed for feet (as opposed to "bootfeet"), and have some really nice details: soles, different fabrics, eyelets and clips for the laces, and they're a realistic size. Not only do they look really good, they function really well, allowing the figures to stand and pose without falling over. These photos were taken in pretty high wind yet none of the figures fell over during the entire shoot. VC also made these boots separately as accessory sets in two tan variants as well as all black (as supplied with the black uniform variant).

Next in this squad is the shooter in ACU Camouflage. This is the release that included a variant with a completely different head sculpt. 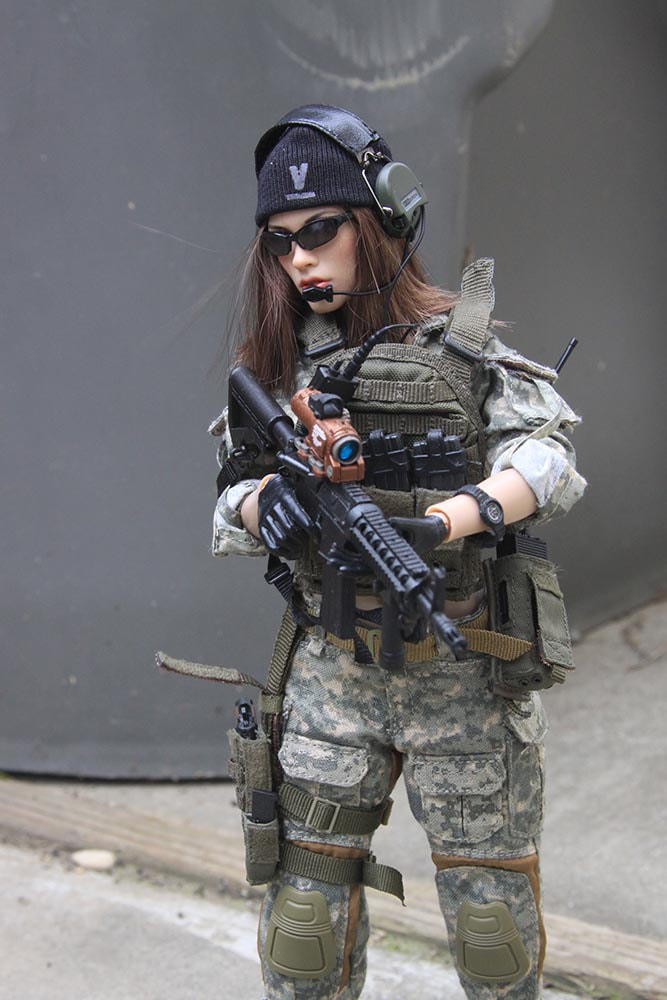 I'm not sure about the thinking VC shows with the strap on her holster- the Velcro doesn't seem to attach to anything, and if it's supposed to go through the straps to secure the .45, it shouldn't have Velcro. There should be a strap to secure the spare clip at the front of the holster. As it is, the strap keeps flipping up in the way. Her harness/body armor is from Saturday Toys. She also comes with a very nice backpack that's bigger than a day pack. 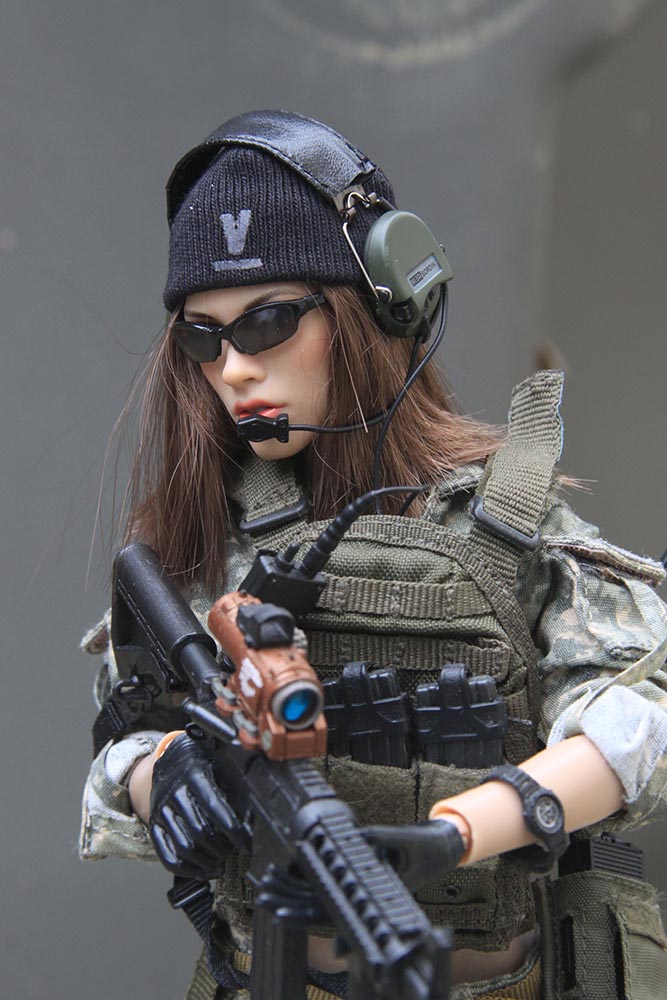 I've tried to make the VC logo on her cap a little more low visibility. 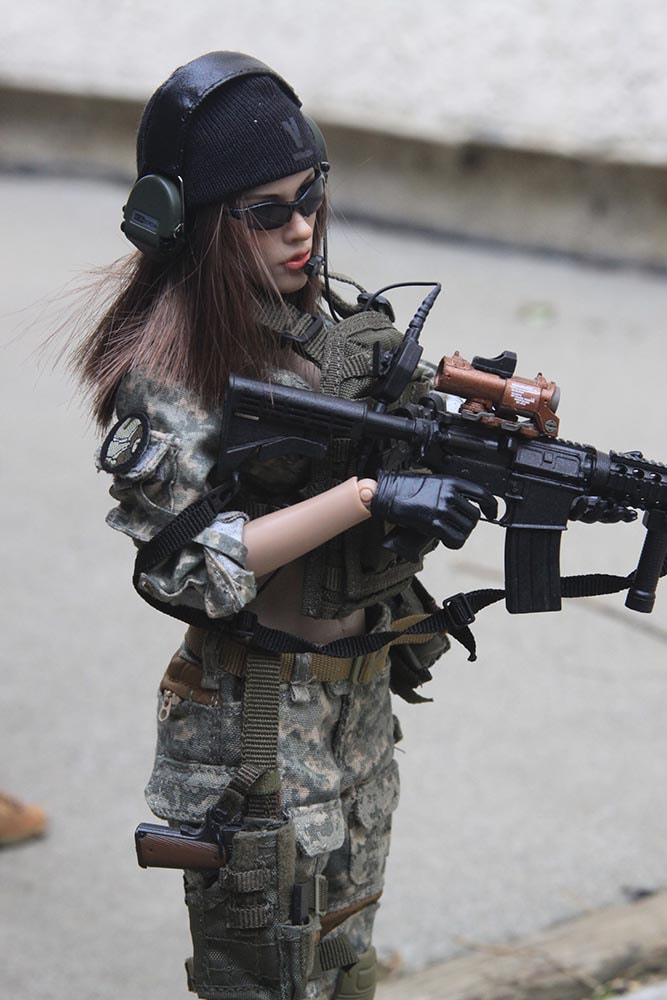 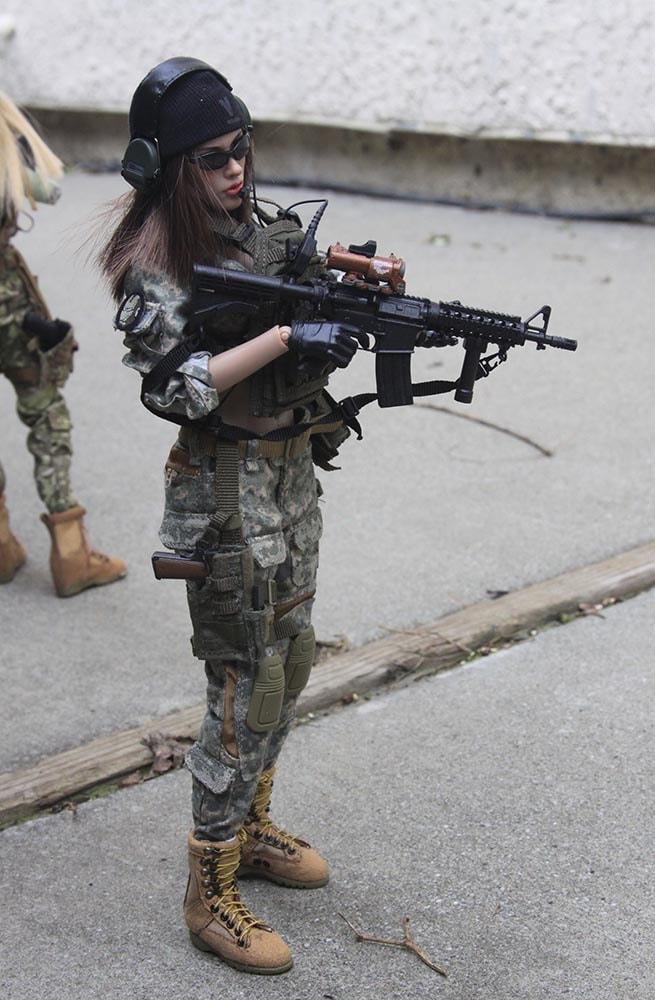 These are actually the same boot pattern as the first shooter, but they used a different color scheme.

The next shooter is "Jenner". Very Cool started giving the shooters names (starting with "Max"). They also started to reduce the content of the sets in a trade-off for a fancy aluminum case. It's a neat case, but I would rather buy that as a separate item and have more accessories for the figure. Of all the shooters, Jenner is the most lightly equipped. In contrast with the ACU figure above, she lost her radio, side arm and any drop-leg pouches. I sourced these items; the side arm is from Easy and Simple, the drop-leg ammunition pouch is from DAM Toys Gemini female PMC figure set. I can't remember if her radio is from DAM Toys, E&S or Soldier Story.

Jenner's variant is a blonde version of this sculpt that wears a different color of this camouflage. She also has a more accurately (less sexy) tactical top. Since I would have had it partially unzipped anyway, I decided to go with this variant. I also think she looks better with this hair color. 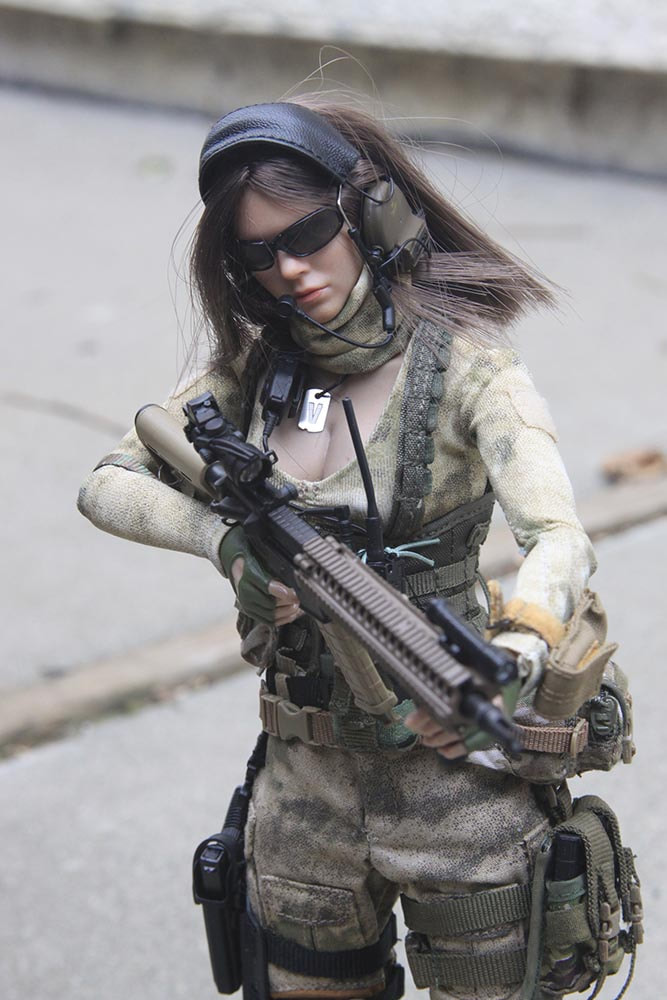 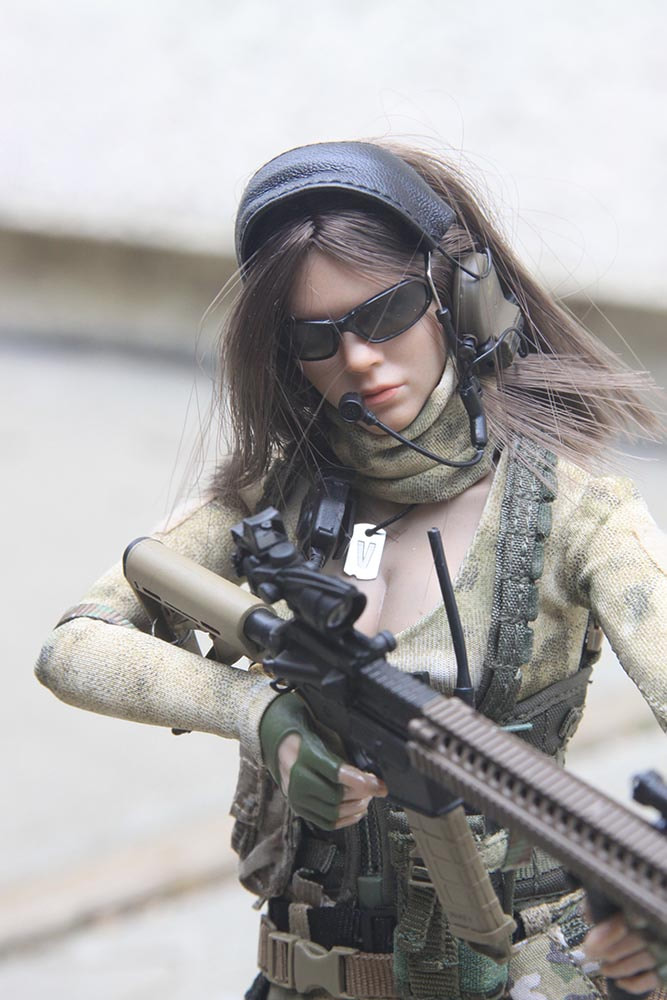 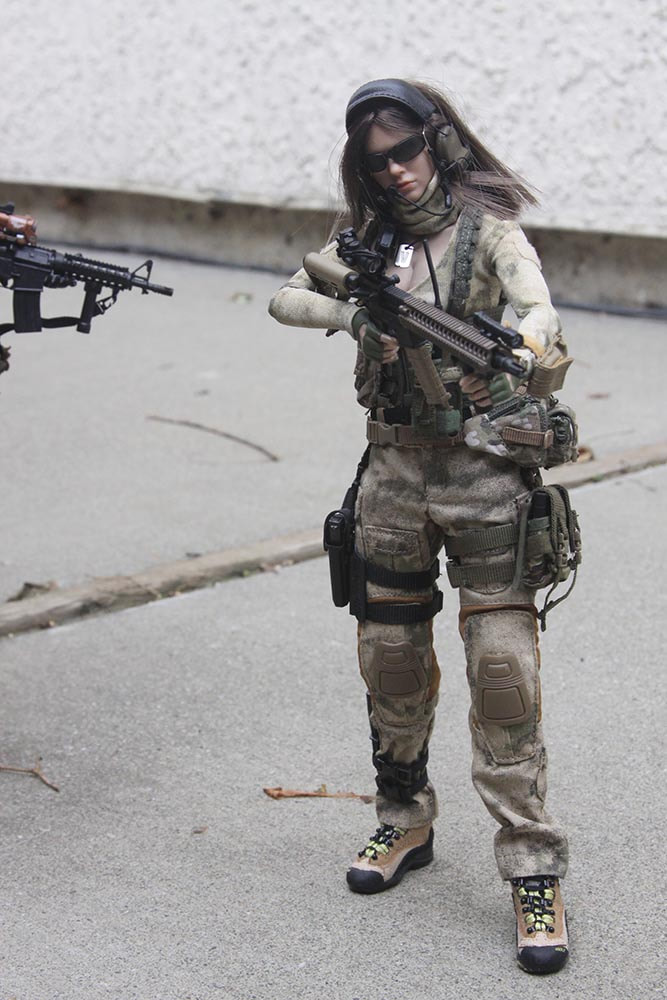 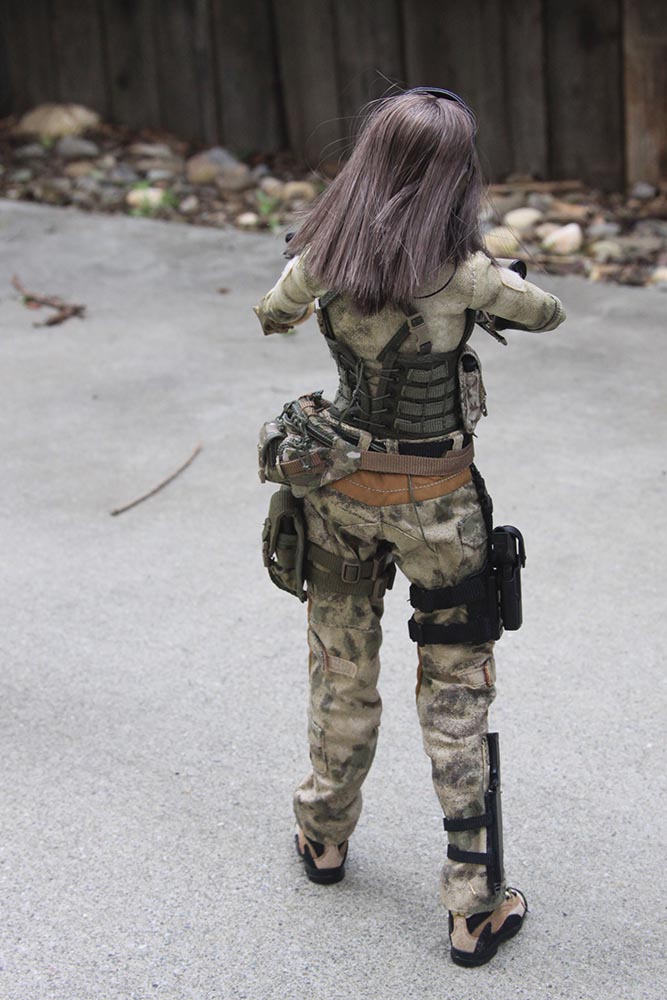 I guess I shouldn't complain too much, they did give her a nice fanny pack and a serious knife. I also unlaced her harness to put it on her before I realized it zips in the front...

A couple things I would like to point out about these figures in general. Very Cool makes some really nice clothing, and you can see this extends to tactical clothing as well. All of the pants have functional pockets, some with zippers. The tailoring has constantly improved both in looks and function. So many female figures have pants that are so tight the figure can't move, which completely defeats the purpose of this type of clothing.

The figures themselves have very nice hands. The fingers are flexible enough to grip weapons and equipment, and they're nicely detailed. VC also includes some bare hands along with gloved ones. I have used these hands as well as the gloved ones with TBLeague figures.

Yet another little detail that I like is VC uses some nice sunglasses, with tinted lenses. They fit the heads well, which shows they spent a bit of time to get them right.

The next shooter is Villa. Mine is the one in Multi-Cam pattern. Very Cool made two other versions of this shooter: Jungle Python Stripes, and Black Python Stripes.  All three use the same head sculpt, and I think even the same hair color. 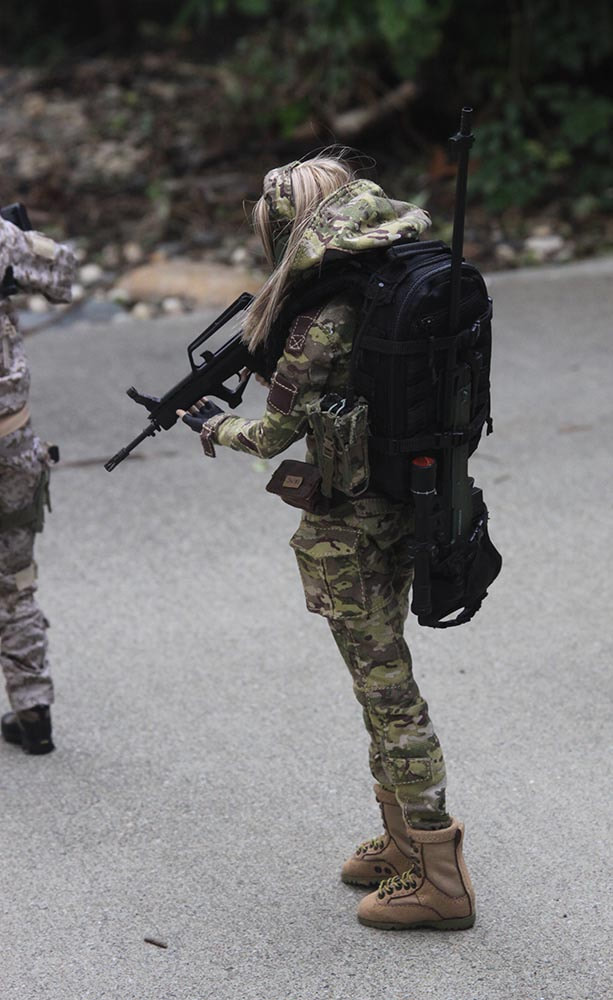 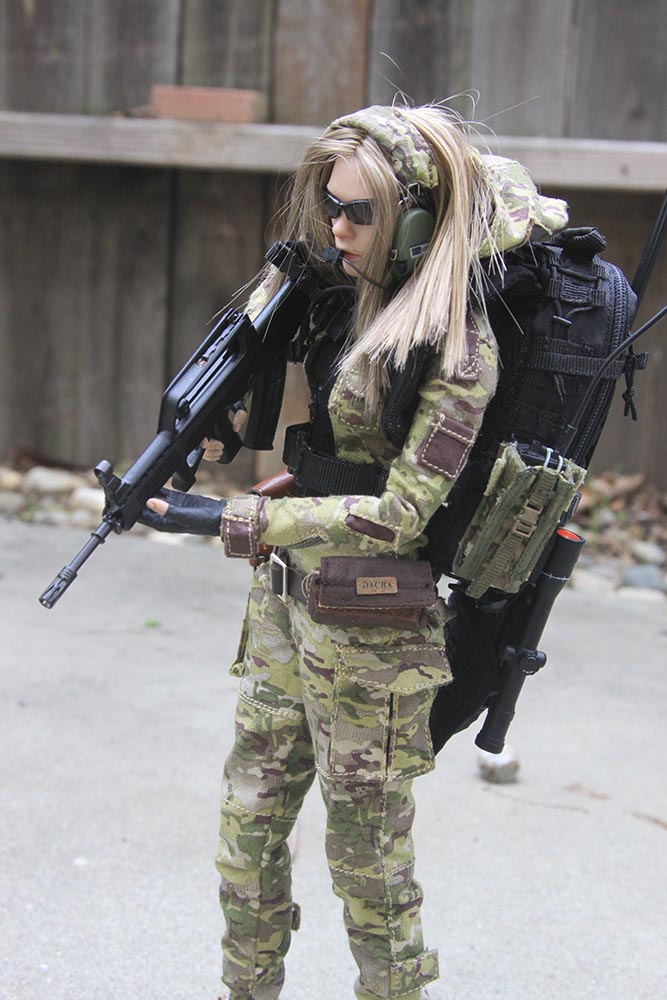 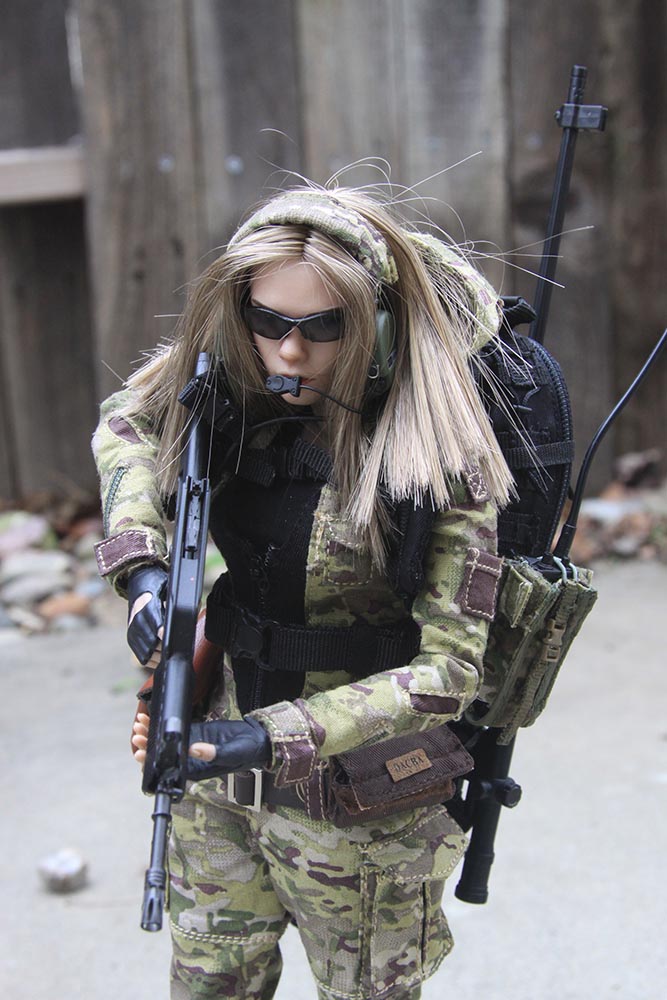 Villa is a sniper in my 1/6th world. She came with a pretty nice M4 and a nice day pack. I equipped her with this sniper pack and rifle. I think the sniper pack is from E&S, and the sniper rifle is from another VC figure set or possibly Flagset. Her secondary weapon is a QZ92 from Soldier Story. Along with the imaginative one piece camouflage uniform, I like that they used leather pouches and belt. 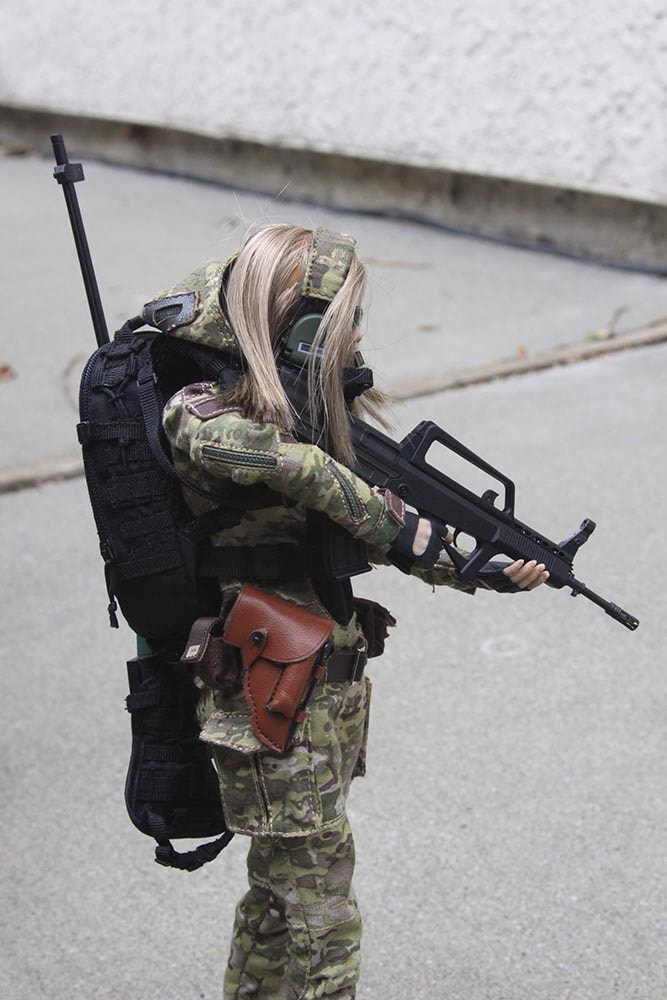 In keeping with the leather look of her gear, I chose a leather holster for her sidearm. It's a Russian automatic from DAM Toys or Soldier Story. It includes a spare clip. I'm not sure what the metal device on the front of the holster is for.

One of the cool accessories VC provided Villa with is a fairly large equipment box. It isn't something one would take with them on a patrol, but it makes a very neat diorama accessory. It's nicely weathered and has handles and other details including a foam insert that could be cut to hold equipment.

Villa considers herself the most skilled operator in the squad... 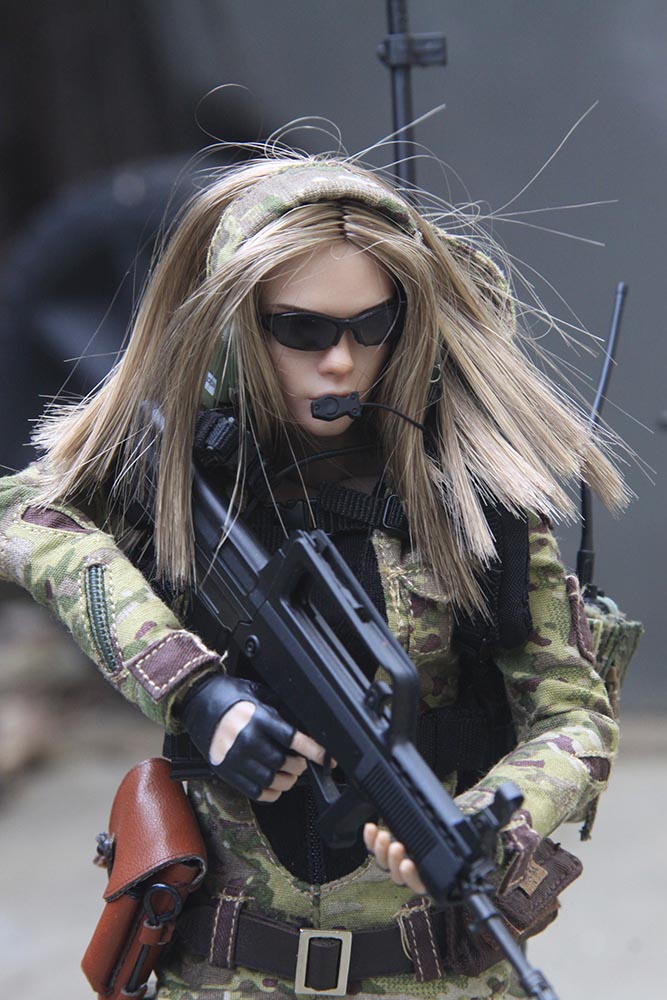 Of all my VC shooters, the next one is the most kitbashed. She's based on Very Cool's "Max", the only shooter that I passed on up to now. One of the big attractions of this series for me are the heads, and the one they used for Max didn't appeal to me at the time. I decided to use her uniform and equipment to build my own figure.  This is Emma Kwan, who takes the place of Max: 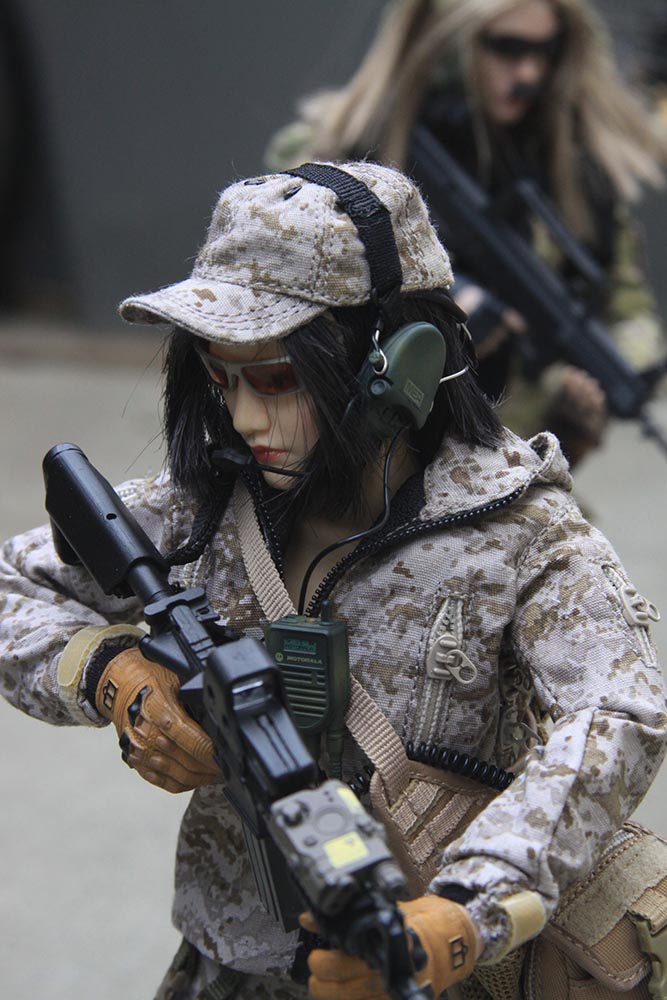 Emma uses a Phicen 4.0 head from their "Lady Magician" figure set, a Very Cool 3.0 body (the same one the other shooters use), and uniform and pouches from Max. Her sunglasses are from Soldier Story. 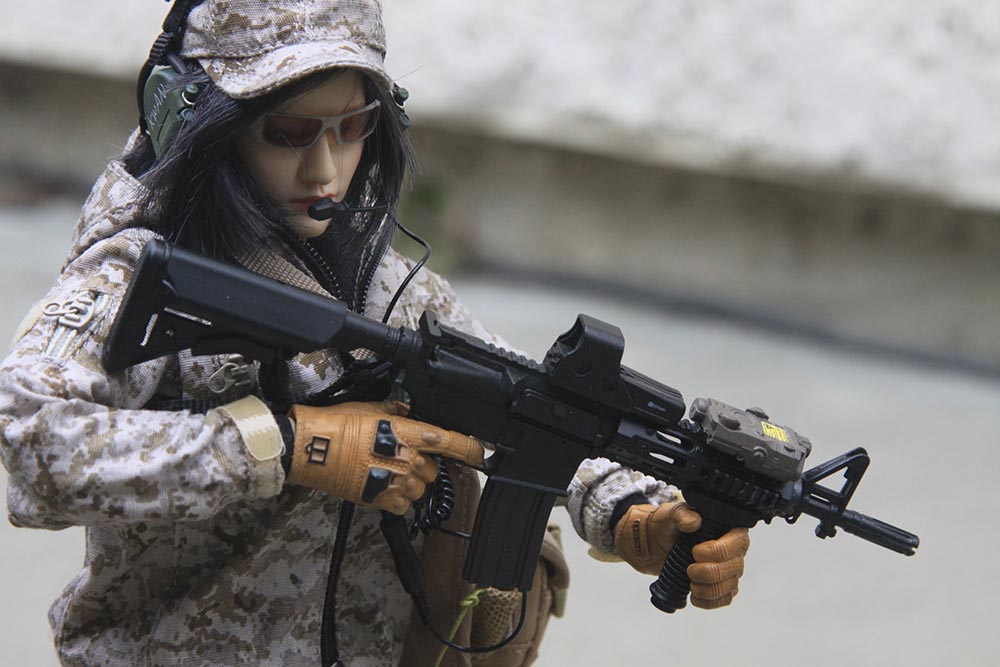 Her gloves are from DAM Toys Gemini (Vicky or Zona) and her weapon is from Easy and Simple. I can't remember the source for her radio and headset (that has "Kwan" written on the right earpiece). 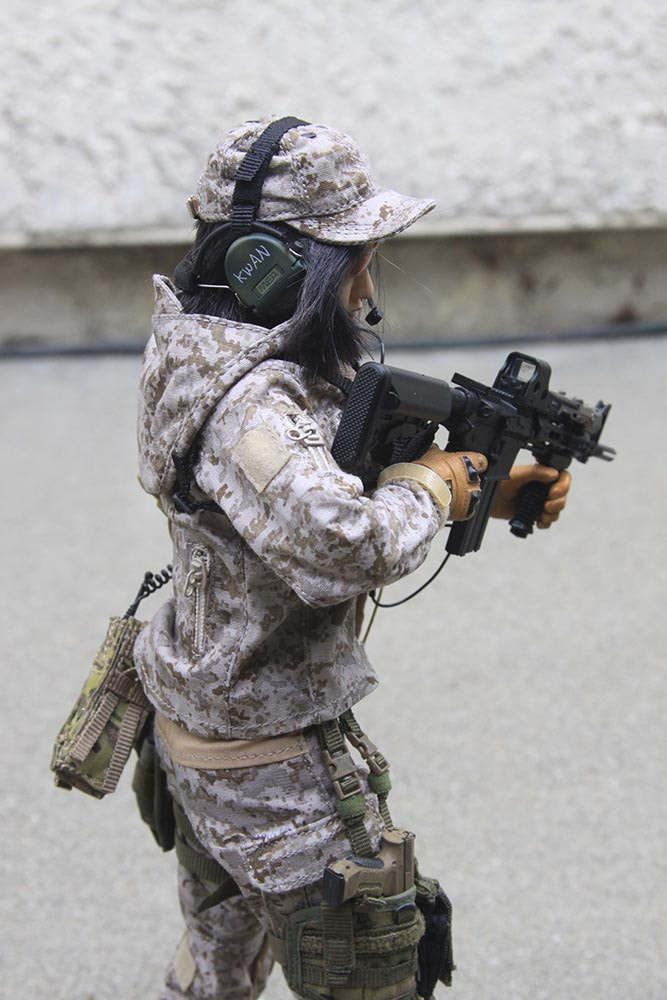 Her drop-down holster and side-arm are from DAM Toys Gemini, as well as the ammo pouch on her left leg.  I still need to get her a harness. 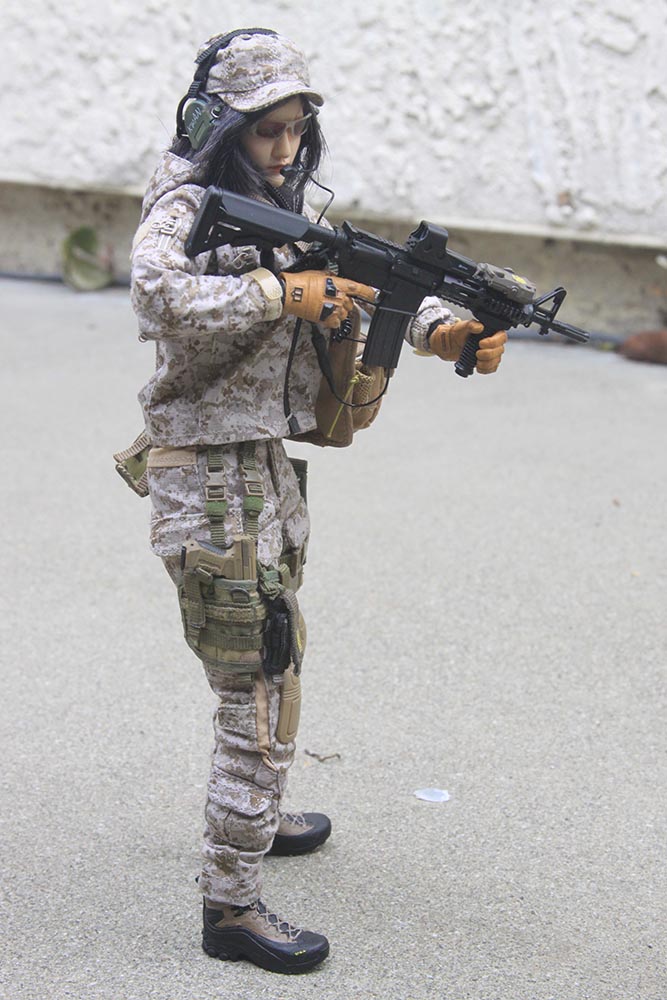 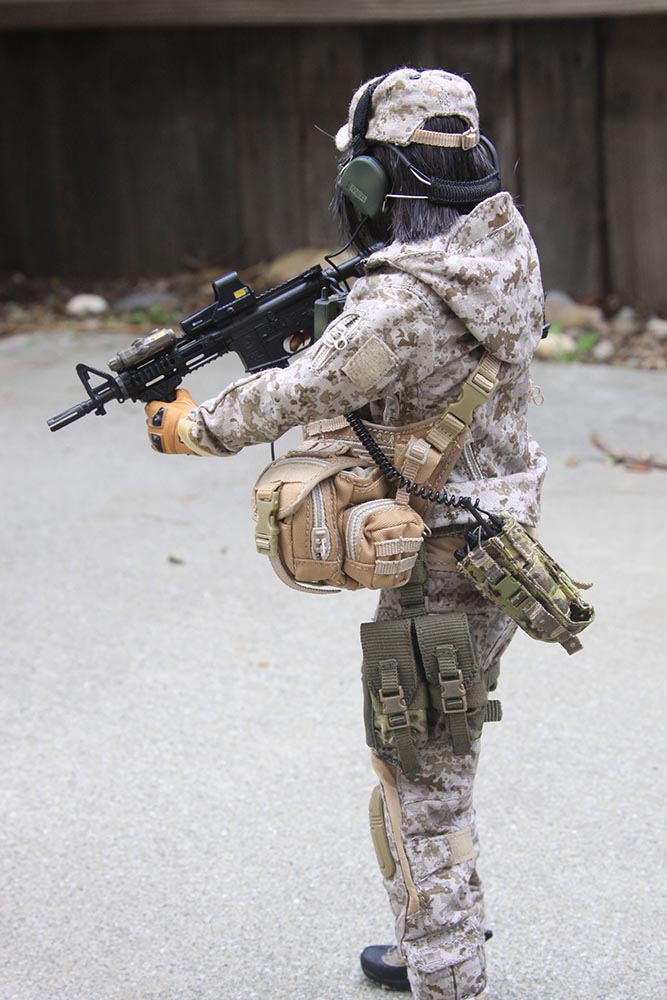 The boots I used for Max are boot-feet from a Fire Girl accessory set. Her shoulder pouch is from the Max figure.

The next figure is the squad leader. She is the black variant of the ACU camouflage figure: 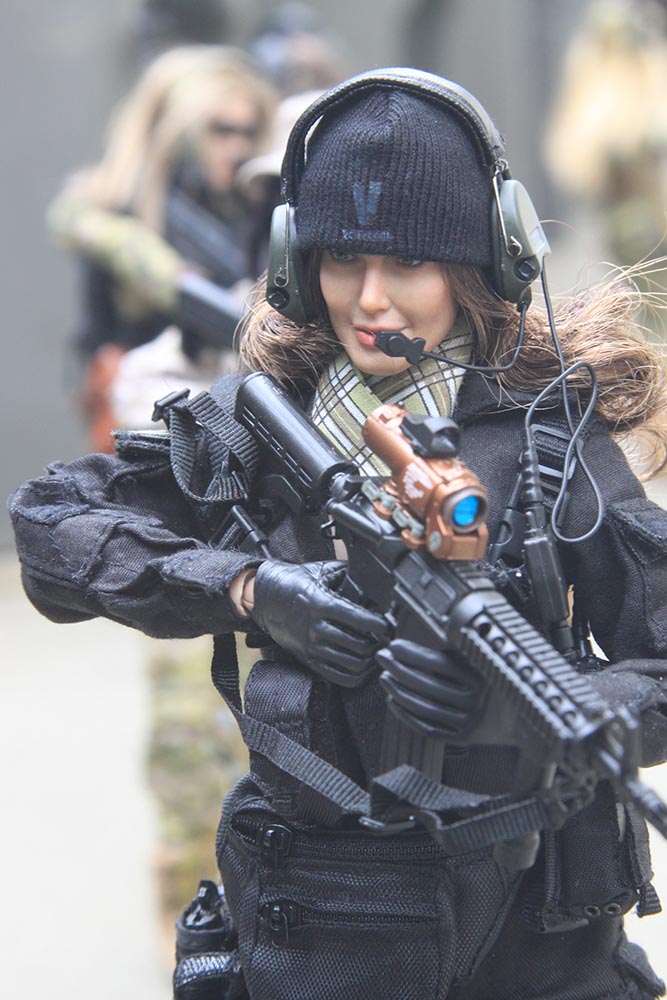 As you can see, this variant uses a completely different head sculpt from the ACU version. I will use this head on a different character but for now she's the senior member of this squad. She's pretty much equipped as she came in the box, though again I didn't use her backpack for these photos. Her scarf is from Villa. Her harness, which is difficult to see, is from Fire Girl. 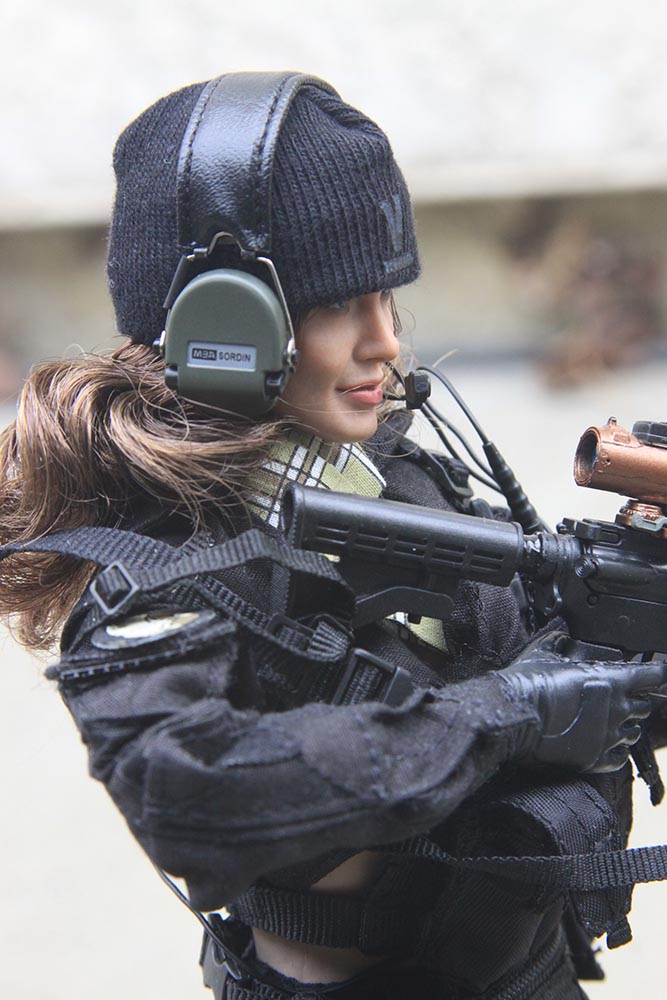 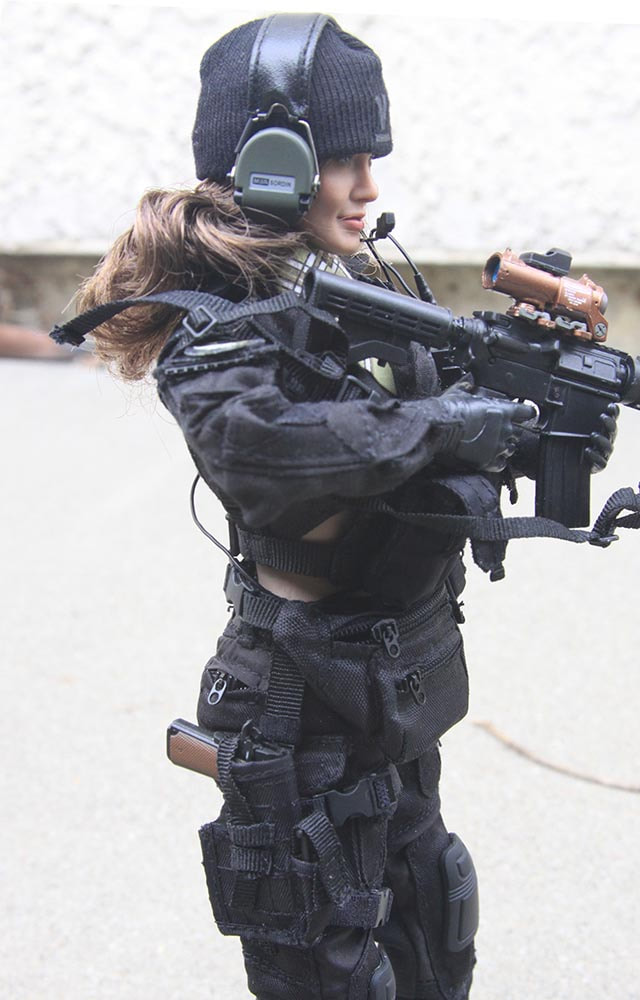 Just a quick note about her holster. This is the same unit the ACU figure has, and you can clearly see that one is defective in regard to the straps. This is the way the straps are supposed to work: one strap without Velcro to secure the automatic, and a separate one with Velcro for the clip in the front.

And that pretty much sums up the status of my Very Cool shooters so far- but they're always subject to change! 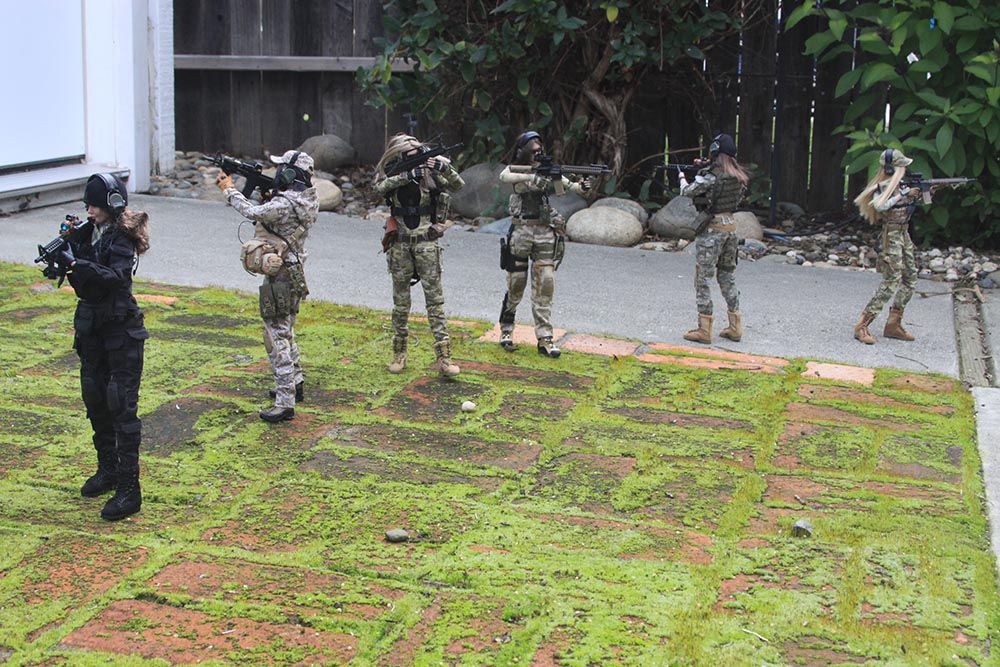