I read about these "seamless stocking" sets when they were up for pre-order a few months ago. The write-up mentioned that Fire Girl Toys had developed a new way of making stockings so that they would be seamless.  All scale stockings I've seen have seams, and sometimes they're not very attractive. They can also result in a big clump of fabric at the toes, complicating the fit of shoes.

One reputable vendor that I do a lot of business with even mentioned that the stockings are "no stain" (but that they would not be responsible for any resulting stains) after 24 hours of use. This claim for me was the clincher- I purchased them parted out to put them to the test.

It also turns out that Fire Girl sells these as accessories as well as other styles and colors of hose.

The brave tester for this project is a recently acquired TBL S21B that I purchased used on eBay.  I decided to test these fishnets over a 24 hour period, since that was the limitation the vendor had mentioned.

Before donning the stockings, I decided that a before photo would be helpful in assessing any stains. 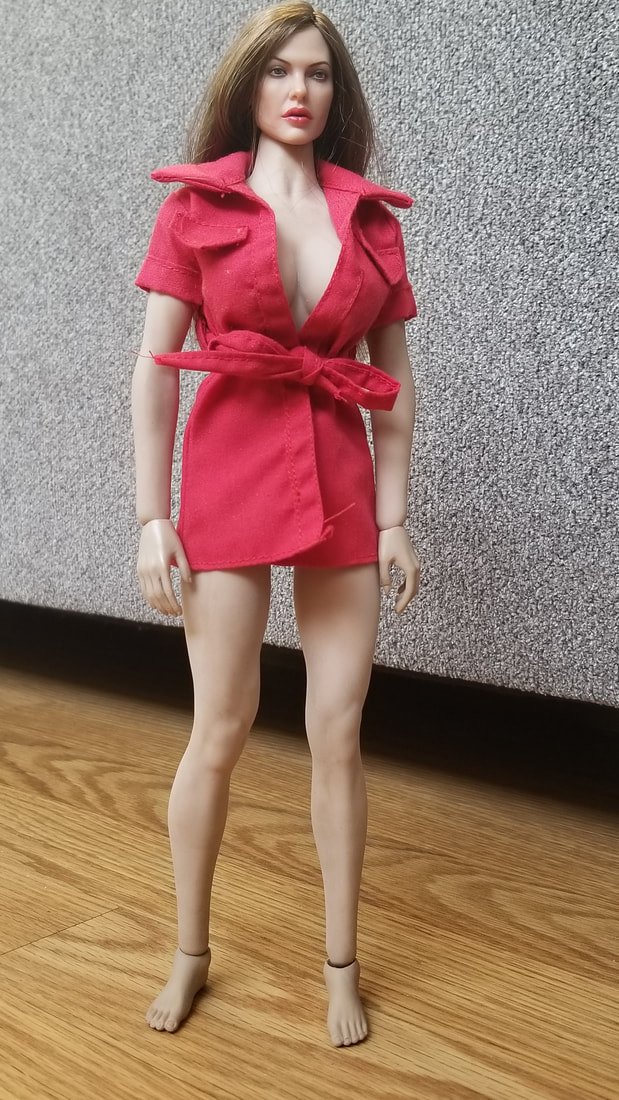 I can't seem to stop at one, besides more views would be even more helpful. 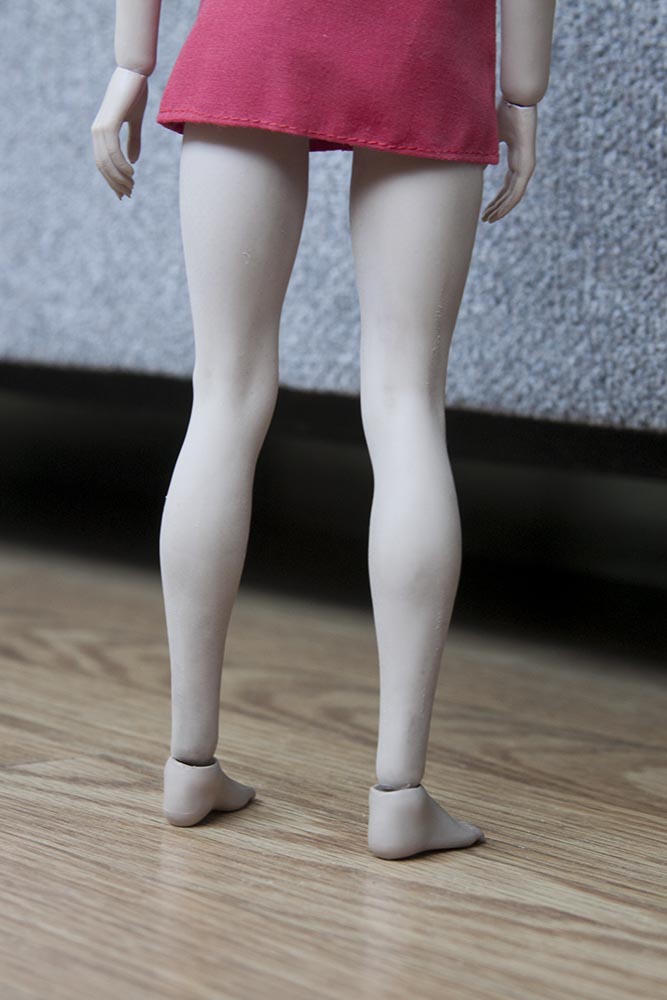 Keep in mind this is a used body. It arrived wearing white lace hose, but as a used body, it's been handled and what kinds of clothing it has worn is anyone's guess. Her legs were nicely powdered with talc so the owner did show some care.

I decided to show what the stockings look like out of the package. They don't look like any others I have as they look really small. As it turns out, they're really stretchy. 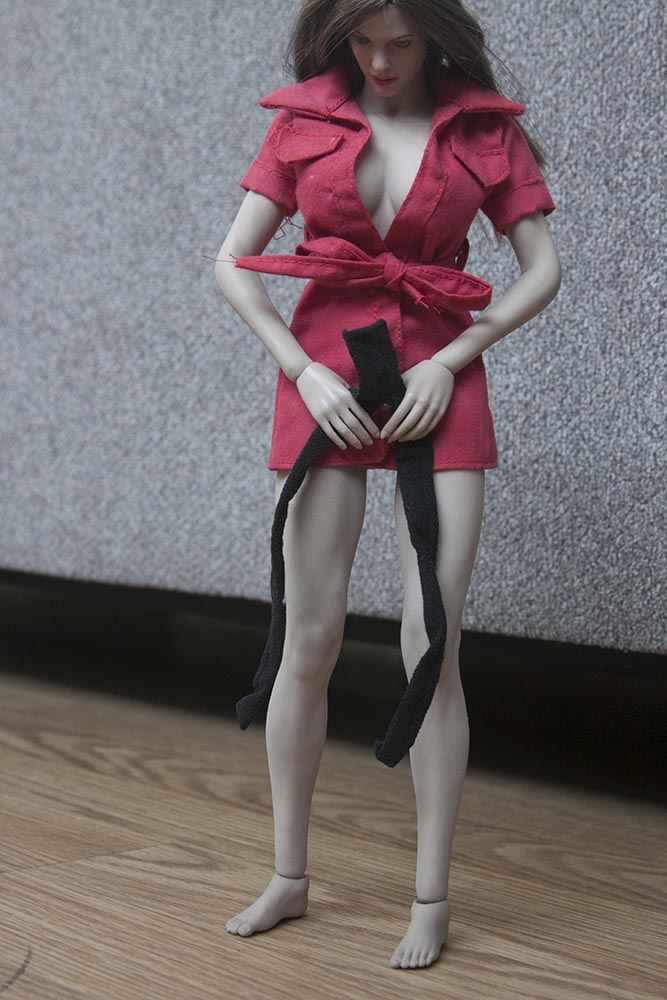 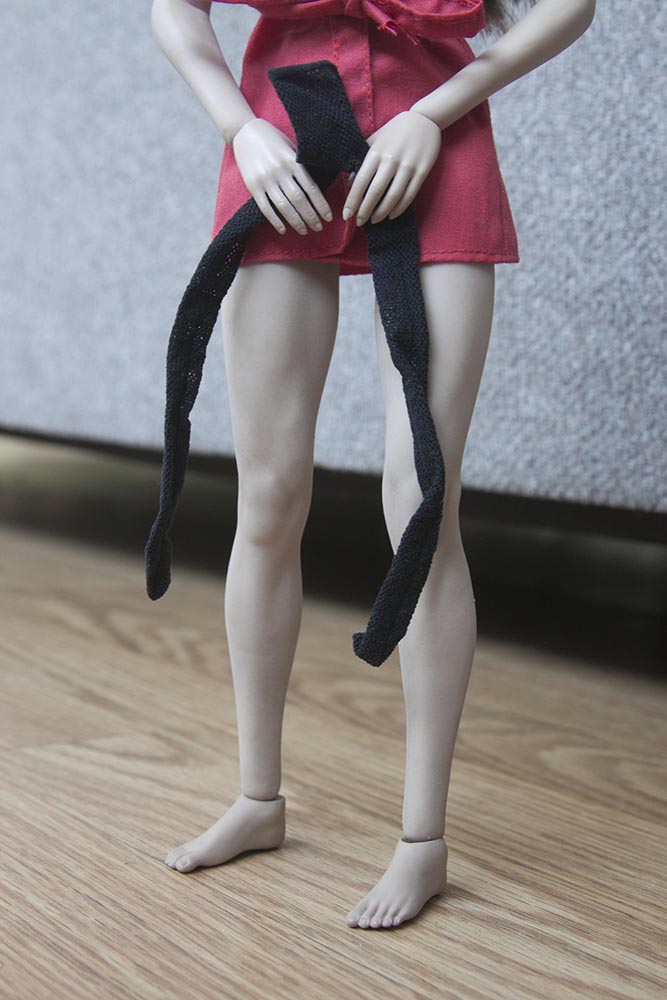 Okay, let's go to a more private place to put them on. 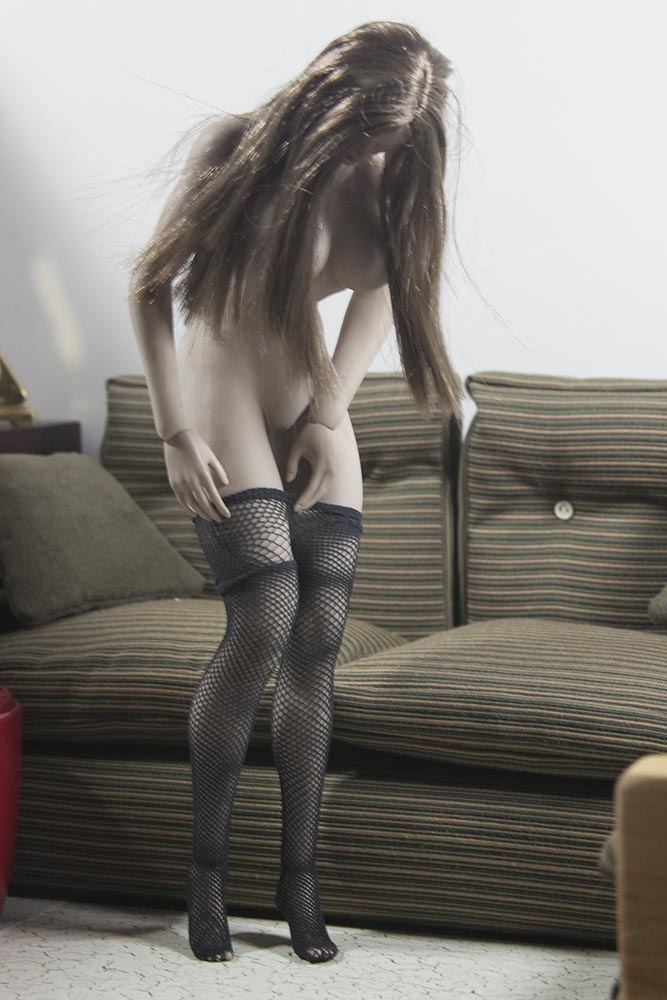 I have to admit, they looked so small, I thought they would never fit. They're so stretchy, it wasn't that difficult. Before starting the process, I did apply a good covering of talc to her legs, lower torso and waist. I would also recommend putting some on her feet. Experience has shown that the flexible plastic the feet are made of are prone to stains, especially as they get squeezed into shoes. It was after I had gotten about this far that  I thought of her feet.

Basically it's a process of carefully pulling the stockings up her legs. I would pull them into a bunch, then pull them up from there. One thing I became aware of is the tendency to twist them, causing a swirl pattern in the fishnet. I don't find that particularly attractive so I spent an extra bit of time getting the stockings to look more uniform. This wasn't a difficult process, and I never felt that the material would cut into the figure's skin.  This has been a concern with some really tight fitting garments that have mesh panels.

Here she is more or less in her new stockings. I still found myself occasionally tweeking them a bit to make them look more uniform. 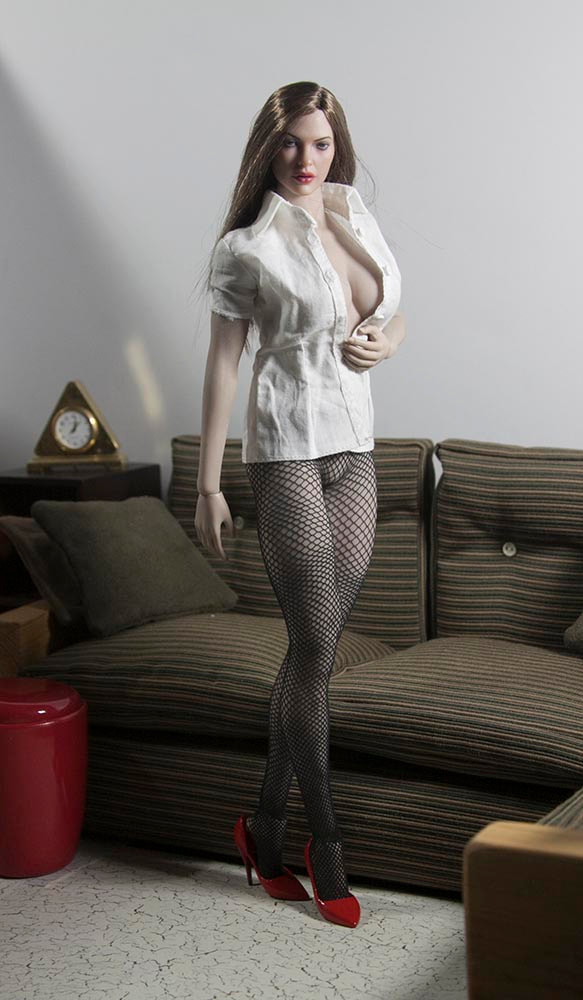 If you look closely, you'll see that I still have swirl patterns at this stage so a bit more tweeking...

I have to say they look really nice! Not only that, they fit her literally like a second skin. There is no bunching up as she moves and poses. In fact, there is no restriction of her range of motion at all. 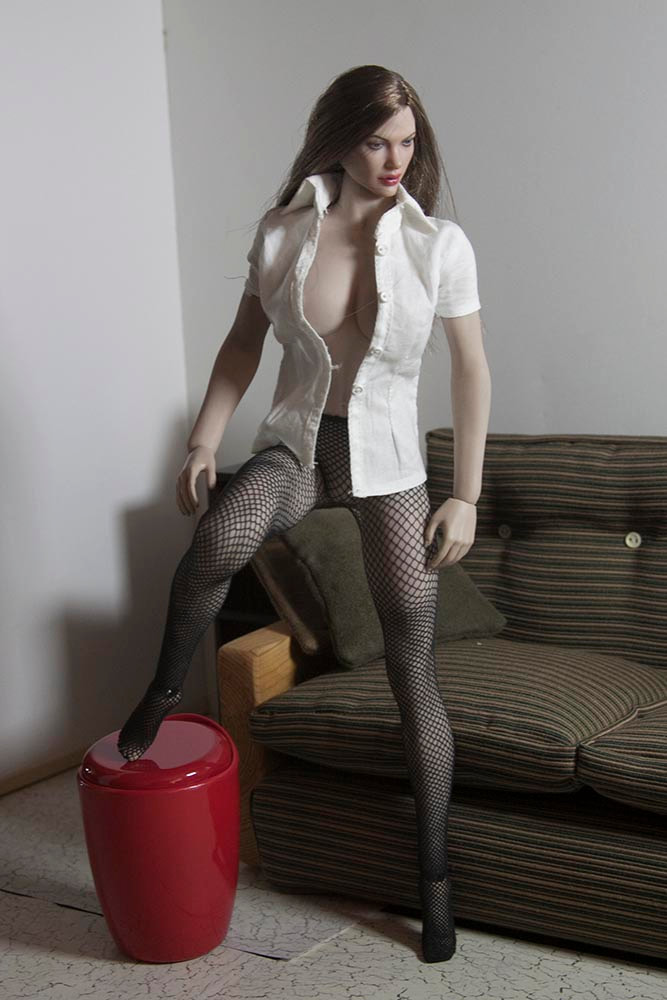 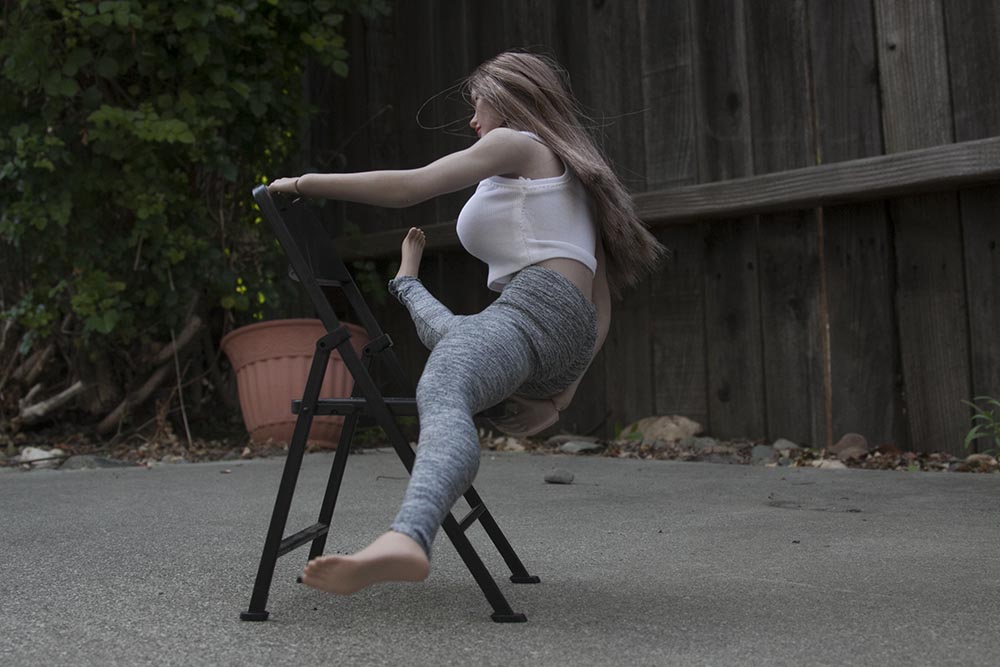 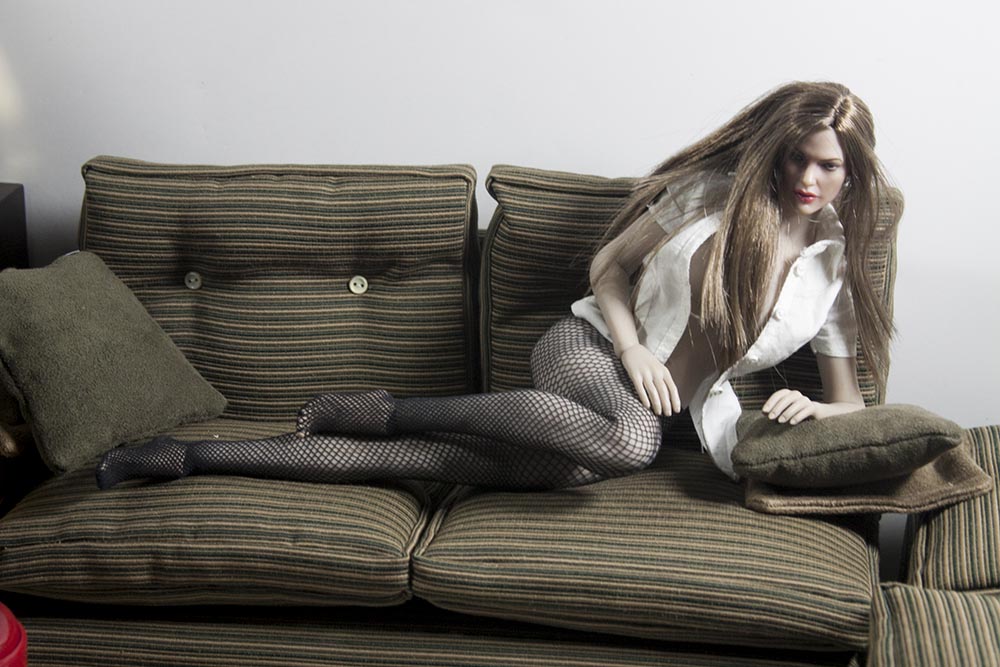 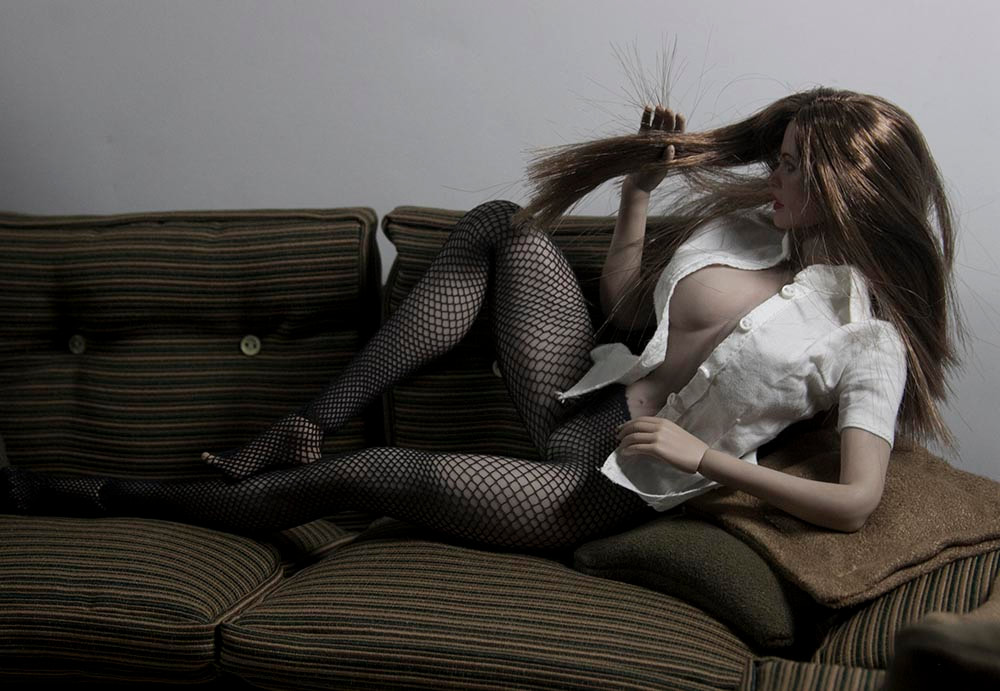 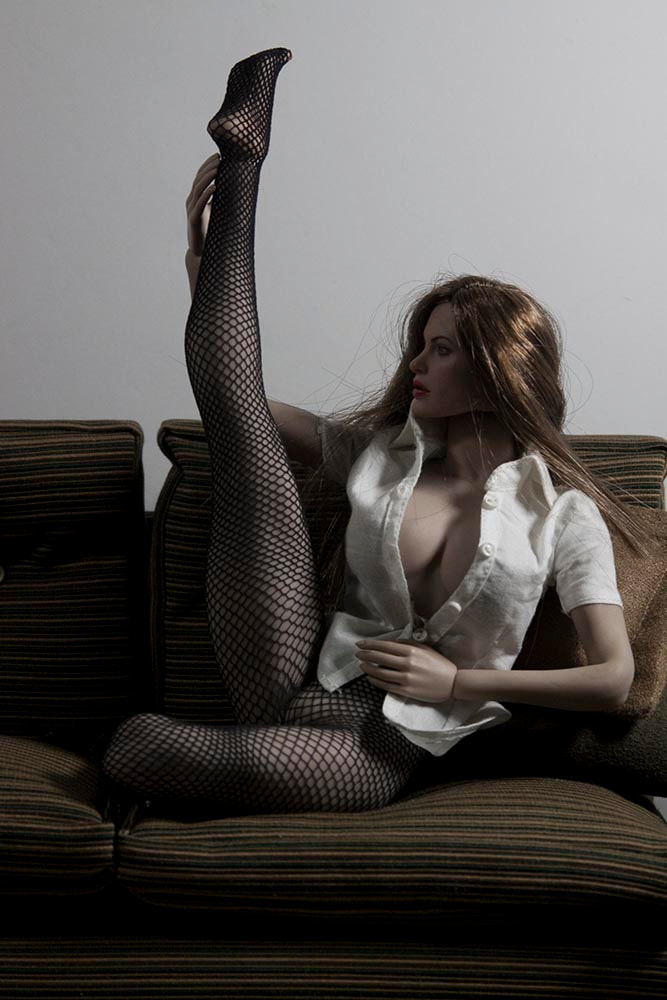 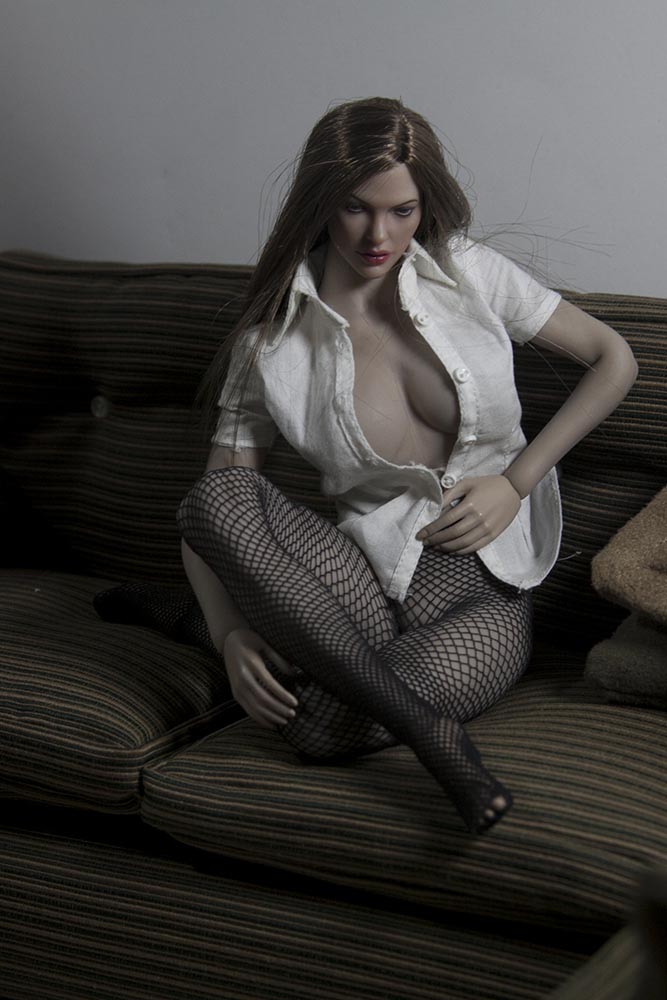 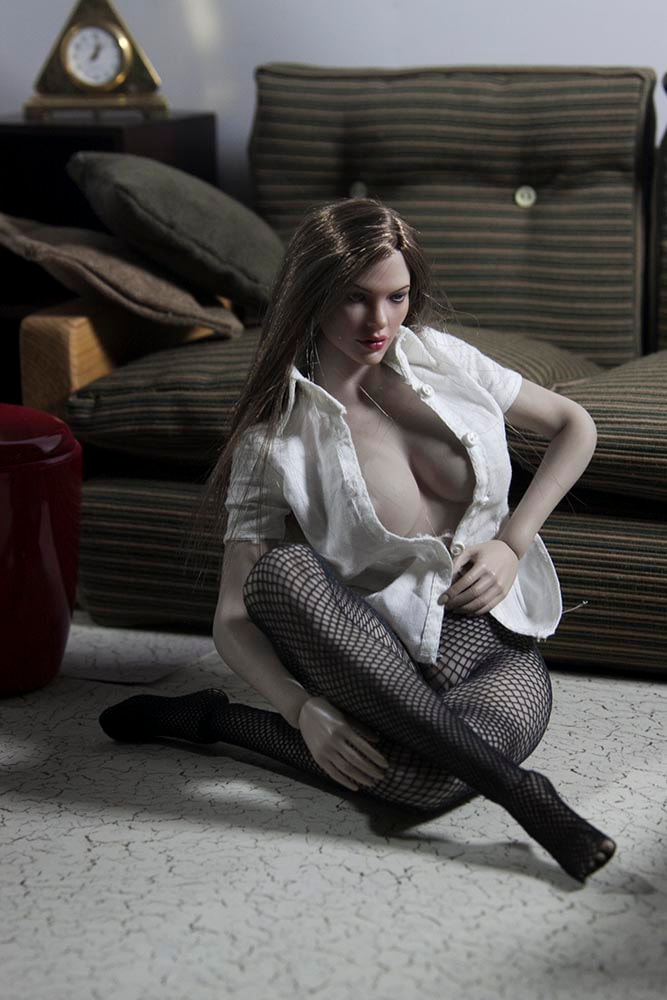 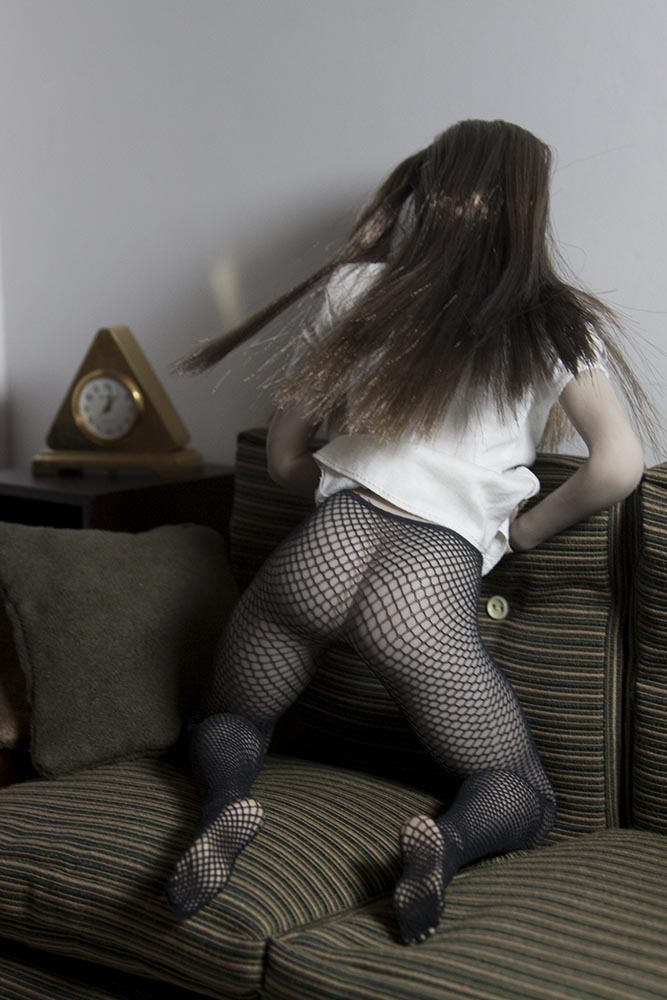 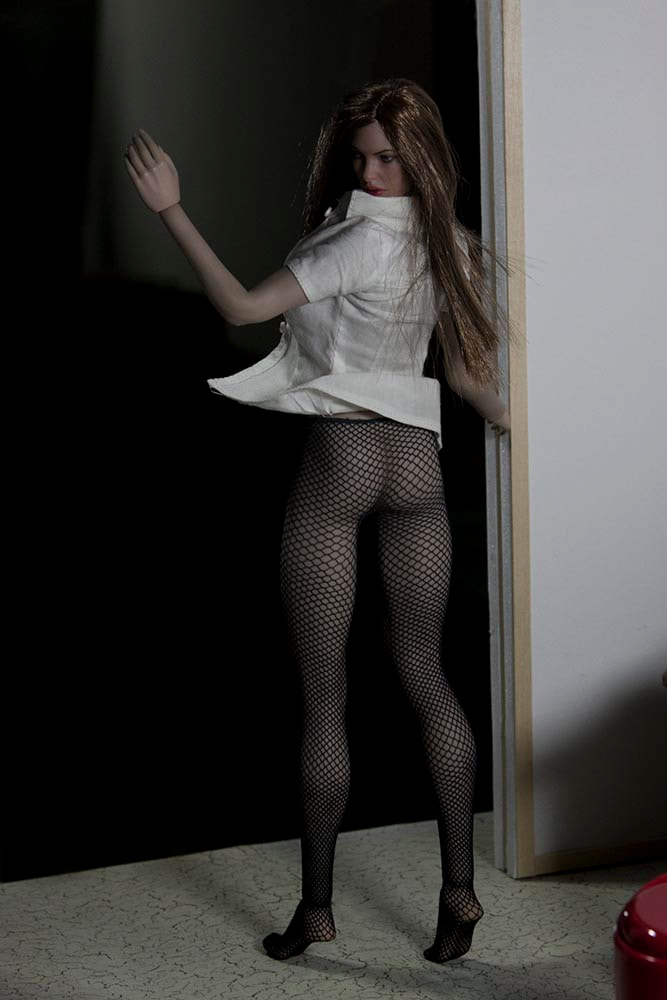 As you can see, no seams in the back! At this point, she'll keep them on for the 24 hour test. We'll meet up with her tomorrow to see the results. 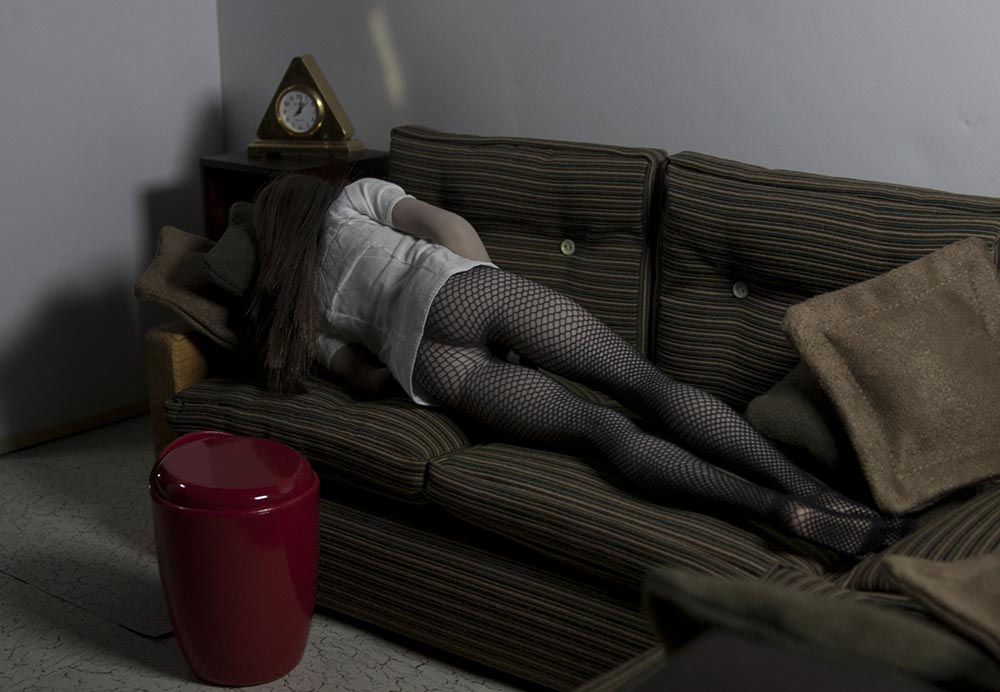 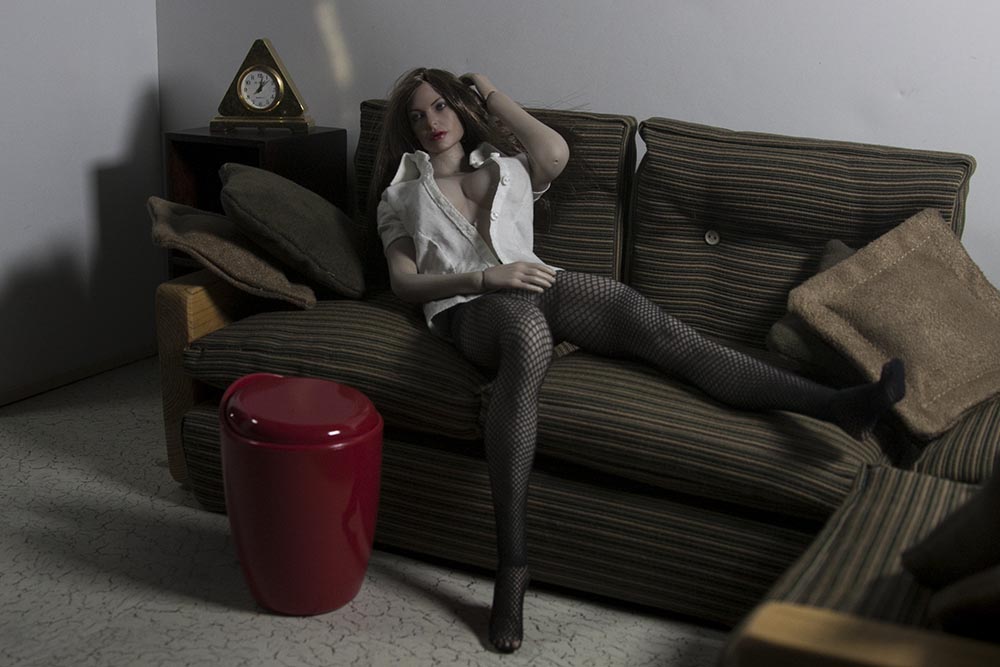 Yes, I realize you like them, but this is a test, remember? We have to stay within strict parameters to achieve scientific results we can draw conclusions from... Yes, I've listened to Covid19 briefings... 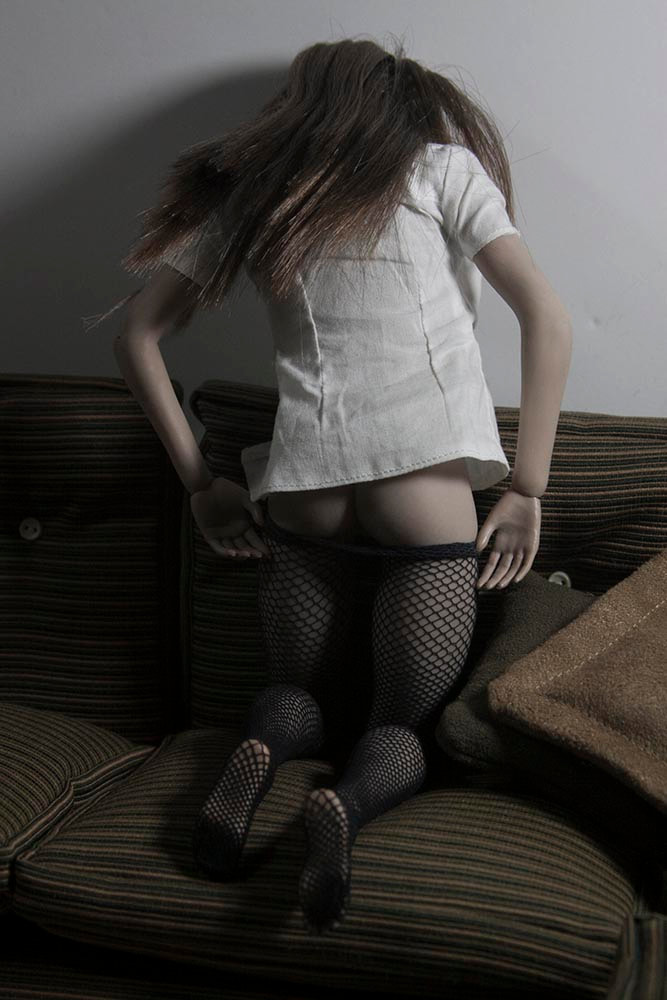 So far no stains on her waist where it was in contact with the elastic (nor was there an indentation in her skin).  In the past I've seen stains from elastic.

As you can see, it's not very difficult to remove them. Maybe because they've stretched a bit. 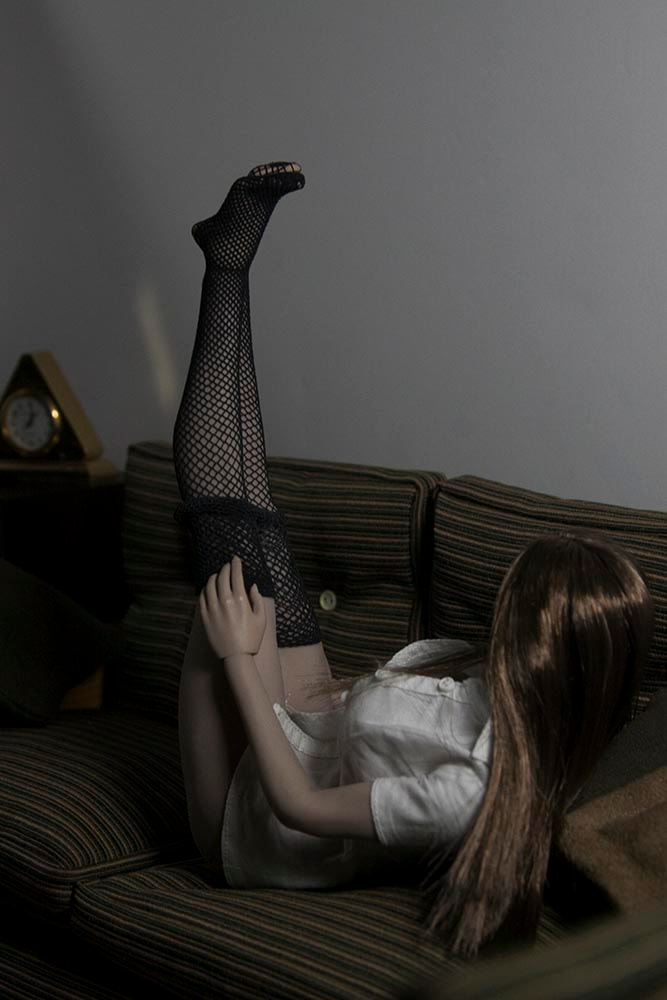 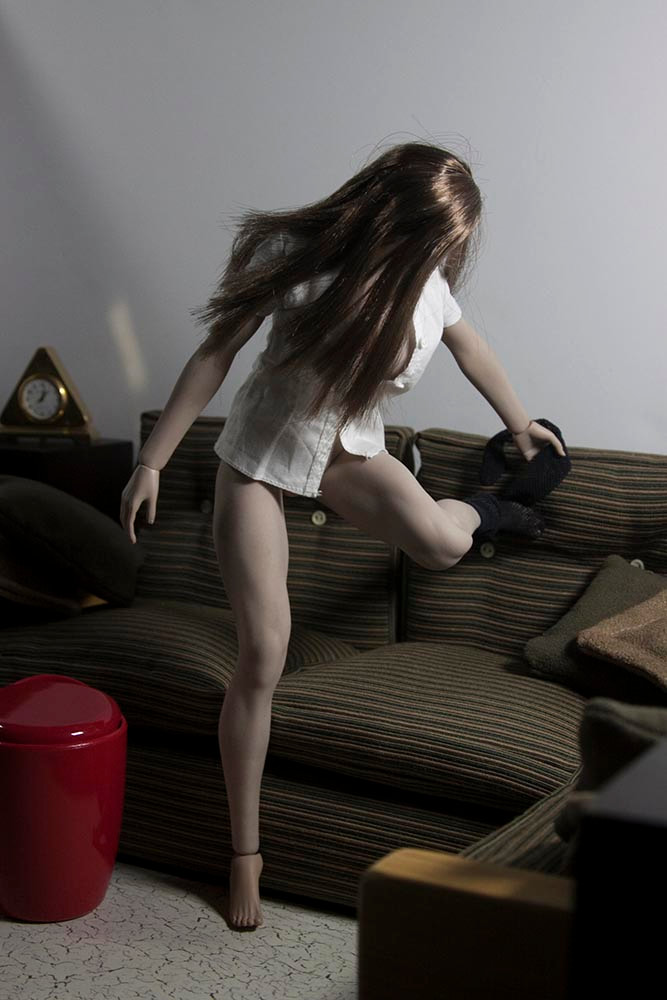 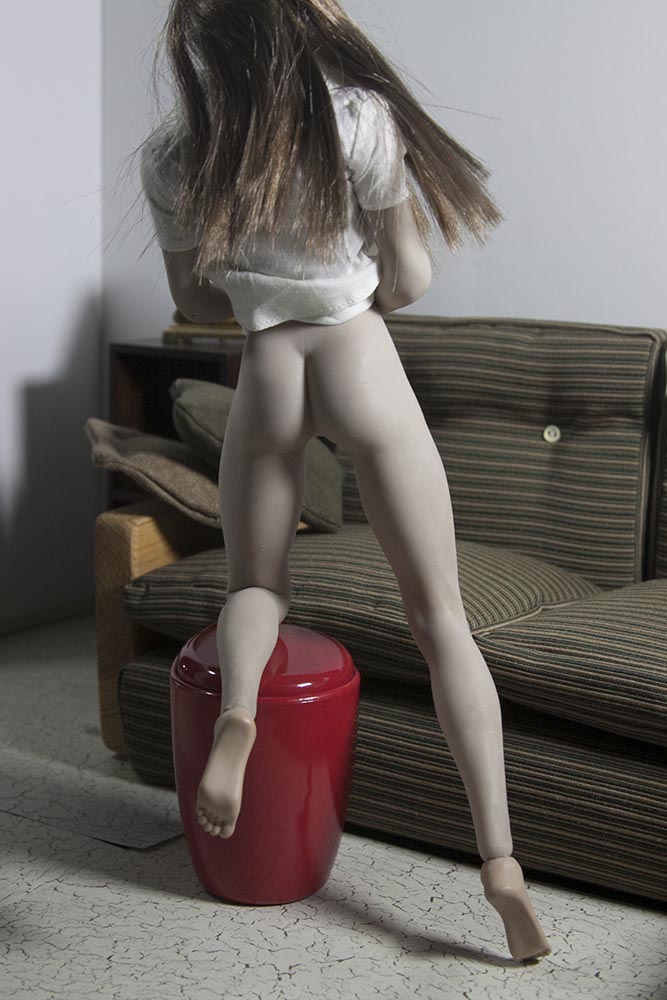 No stains from this angle! Even her feet don't show any stains. A little closer look at her feet and lower legs- where I've seen stains before. There's some really mild darkening, which I've tried to accentuate in post processing, but I think this is pretty much what we started with. It might even be lint or the result of handling. 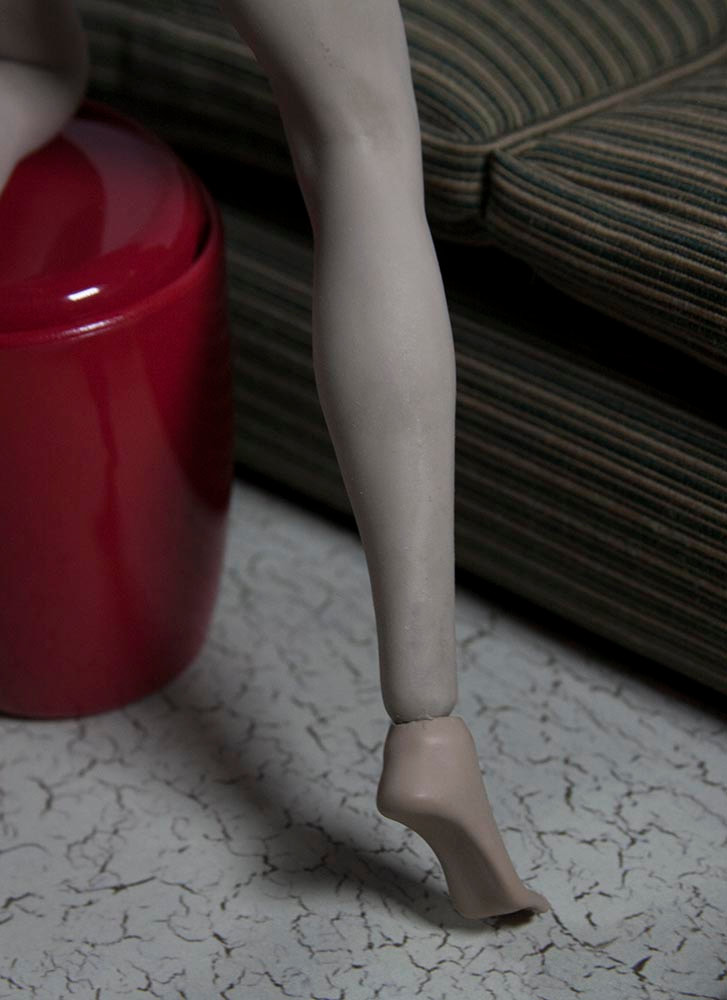 Here's a bit of a close-up of her thigh: 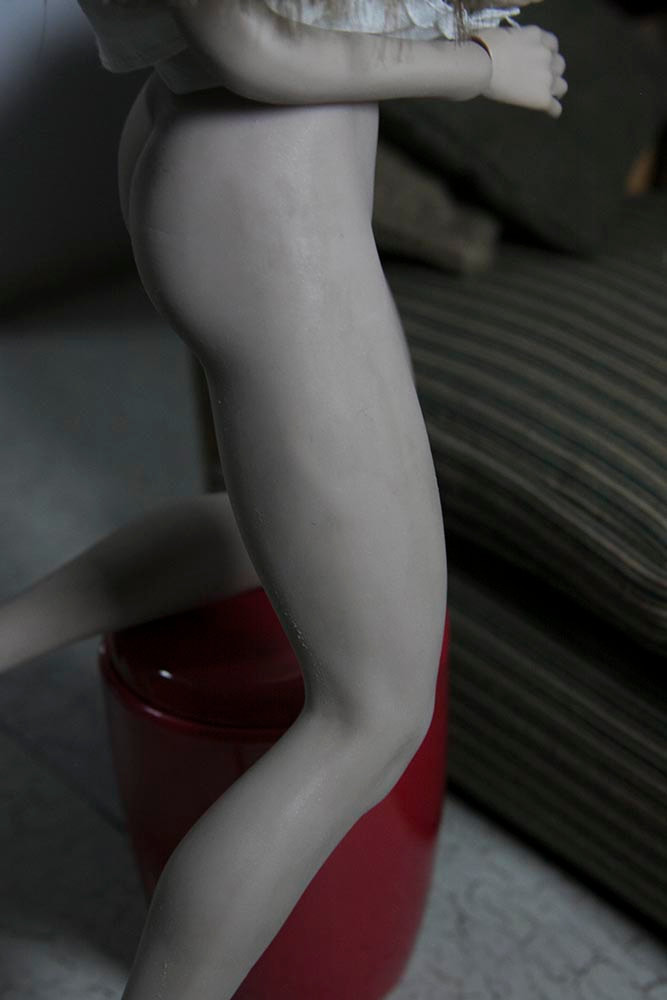 I'm going to say that any faint darkening here is existing, and not a result of the fishnets. I realize the before and after are taken under very different lighting so the results might be  a bit interpretive yet I'm still saying no stains found. Even an overall view looks the same as how we started. 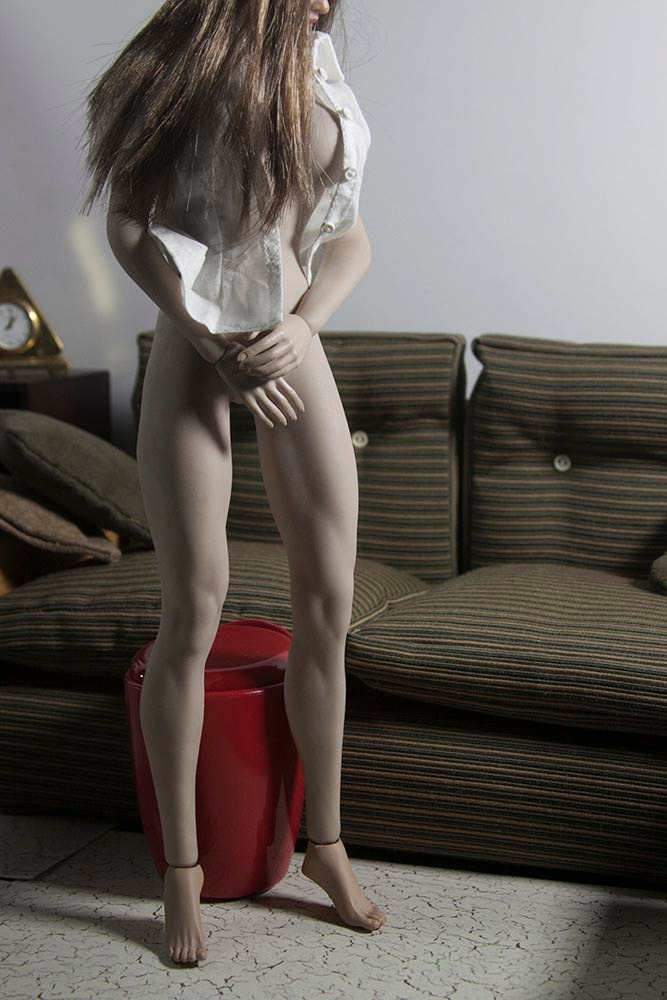 I'm really pleased with these fishnets!  Not only do they look really good, they're relatively easy to put on (even on a TBL S21B), and they don't stain.

Uh, yes, you can leave to get dressed, and thanks for volunteering! 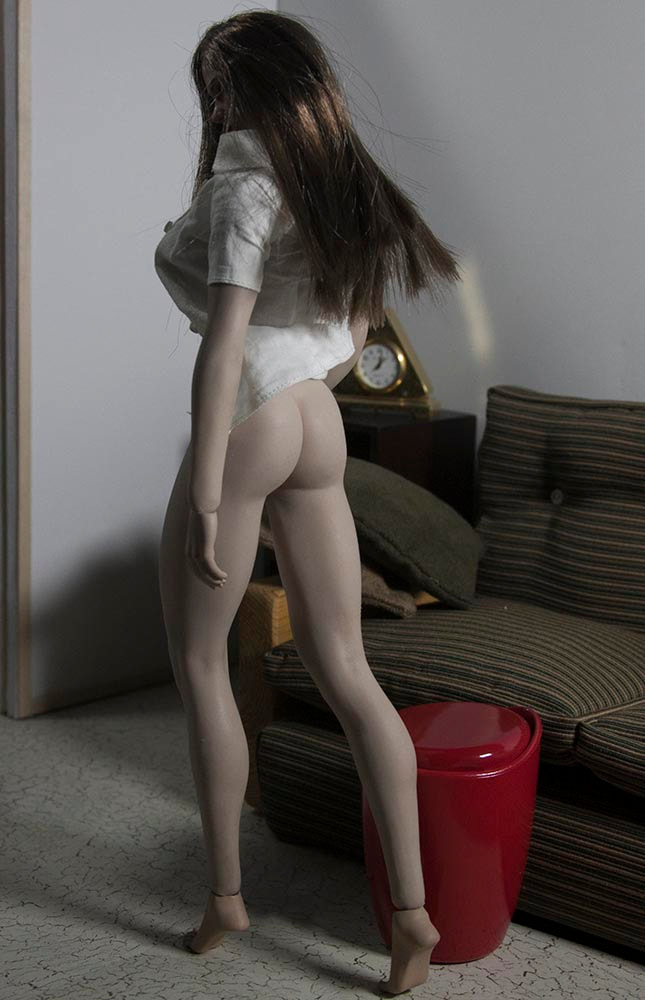 ...As I was saying- I think Fire Girl is on to something with this new design. I'm looking forward to trying some of the other types they make; I'll buy them in the stand-alone sets.

She's back to show you what the stockings look like now that she's worn them: 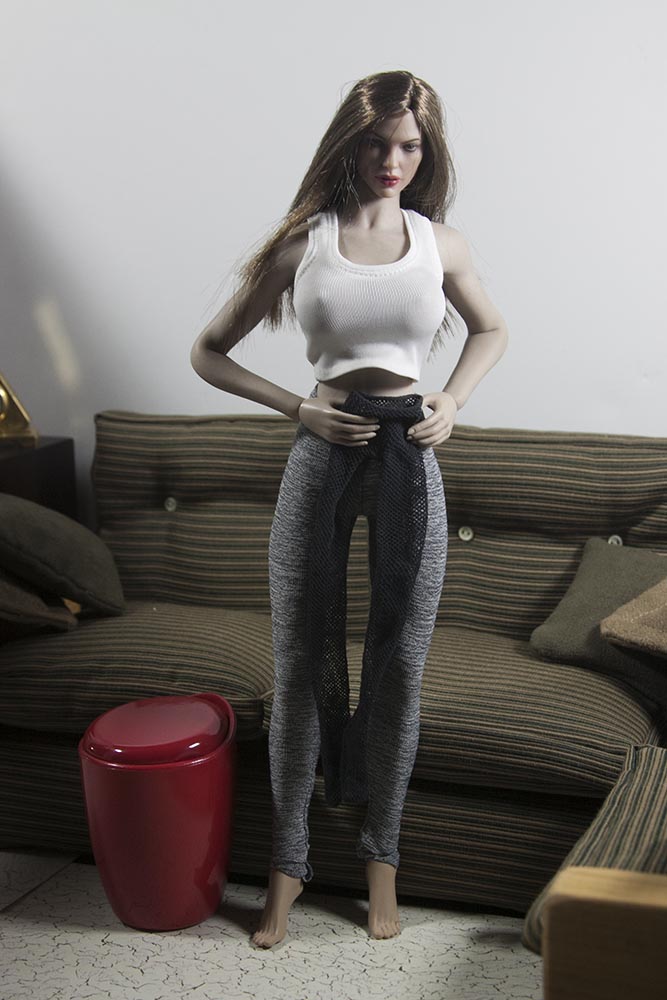 Compare this to the photo near the top of what they looked like when we started out. I bet they'll go on more easily now.