M32: "Asian" build body, designed for martial arts customs, yet "standard" height. Very defined muscles, yet not as built as the M30.

M33: The subject of this review


M33, though muscular is not as massive as M34. I don't like posing bodies without heads (these are all headless bodies). As an expedient, I used this clone of a Hot Toys head sculpt. The head seemed to sit high on the TBL neck post. As I show later, it does actually sit very nicely on the neck post without any modification. Here's what he looks like: 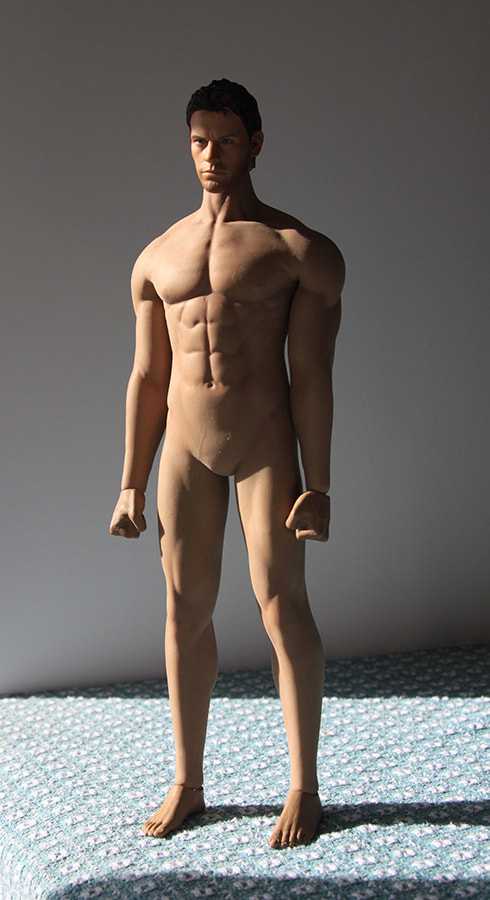 This body has the parts to make him anatomically accurate. Just as with M30, three accessories are included to accomplish this. More about that later... 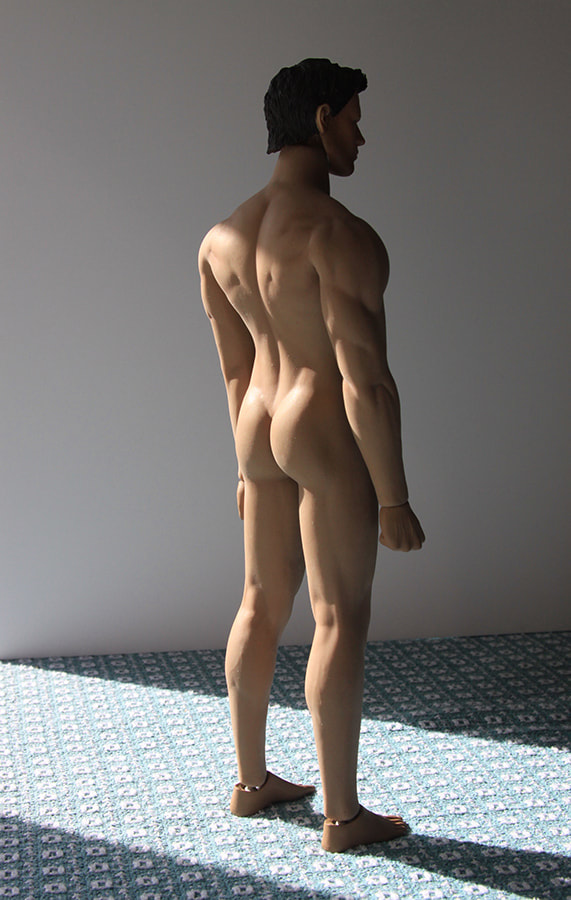 As you can see, TBL sculpts very nice muscles. What separates them from most other companies, is they take the time to create subtle surface texture, and veins. I really like how they did this with M30, and they did the same for M33. These bodies really come alive in light. 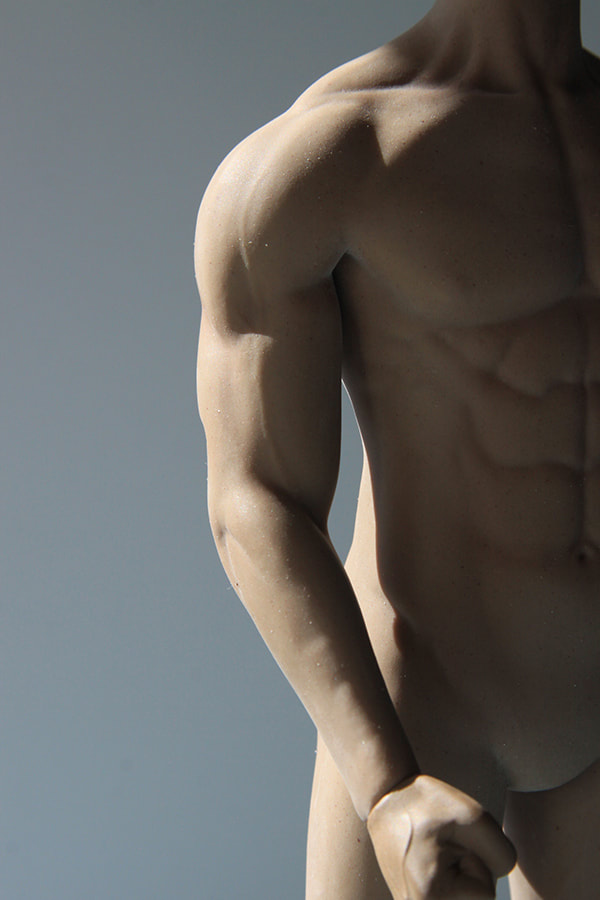 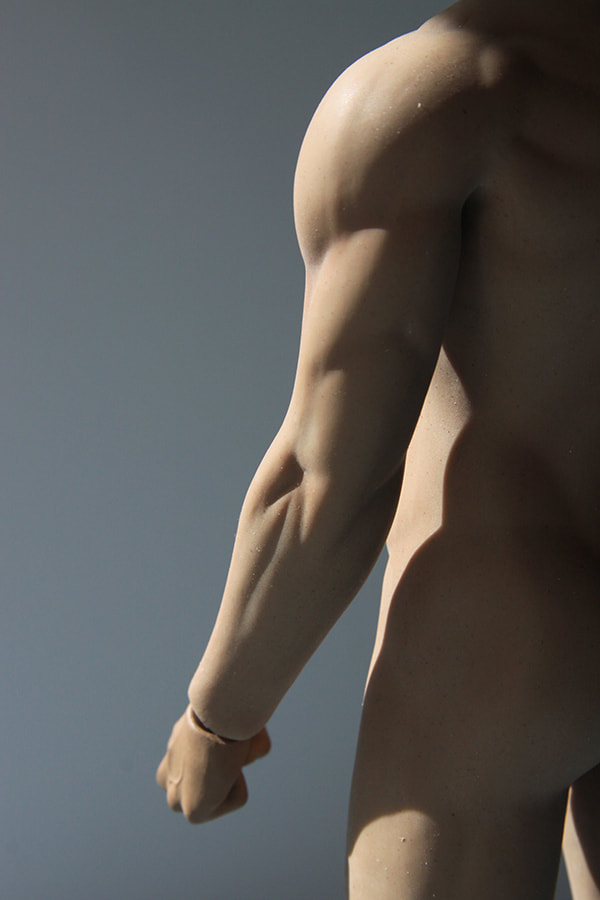 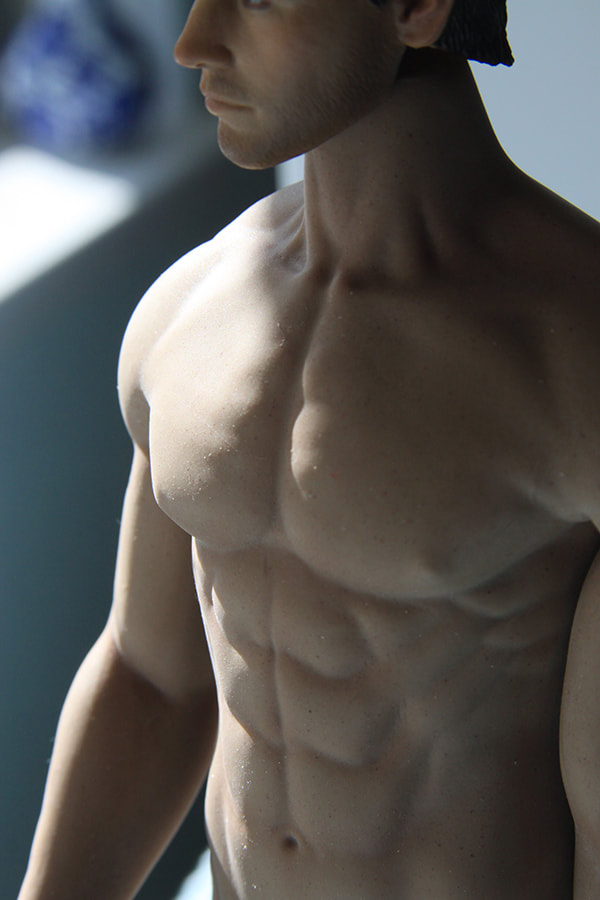 He may be very muscular, but he still has excellent range of motion, and is very sturdy on his feet. He is actually standing on a tablecloth in these photos. 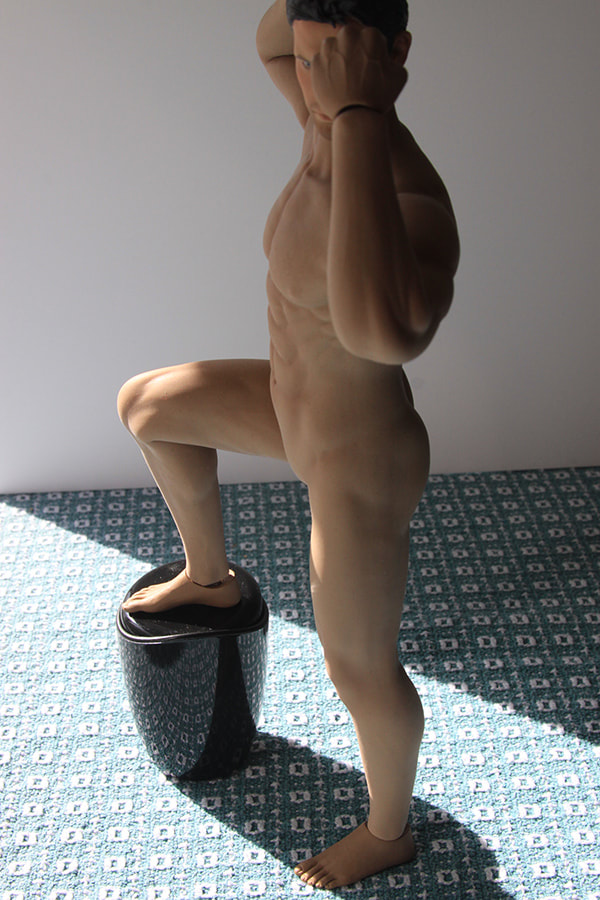 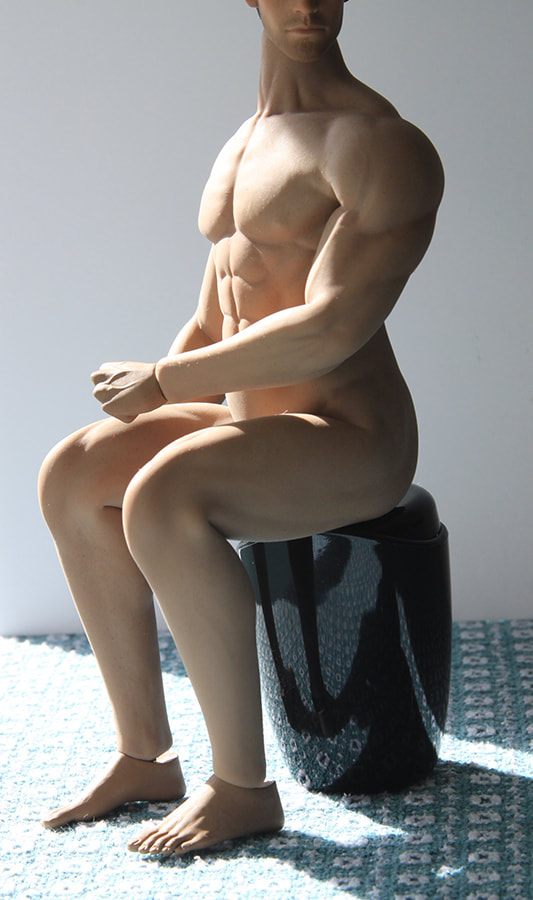 I have always felt that a figure should be able to do basic poses at a minimum. Things like sitting, talking on a phone, kneeling, for example. M33 can do these just as well as M30. 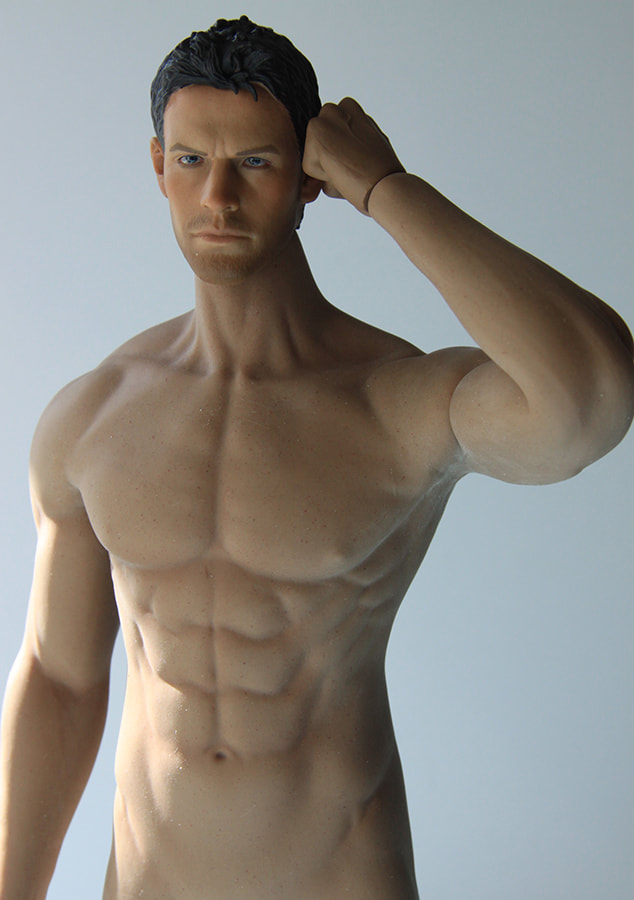 More "dynamic" poses are easy for him as well: 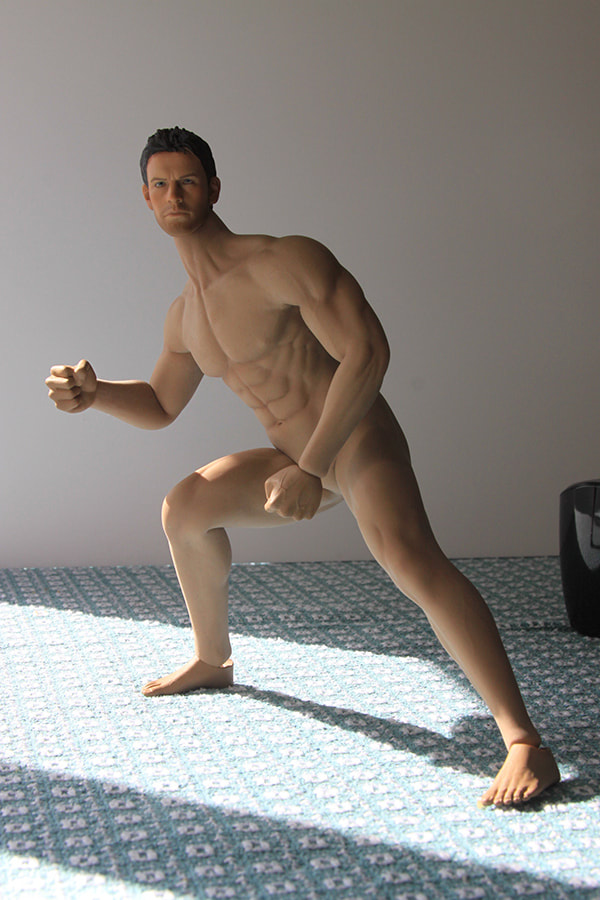 Uh, yes, I didn't have his head seated well at all!

Here's how he compares in height to M30 and a TBL female figure. Everyone is standing using non-arched feet: 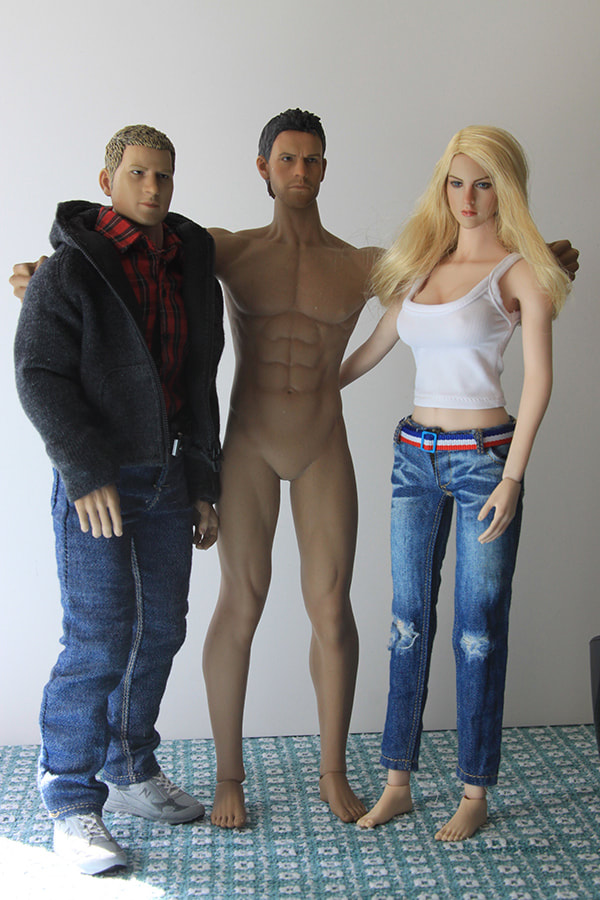 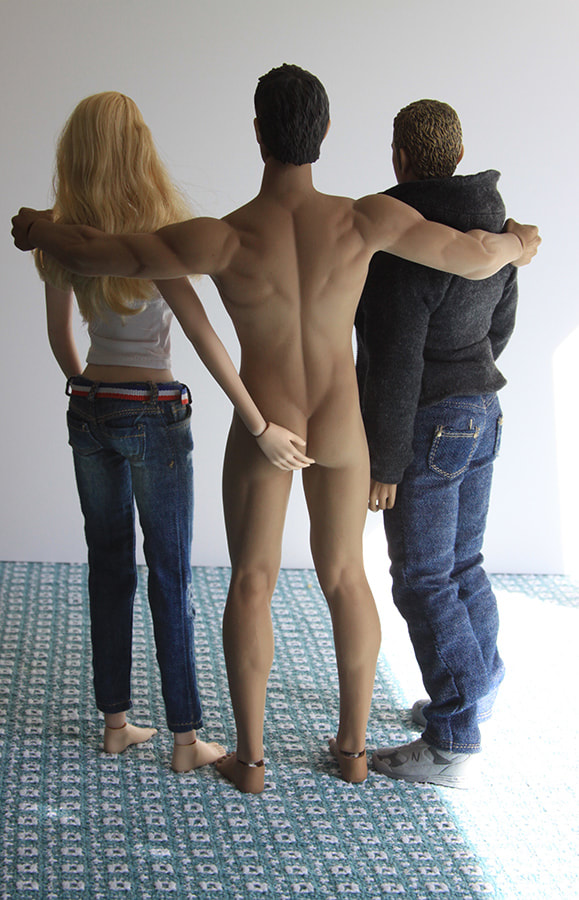 Here's a look at what is included with this figure. Two additional pairs of hands (and notice that none are "shooting" hands- you'll have to source those from another HT style figure). The items next to the hands are height extenders that the figure's ankles plug into. These would then plug into his feet or "boot feet". I don't know if this is the first use of these by TBL; they weren't included with M30. It might be interesting to see if they could be used to make M30 taller. 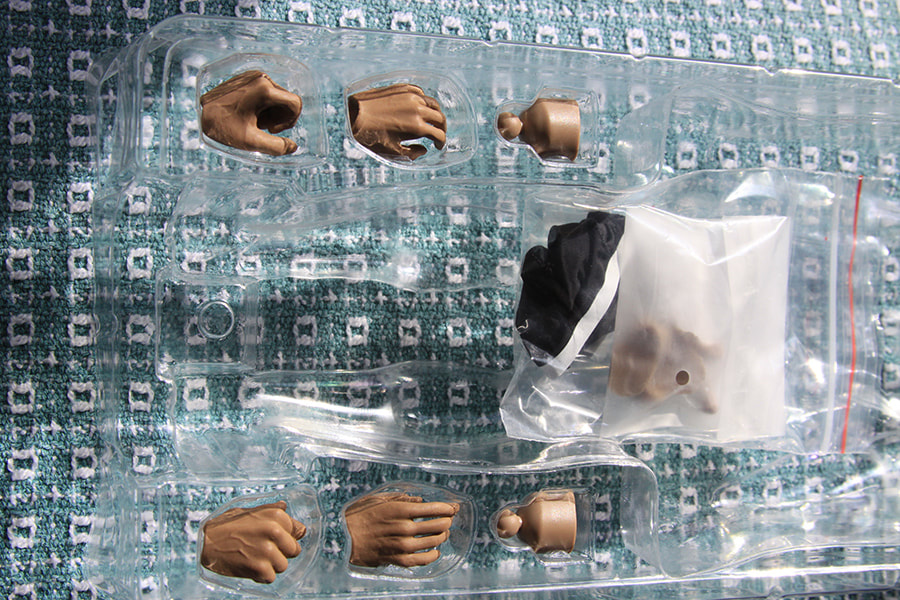 The other bag contains his male anatomy. These work the same way as the ones included with M30. They're held in place by the silicone parts sticking to the silicone body. 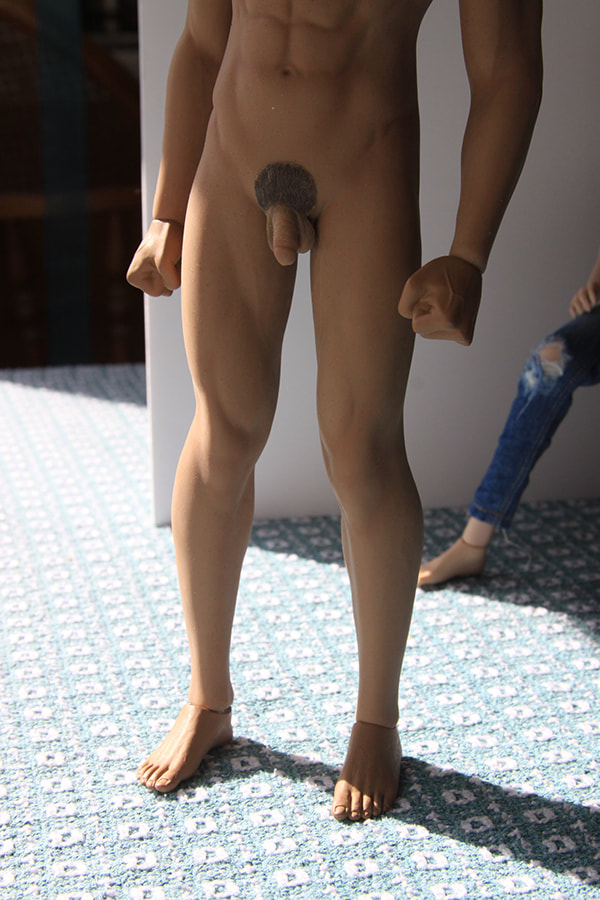 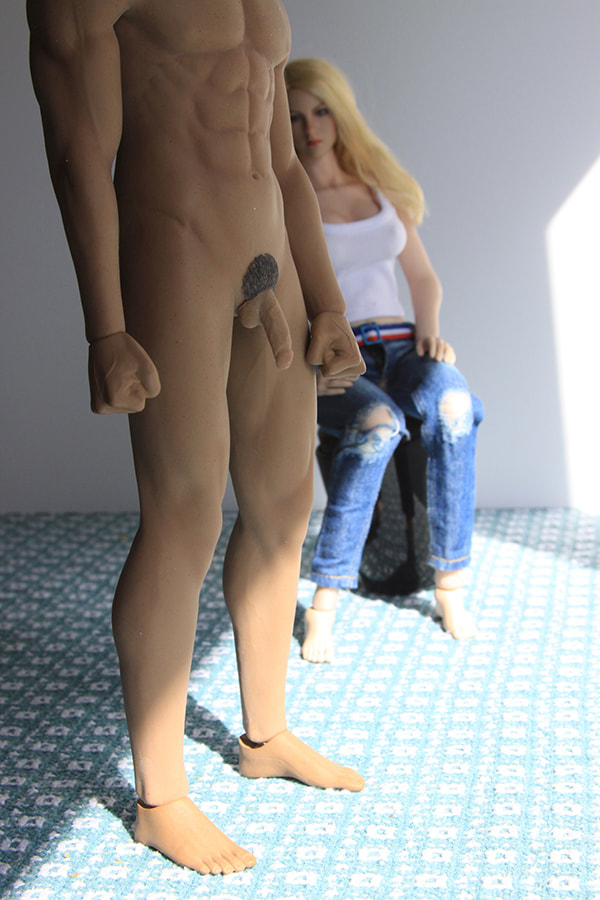 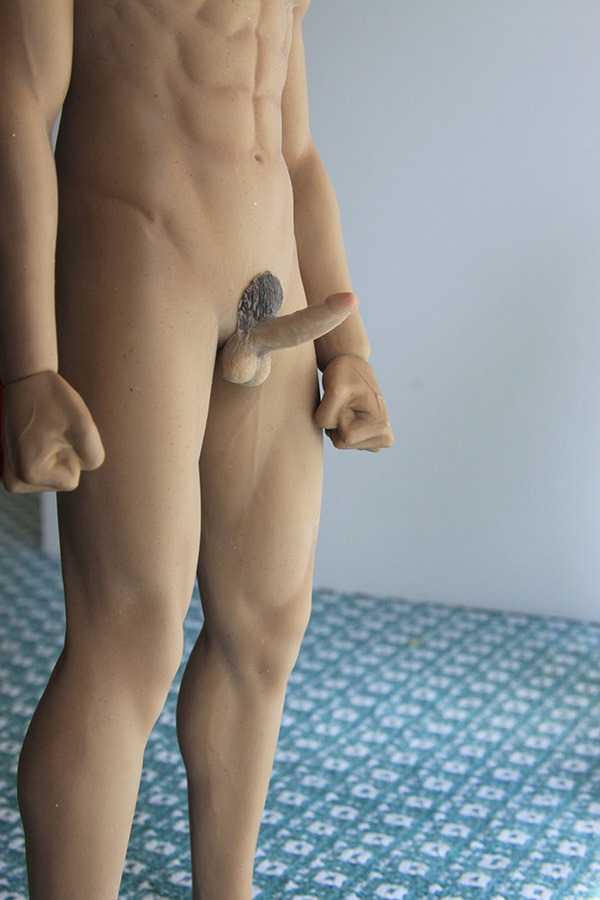 This last photo is just to show that the head does sit properly on the TBL neck pin. The steel ball on the neck pin will seat all the way in the cylinder inside the head without any modifications. All that is required is a small amount of heat. I think the sun coming through the window was enough to soften the head to allow the ball to seat properly. 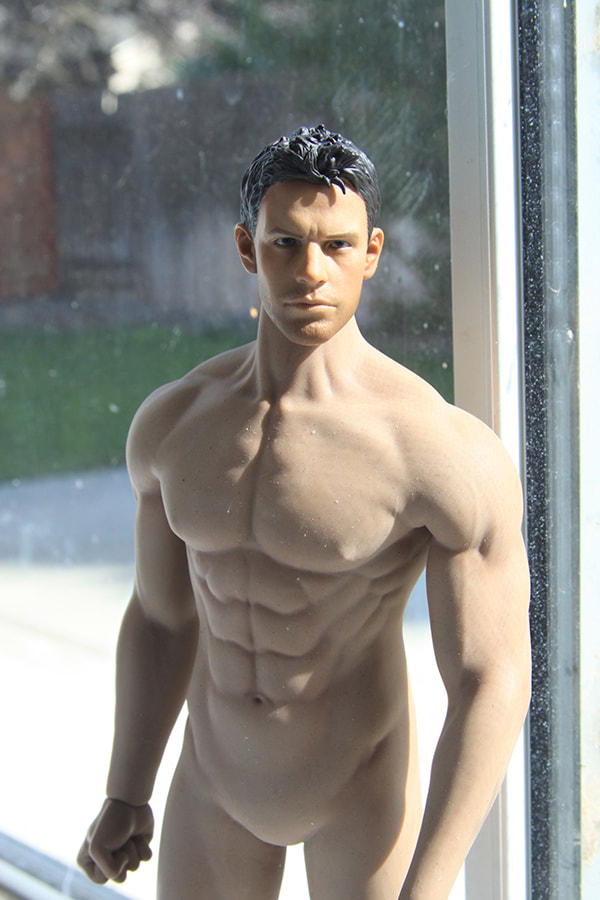 I am very pleased with this body! As with M30 (and most of the recent female bodies) it looks great, and is a lot of fun to pose. Another winner from TBLeague.