I was asked to post more photos of the curvy S39 body. There were some questions about whether the curvy body has the same range of motion as other TBL bodies.  I accepted this mission to further science!

We start out posing with some flowers because I thought the colors complimented her. Not only that, but it officially became Fall a few days ago, even though we're still having really hot weather. 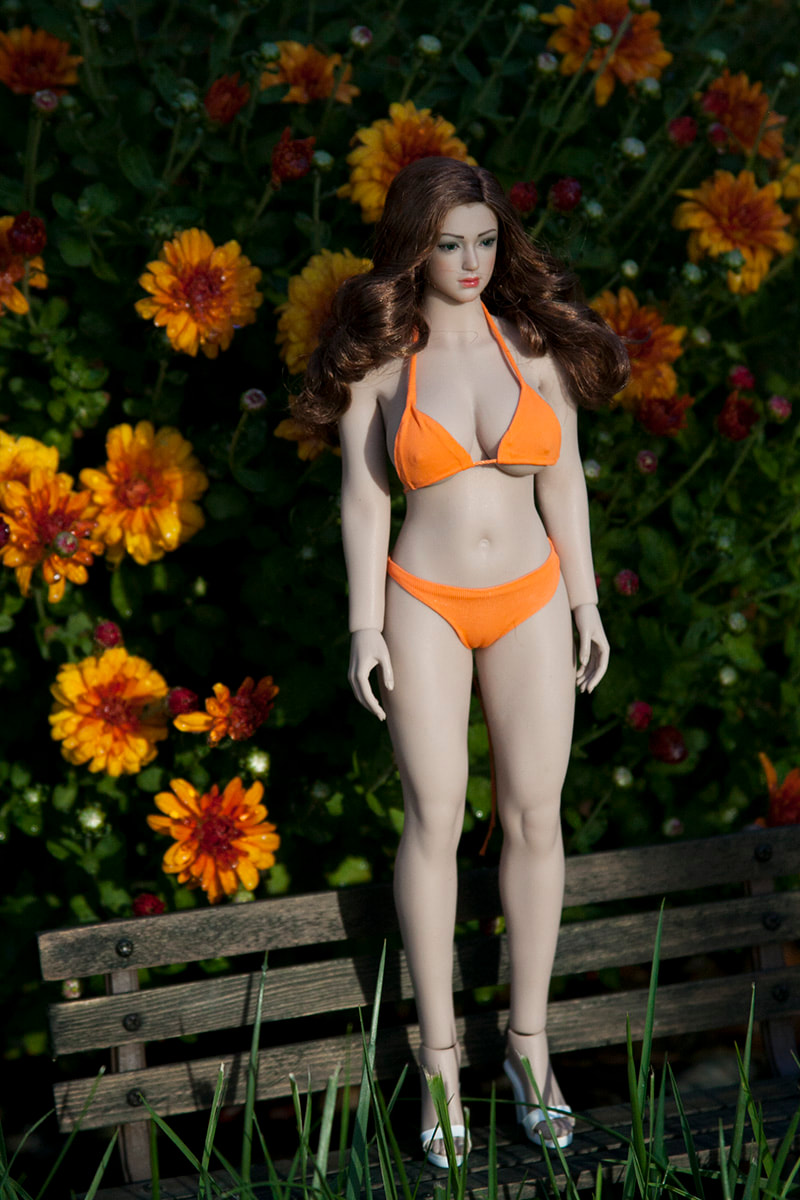 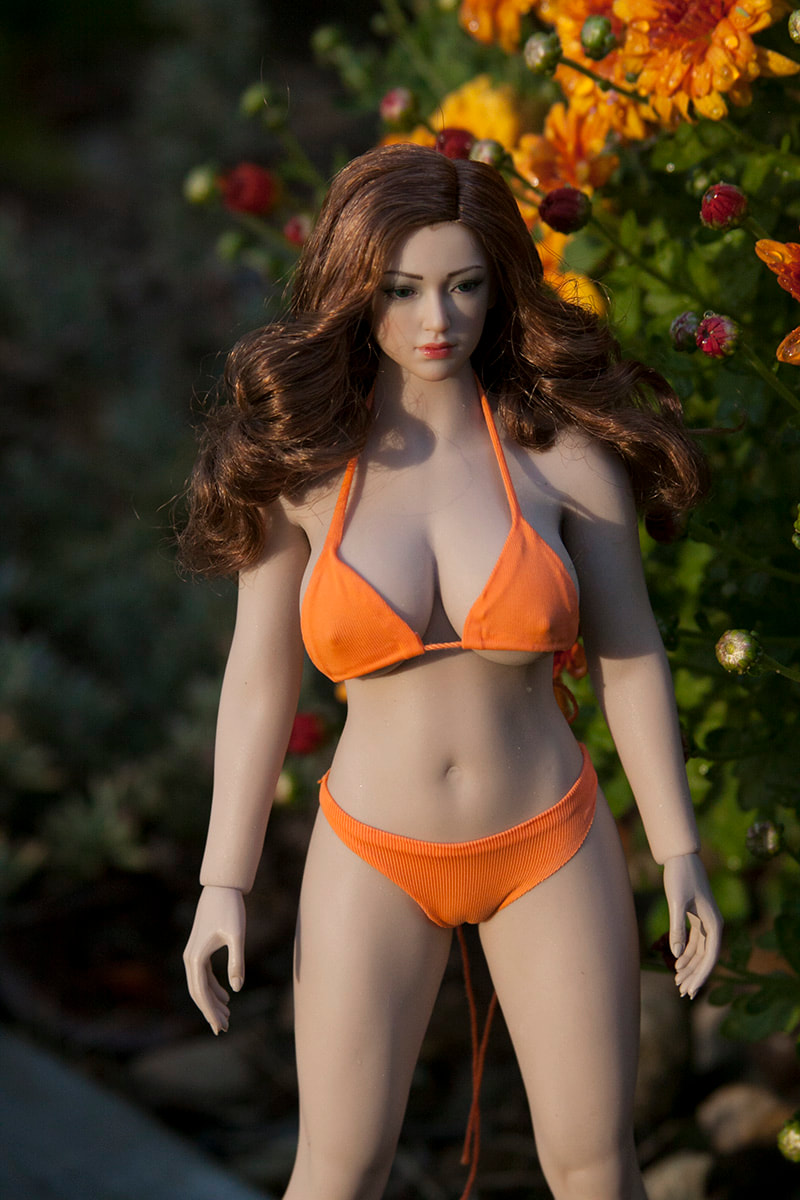 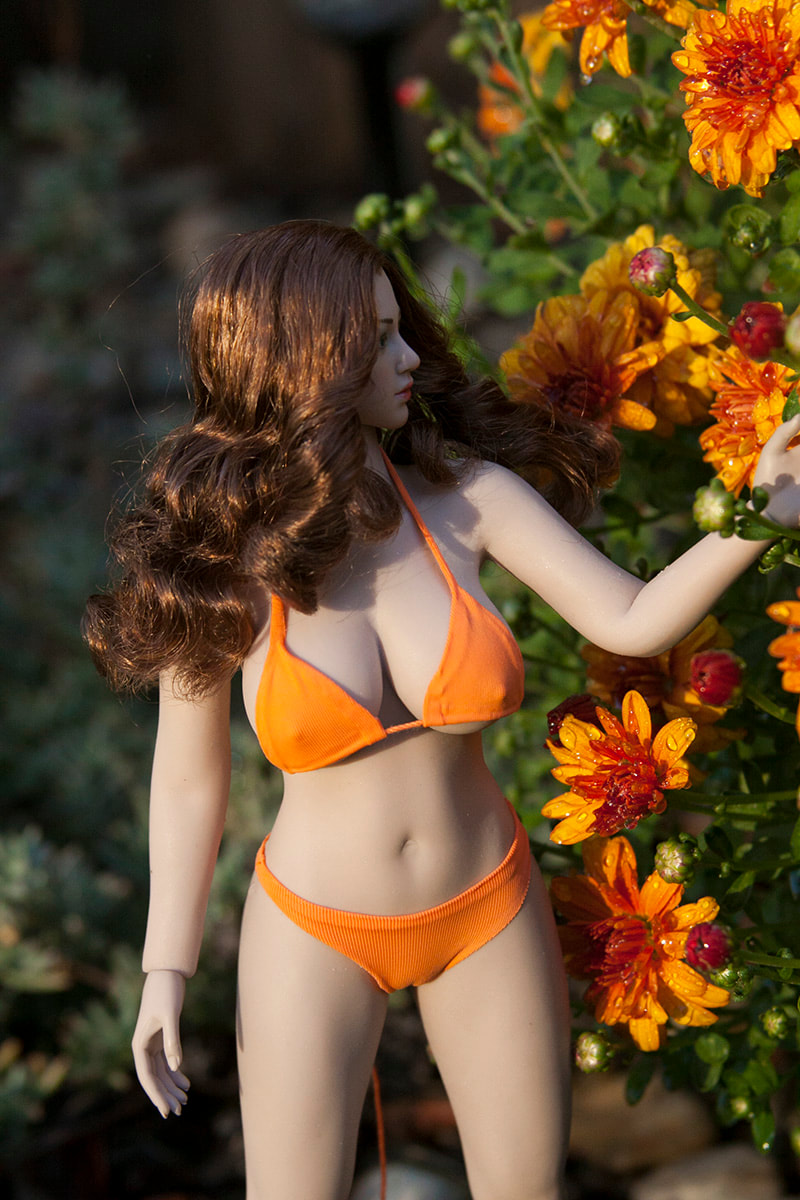 The light started to fade from this area so it was time to move indoors. 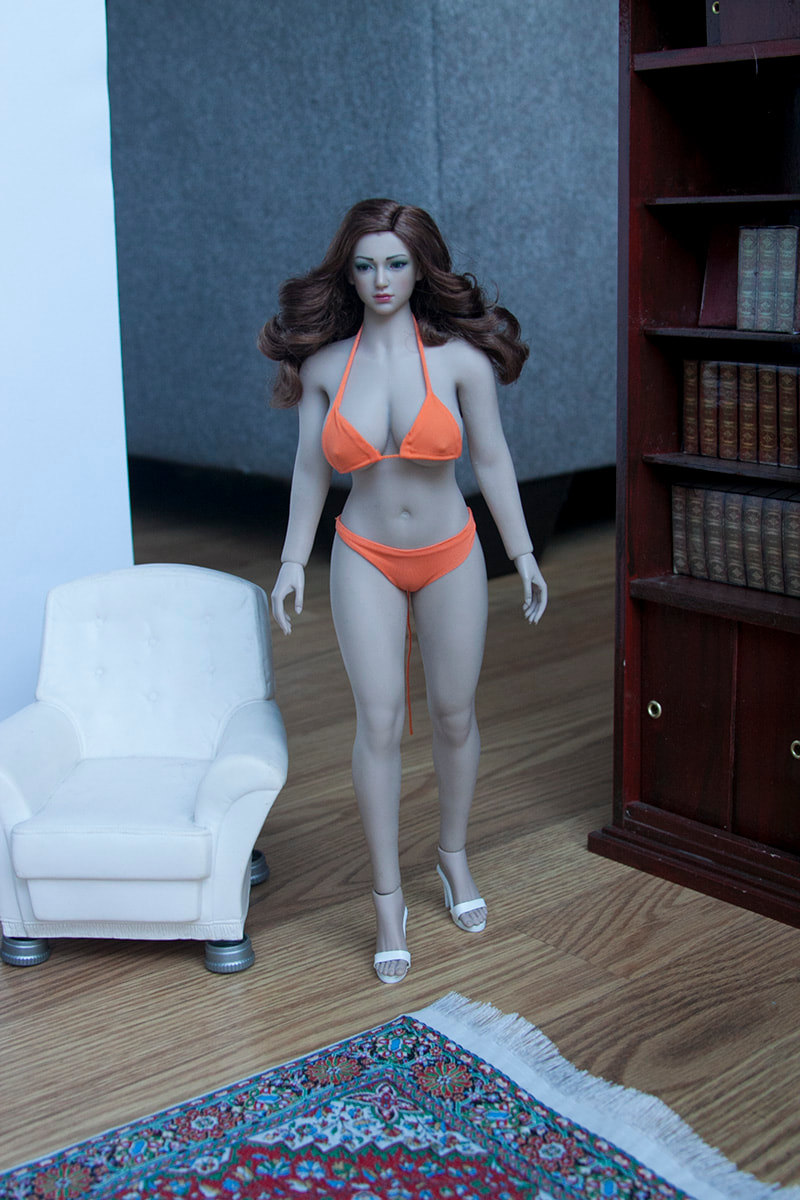 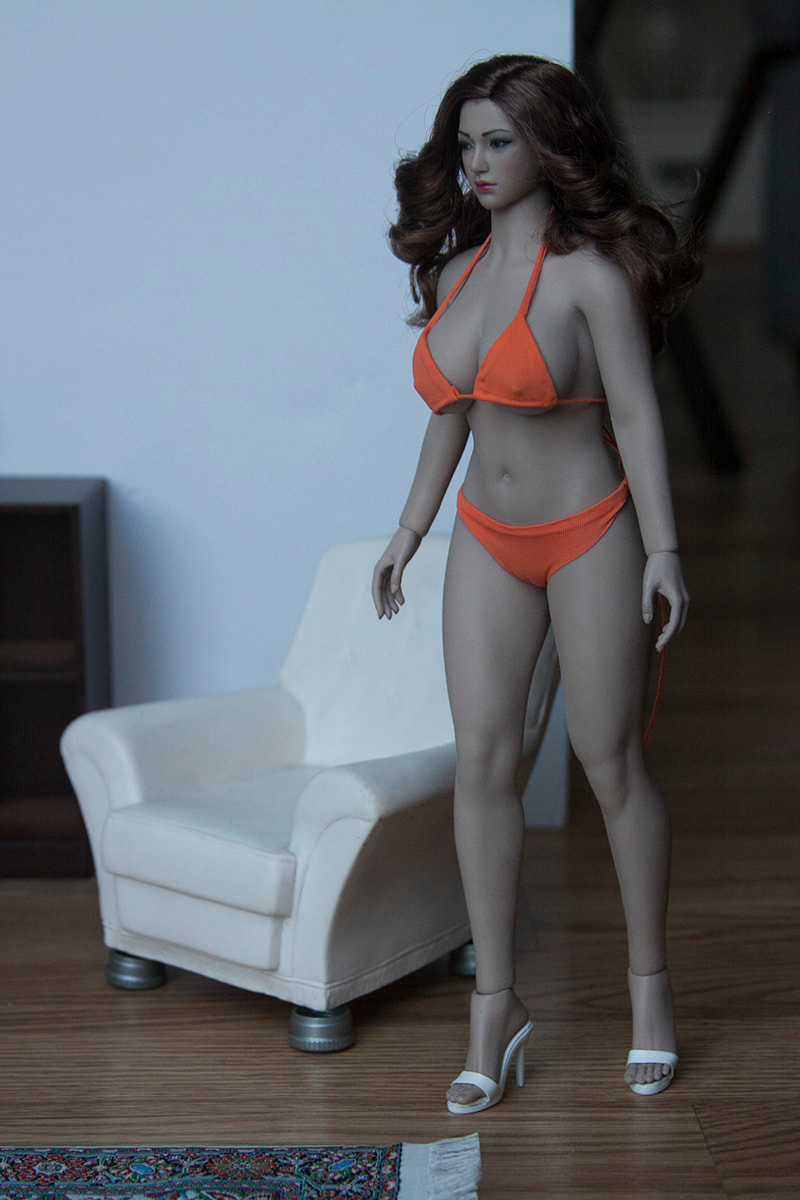 Not that it has much bearing on range of motion, but the larger feet and nice firm ankles allow her to simulate walking poses a lot more easily than other figures. Good shoes help in this as well; never underestimate the value of good shoes. 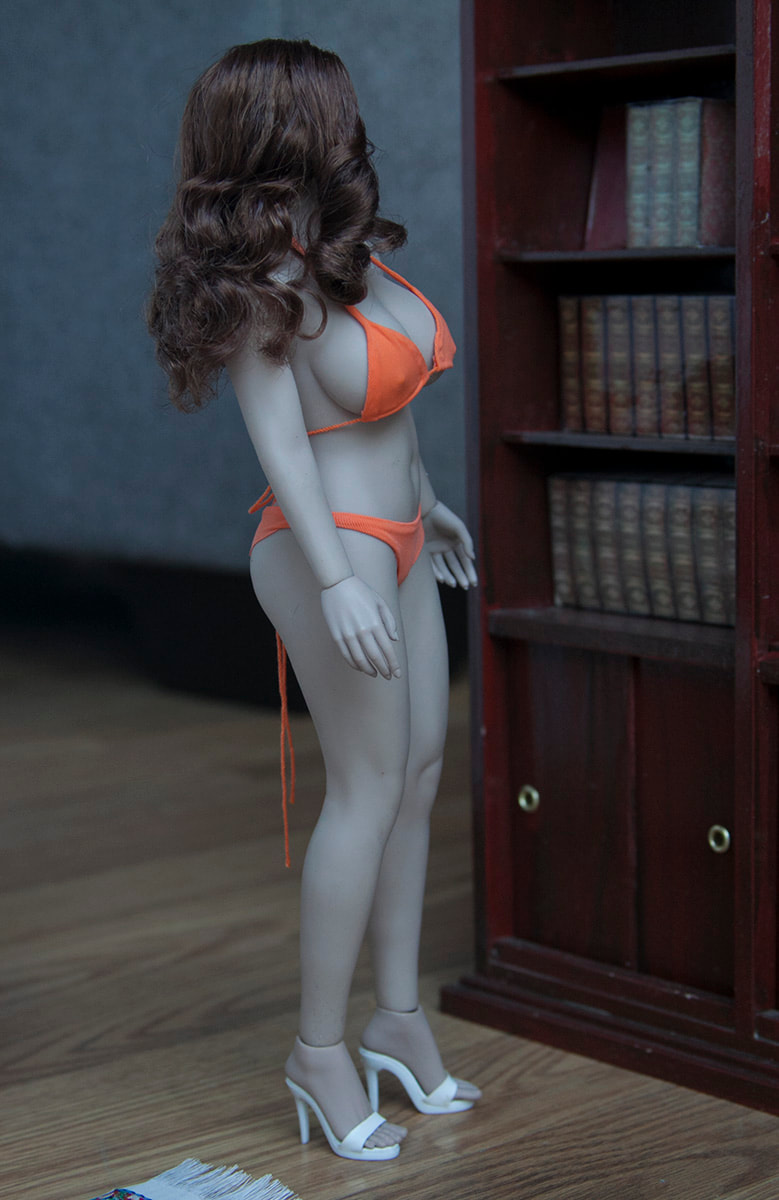 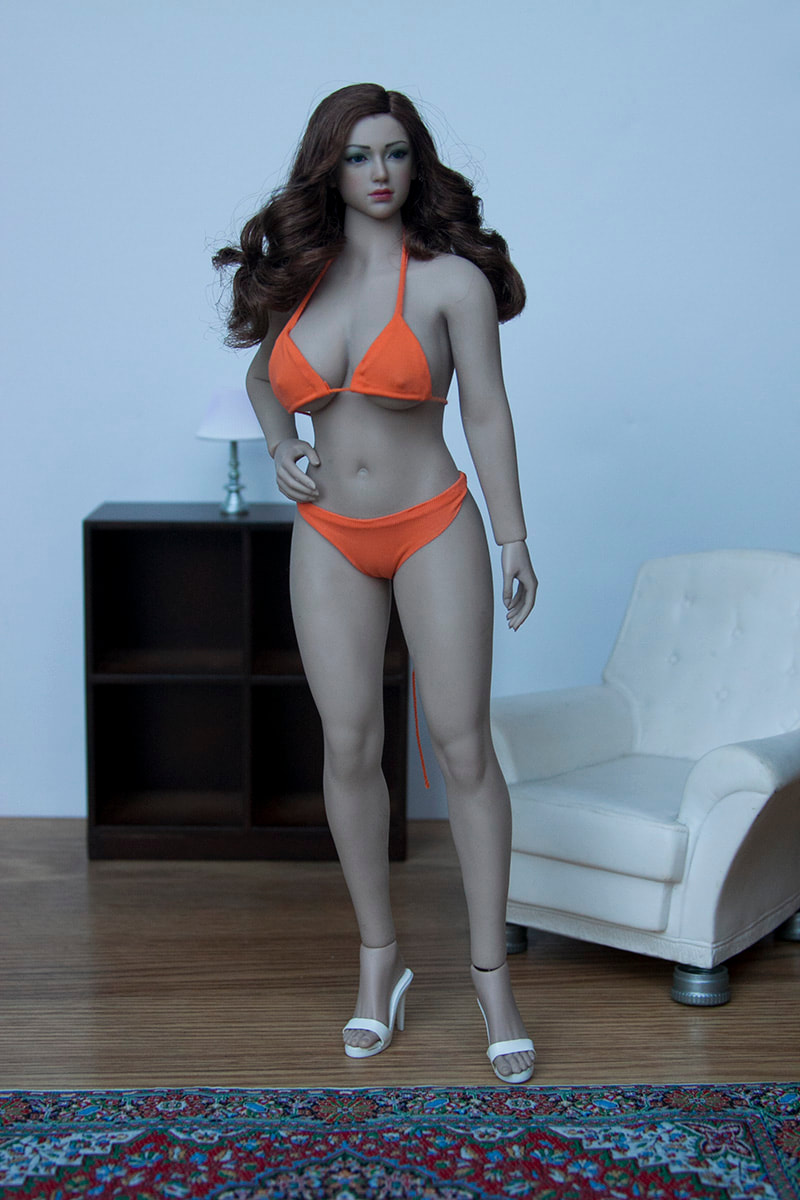 How about we start with the bench, just to get warmed up. 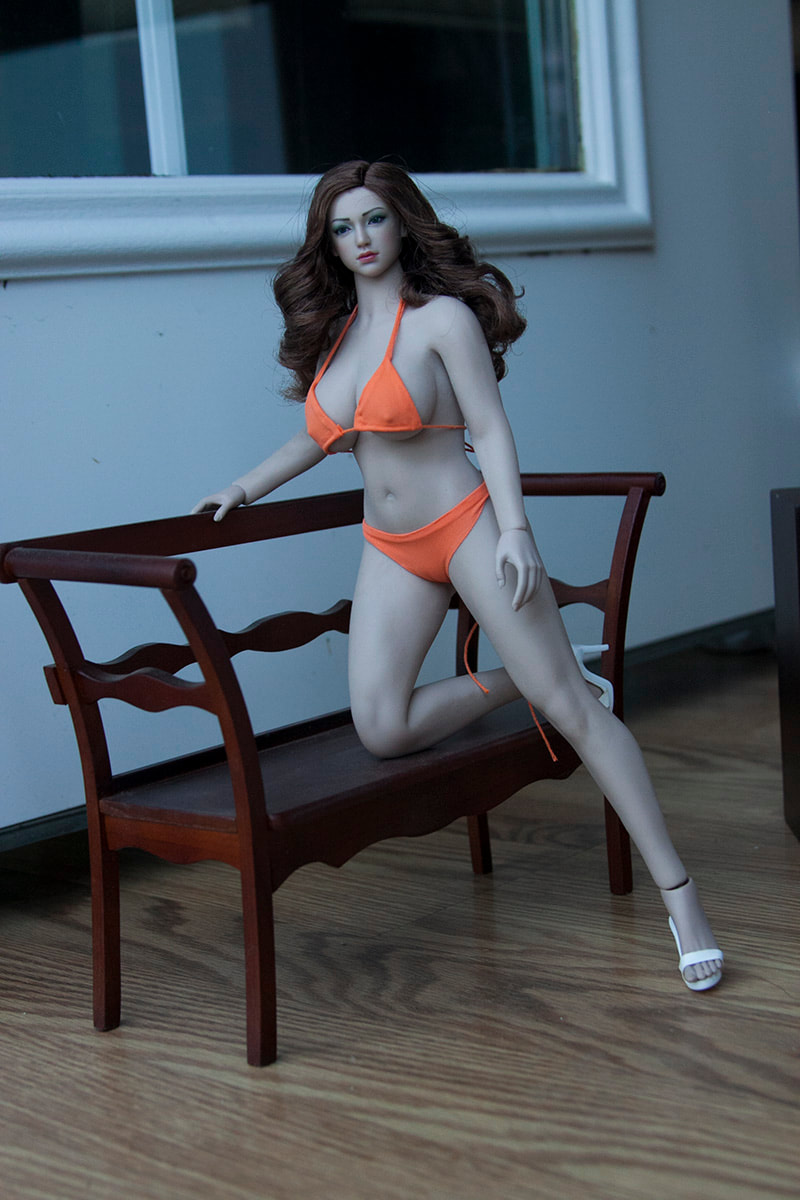 Yes, I know this is pretty much what we've seen before. 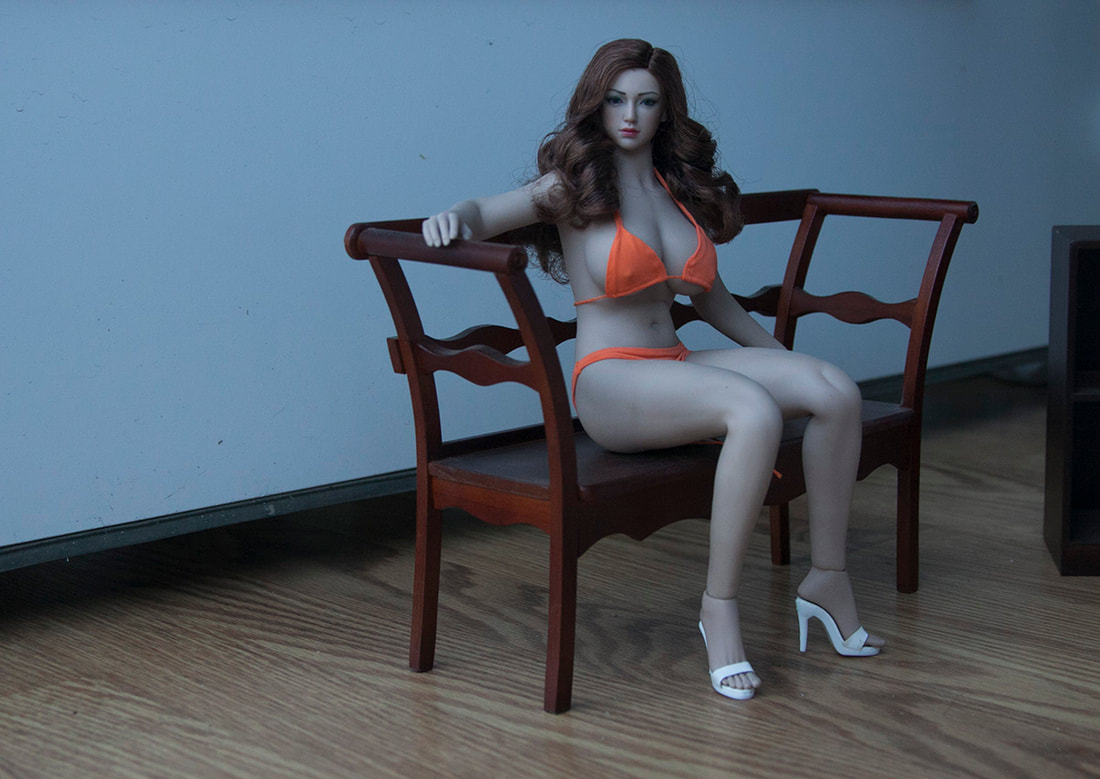 I just love photographing this new figure.
"Okay, now for some photos that are the purpose of this mission-"
"Before I get all contorted, I need to adjust my top." 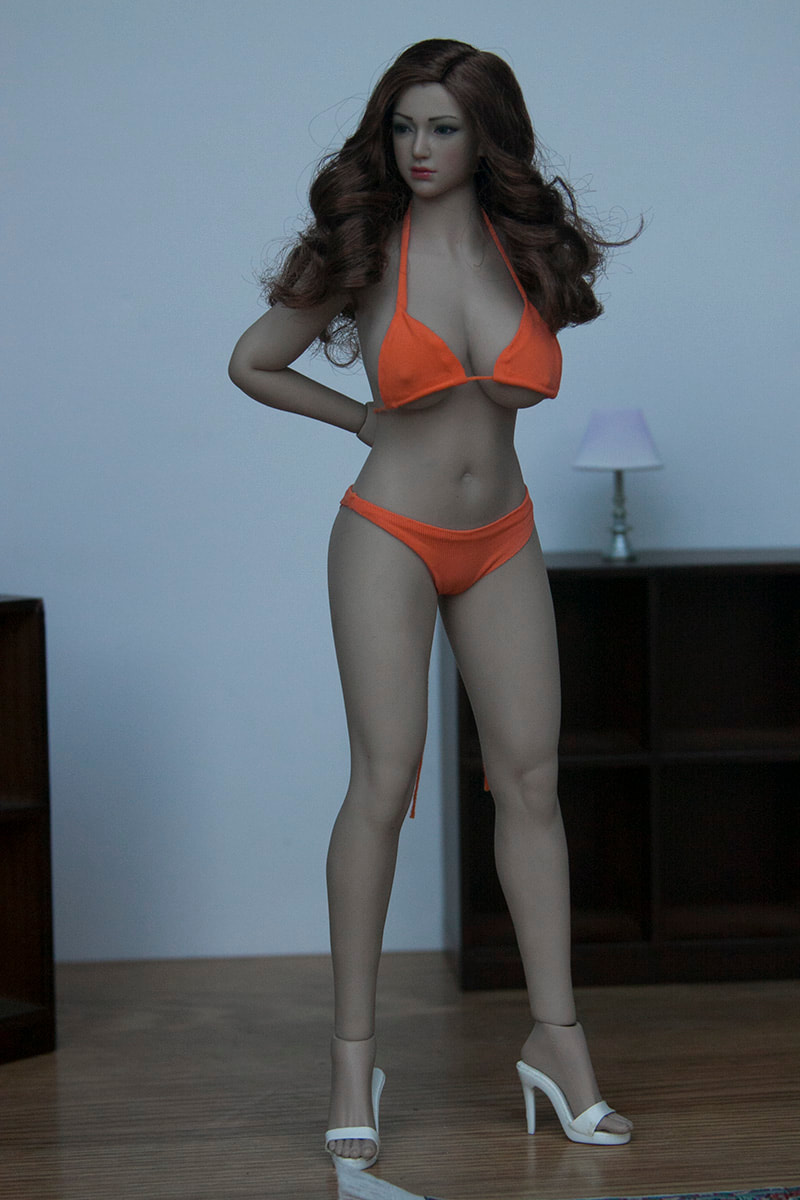 As I mentioned in my earlier post, I'm glad TBL included a swim suit with this figure. I also like that only the top requires tying. My only gripe - not sure it's a gripe, actually- is that the top just doesn't fit well enough. Now, I'm a fan of strategic clothing malfunctions, and "under boob" style, but I find it a challenge to keep it in place. At one point during this shoot, she just decided to press on regardless.

Okay, ready  for some floor exercises? 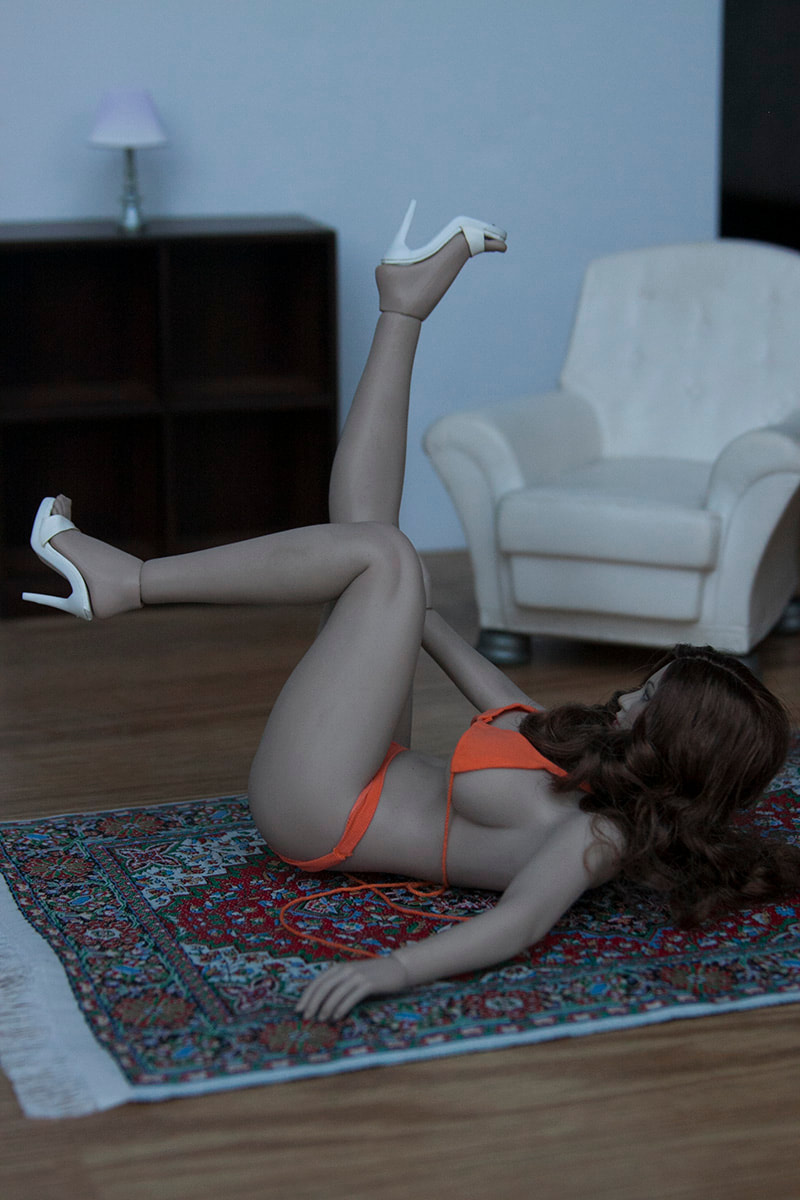 While I consider this very pretty, I have to admit that many other TBL bodies would be able to do this position with more range of motion in the hips, knees, and torso. Some of the reduced range in the hips may be due to the tight fitting swimsuit binding in that area. 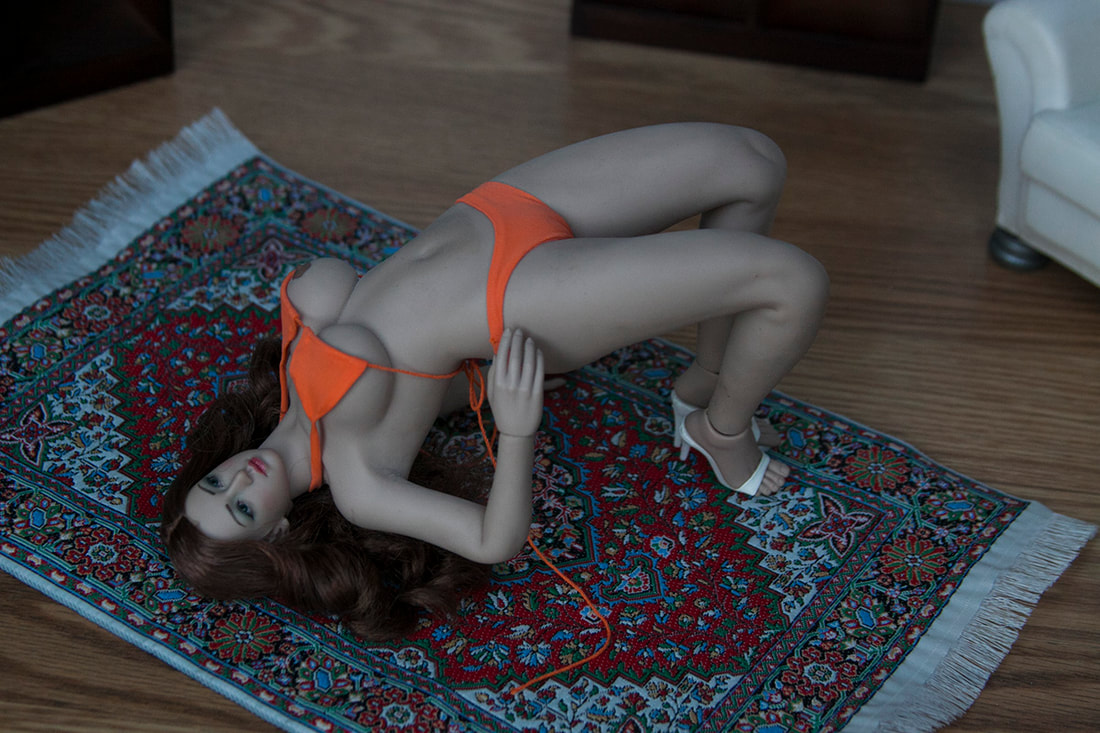 Her range of motion in this direction seems to be on par with the other TBL bodies. There is also no noticable difference in the range of movement in her shoulders. Her elbows do go a bit past 90 degrees, a bit less than the other bodies, I think. At any rate it's a movement that I try to minimize with these figures and only use for photos.

A few moments to stretch in the other direction- 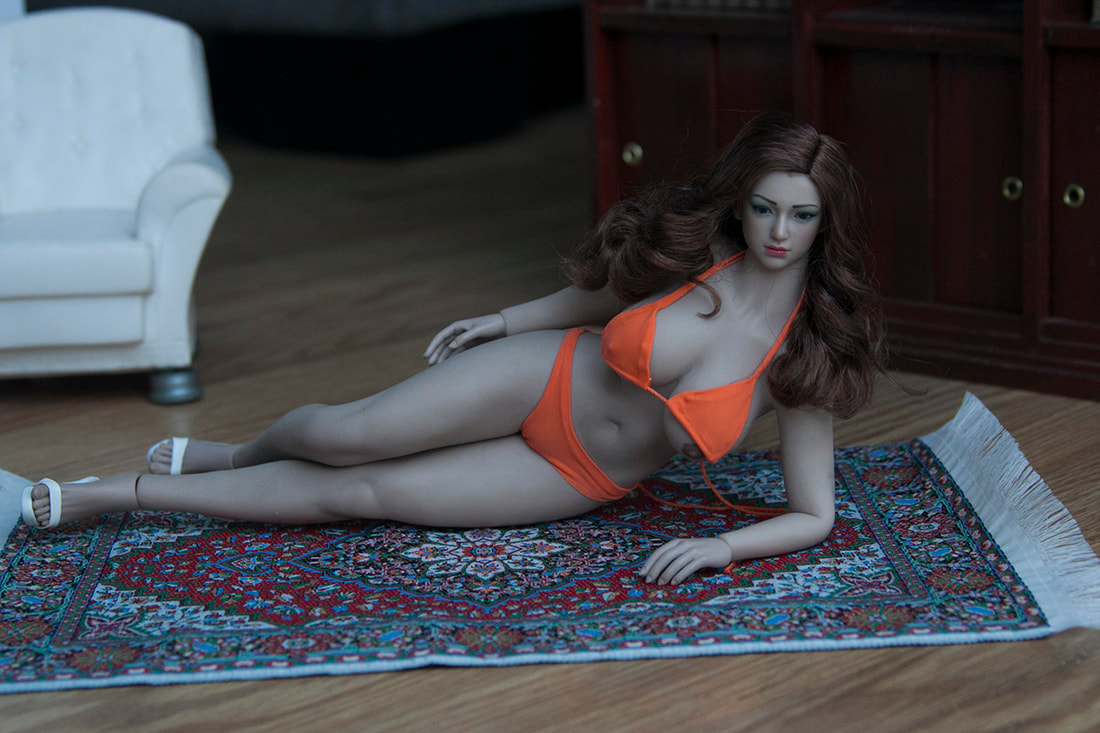 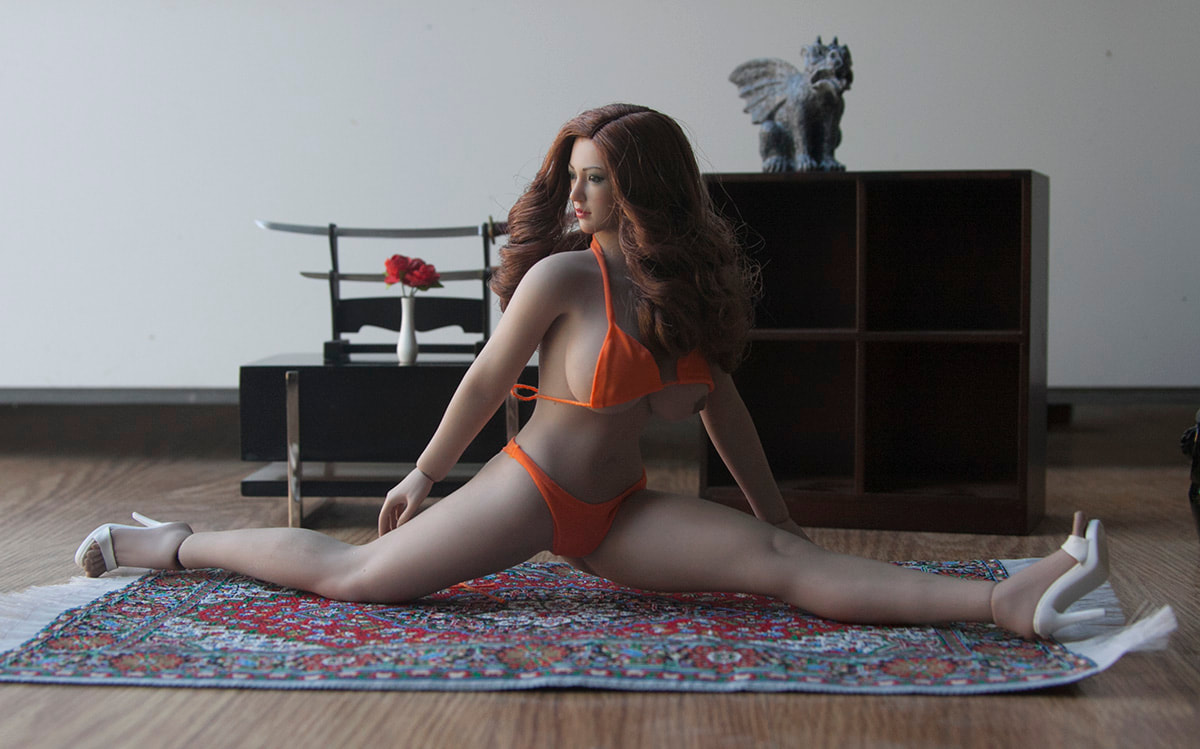 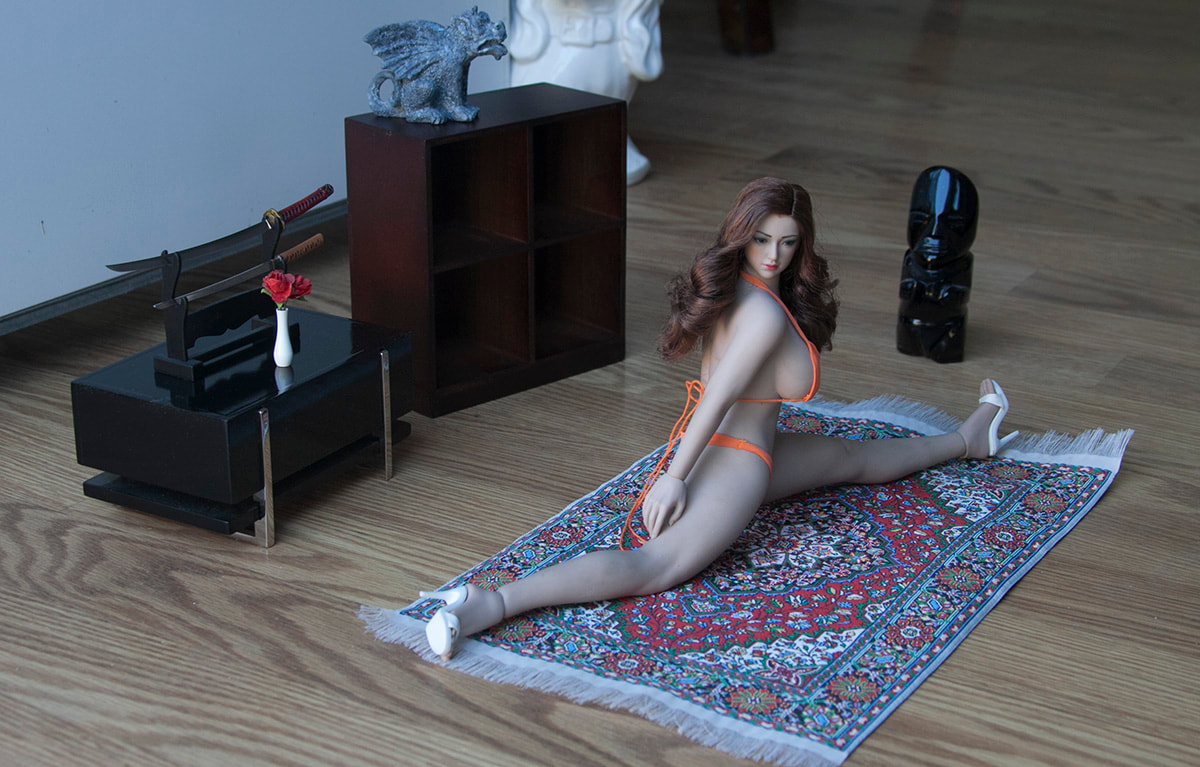 Again, maybe not as extreme as other bodies, but still quite impressive.

Here she is in this variation: 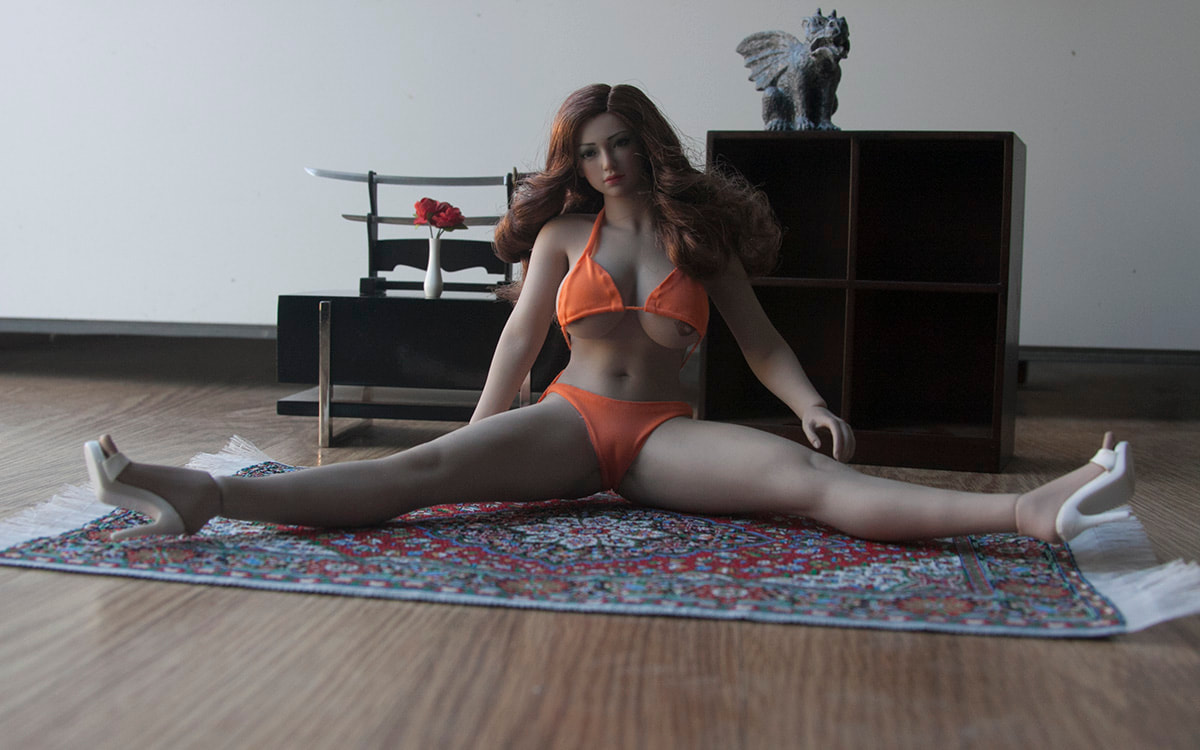 All in the interest of science... okay-
"Hey, you know some of these things are pretty interesting." 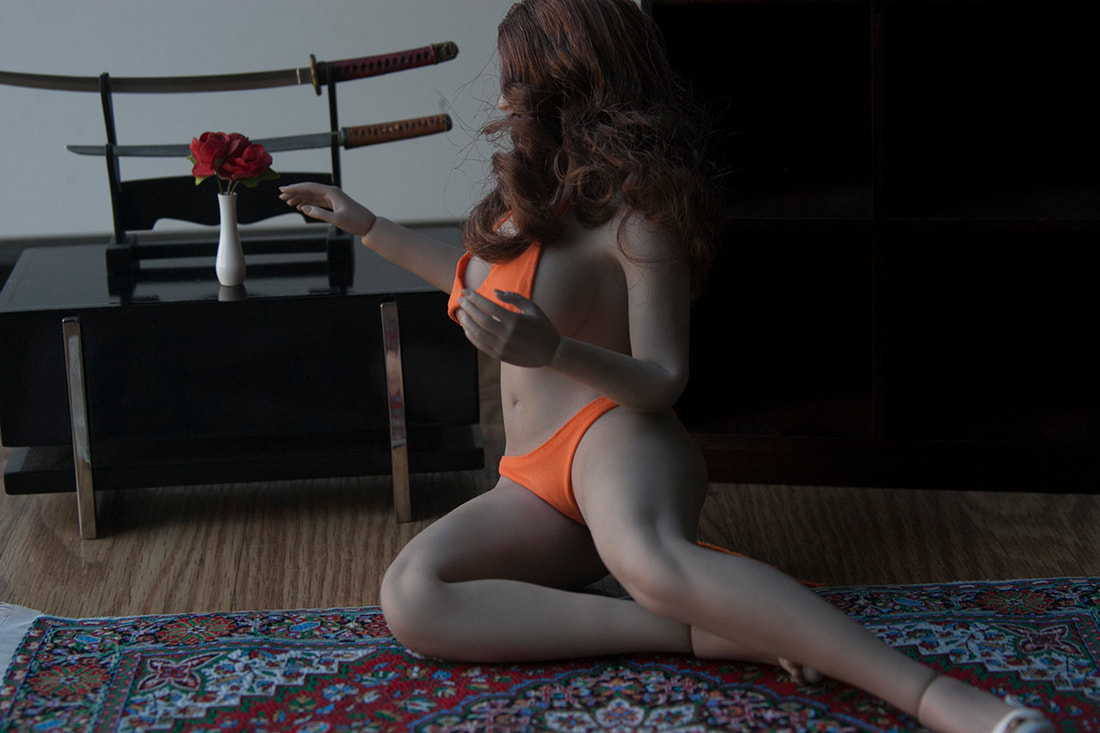 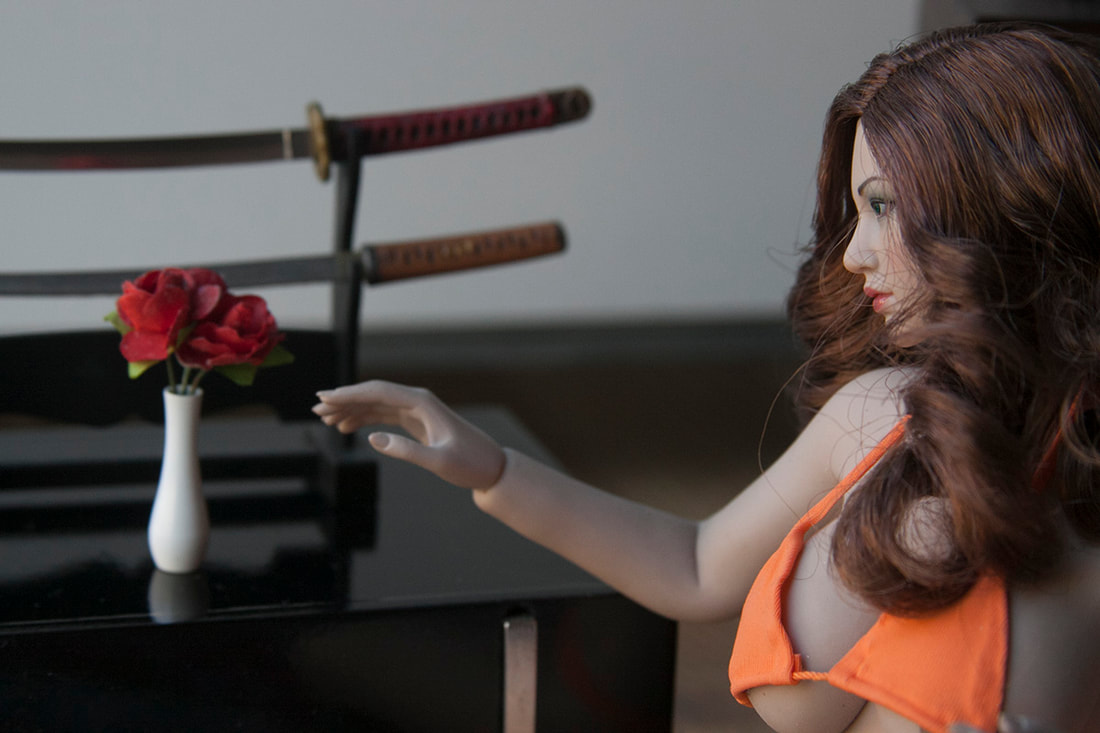 "This little guy looks like he came from a building in Europe. I can tell it's pretty old."
"Uh, I think it's best for us to not wonder out loud where this stuff comes from. I hear it didn't go well on a previous  photoshoot." 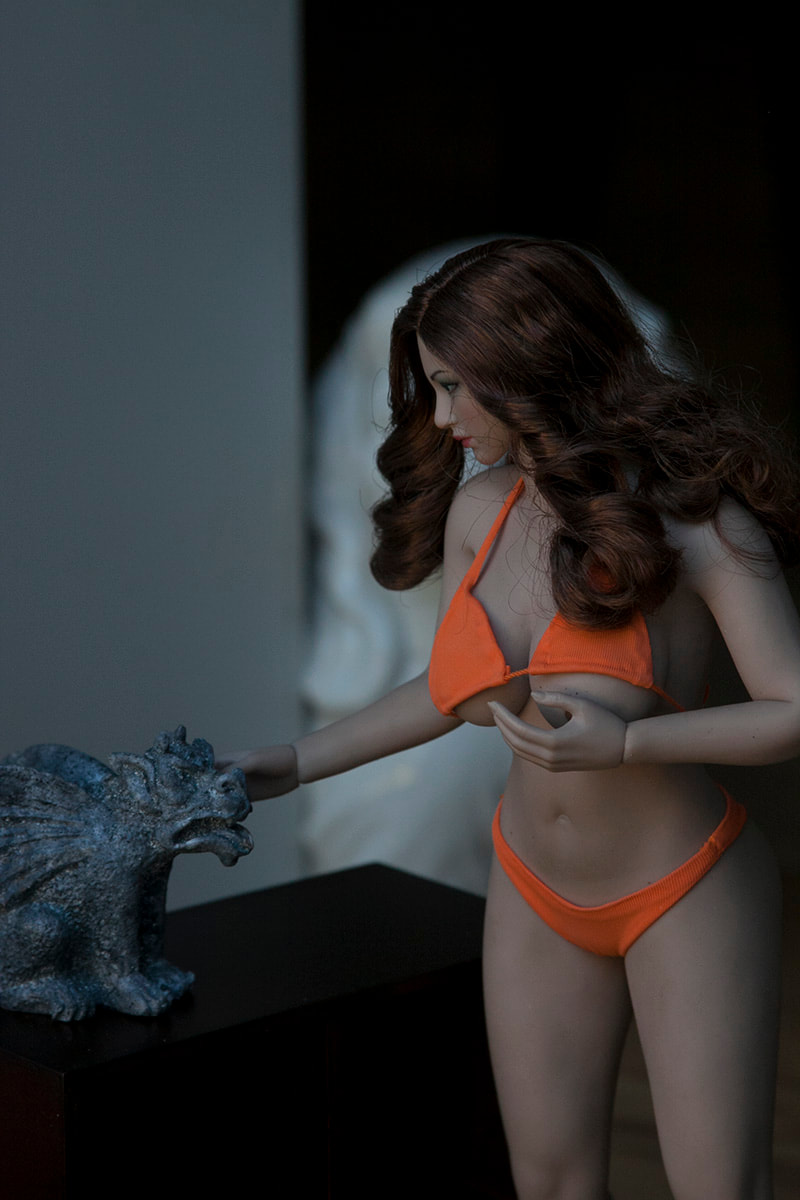 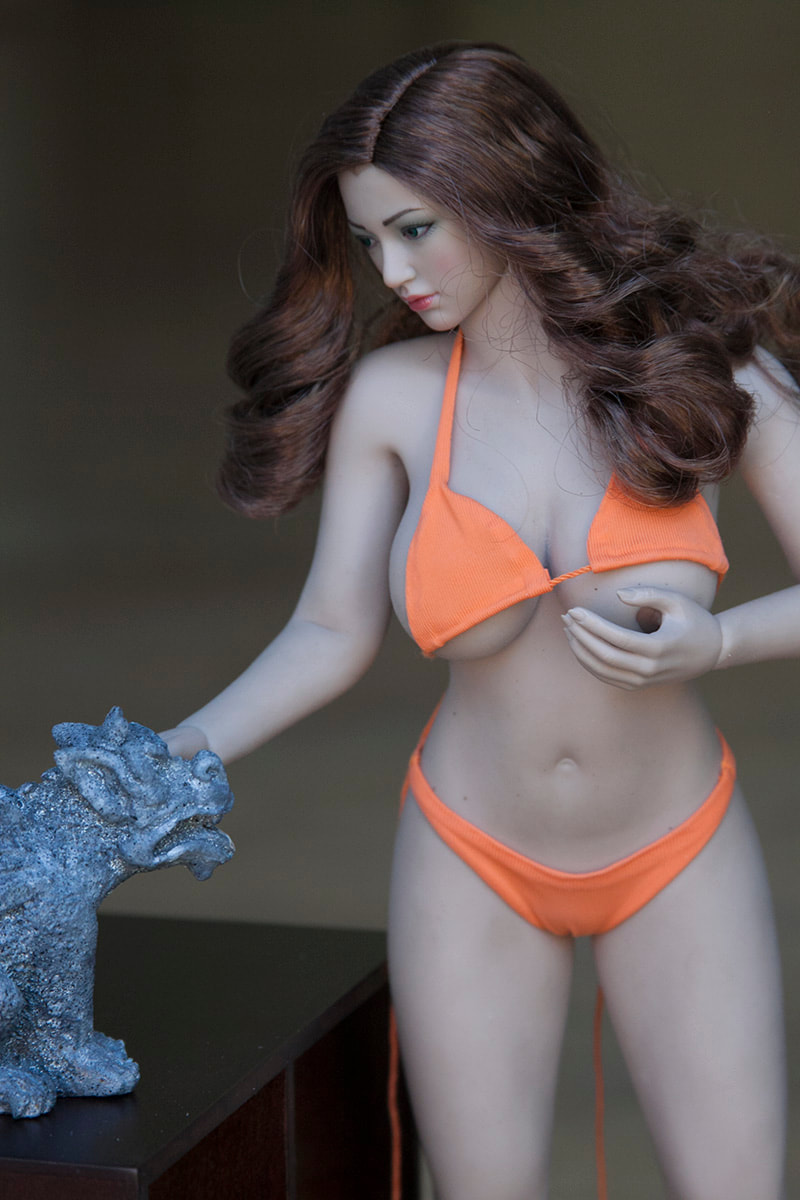 "Okay, let's see how high you can kick." 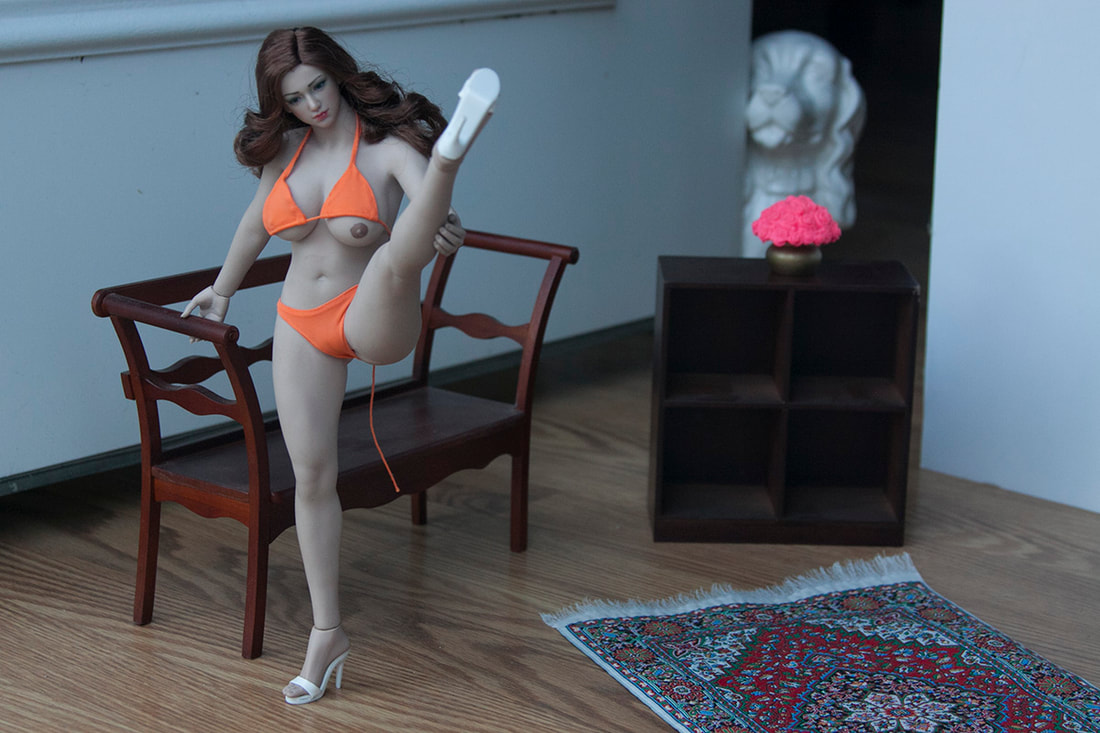 This is actually very similar to what other TBLs can do.  The variation that I didn't photograph, where  she brings her leg up slightly from the side and then raises it up is also quite similar to what other TBLs attain.  I seldom use this extreme range of motion, but it's still nice to know they can do it. Especially if they need to take someone out with a swift, well aimed kick.

Okay, time for the chair. 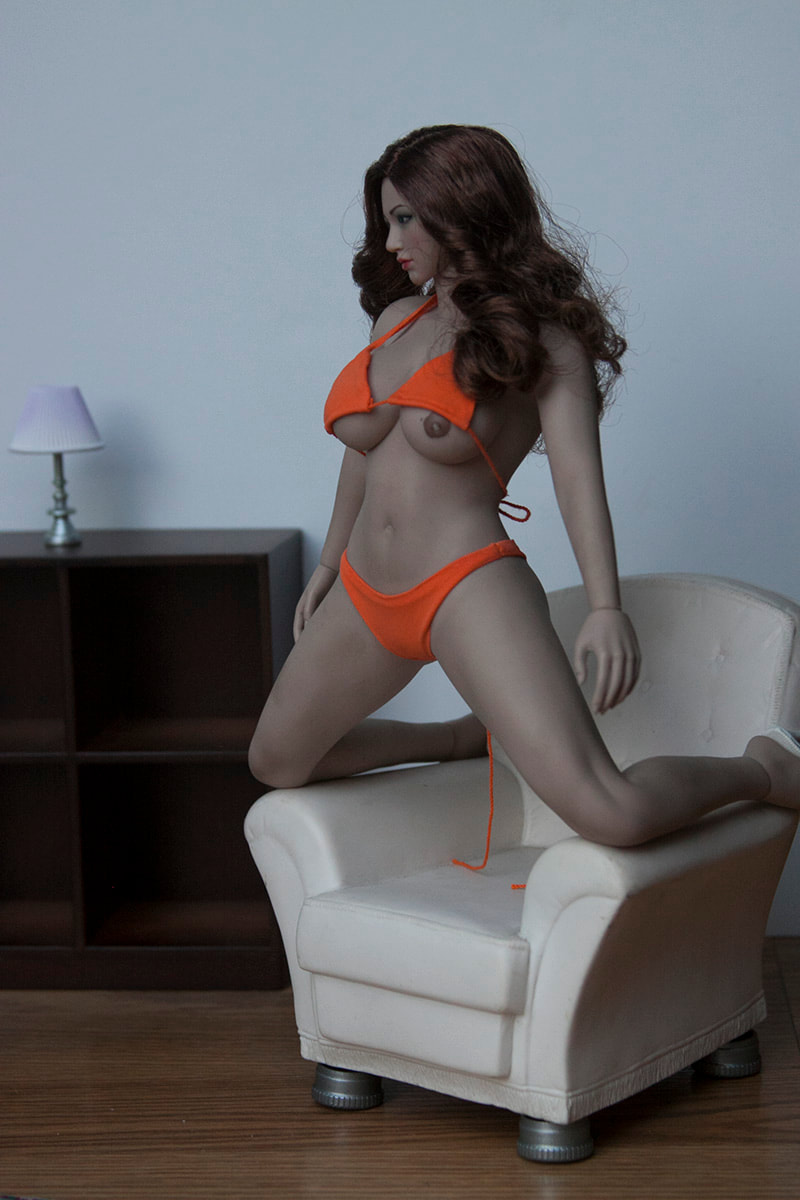 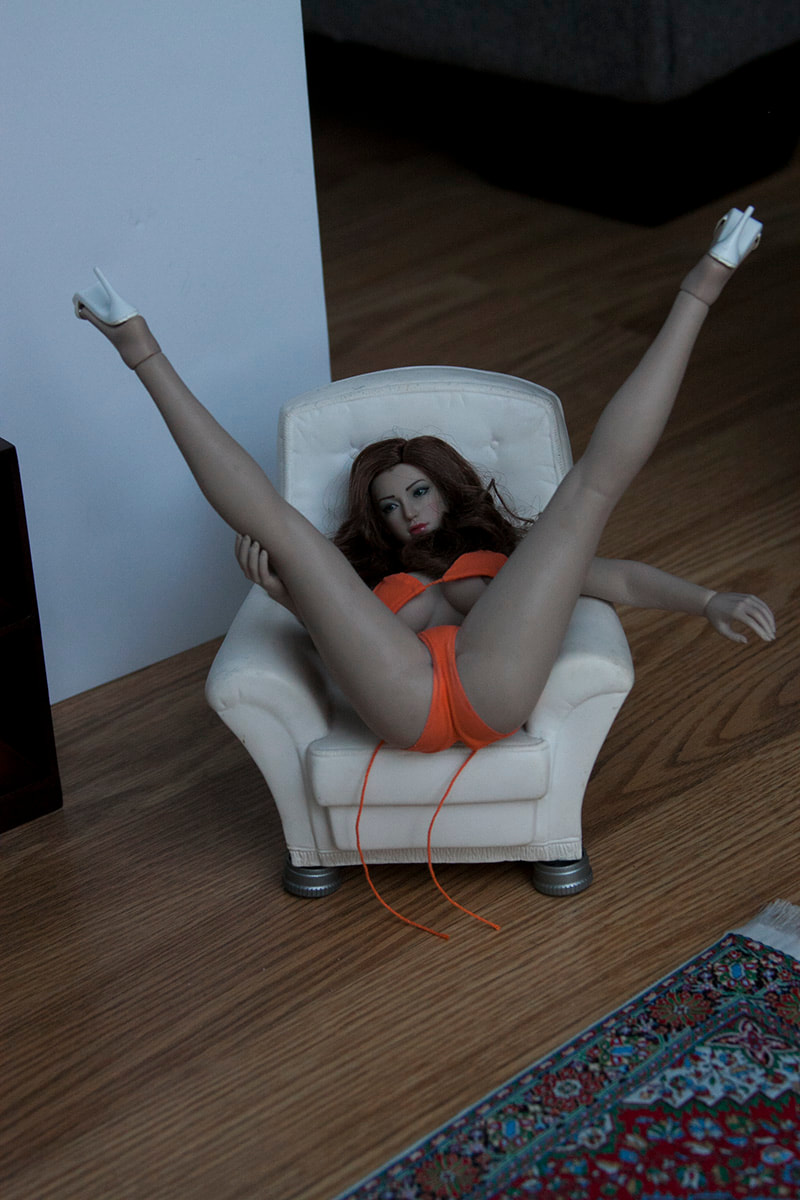 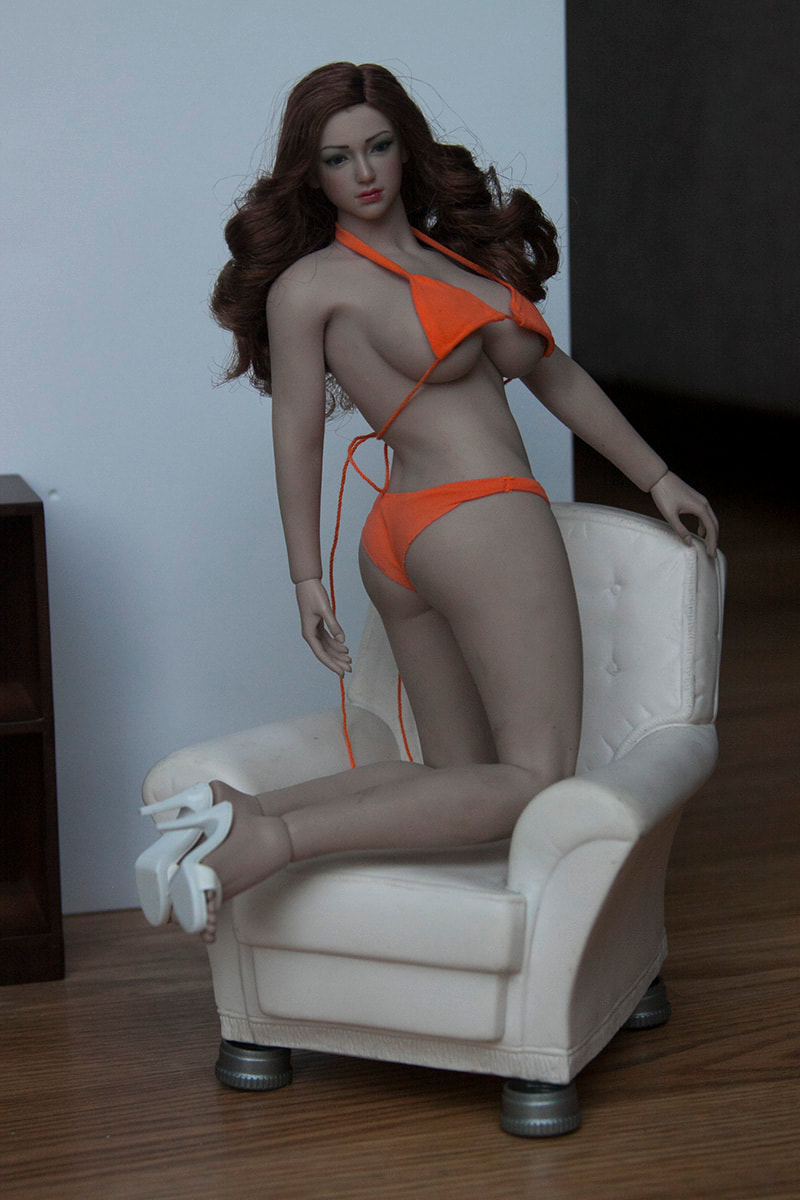 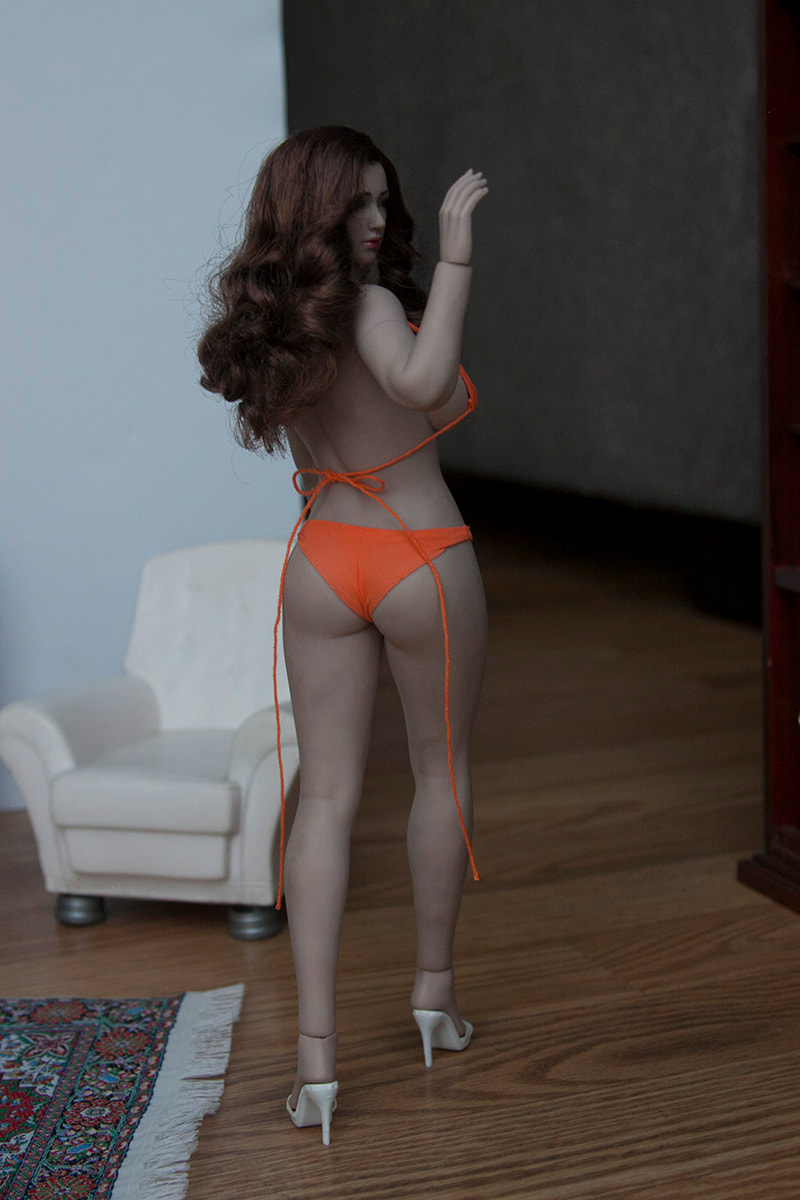 What I find is that yes, there are some areas where this body has reduced range of motion compared to the more svelte ones, but nothing that affects the utility of the body or its ability to do every day, useful poses.  For me the trade-off of a few degrees of motion for a body like this is well worth it.

I've been thinking about this shoot. Can her range of motion really be that different? The two areas that seem to be the most different that have significance to me are the elbows and the hips. 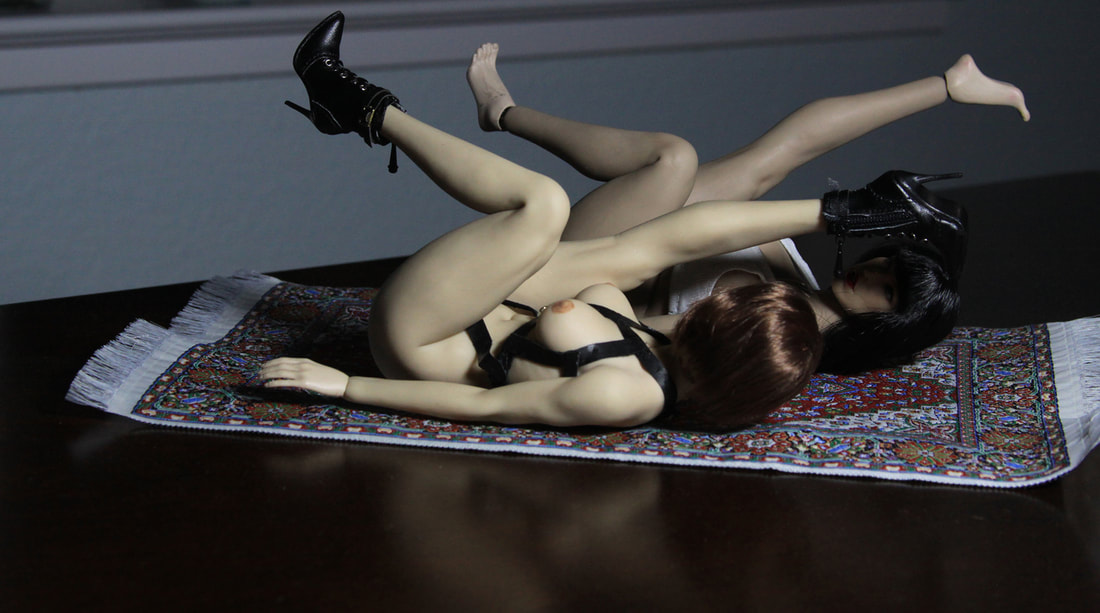 Now, both of these bodies have seen significant use. The S21B is a first release of that body from the Captain Sparta or Van Helsing figure set. TBL wasn't even selling the bodies as accessories yet. The S22A is a well used body from a character in the saga (Agent Erika Malakof). Compare this pose with what S39 did and the difference is remarkable. Maybe with use S39 will approach this. These two figures can easily do this pose without pushing the limits of their joints and skin (I don't do that with my figures anyway). This pose is a "walk in the park" for them.

The other pose involving hip movement is this one: 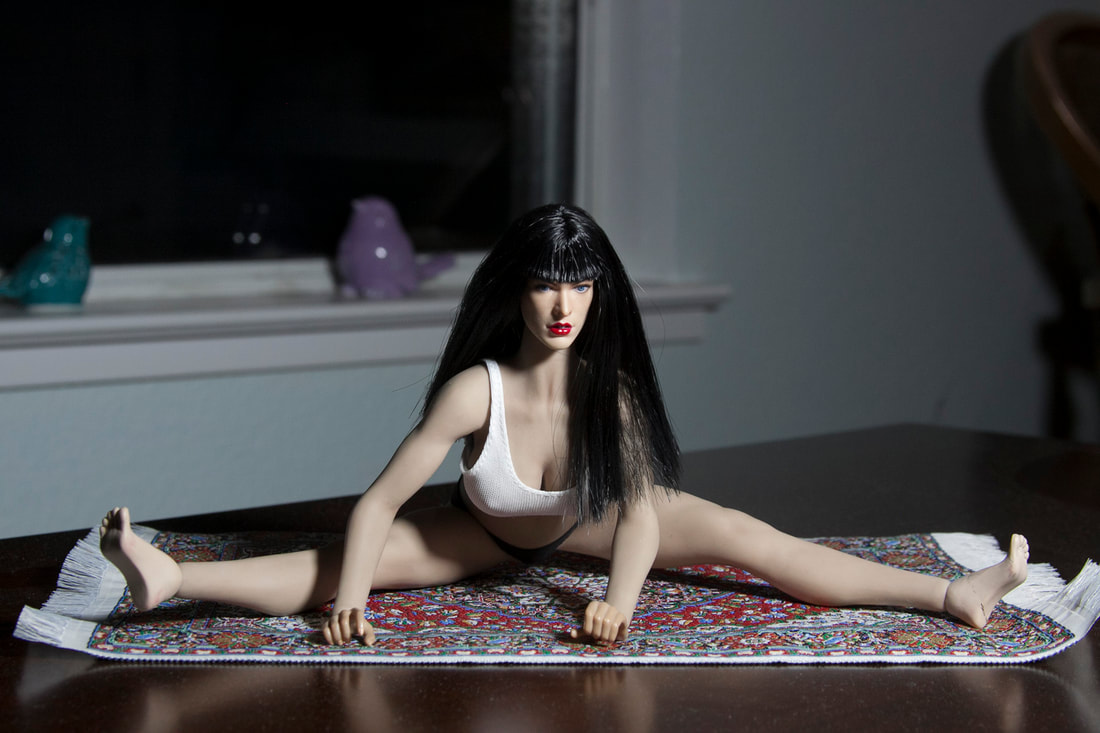 My final assessment is still pending on this one. I might try this again with S39, but I didn't feel that I could get her hips to rotate forward with her legs spread like this. Again, this pose is a snap for S21B, and as it stands now,  S39 did a similar pose, but not the same one.

Next, and probably more significant than these gymnast poses is the elbow. Was I being overly cautious with my S39 and her still new joints? It turns out that I was. Here's what she can actually do compared to S21B and S23B (decided to use Agent Malakof as she is now): 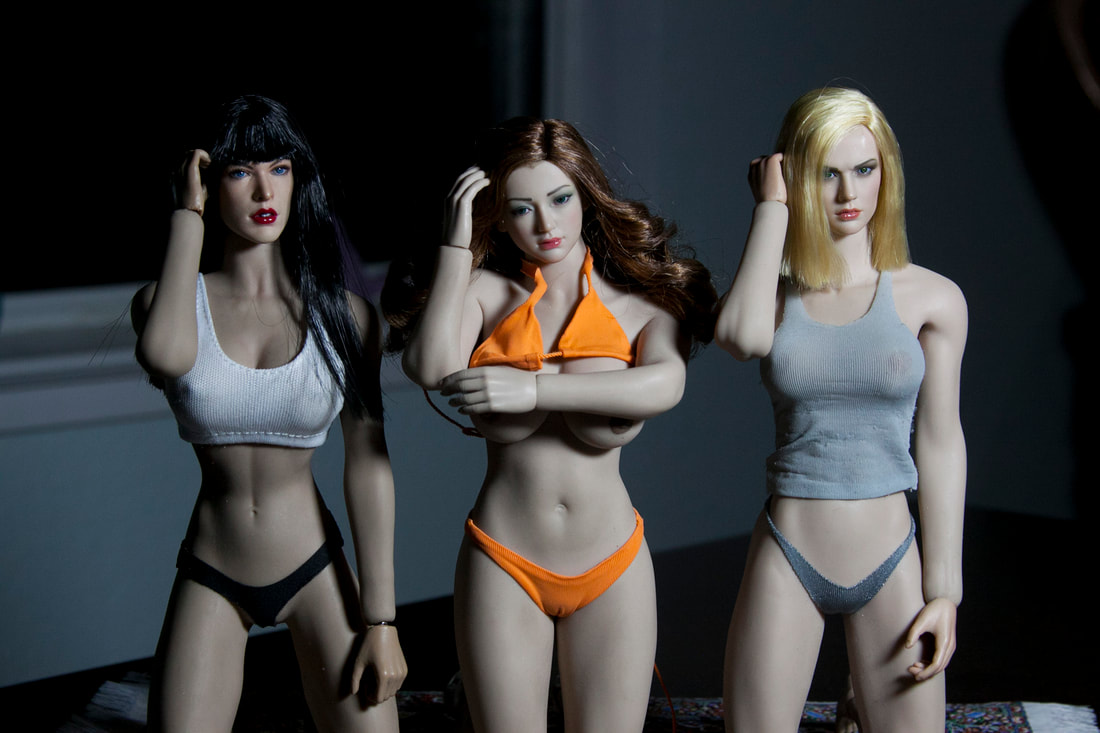 Okay, maybe not exactly what her new friends can do, but pretty close and maybe with a bit of use she can get those last few degrees of motion.