I've been interested in trying a male Jiaou Doll body, and recently found this one at a good price.

The full description is "Detachable Foot Muscle Male Body, Natural Skin".  I don't think they mean to imply their other skin tones aren't natural, just that this tone isn't as light as "Pale". To be honest, it looks a lot more natural than the "suntan" tone or at least a lot healthier.

It's the same skin tone as the female body I reviewed earlier, which I think is reflected in the YS suffix. These bodies do not include a head. Though I prefer this skin tone to the far more common sun tan, finding a head in this tone is a bit of a challenge. In the case of the female body, I had a head that I specifically wanted to try, and it worked out very nicely. The only male heads I have that come close to this tone are a couple of Ken heads. The match is much closer than reflected in the photos.

Some immediate observations. First, it's a bit more muscular than the TBLeague M31, but less than the M33. I think it reflects an athletic physique without being really heavily muscled.

The second thing I noticed is that Jiaou Doll uses a different neck connector on this body from what they use on their female bodies.  I was a bit concerned about this as I haven't really been happy with the removable plastic connectors they use on the females. This male body has a nice, sturdy steel neck pin with a large neck ball.

Another nice touch JD does is to provide underwear for the figure (briefs and a T-shirt). It's a small thing, but at least I don't feel that I'm getting a completely stripped down figure. This is in keeping with their practice of providing a bikini with their female figures. 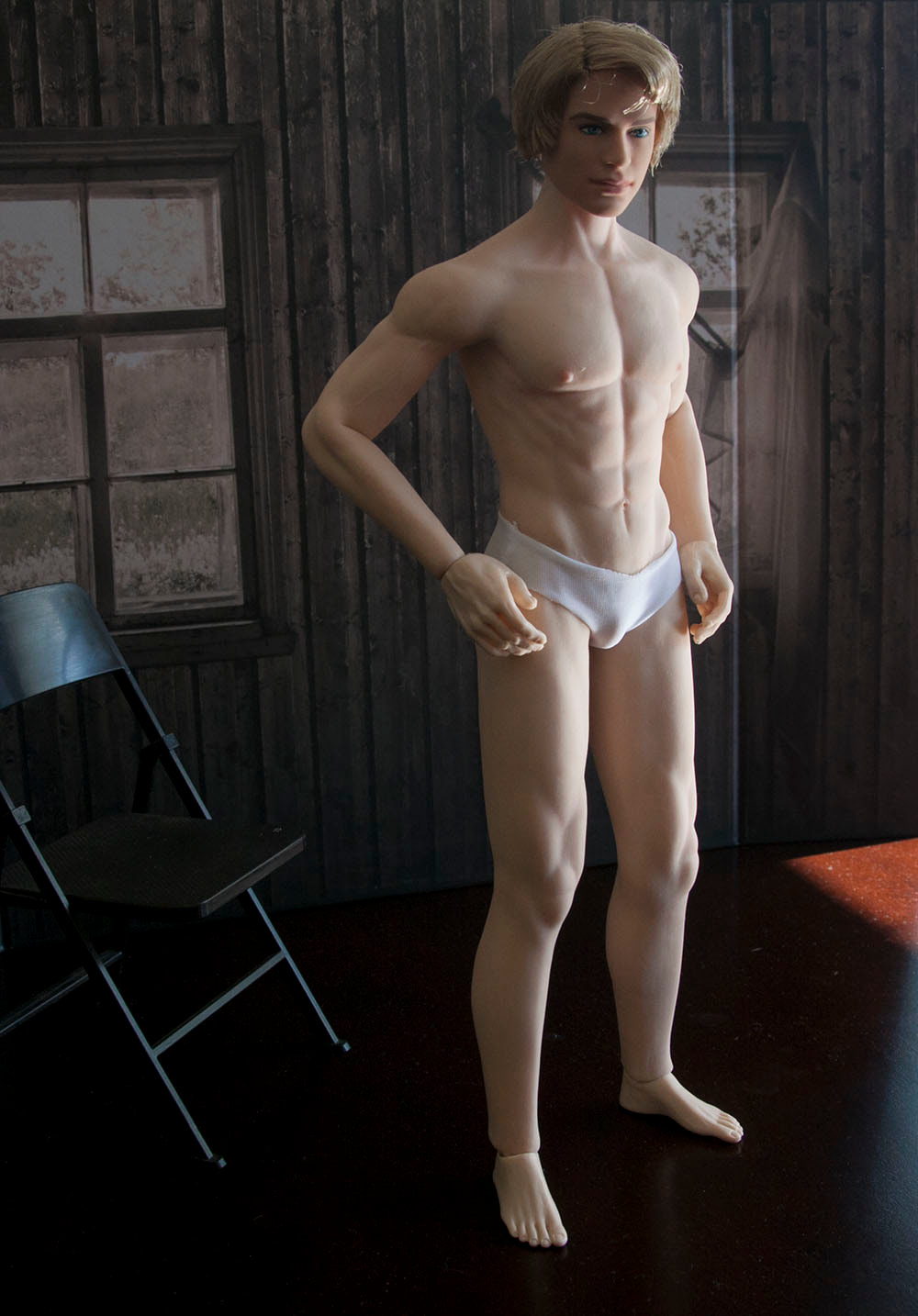 JD provide 2 pairs of "shooting" hands - left and right hand grips- and a pair of fists, in addition to the relaxed hands on the figure. My figure also included an extra pair of feet. All of these sculpts are very nice, with crisp details. They remind me of the sculpts on a male Volks figure from the early 2000s. I think they're a cut above the ones TBLeague uses.

JD also provides no less than 5 male anatomy sculpts. The largest looks as though it would work for a lager scale figure. 1/6th females would run from that thing out of self preservation. 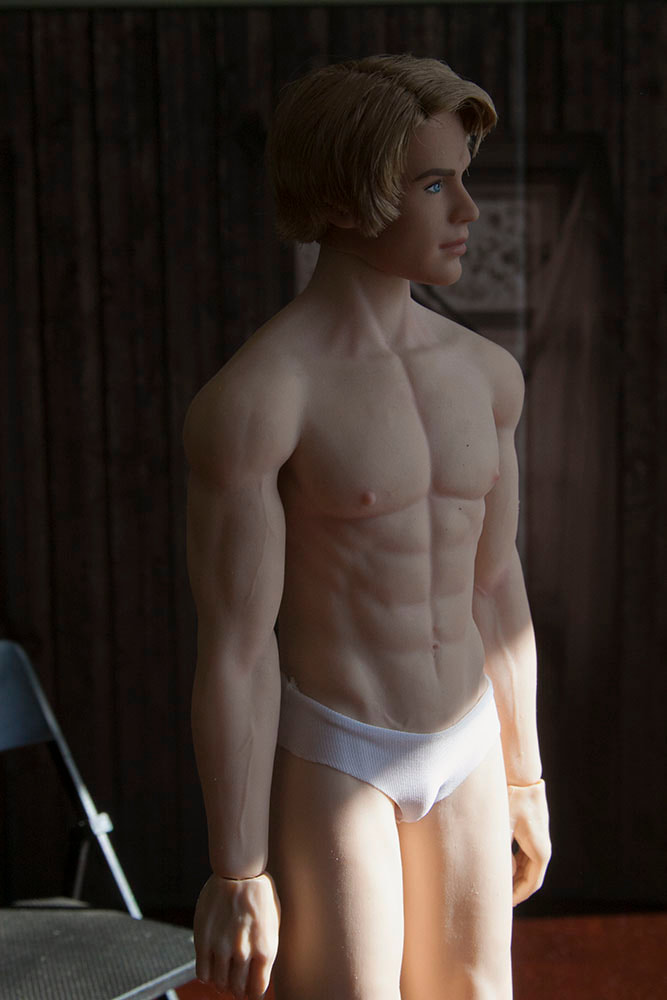 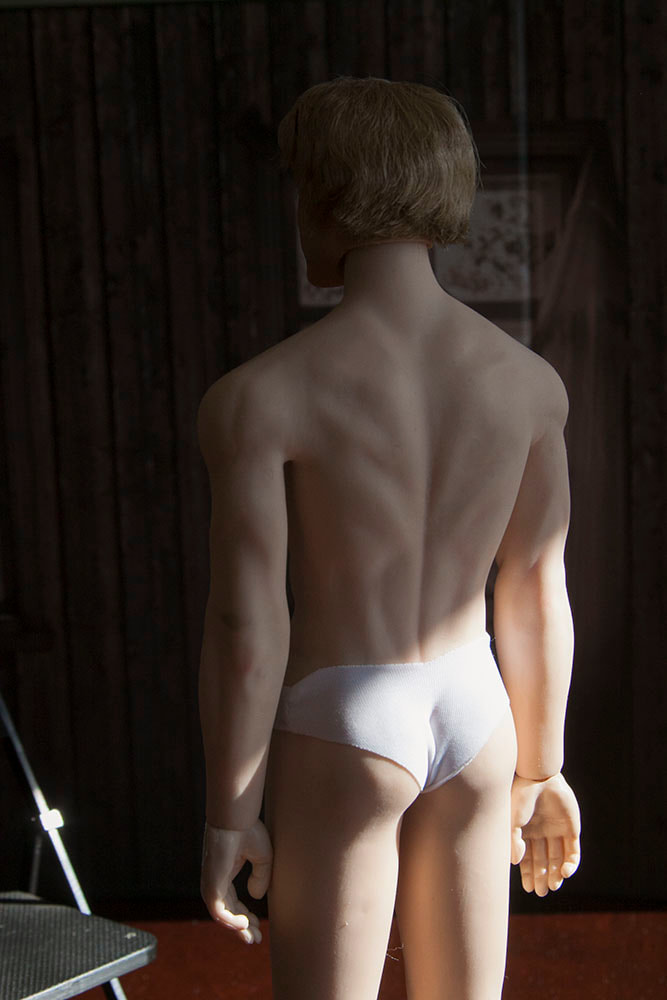 The body sculpting is very nice overall.  As with the female body I have, I think they did his abdomen really well. There is nice vein detailing on the body. I like that they didn't go crazy with the muscle sculpting on his back, yet provided very nice definition.

When it comes to posing, the body has smooth functioning joints, on par with TBL. I found the neck articuation a tad stiff, just as with the female figure. 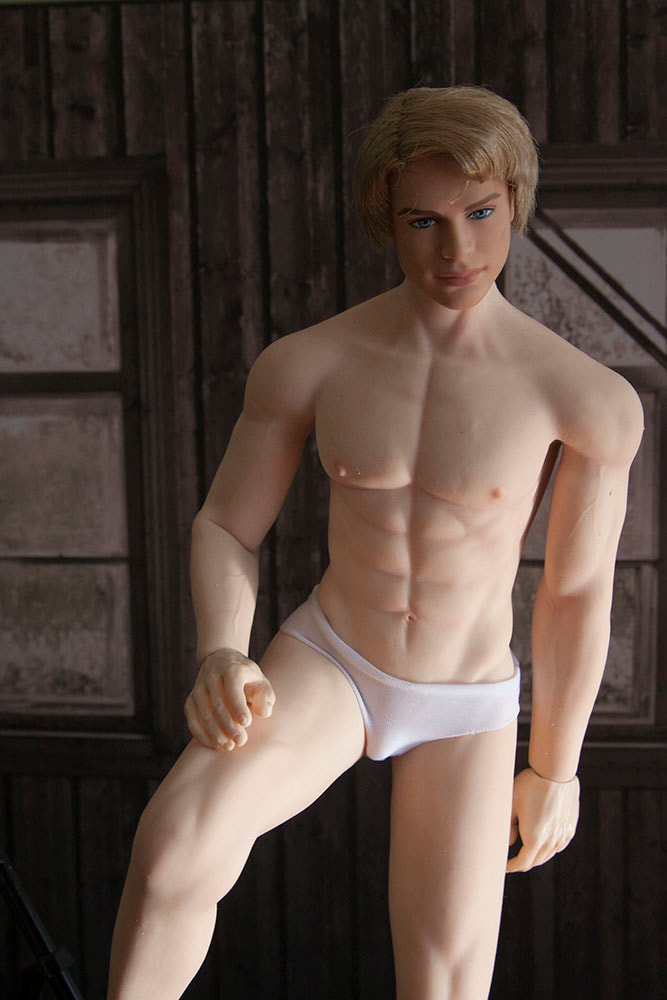 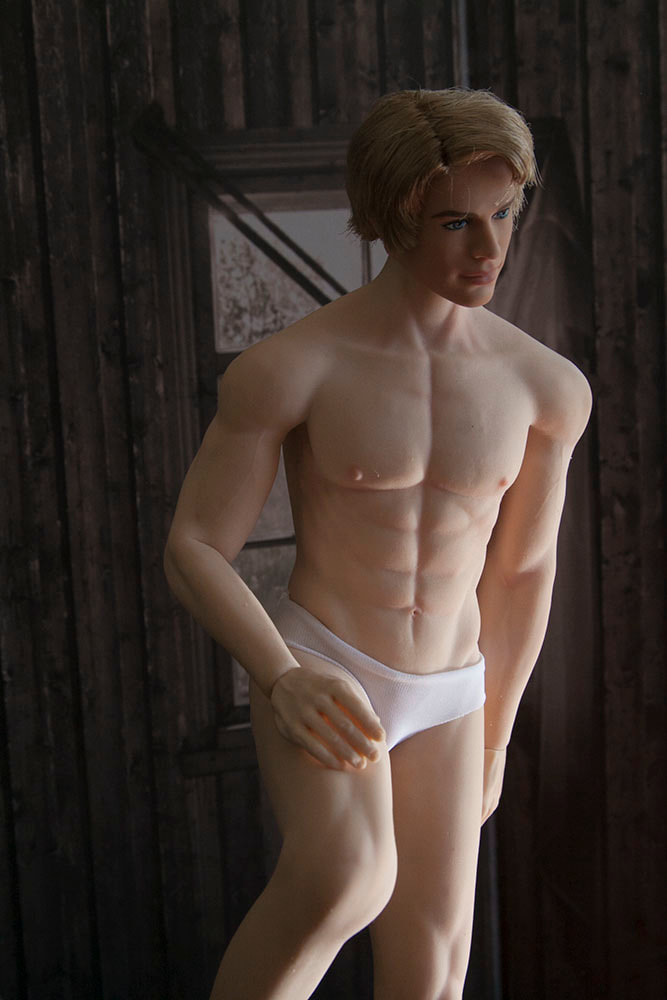 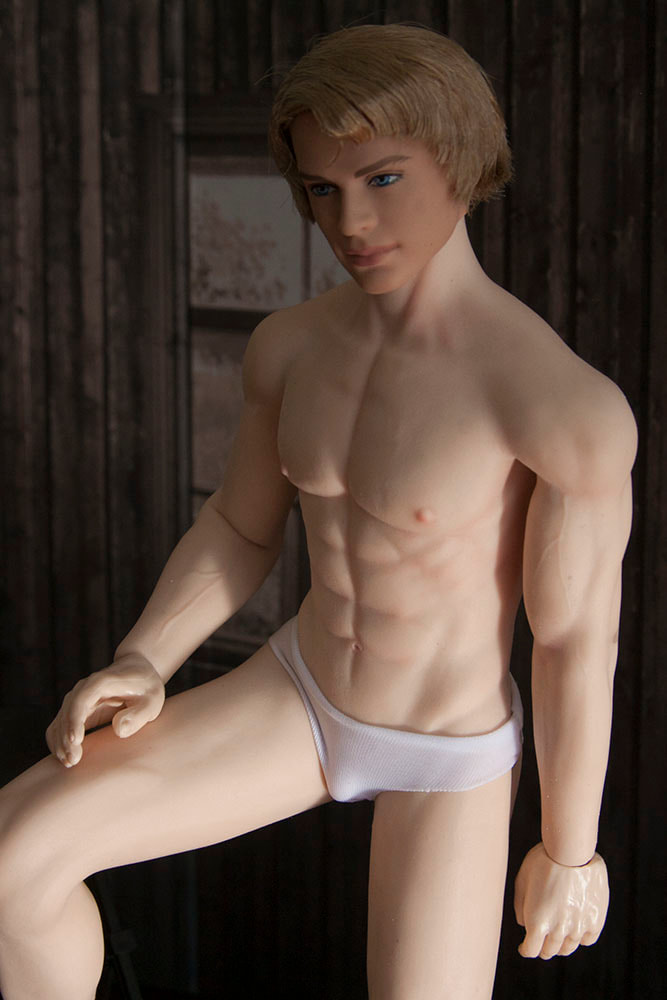 In practice, this JD figure poses as smoothly as my TBL males. He seems to have as much range of motion, and can easily be put in natural looking poses. 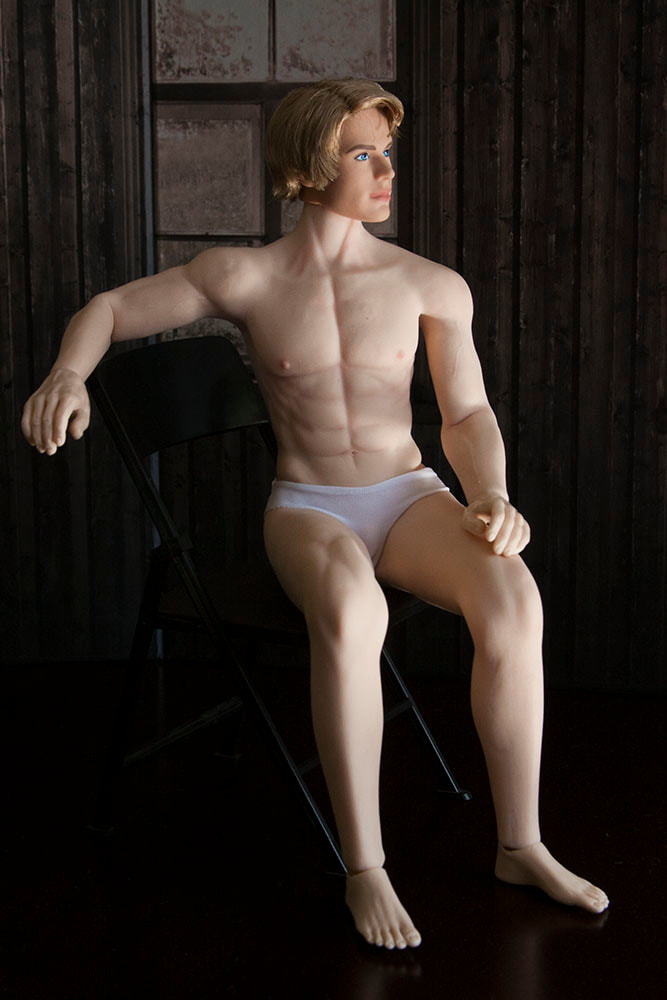 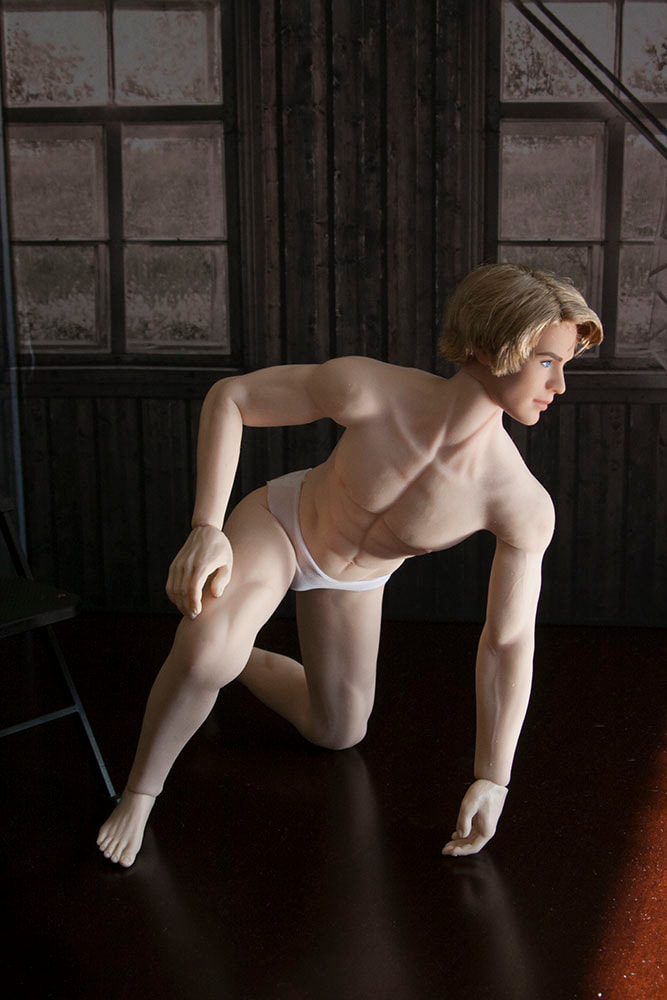 I"m really pleased with this figure so far. He's a lot of fun to pose, and I think his build will allow a wide range of clothes to fit. He looks different enough from my TBL guys to have his own identity. Who knows, he may even keep his Ken head! 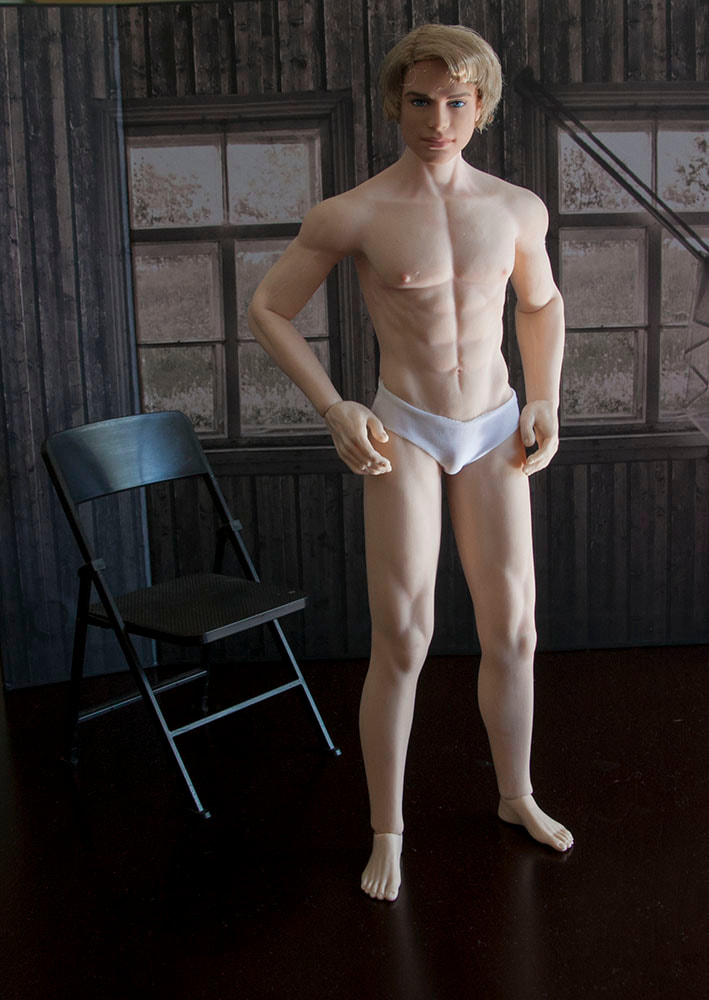