I've been waiting for this figure since it was announced. VC's female "shooter" line of figures has been among my favorites since their first one. Their equipment, clothing and head sculpts have been constantly improving, and I really like this latest one.

There are actually two versions of this set: version A is this brunette, and version B is the same sculpt but with blond hair. Their clothing is also different, both in terms of camouflage pattern as well as the types of top. Instead of the low cut style of version A, version B has a more conventional military style top that zips up to her neck.

With that, here's Jenner: 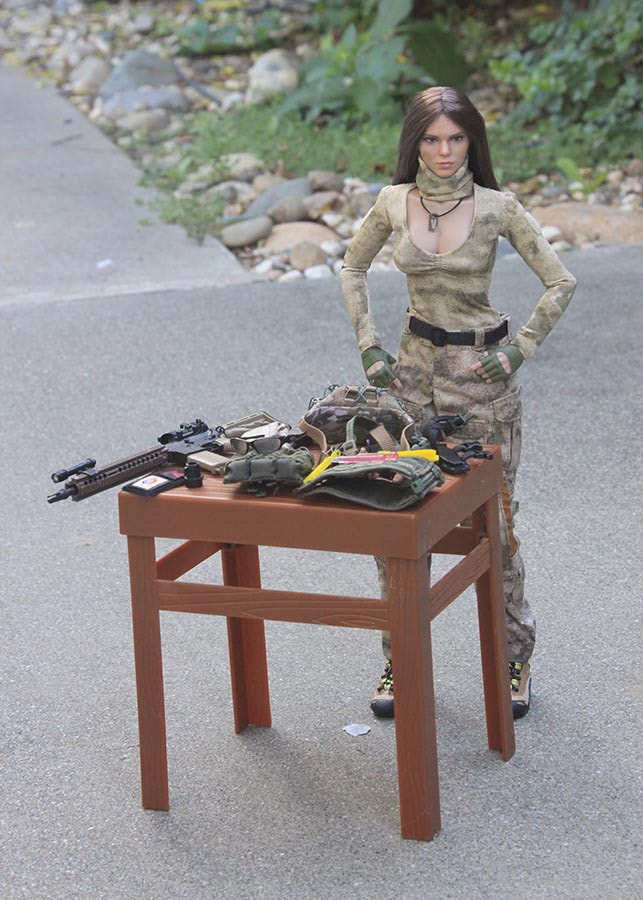 This line of figures has never been heavily loaded when it comes to accessories. The emphasis has been on keeping the figures "sleek" and usually including a stand-out piece. Jenner does seem a bit light on accessories. I should also point out that VC makes an optional K-9 accessory kit.

I have no facts to base this theory on, but I believe VC made a trade-off here. Lately they've been packaging their figures in an elaborate aluminum case. My feeling is in an effort to keep the figures within a certain price point, they've traded equipment for the case. I have absolutely no use for these cases; in fact, the vendor offered both a price discount as well as shipping savings for deleting the case. I was happy to delete the case for the savings. I really wish VC would ditch the case and give us a bit more in the way of accessories.

Back to Jenner, here's a closer look at her: 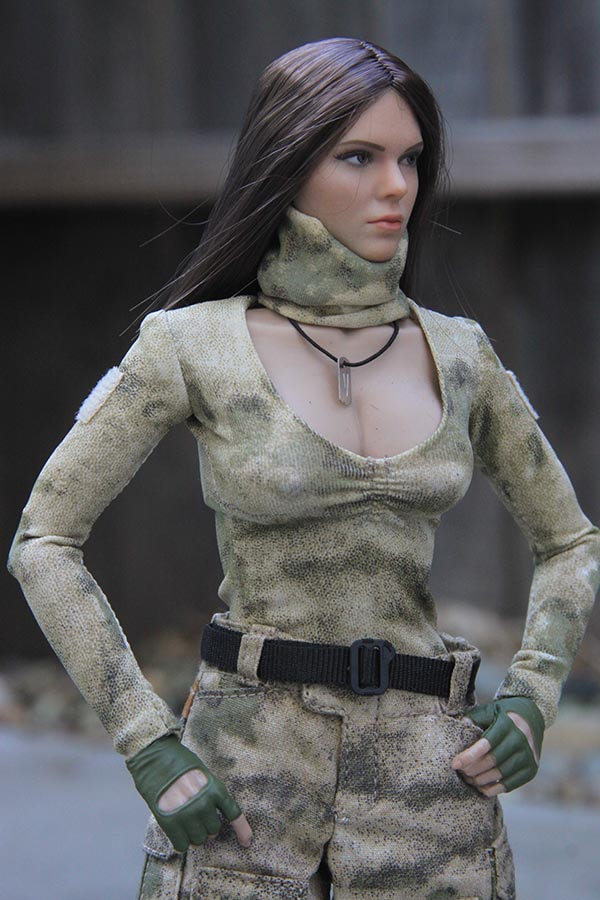 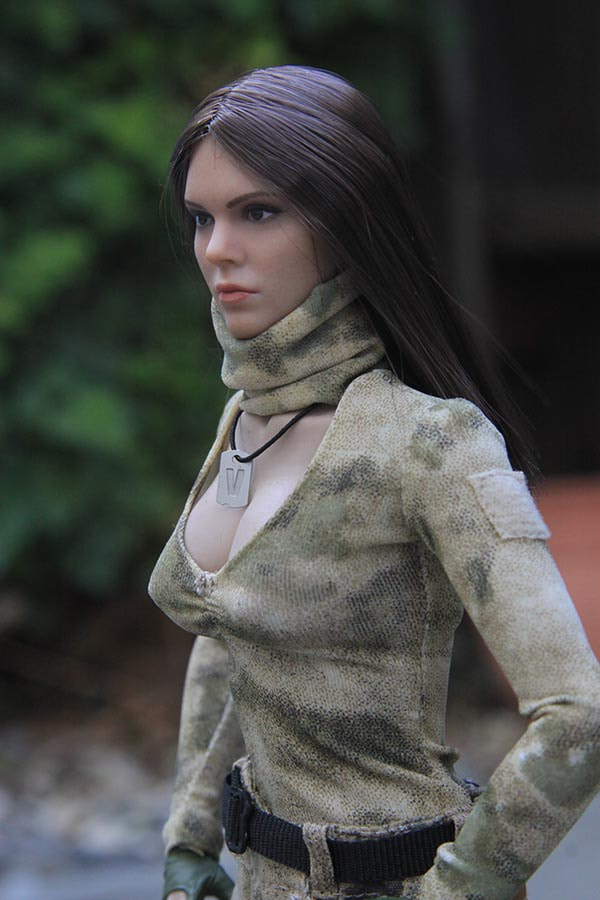 Clothing has always been a strong point for VC (I have some of their early outfits from before they marketed their own body design).  Jenner keeps up that reputation.

As an example, here's a look at her pants: 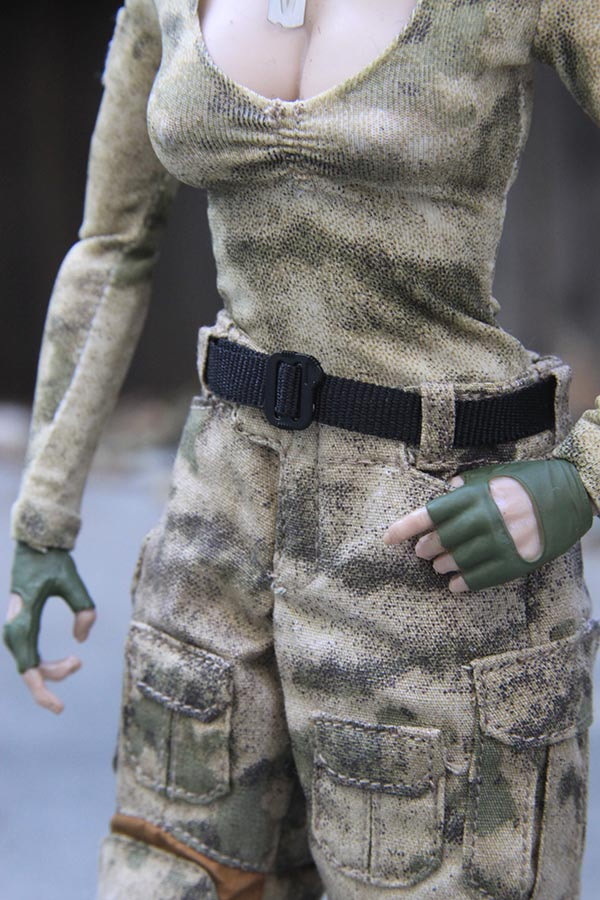 As you can see, not only are the details nice, the pockets are functional.  A difference that I've noticed with this latest release is that VC has made the pants in a roomier cut. 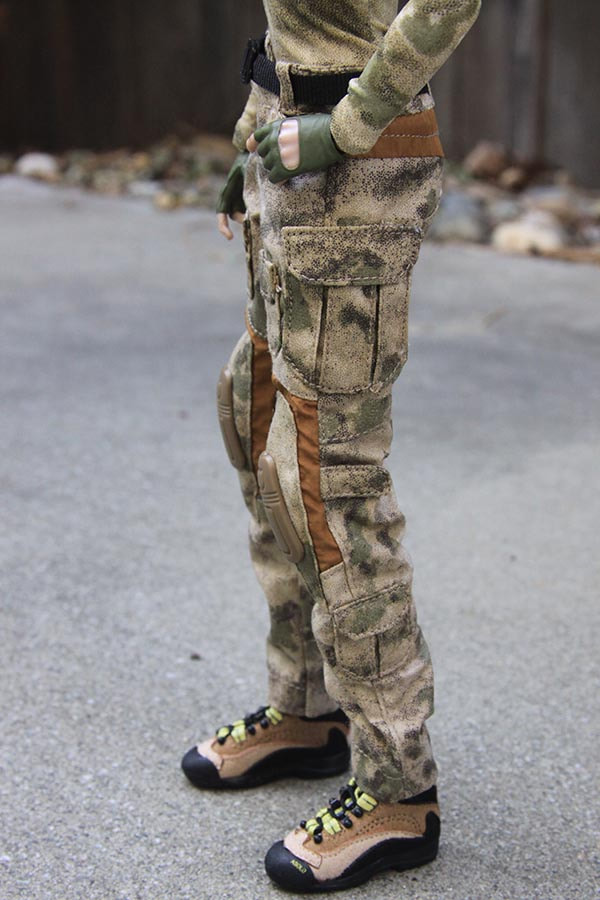 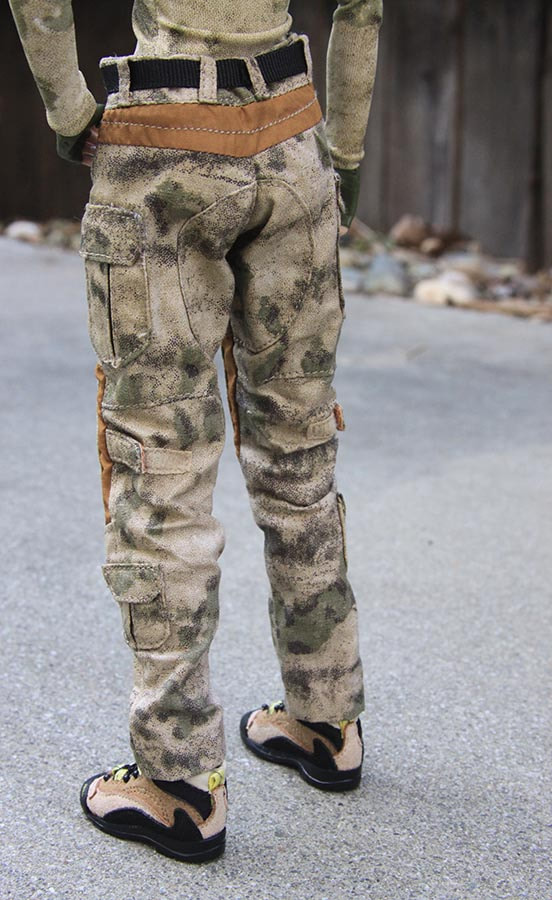 Not only does this add to the accuracy of making the pants look tactical, it allows the figure much more range of motion (the VC body has excellent articulation). I'm really glad that VC has moved away from making female tactical pants skin-tight; I wish other companies would do the same.  So do these new pants hit the mark? Here's a hint: look at where they fall relative to her boots. 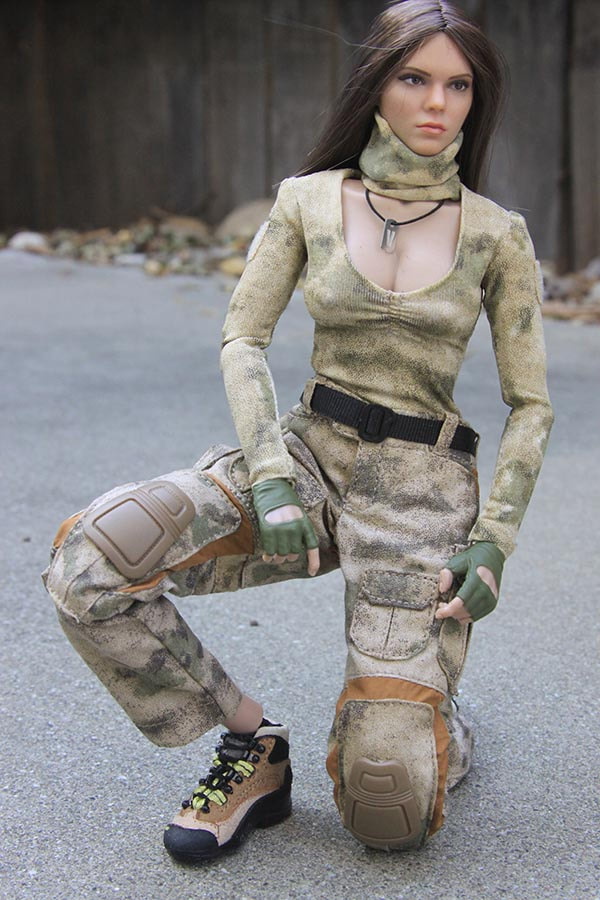 The answer is not quite. They made them in a more generous cut, but they need to make them longer! The knee pads should protect her knees. I plan on giving her some socks to diminish this effect.

Another area that VC has always been a leader is female boots. They started with fashion boots, and they've continued this level of quality into their military boots.  I think this style may have been introduced with one of the earlier shooter figures, but they're still great to have: 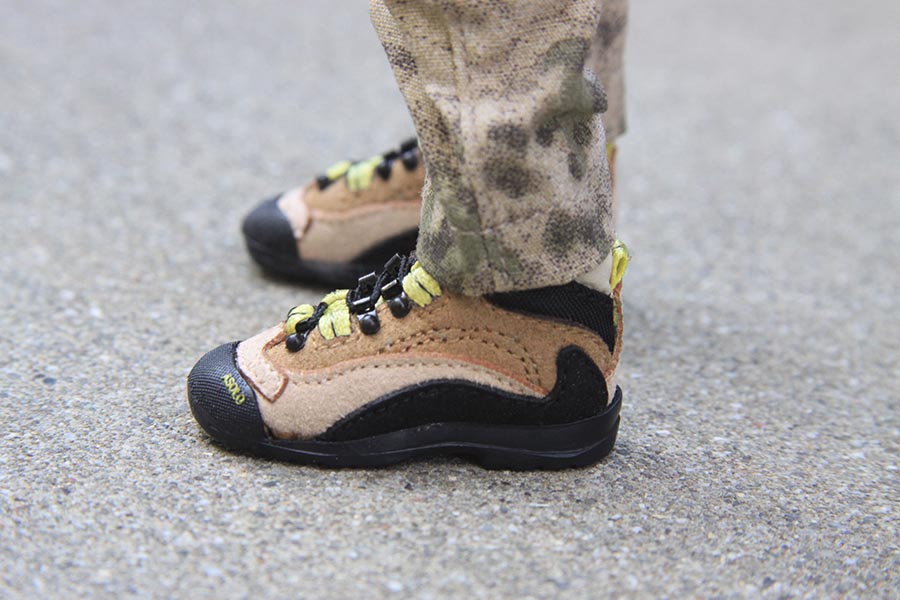 Incidentally, these boots work with feet (as I think all of VC's boots do).

Let's look at her accessories. 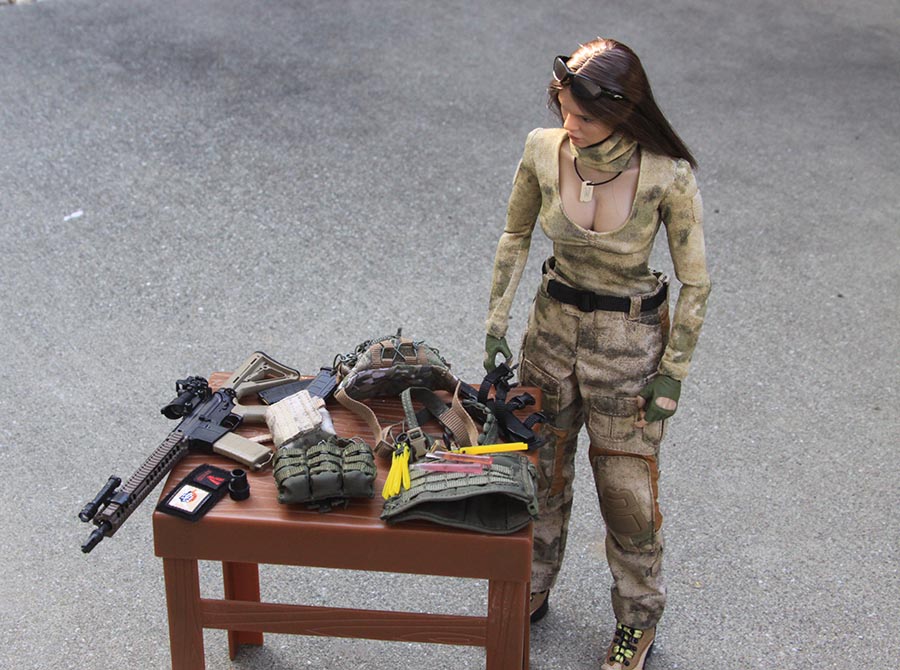 As I mentioned earlier, it's a bit light, and nothing is really unusual. None of it is bad, but you're looking at a what would normally be a $160+ figure. Maybe I'm just spoiled...

Have you ever wondered why they give us two spare mags when the pouch is designed to hold three? 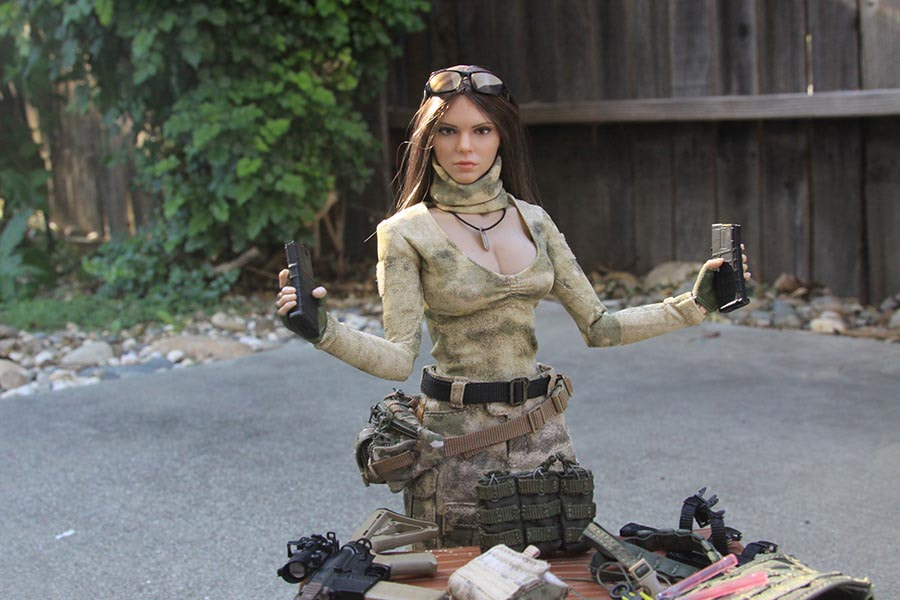 I do like the "fanny pack" , and I think this one is different from the earlier ones. 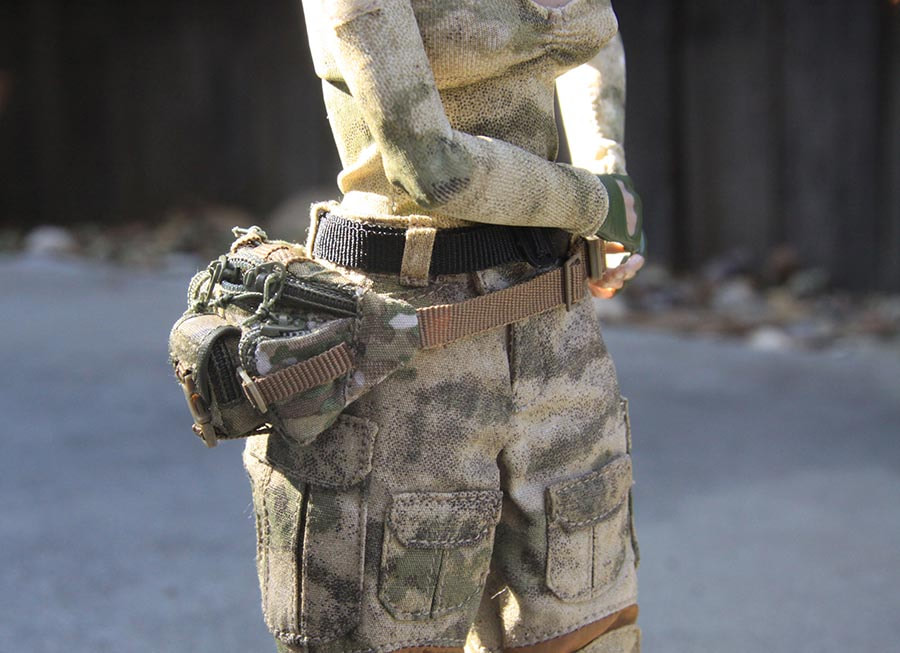 VC has been sourcing their fire arms from DAM Toys, and I think this is a great idea as they make excellent weapons. Here's a look at her M-4: 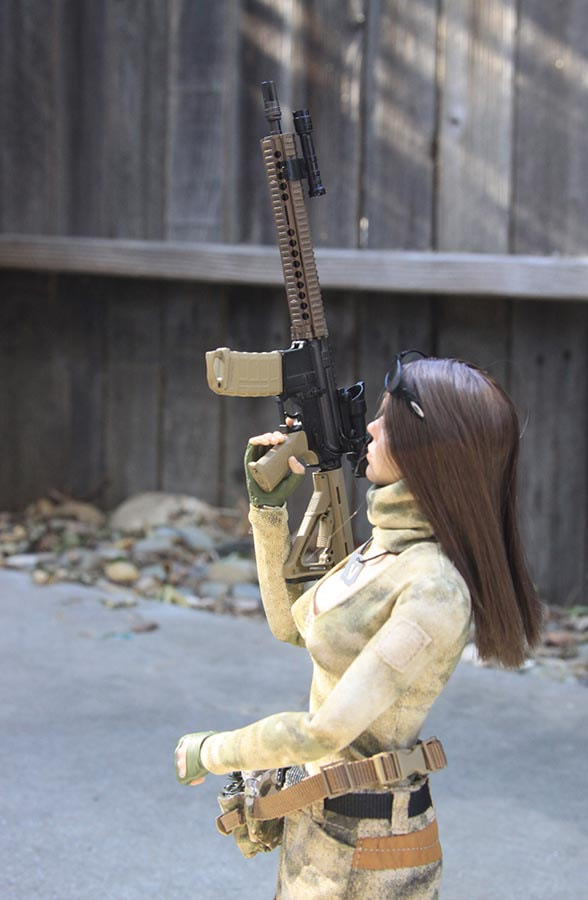 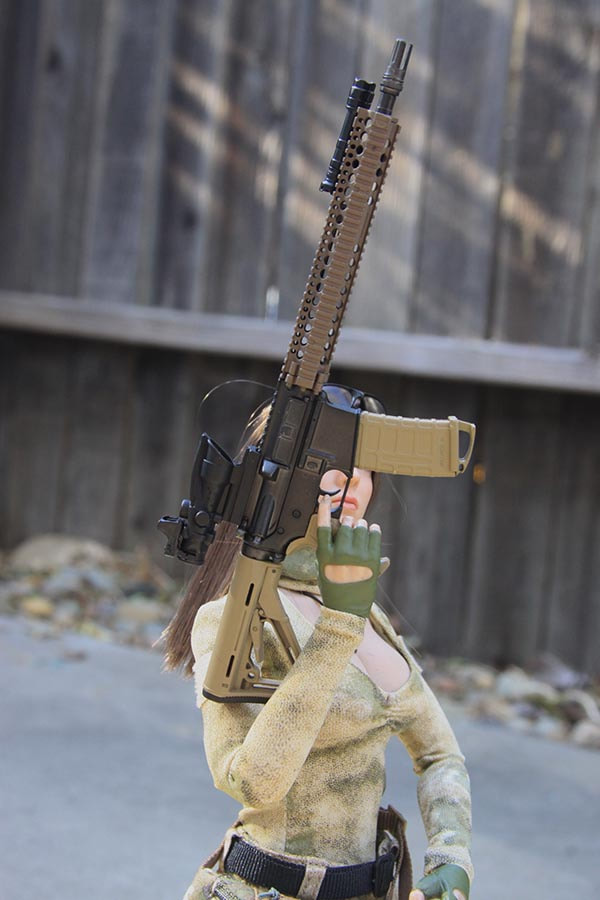 Nice crisp details, as one would expect from DAM Toys (even the door on the ejection port opens). Perhaps these aren't the "hyper" detailed items that DAM uses for their own figures, but they work fine for these figures. I will add a sling and a fore grip to this one. 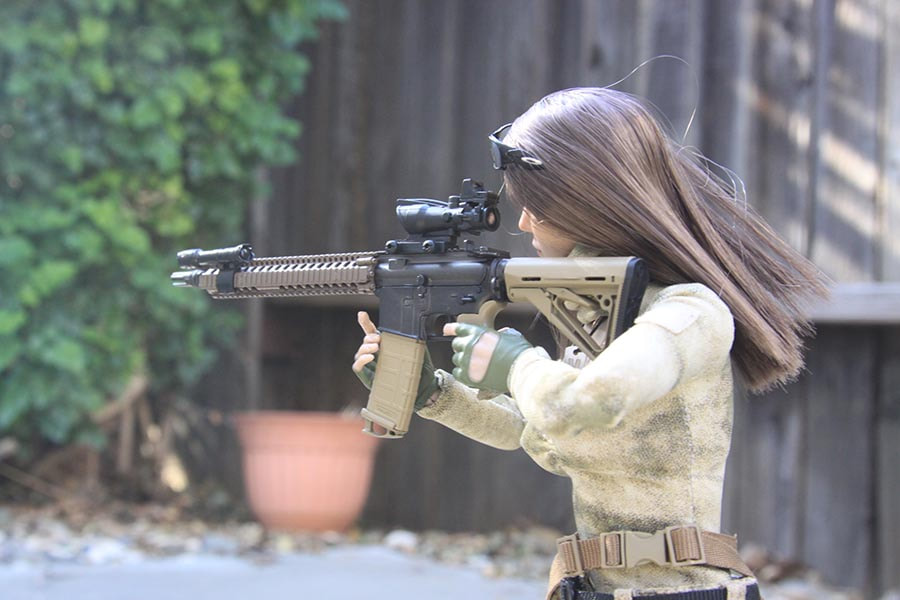 It was beginning to get hot so we moved inside...

She will definitely use the harness so we start with putting that on: 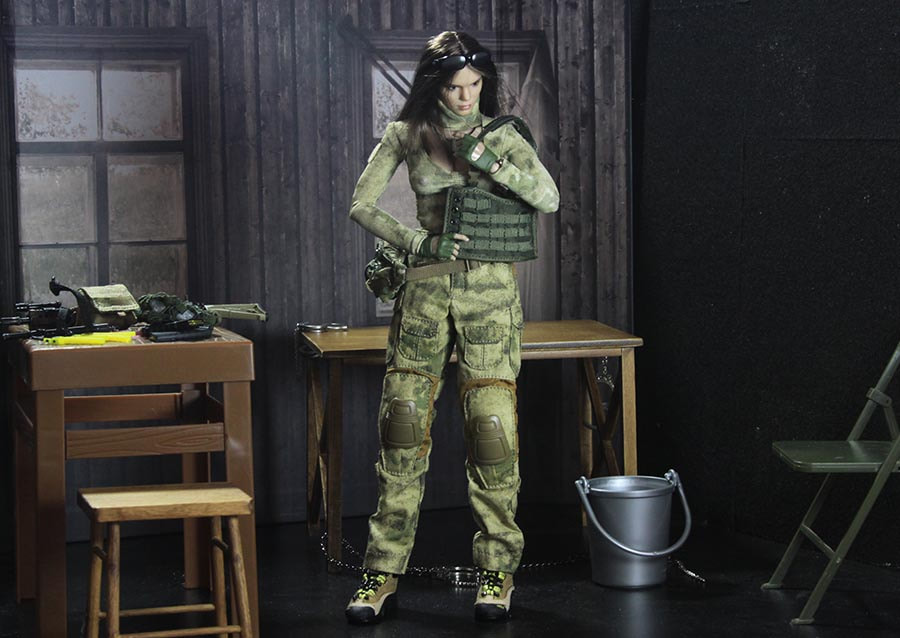 Hint: unless you like to lace tiny chord through eyelets, don't do what I did and remove it completely. This is especially true as there's a zipper in the front! 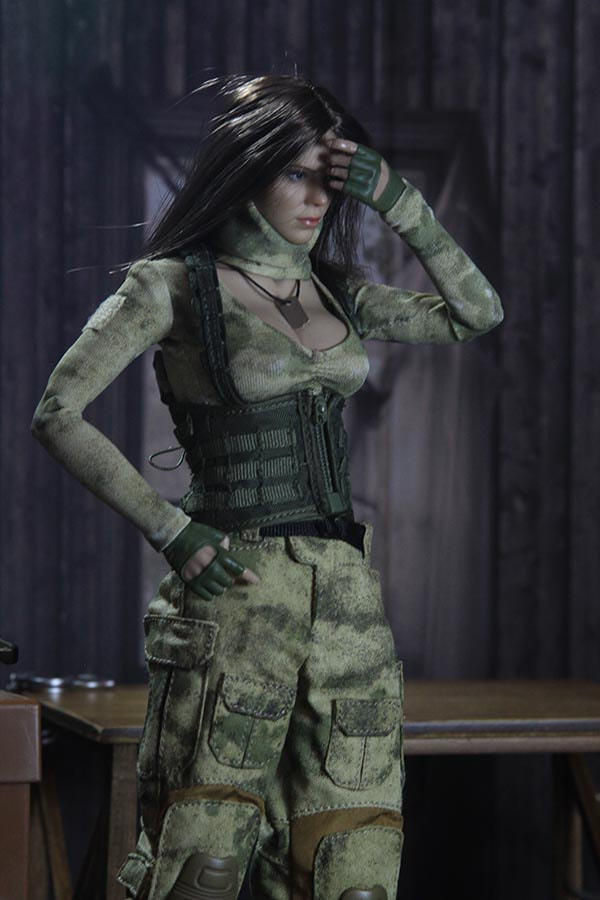 This is pretty much my progress so far, along with the fanny pack. The reason I haven't attached her pouches to the vest is that I plan on giving her a drop-down style ammo pouch assembly. In its place on her harness will be a radio pouch (which will also include a headset). I will probably attach her tan pouch on the right side of the harness. As it is, VC only provided a knife as her back-up weapon; I will give her a side arm in a drop-down holster on her right thigh.

My overall impression is that I'm really happy with this figure, especially since I did get her for less than MSRP thanks to deleting the aluminum case. I will say that the prices of these figures is exceeding what I expect for  a lightly equipped operator. As I look at this sculpt, the more determined I am to use her as an upgrade for one of my existing agents.
UPDATE: ABOUT A WEEK LATER

I've been continuing to work on equipping Jenner. Some of the challenges are really unexpected: I never knew a simple rifle sling would take so long to source. None of the ones I have on hand have worked, for one reason or another. Some are too long, and look odd when adjusted all the way down to fit Jenner's frame. The single point slings tend to allow the muzzle to almost touch the ground. I think I've finally resolved this little set-back with a new sling on order.  For this update, she still has to keep her hands on the rifle. 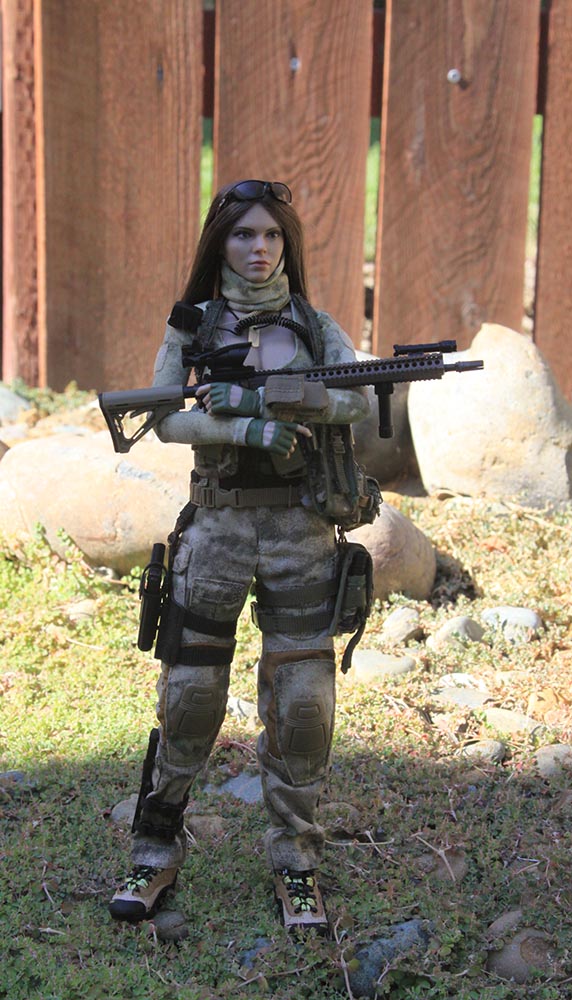 The other unexpected challenge turned out to be the radio. I have a variety of radios, but choosing one that works with how I envisioned Jenner proved a bit tough. Again, some seemed huge when attached to her harness, or the mic wouldn't clip on properly. 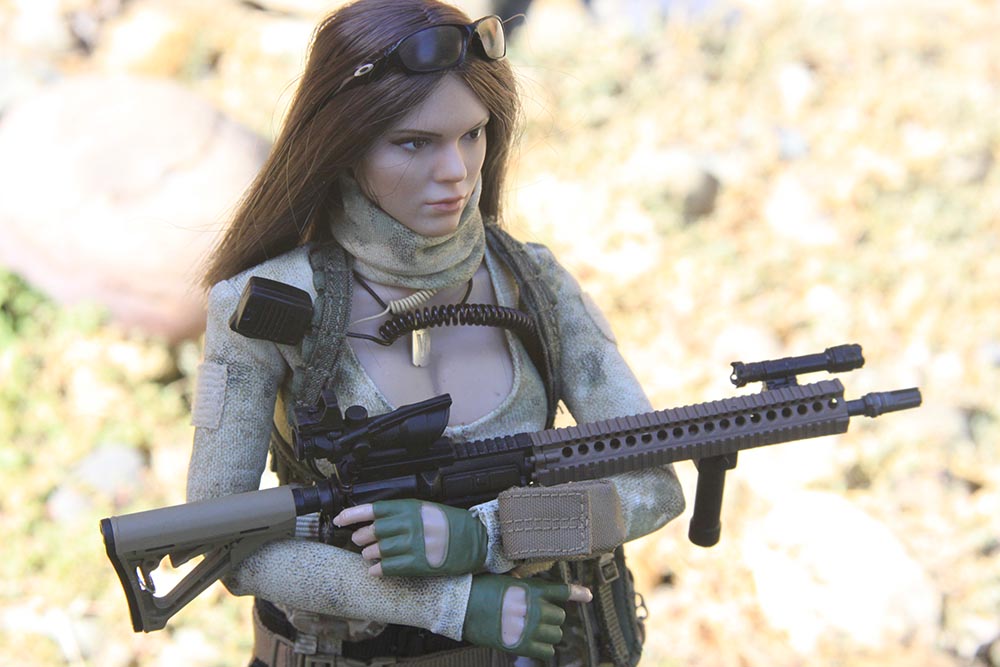 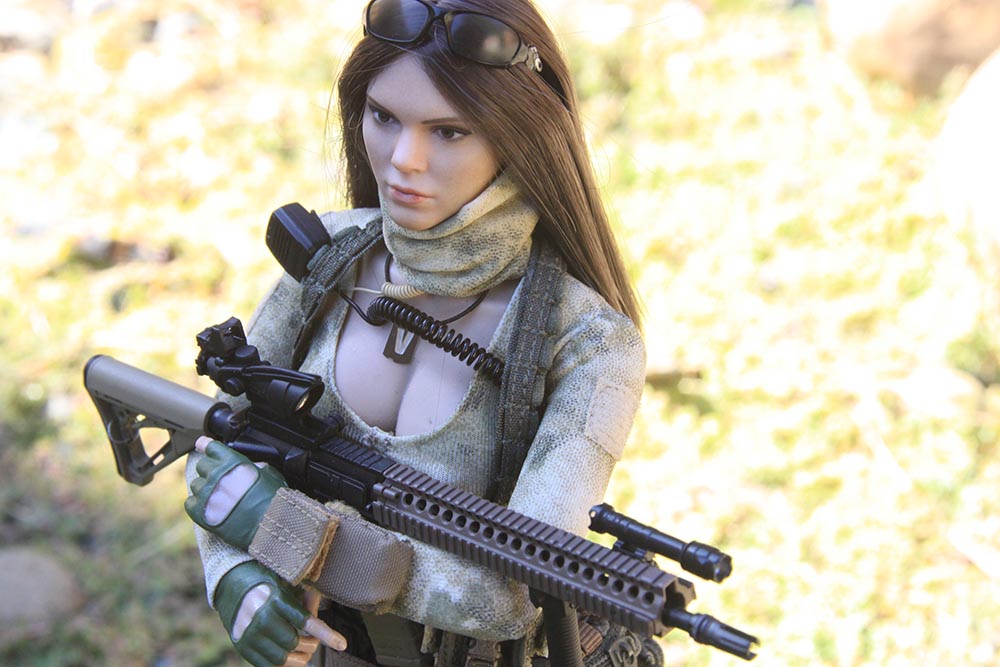 The straps of this harness are too thick for any mics to clip on to it. I thought the little strappy things were loops for attaching things, but they're just there for style, apparently. Finally, I cheated by placing the mic wire under the strap, as you can see above. This set uses an ear bud, that naturally won't stay in her ear. I routed that wire under her neck gaiter and allowed the ear bud end to disappear into her hair on her left side.  This has got to be an uncomfortable arrangement, but she's tough. That it's a parted out item from one of her rival DAM Toys Combat Girls is a tough pill to swallow, but she's tough.

I really wanted to use her triple magazine pouch. It uses molle straps, and VC must intend for it to attach to her harness. To my eye, it looked kind of bulky there; I thought I would use a drop-down molle platform to attach it. Turns out the molle platform I have is grayish black; I'm still not satisfied it would be the way to go. Jenner has to satisfy herself with  yet another item sourced from her rival, and a double magazine pouch at that. 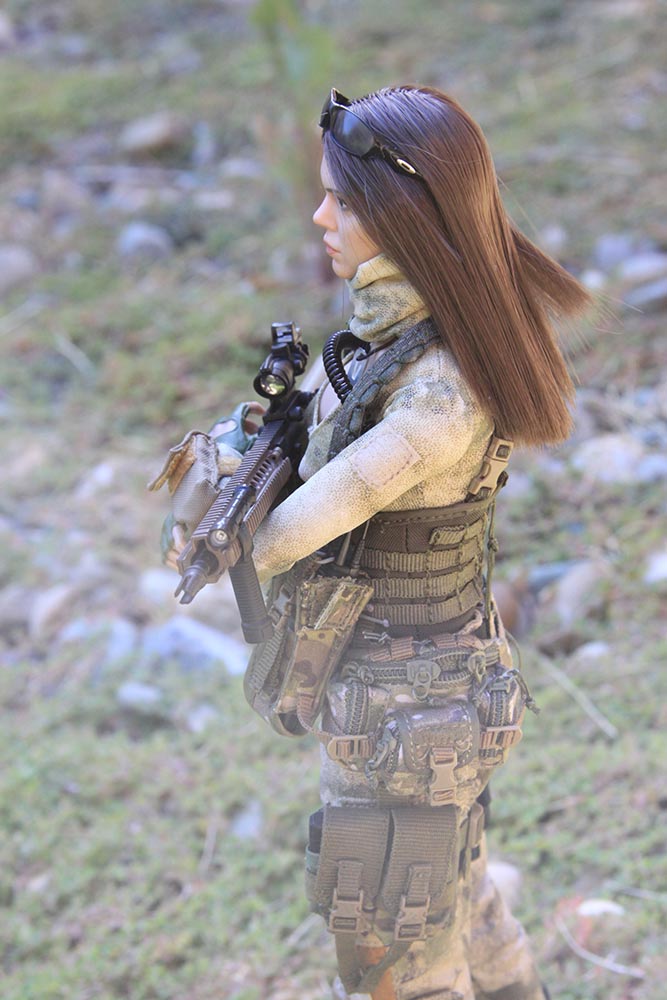 The side arm solution went much more smoothly. I went with a drop down holster from Art Figures, but I didn't like the matching G17 automatic so I chose one from Easy and Simple (yes, we went first class). 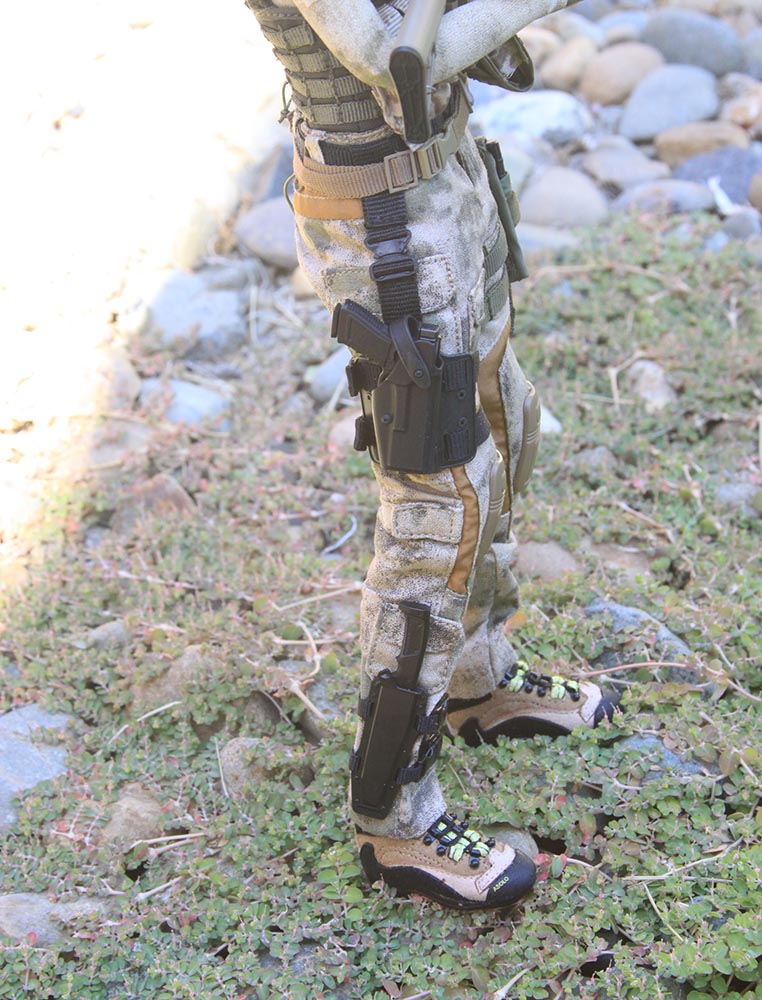 That's where I stand on this little project so far. Some things I'm thinking about are a water bottle or canteen, and maybe a hat. 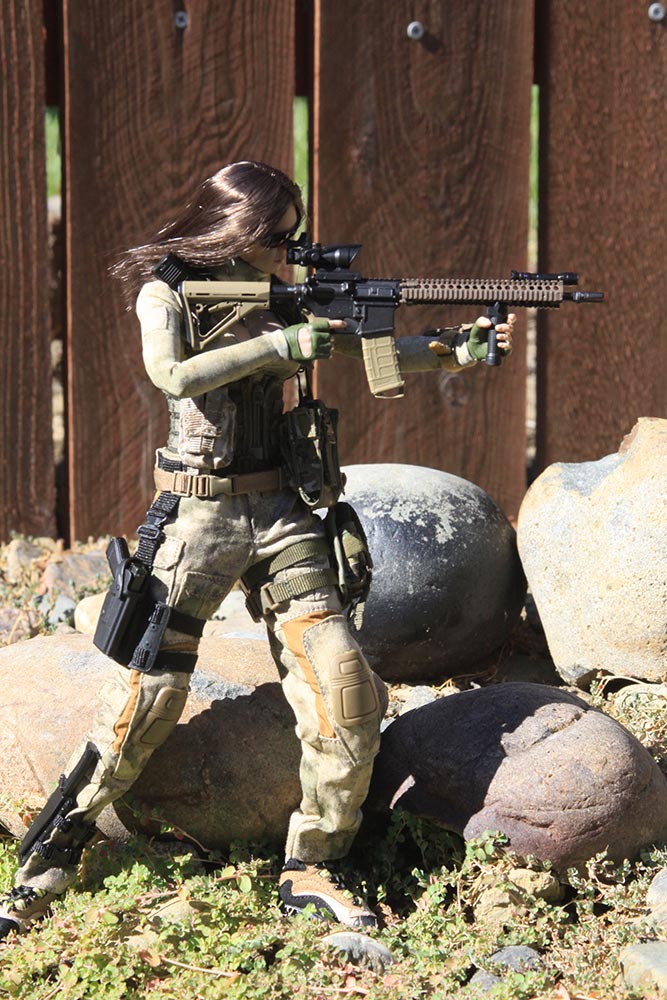 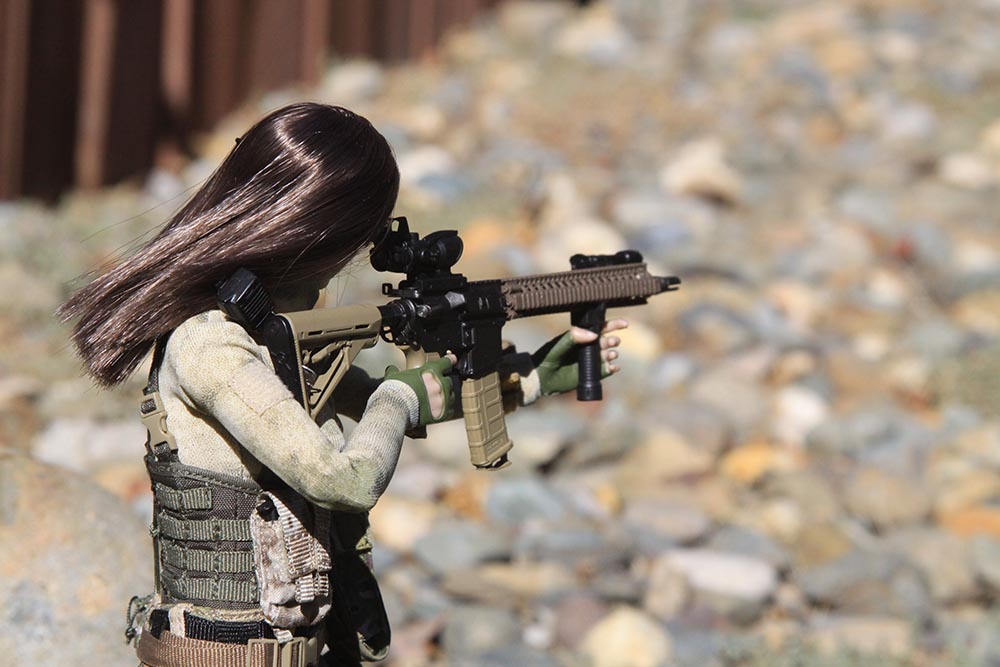 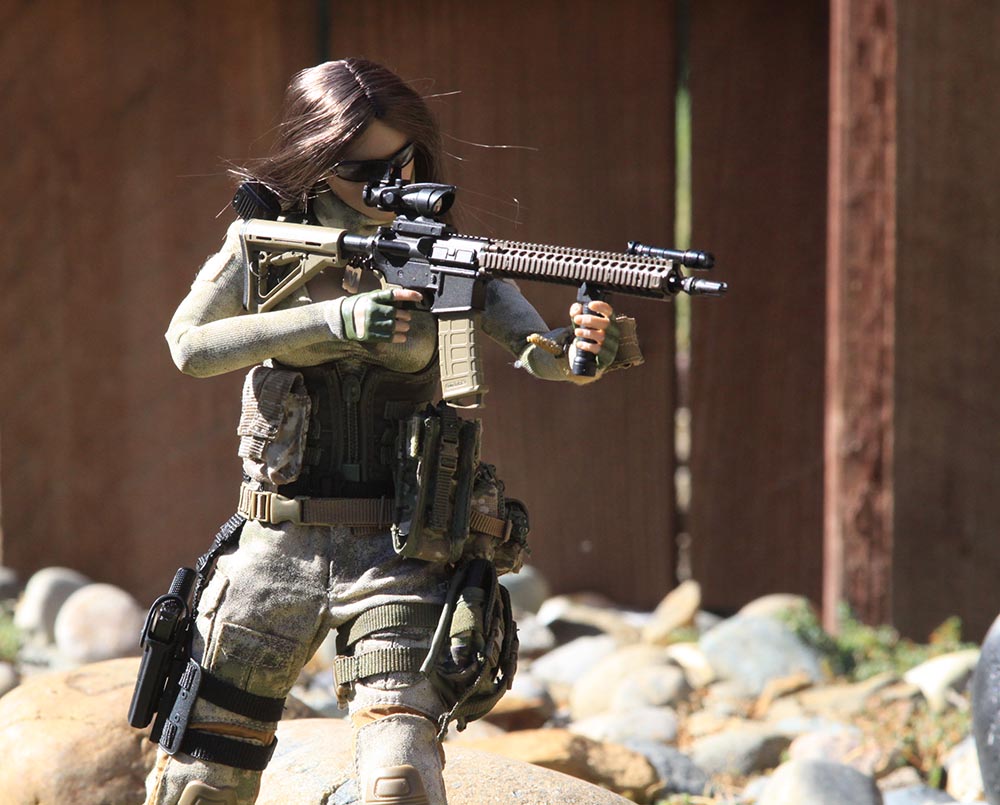 ...and I'm thinking the rifle looks really stripped down...