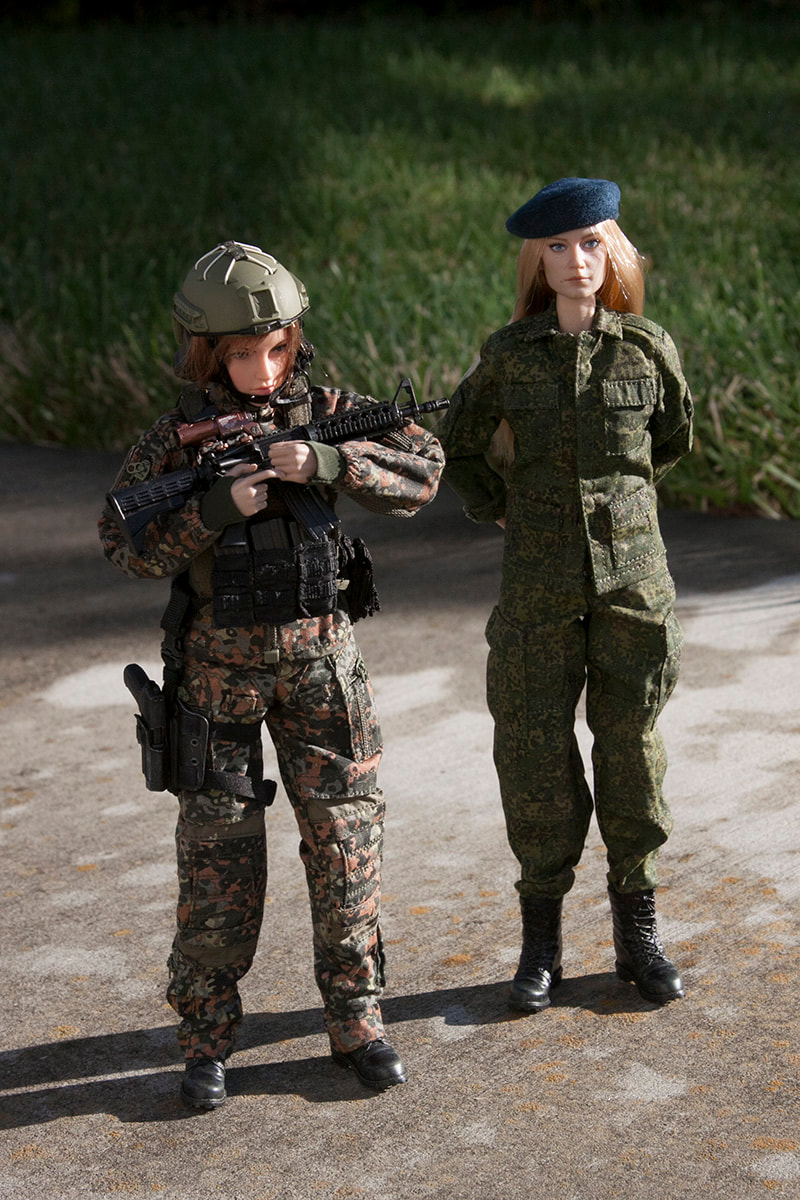 I'm still hesitant to spend the money on Kerr because I'm not really sold on the head sculpt. It's not due to deficient quality; it's the smiling expression doesn't work for me.  As of now, this set will be a kit bash for me.

Natalia is among those figures that "got away". I really meant to buy this set, but they sold out quickly and I could only find them parted out.  Buying a figure from parts is a very expensive option so it came down to what I could find that I was willing to pay for. Her head typically sells for US $50+. It's nice, but not that nice.

Let's look at Flecktarn (I still haven't named her) first. She has a Super Duck head and a DAM Toys body. 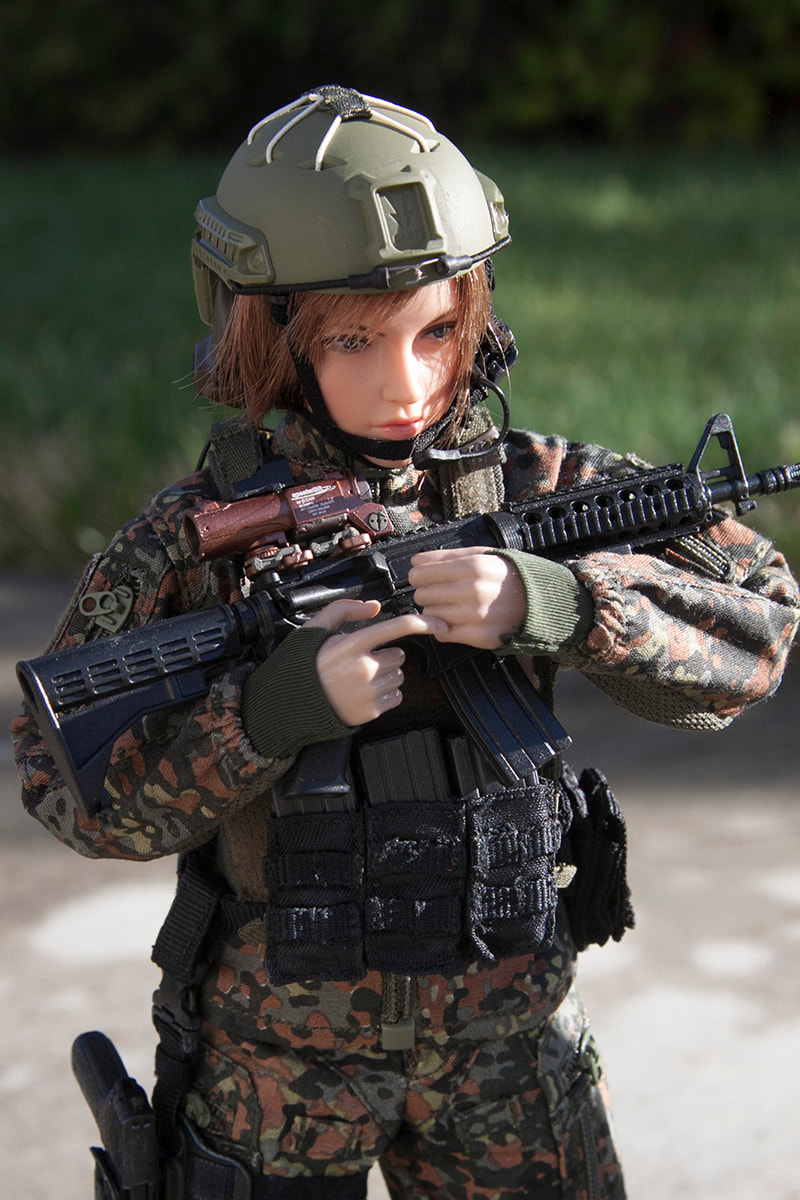 Very Cool makes some of the nicest female uniforms, and they don't disappoint with this Flecktarn camouflage pattern. It's a current pattern, and it has a lot of interesting details. One of the things I like is that the cuffs of the jacket sleeves form fingerless gloves. The jacket itself has an interesting material that runs along the undersides of the sleeves and down the sides of the jacket. The whole uniform has crisp detailing and nice, scale zippers. 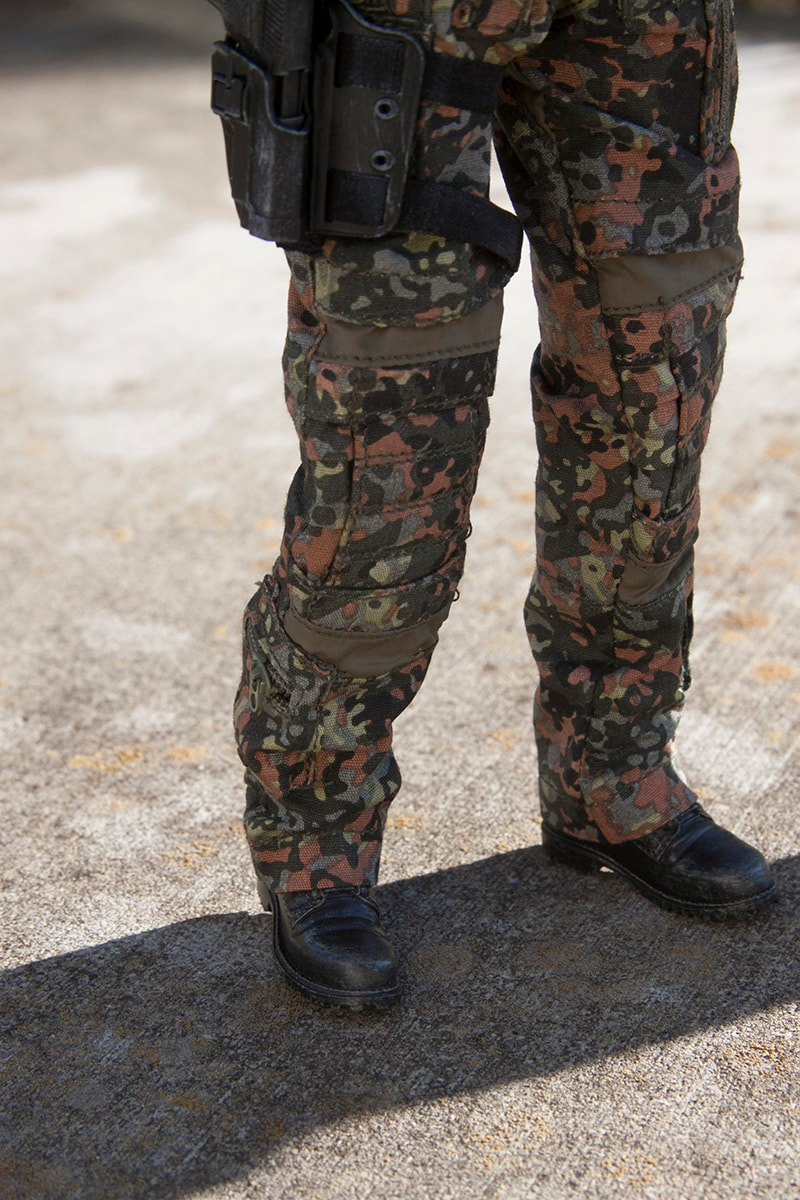 One of the first things I noticed is Very Cool got the length of the legs right. This is often a shortcoming in female military BDU type uniforms. Now, I do have to point out that I have used a DAM Toys body for this figure, but it's very similar in proportions to the Very Cool body. I like the angled pockets on the lower legs, reinforced knees, and pockets with vertical zippers. Her boots are DAM Toys from the Russian Airborne trooper Natalia. I can't remember who made the weathered holster. Her M4 is from another Very Cool set. 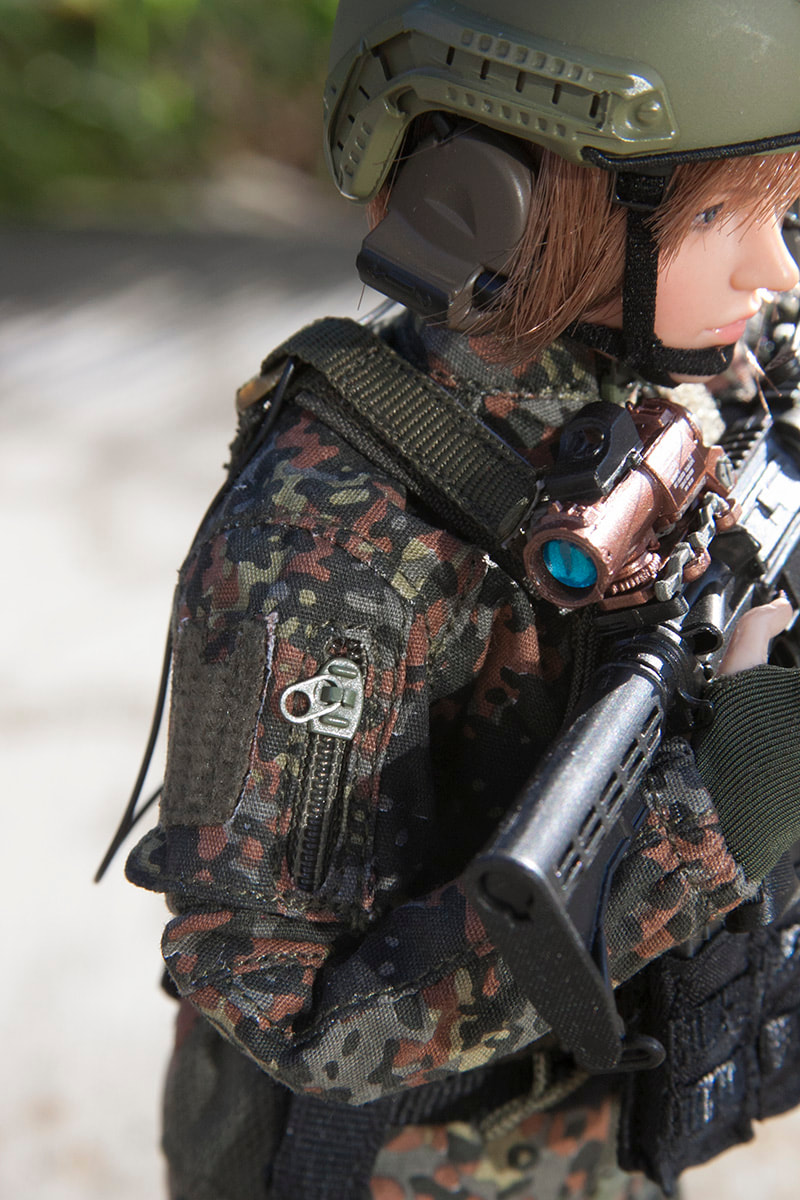 A view of some more of the details of the jacket: pockets with vertical zippers, and velcro pads for insignia. I did purchase the red beret that is part of Kerr's set, as I felt it would be a neat detail that would help set her a part. I was hoping to make her look like some of the troops I've seen on patrol in Europe. Unfortunately, the beret is another example of the difficulty companies have with making caps that fit female figures with rooted hair. It's so small that it would be a tight fit on a small male sculpt with molded hair. The ballistic helmet is from Easy And Simple, and intended for a male head sculpt. These helmets also fit female heads with rooted hair, which is an advantage as helmets for male figures are very common, and available in a lot of configurations.  I would like to equip her with a more current H&K rifle, though I kind of like the M4. It does need a sling, though. 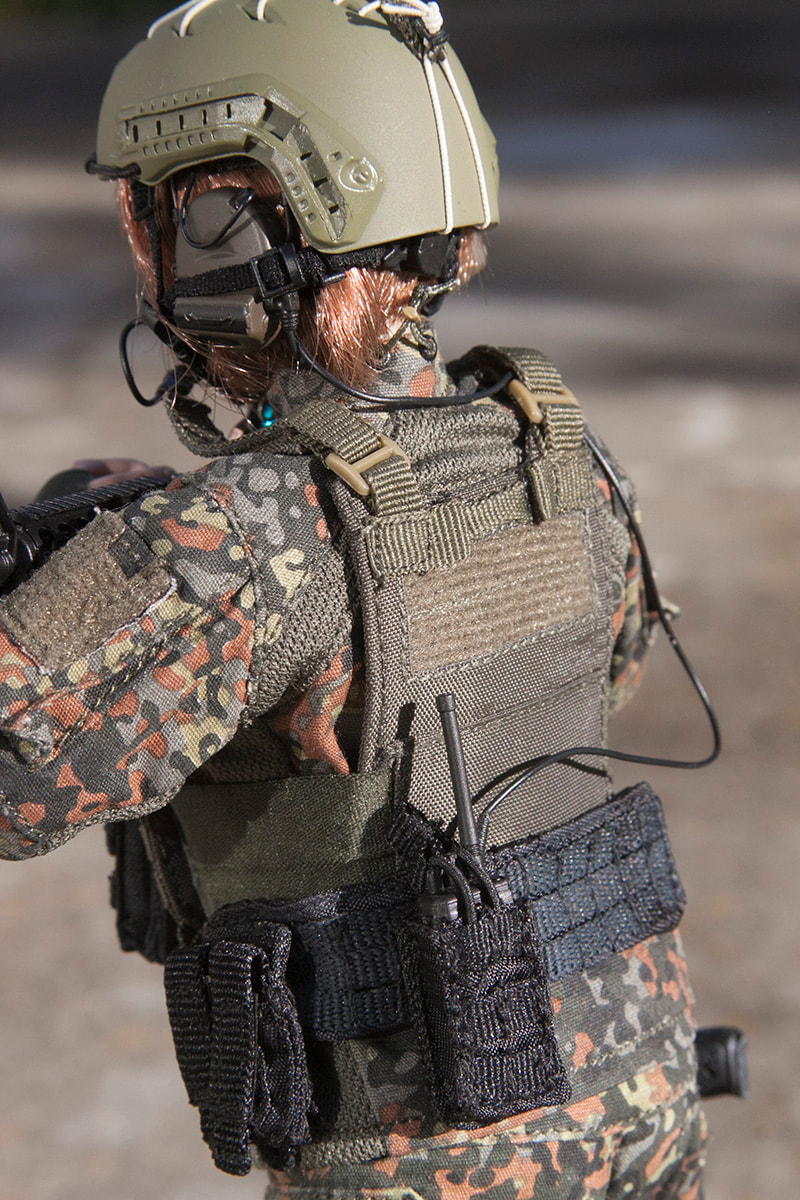 It's nice to have body armor tailored for a female soldier. This one is pretty simple and helps keep the figure from being overloaded. It has a molle set up in front for the mag pouches that are part of this set as well. The battle belt is from Fire Girl Toys as are the pouches. The radio and headset are pieces from various sources. 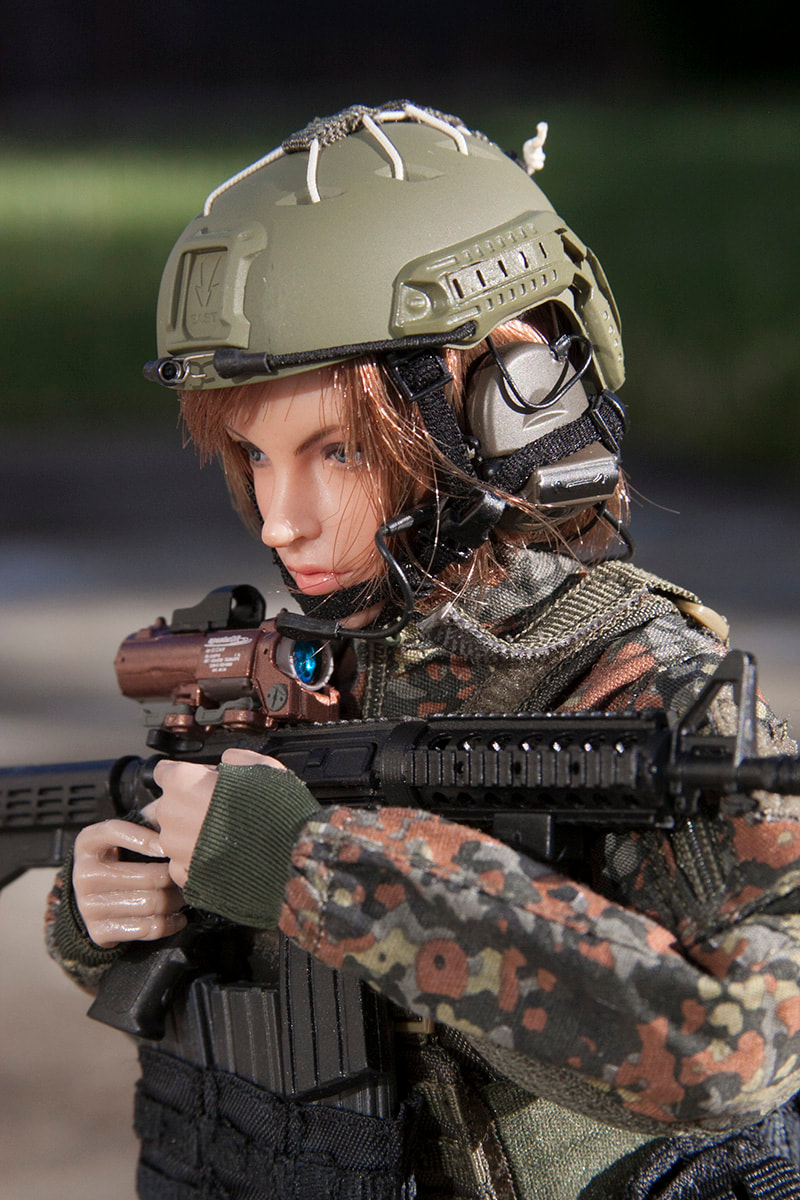 This is about where I have "Flecktarn" so far. She seems to be too much of a regular troop to be a part of my irregular female shooters. She may become a part of the regular army troops of the fictitious country in the saga.

Unlike Flecktarn, DAM Toys Flora is a character in my saga. She's Irene, a female National Police Officer. Her sculpt is from the Very Cool WWII Russian soldier (a set I really wish I had purchased). She uses a Very Cool body, which works well for the uniform she wears when she debuts in the saga (which is a mix of VC and Alert Line parts).  I just thought I would offer this explanation for why I have a DAM Toys body in a Very Cool Flecktarn uniform, and a Very Cool body in a DAM Toys Flora uniform.  It's routine in my upside down and inside out world.

Whereas Flecktarn is pretty much geared up, I've just started with Irene.  So far, the only part that isn't DAM Toys is her beret. Just as with Flecktarn, I purchased the light blue beret that came with the DAM Toys set, and it's way too small as well. Two different companies with well earned reputations for making quality items, can't seem to make berets that fit their figures. The beret she's wearing is from the Alert Line WWII Russian female sniper set. I still need to adjust it a bit, but I'm just grateful it fits.  Even though it's the wrong shade of blue, Irene isn't a Russian soldier; she represents a fictitious country. 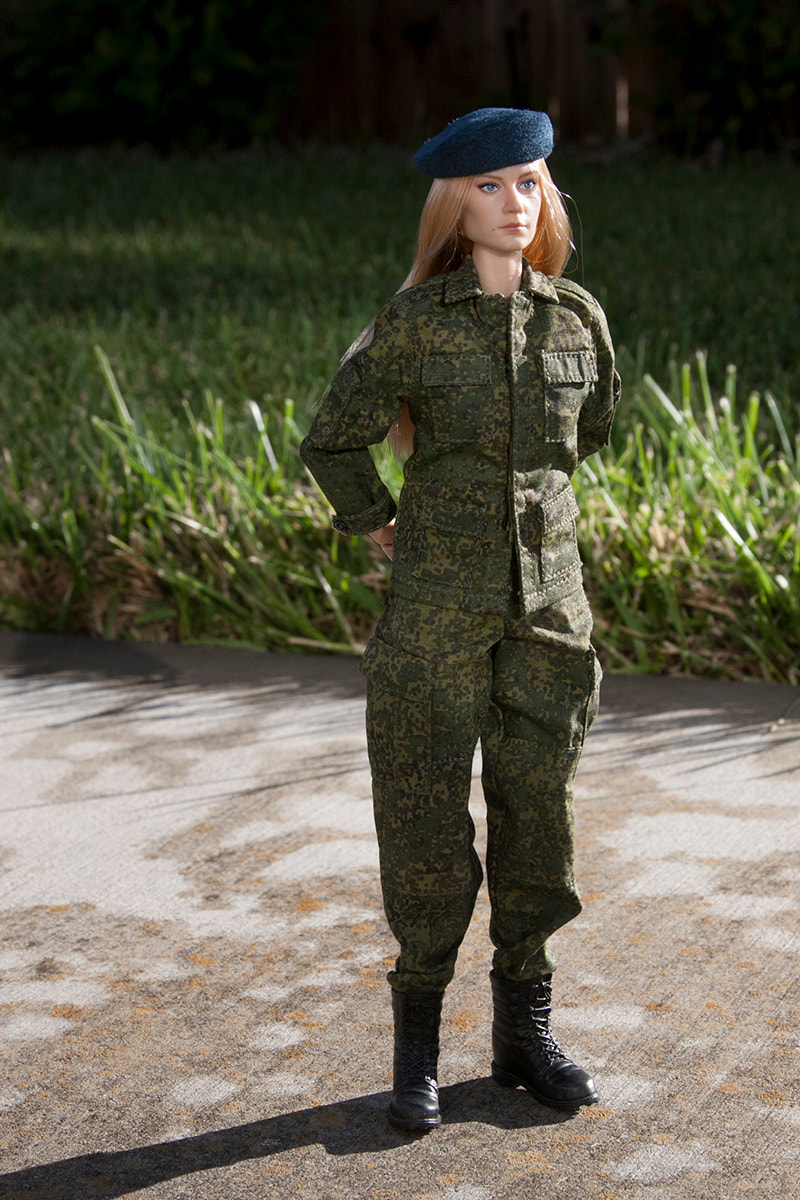 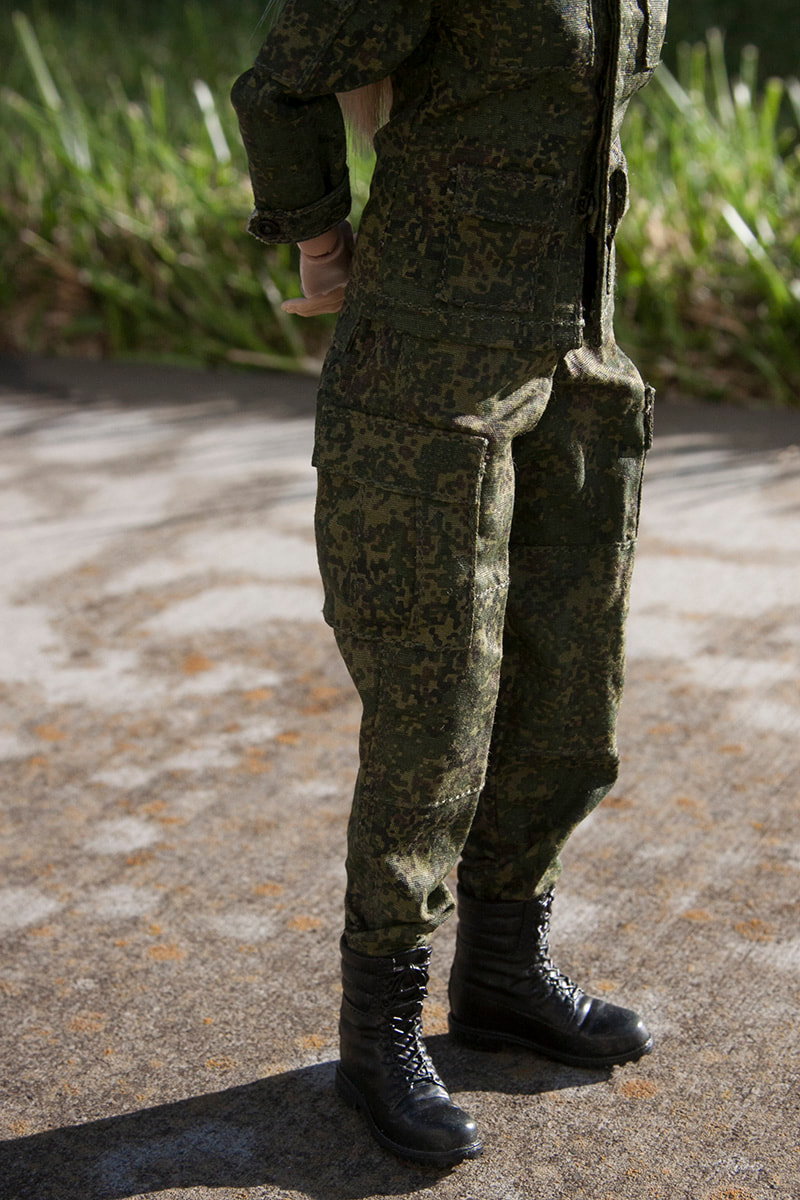 The trousers fit very nicely, and provide a lot of room for the figure to pose, as one would expect for a combat garment. The ends of the legs have elastic with helps to keep them in the boots and to look tidy. As with the VC Flecktarn, this DAM Toys uniform is a quality item with crisp details. I like the angled flaps for the pockets. I'm guessing this uniform style might be from the 2000s. 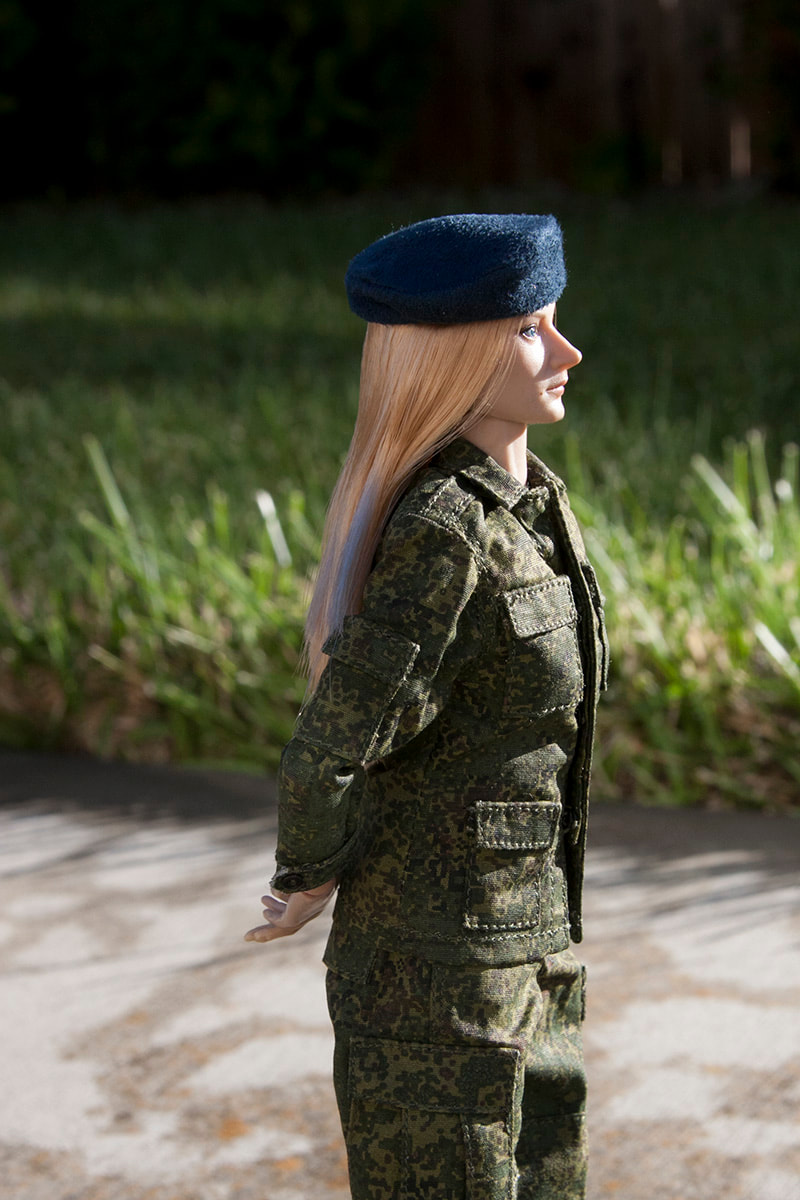 One of the strange things I found with the product photos from DAM Toys is they showed the BDU top tucked into the pants. Given that their figure is supposed to be a paratrooper, that might have something to do with it. For general use, the blouse wouldn't be tucked in. 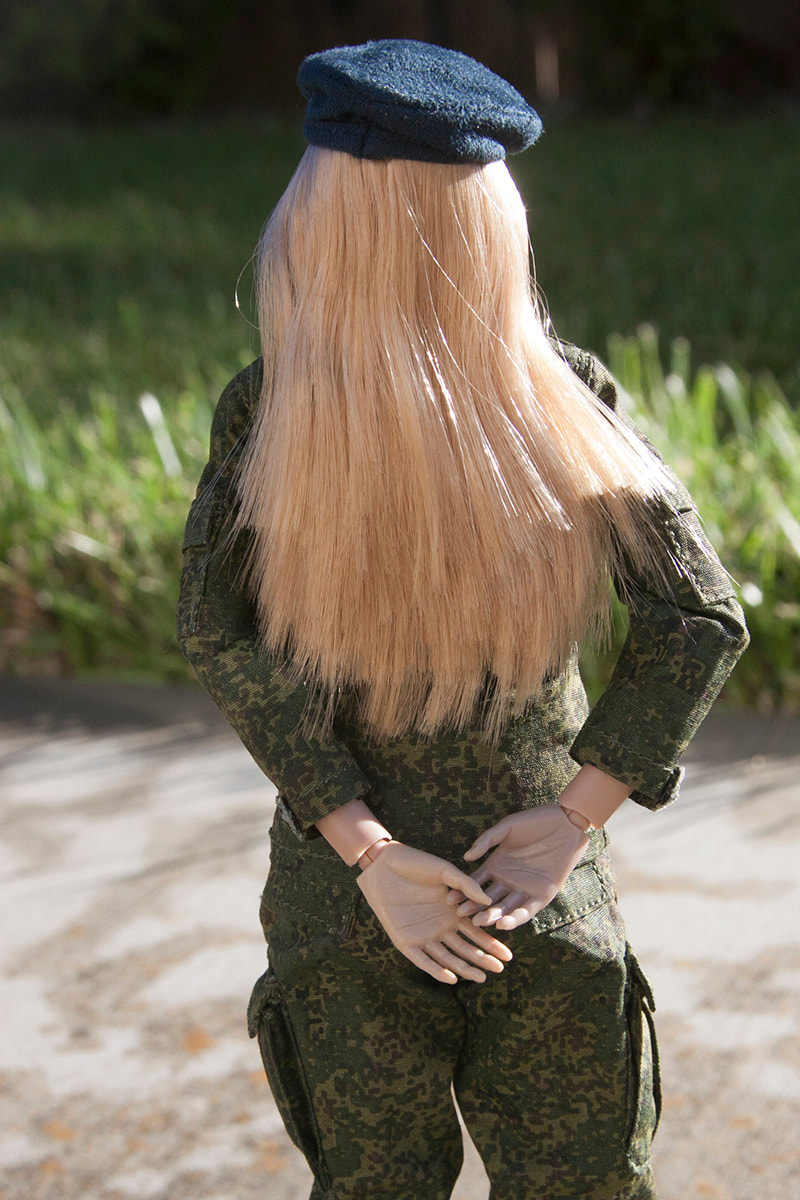 A very common error I find with clothing of all types from so many companies, is sleeves that are too short. This uniform falls into this category, as you can see here. Even if there were a difference in the length of the arms, the difference wouldn't be this great.  Not much can be done about this. 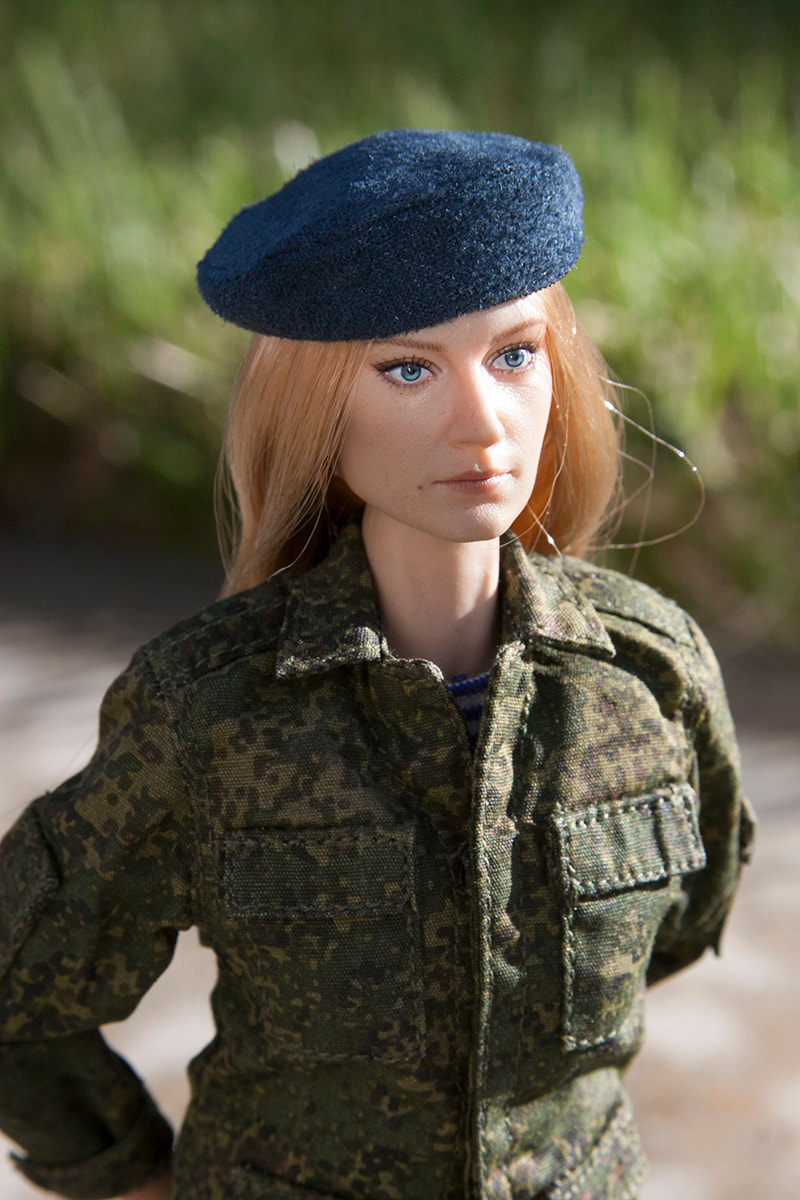 This is pretty much Irene's Flora set up so far. I would like to equip her with body armor, a side arm and an AK variant.

Continuing to develop Irene's uniform and equipment. A bit of a set back is that the Alert Line blue beret stained her forehead! She had been wearing it for about a week. It's not too bad, but it's definitely visible. In it's place she gets this tried and true black one that came in an old Dolls Figure set. Now I'm trying to decide whether to leave it black, which is useful for a wider range of characters or if I should try and apply blue flocking. I'm leaning towards leaving it black- after all, she's not actually a Russian paratrooper. 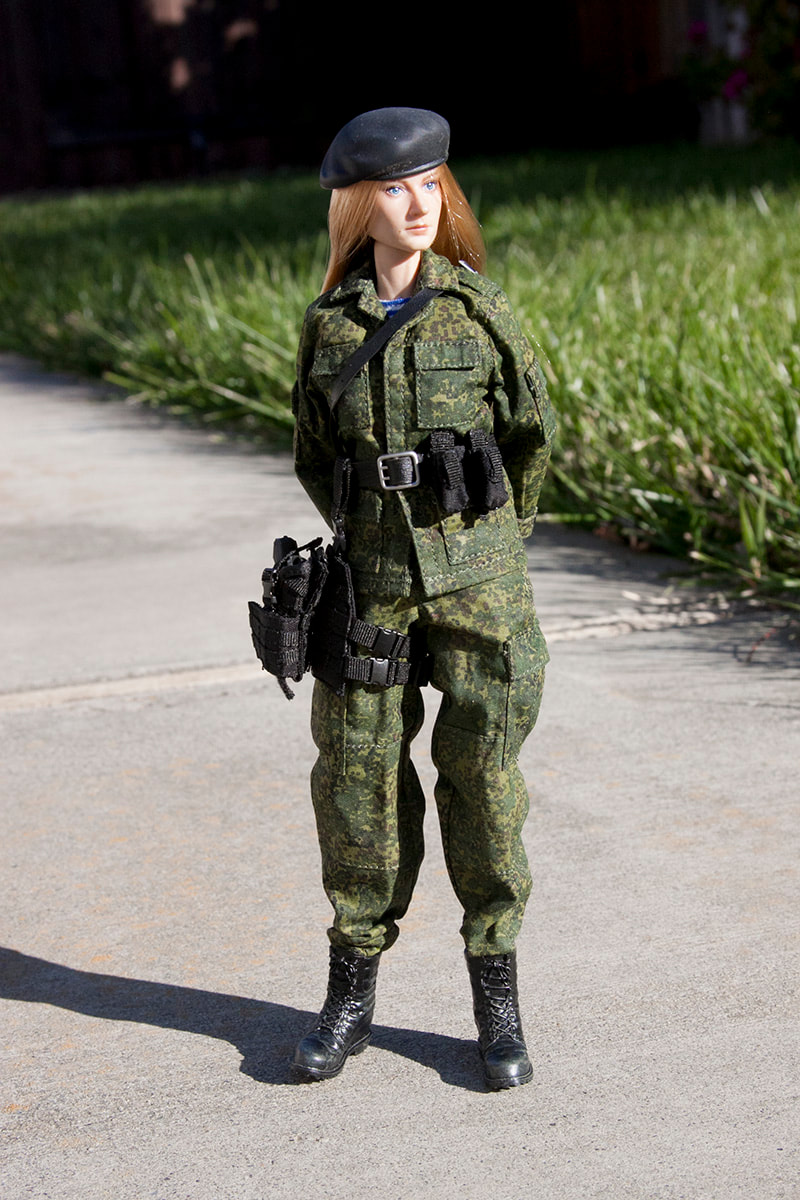 As you can see, she has received some equipment. The belt and strap are from the same DAM Toys female Russian paratrooper set as the flora uniform and boots. Her sidearm, holster, drop down panel and pouches are from a DAM Toys Russian figure set. 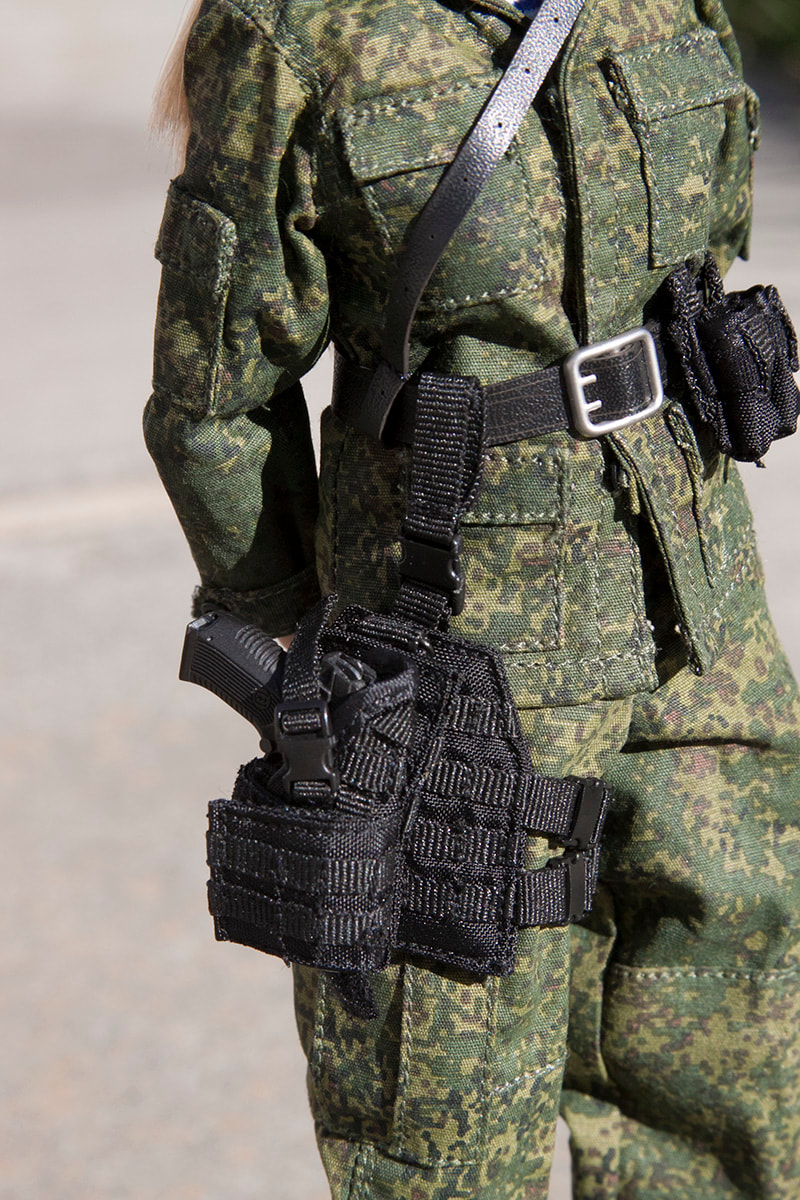 It might not be apparent in these photos, but at first the holster looked a bit bulky to me. DAM Toys is known for accuracy so I'm sure it's made to look like the full scale item, but there's a lot of material and velcro  folded under and around on this item. In fact, the holster needs to be unwrapped in order to put the automatic back into it. 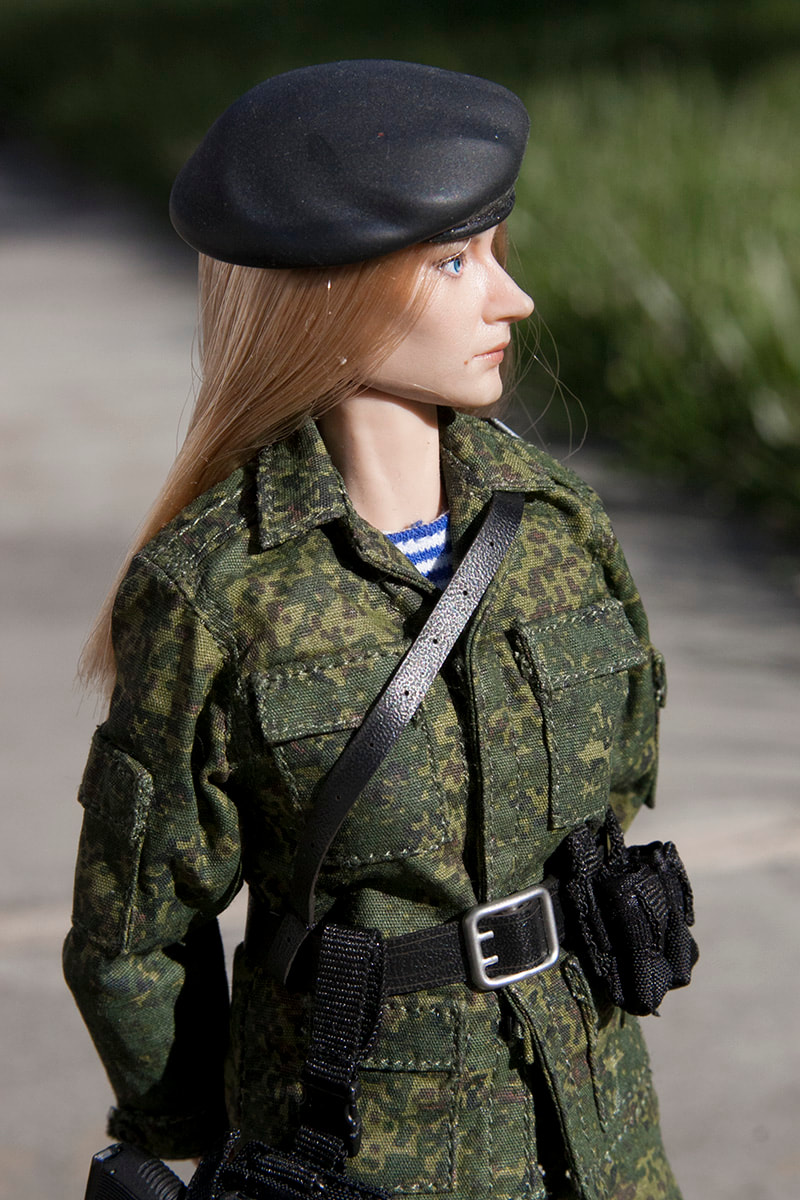 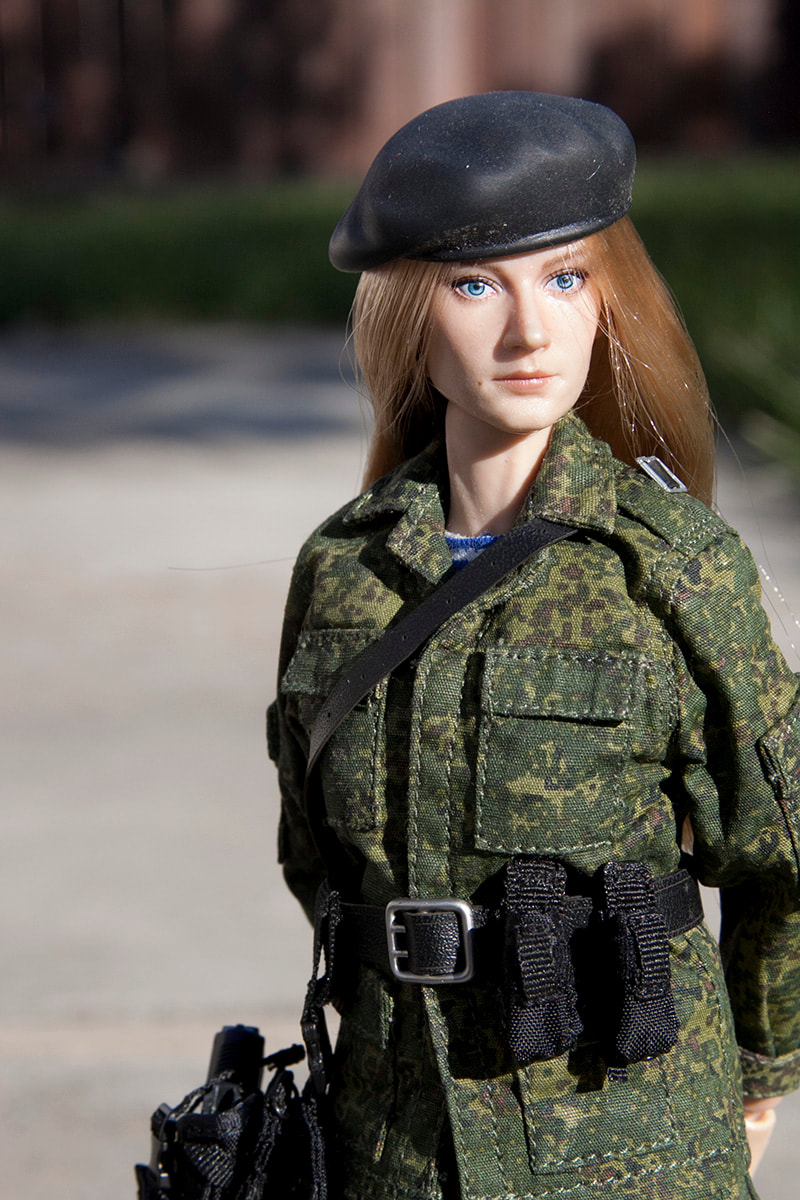 Along with the ammo clips, the next item she needs is a radio. I could use the one she had in the earlier scene, which looks like the type police officers often use or I could get her one with an earpiece. Decisions... Once the radio is sorted, about the only thing I might consider adding is some sort of pouch.