I tried one of the first Fire Girl sets, and was quite happy with it. It's well made and serves as a base for setting up a figure.  For my purposes, the main limitation is that it's tailored to fit a slender body such as Very Cool or perhaps DAM Toys. Aside from the hat, nothing in the set would fit (or look good) on a TBL or Alpha body, which are the ones I use for most of my characters.

This latest set actually looked baggy on the figure in the promotional photos so I decided to give it a try.

With these latest sets, Fire Girl has raised the bar from their earlier offerings. For one thing, these are far more complete. Included with these sets are boots (designed to accept the ball end of a leg, such as found on TBL bodies), and gloves. This set also included a jacket, a molle belt, three mag pouches, and two different sized "general purpose" pouches (all the pouches are designed to work with the molle loops on the plate carrier and and belt). As with the earlier sets, a hat, shirt, pants and harness (in this case the plate carrier body armor) are included.

The really good news for me is that the whole set fits the TBL S23B body as though it were made for it!

I took the model out (Kimi Toys 010A head on a TBL S23B) into the field for some quick photos. Here's an over view of what it looks like: 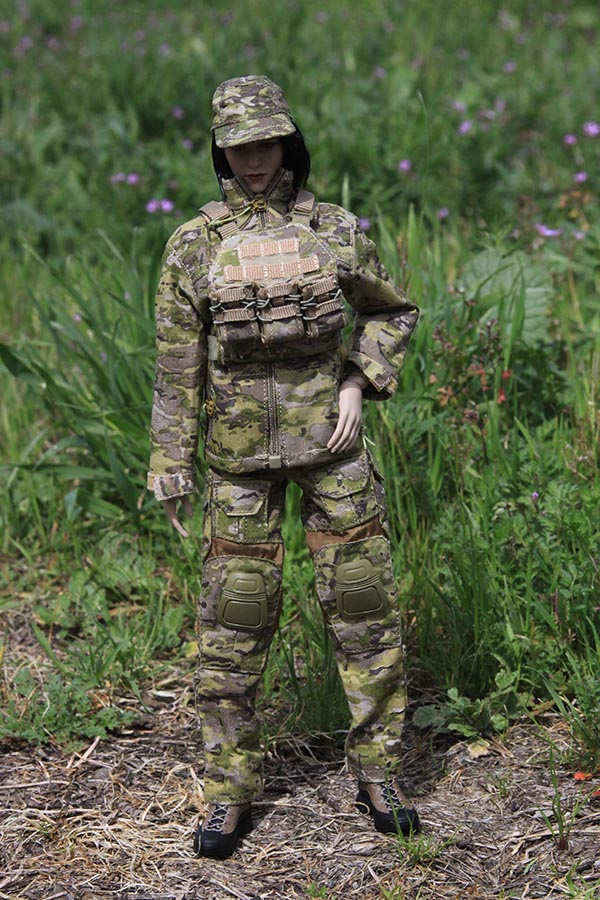 The earlier sets were nice, but the detailing and tailoring on these latest sets really set them a part. This looks a lot closer to how this type of clothing is supposed to fit. The pants are roomy enough to allow her move the way a soldier would be expected to move (crouching, running, etc.). They are also the proper length; they won't pull away from the boots as so many do. The cargo pockets on the side are functional.

While the first sets did include boots, they really weren't of the proper design (they looked like the type law enforcement used in the '80s). These look like what current soldiers and operators use, and they're much more detailed. They fit on my S23B without any modifications. 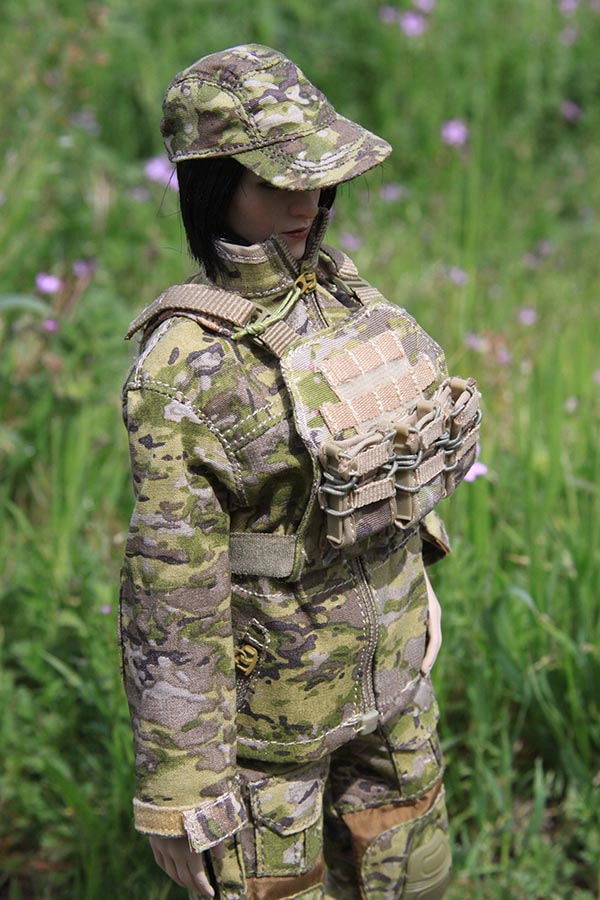 I was very pleased that Fire Girl has again made a very nice hat that fits female heads that we're likely to use. This is a major complaint I have with many clothing sets: really inconsistent quality with their caps. So far that's not the case with Fire Girl. 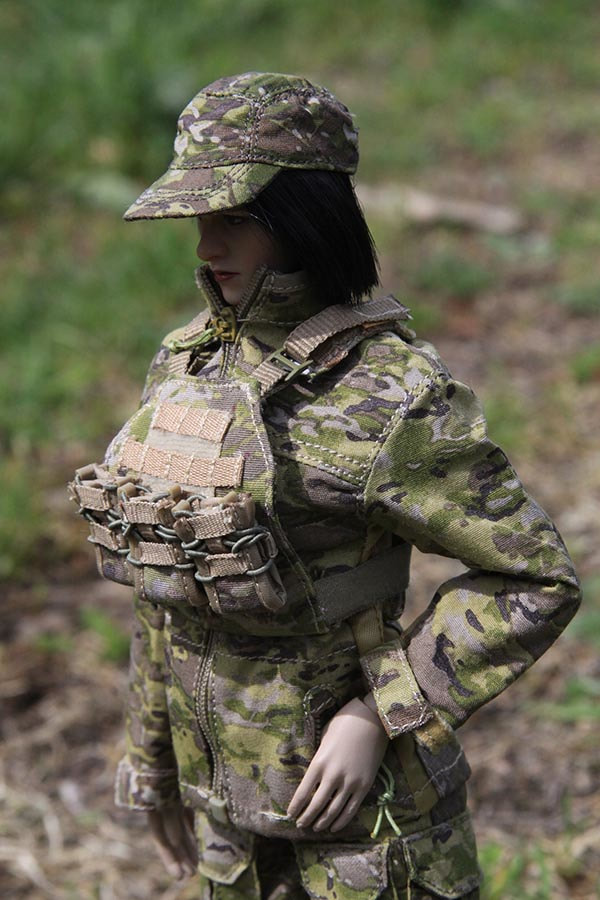 For me the real stand-out pieces in the set are the jacket and pants. All the zippers on the jacket work smoothly without any snagging or jamming. One must really see this jacket to appreciate the details and tailoring. It's the new benchmark I'll use to compare other jackets I buy (my own jackets don't look this nice!). 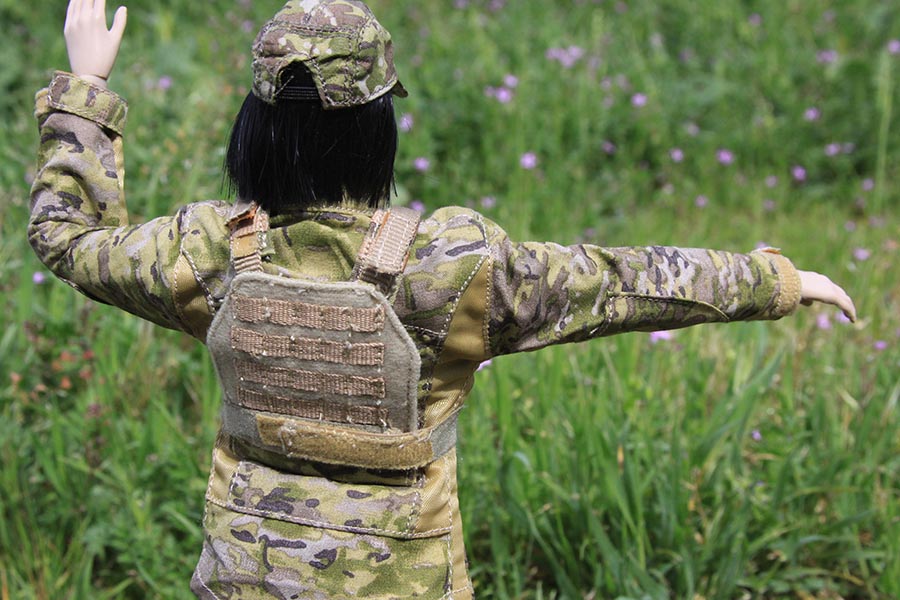 She isn't actually directing a vehicle into position- she's just trying to show how well the jacket fits and how much roomy it is. The material on the side panel is the same as the material around the kneepads on the pants- a nice touch. 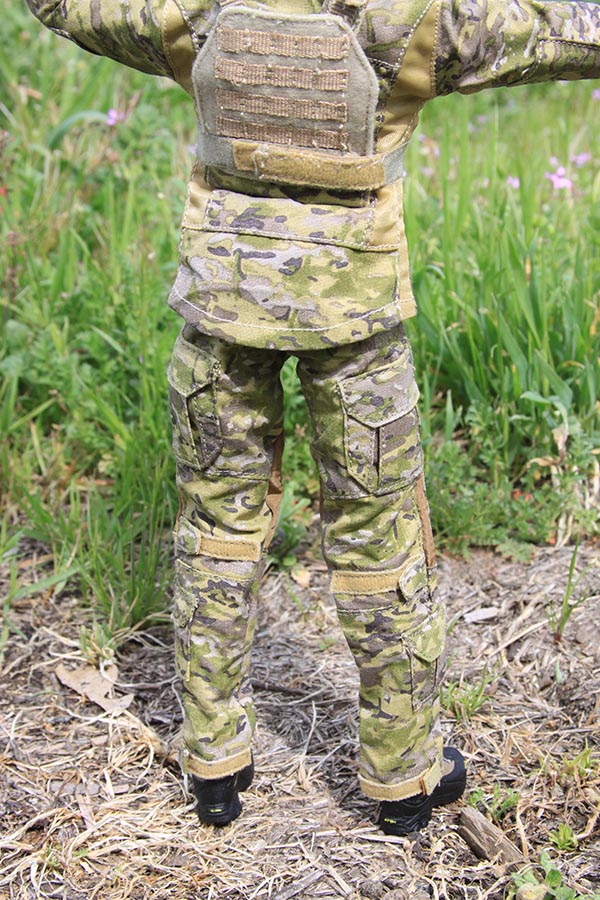 It's not apparent in this photo, but the back of the jacket is slightly longer than the front. I also wanted to show that all the Velcro straps on the pants can be adjusted to tighten the fit up a bit. This would allow use on slimmer figures. You can also just make out some of the details in the boots. 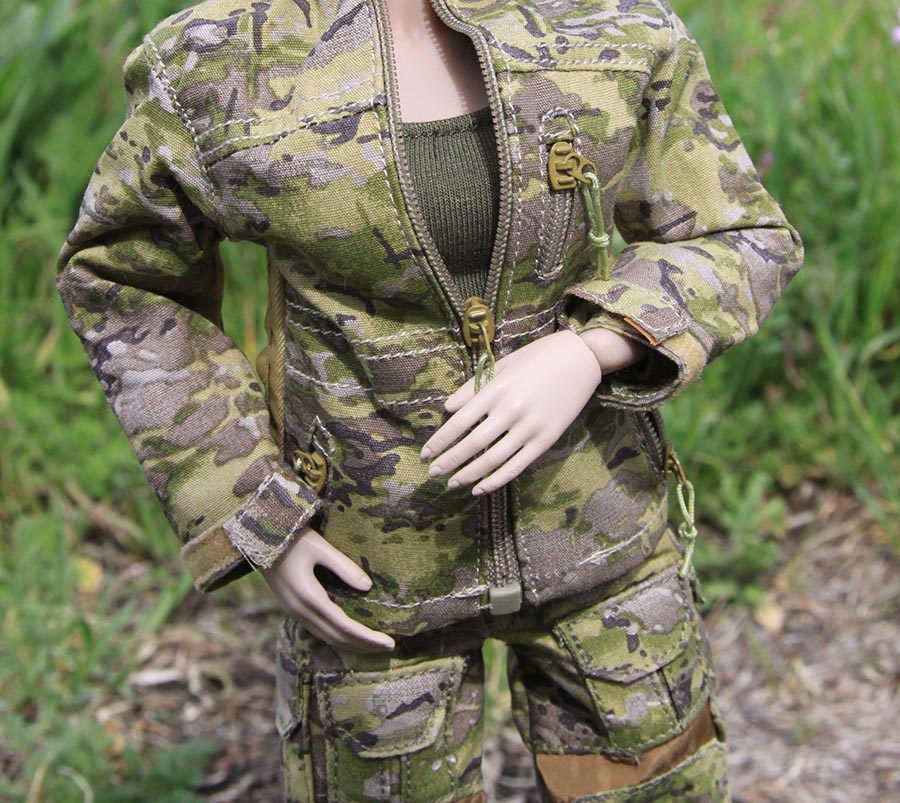 So... what's under your jacket? As she unzips, I was struck by the scale zippers we have in the hobby now. Those who are new might not realize that at one time even quality clothing sets had enormous zippers. It's hard for me to use those items now. 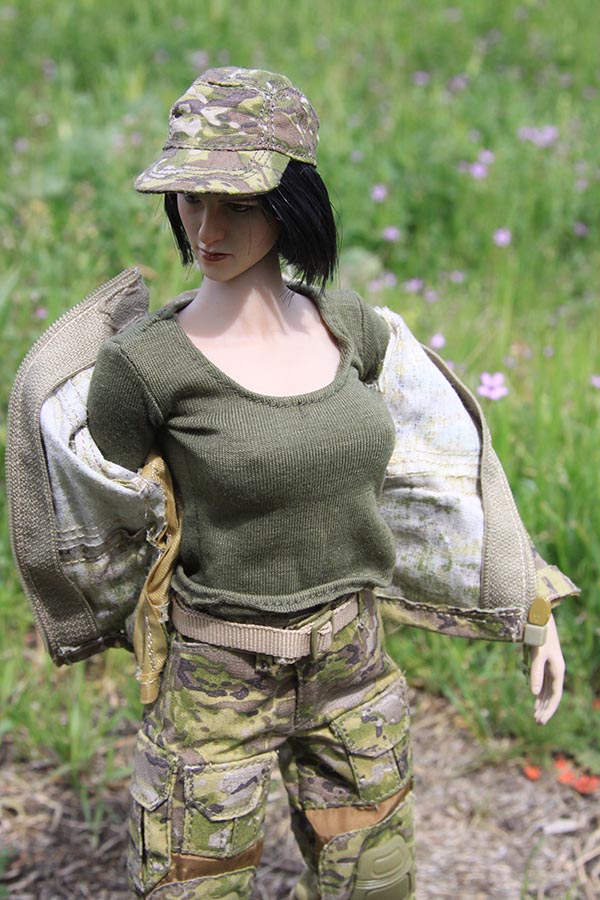 Not exactly a "standard issue" T-shirt, but still one that's functional. The earlier sets have V-necked short sleeve shirts. While they're nice, they wouldn't fit an S23B (at least I wouldn't try it). This long sleeve shirt has a squarish shape to it that allows more room across the shoulders. While in this photo it looks as though it's pulling, it really has a relaxed fit to it. I'm glad they didn't make it any shorter; I just wish it wouldn't turn up at the bottom like that. What I really wish is that I didn't miss one of the belt loops when I put the belt on those pants!

She's warning me that some people are approaching with their dogs off leash. Time to wrap up the field shoot.

At this point I have to say that I'm super pleased with this set. I did find some QC issues, though. 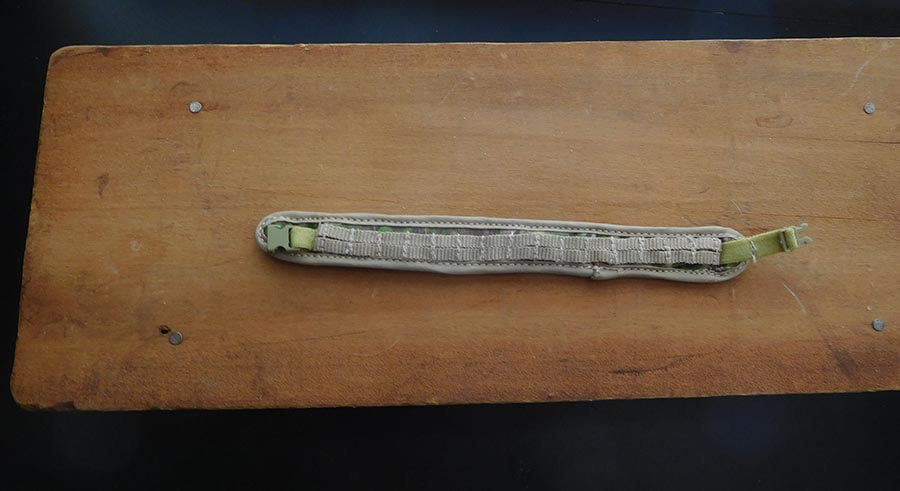 This is the molle belt that came with the set (I don't really know the technical term for this item). I was planning to hook up the other pouches to it. 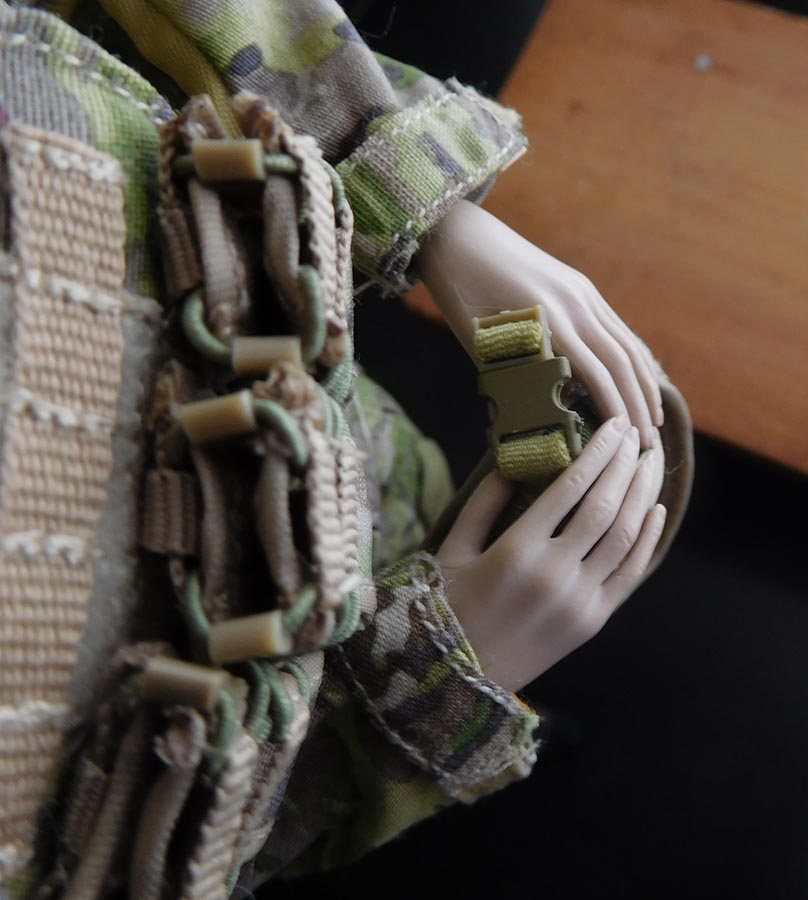 Here's the QC issue: the clips are two different sizes! If you look carefully you'll notice the clip in her left hand is at least one size smaller than the one in her right hand. These clips are available, and I'll replace the small one with one of the correct size.

The second QC issue may be a bit more subjective; some might even be okay with it. The set includes a pair of gloved "shooting" hands. The problem I have with them is that they're rock hard. They probably could actually grip something if they were heated up, but I'm very reluctant to put some of the costly weapons we have today in their grip. Experience has taught me this isn't a good idea.  A lot of the action in my stories (especially combat) takes place outdoors. Hands that need to be heated are useless to me. I really think these  should be made of a more flexible material. Anyway, here's what they look like: 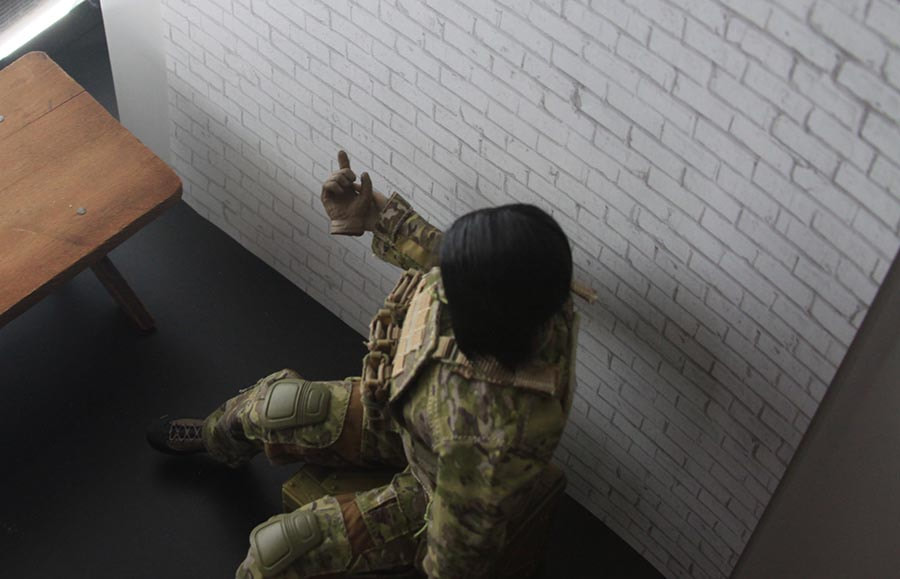 I am really pleased with this set. The clothing rivals that found on state of the art military figures in all respects, and the set is even more complete than the first Fire Girl sets I purchased. I've already found the next set I'm going to buy...
A few days later:

I've continued to work on the set-up. The mag pouches work well with these AK74 mags from the DAM Toys PMC In Syria figure. Her weapon is the AK74 from the same set (the scope is from the Easy And Simple SMU Tier 1 Part II operator). I also wanted to get some better photos of the Kimi Toys 010A head sculpt: 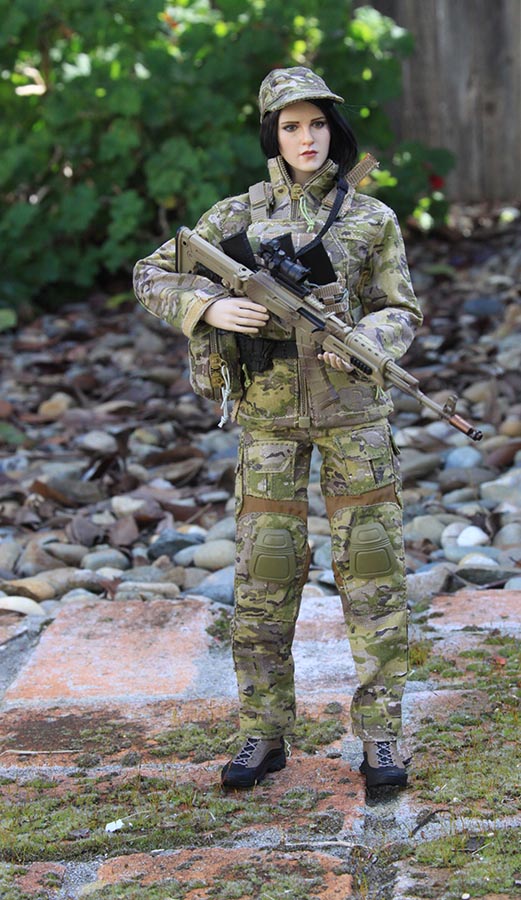 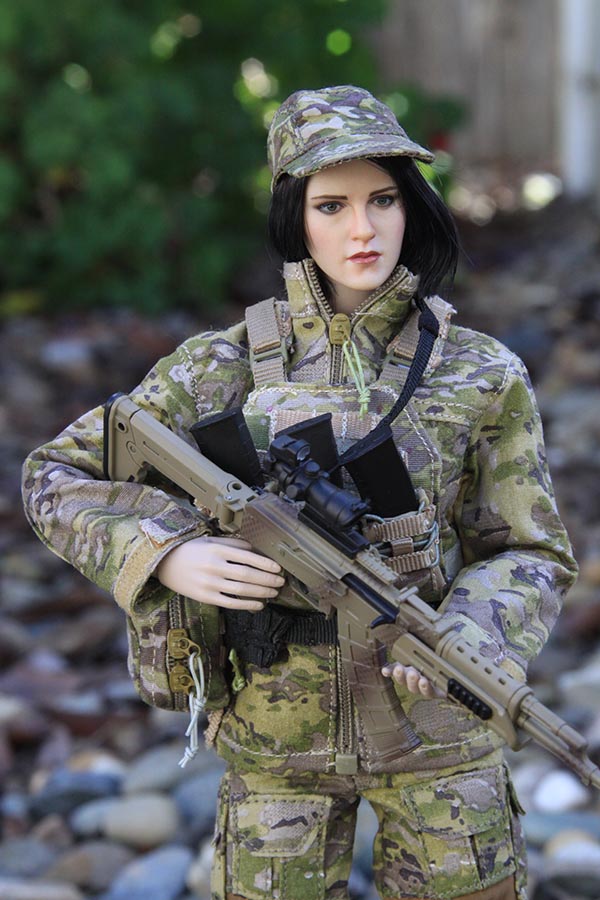 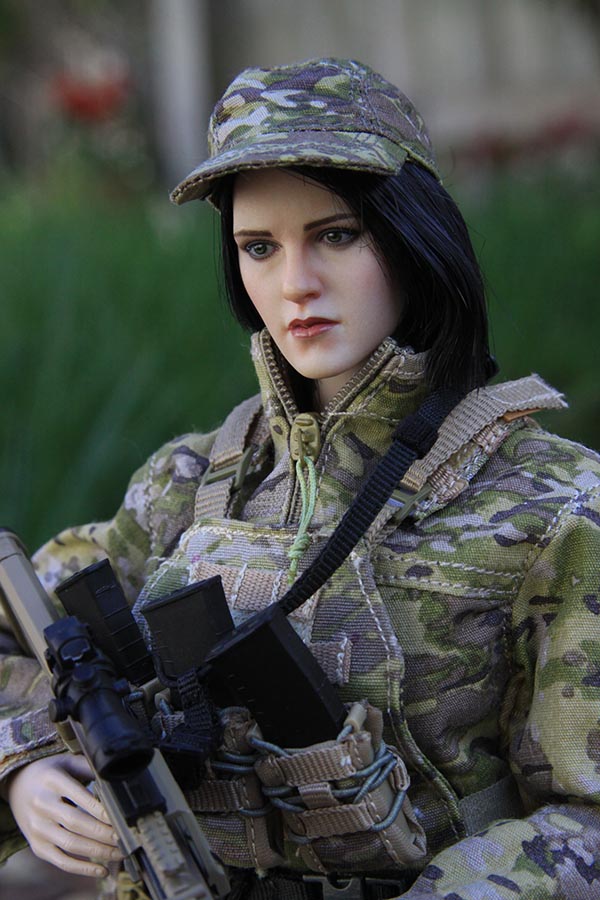 I also wanted to use the pouches so I used a molle belt from the DAM Toys Vicki/Zona female PMC figures. It's black instead of camouflage, but it'll do until I get a new clasp for the FG one: 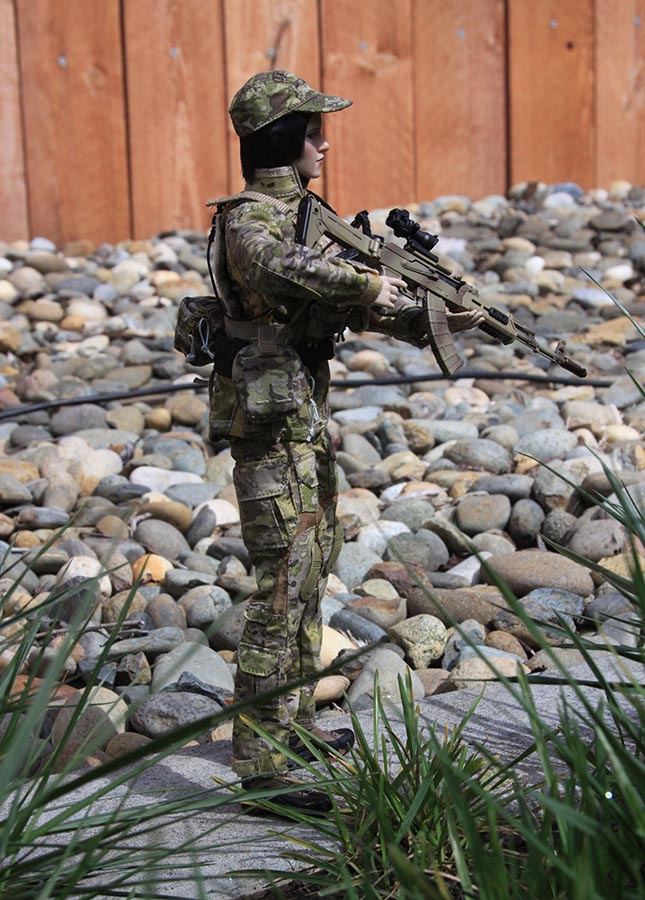 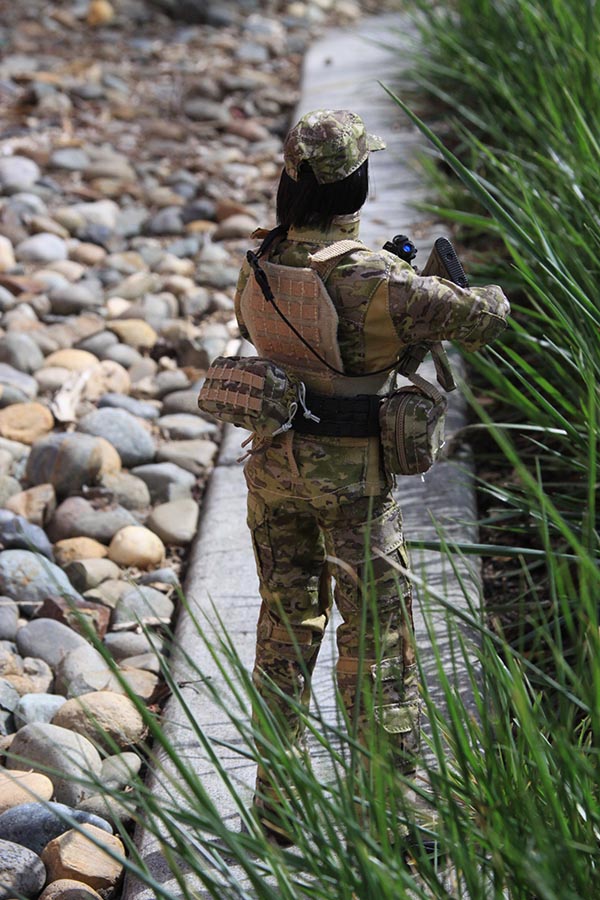