These are basic sets that provide a starting point for creating a female tactical figure.  They include fewer items than similar themed sets from Magic Cube Toys, and Very Cool Toys (which makes "full" sets that include far more equipment and a figure). The advantage to a basic set such as these sets from Fire Girl Toys (they also sell all black as well as camouflage variants) is it allows a kitbasher to start a figure without having to spend a lot of money or take the time to track down items that are being parted out from full sets.

My initial plan for this set was to use it on a Triad Toys Alpha body, my all-around first choice for female figures. As it turned out, I wasn't happy with the way the clothes fit the Alpha.  Clearly Fire Girls had used a thinner figure as the basis for this set.  I decided to pull out a new Very Cool FX01-D body. I was much more pleased with the fit.

Since this was a last minute body swap, I was more interested in a head sculpt that would simply fit the body rather than take the time for a more accurate color match. This is not the sculpt of choice for this body.

Here are the basic components of the set: 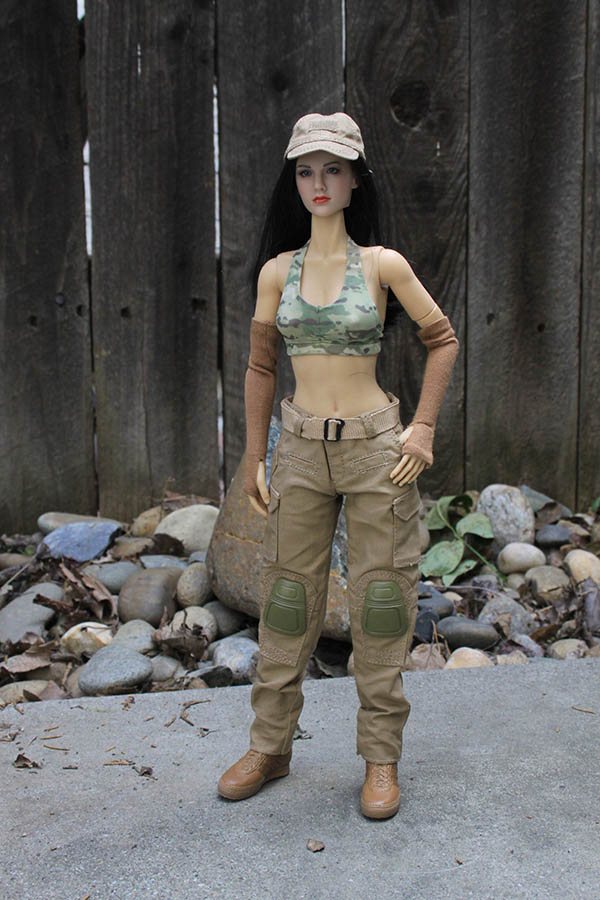 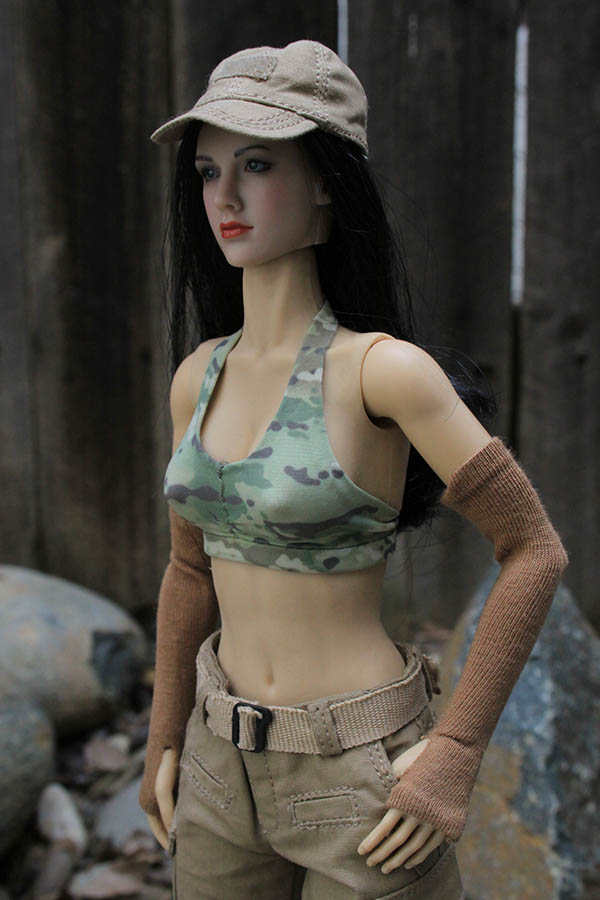 I like the lycra arm sleeves, I think they're a welcome break from the molded glove-hands. They also do a nice job of covering arm joints, if that's something that's a concern. I also like that they tend to add a little bulk to the Very Cool body's thin arms.

The camo sports bra is a nice accessory. It can stretch to fit the Apha's larger bust, but it practically becomes transparent in the process. It clearly was intended for a smaller bust figure.

The bra has a low profile Velcro closure at the back: 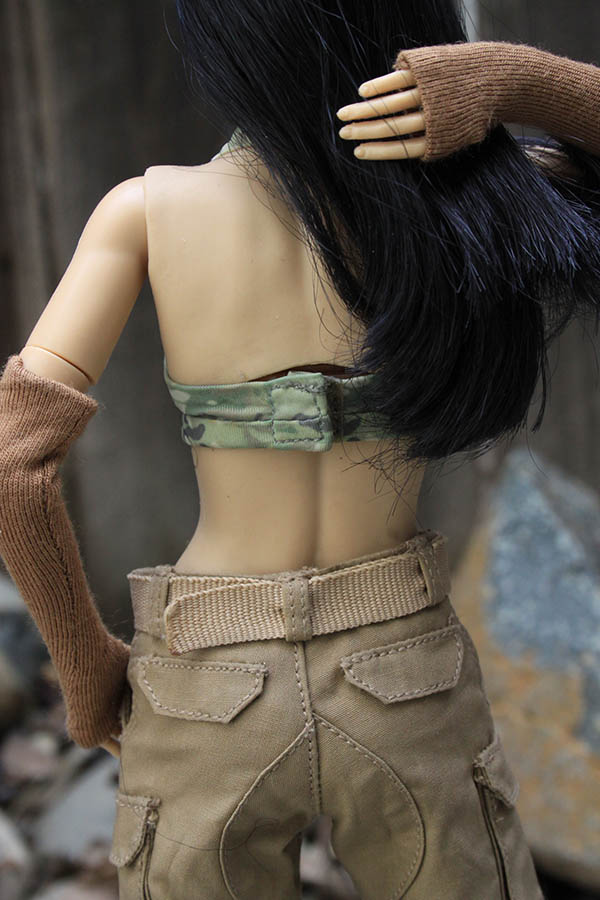 A slight digression here, but you can just make out two of my complaints with this type of body in the above photo. One is the gaps between the different segments, in this case just above the closure. The other is the rubber tends to split, often along the edges of the rubberized part. You can just make this out to the left of the closure.

Yes, the belt is a bit long, but I rather have more material that can easily be trimmed. This is better than having a belt that is too short.  I'll get around to trimming it eventually.

The BDU style pants are quite nice, and I think one of the values in the set. One of the details that's important to me, even more than functional pockets, is that the pants have enough room in the legs. Tight fitting BDUs just don't make sense to me. These look and work right with the VC figure. 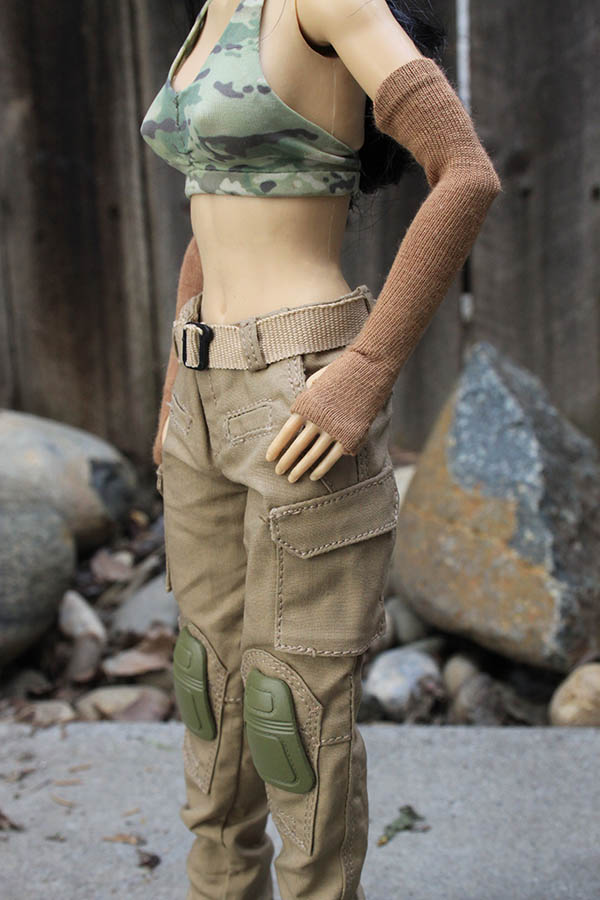 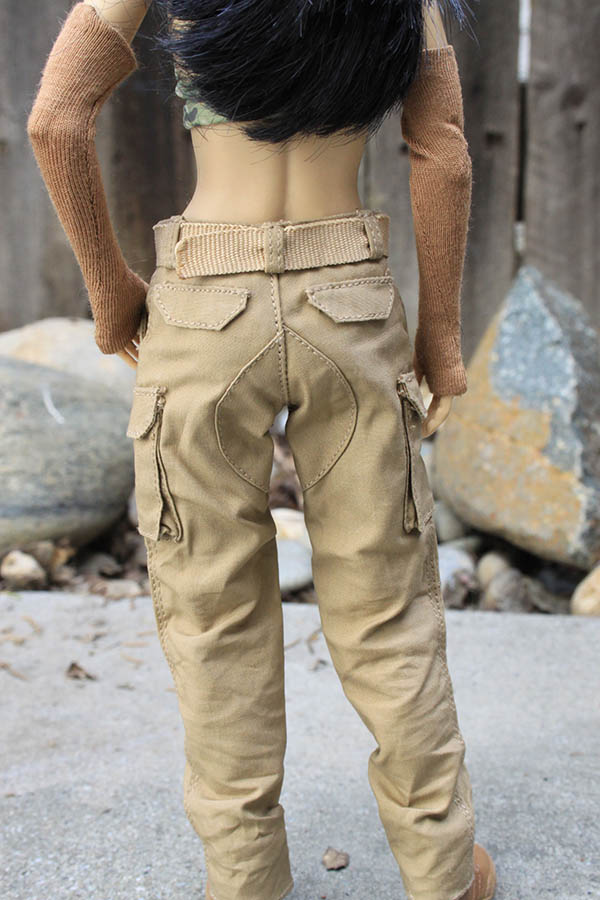 I like the angle cut to the cargo pockets, the reinforcing details and the low profile Velcro closure in front. Of equal importance to me is that the pants legs be long enough to stay at a reasonable length when the figure poses. FGT got this part right as well, though I still wish they were a tad longer. 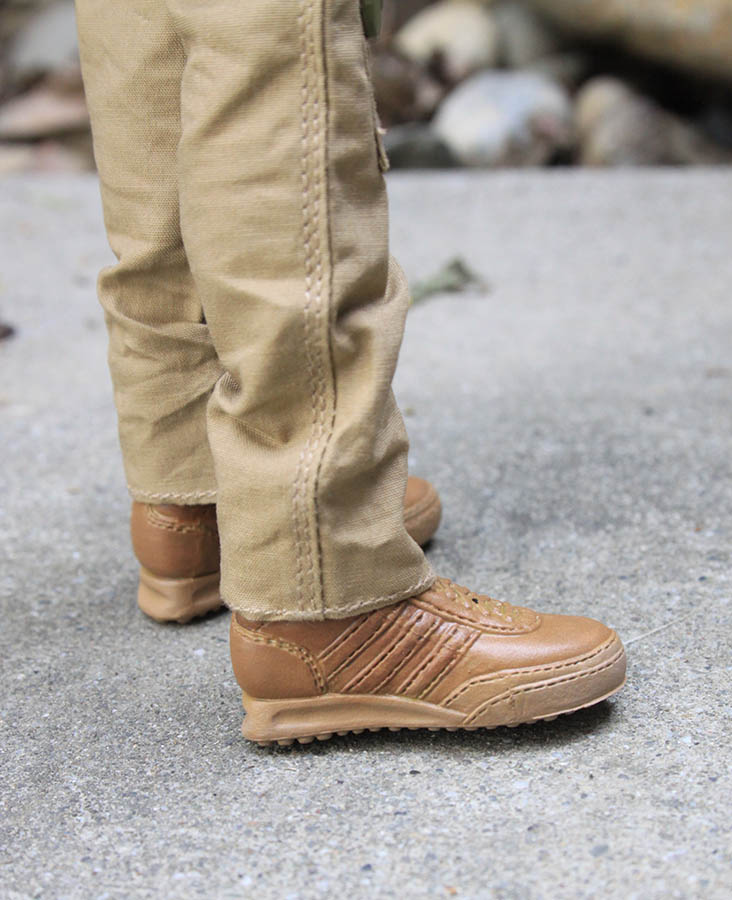 Some might say that the bootfeet are evidence of cost cutting by FGT. They certainly aren't in the same league as the Vey Cool ones. Personally, I don't mind molded boots if they're done well. I've seen plenty of clumsy looking fabric boots. I've also found that some fabric boots fall apart over time, no matter how good they looked initially. I'll admit I've never seen this style boot made in this color before. They look like the style of boot used with SWAT figures, which are usually black. These have decent detailing which could be enhanced with some judicious painting. They are made of a rigid plastic so don't expect much flexing at the ankles. This is one area where the thin VC ankle cups are an advantage as they allow for a bit of movement in the boot.  They do allow the figure to stand well (she never toppled over under the breezy conditions of the photo shoot).

I was also interested to see if the built-in kneepads would actually line up with her knees.  They work pretty well in a kneeling pose: 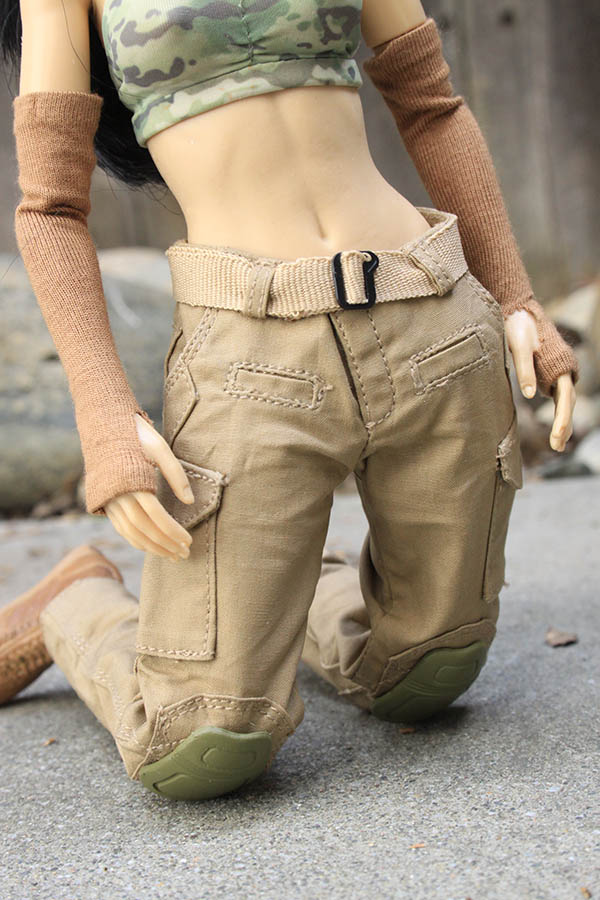 The next item in the set is the T-shirt. This is one important detail that sets these FGT sets apart from the others. Many have found the lack of a shirt to be a real short-coming of other sets. FGT addresses this with a nicely made T-shirt. It has the rugged look expected with this type of clothing.  The V neck separates it from most other T-shirts we see, and the cut adds to the realism. 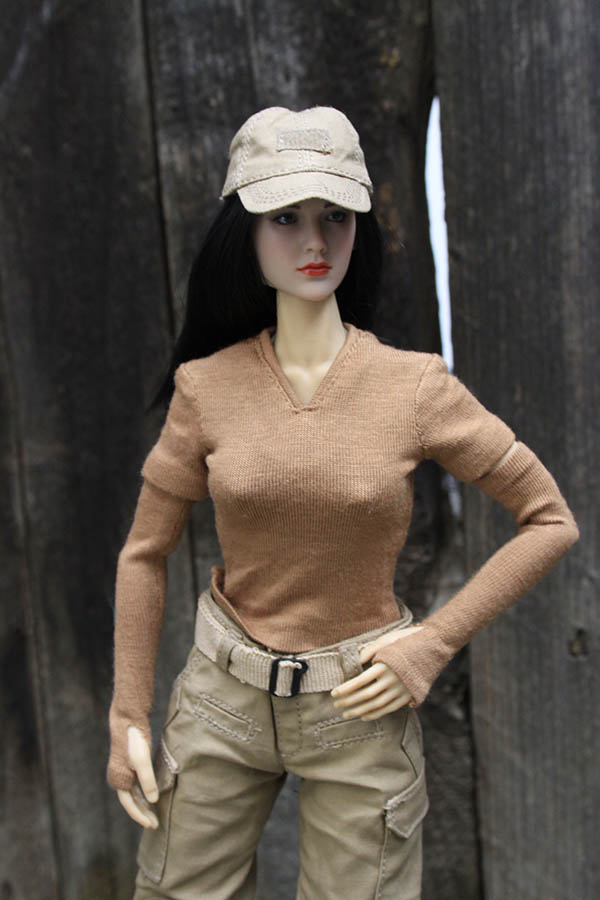 I decided to use it over the sports bra for these photos.

The next item is the harness. I couldn't tell you if it's a replica of any specific brand or style. I found the shoulder straps a little odd in that I think they should've used Velcro to secure them. The fit of the front panel looks odd to me as well. Still, I'm glad they included it. 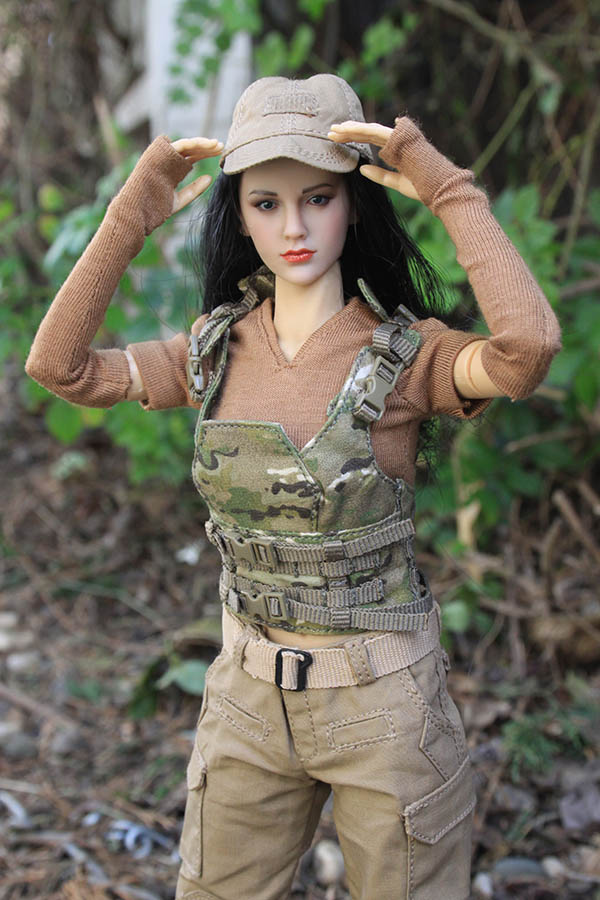 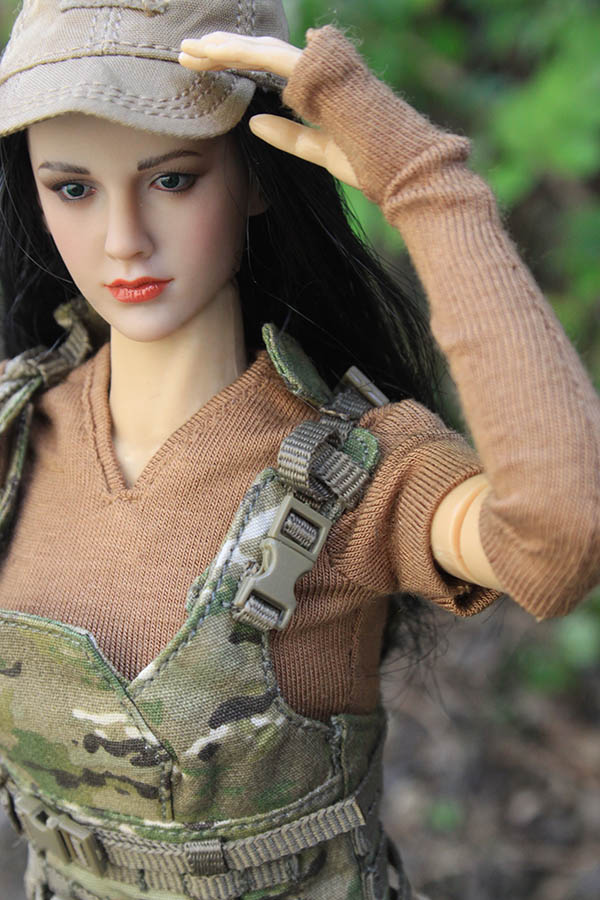 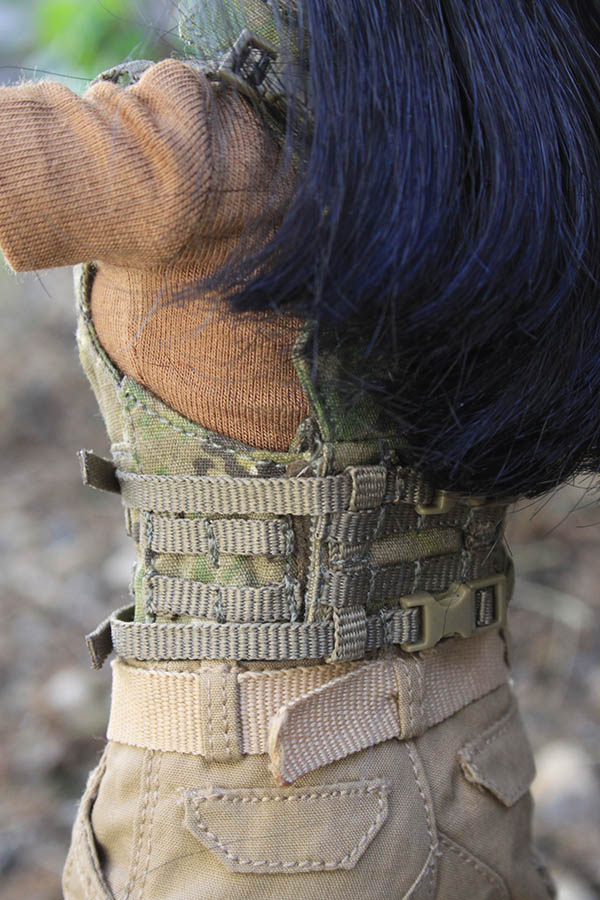 One item that I've found mixed results with from other manufacturers is the ball cap. Sounds like a pretty simple accessory, but it's one that I'm often disappointed with.  My biggest complaint is they often don't fit any figure I own! Here's an example of one I purchased recently: 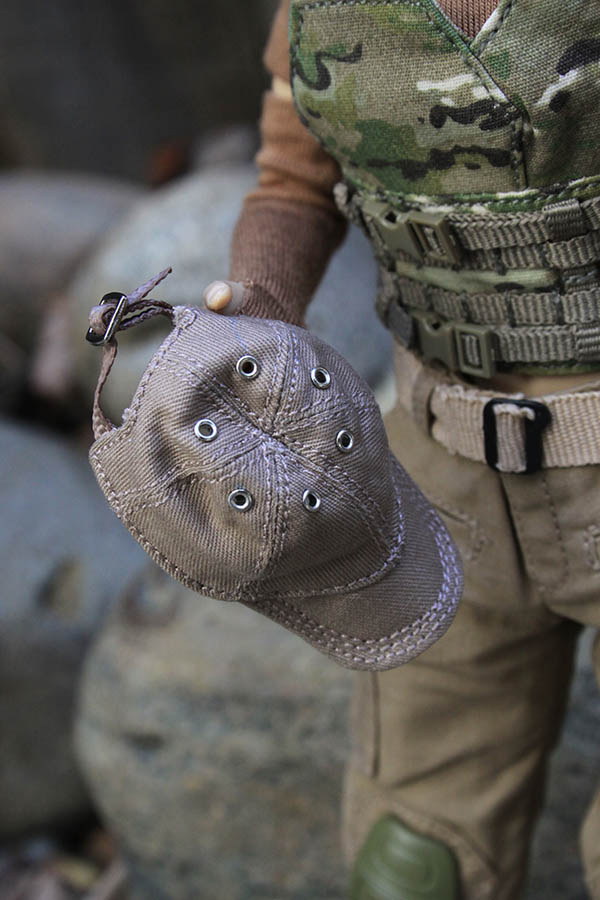 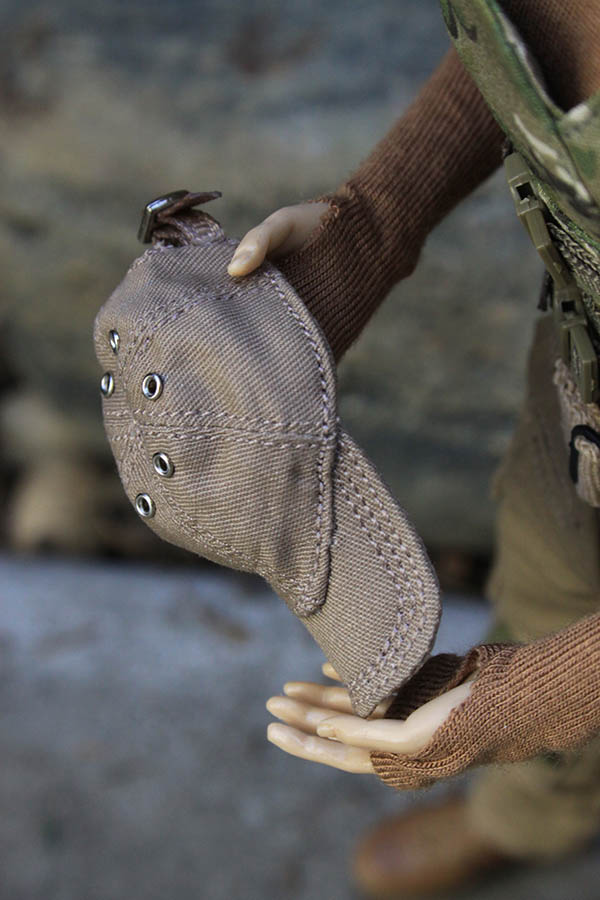 A nicely detailed cap from a well known and respected manufacturer. It doesn't fit any of my figures because of the shape and size of the cap itself: 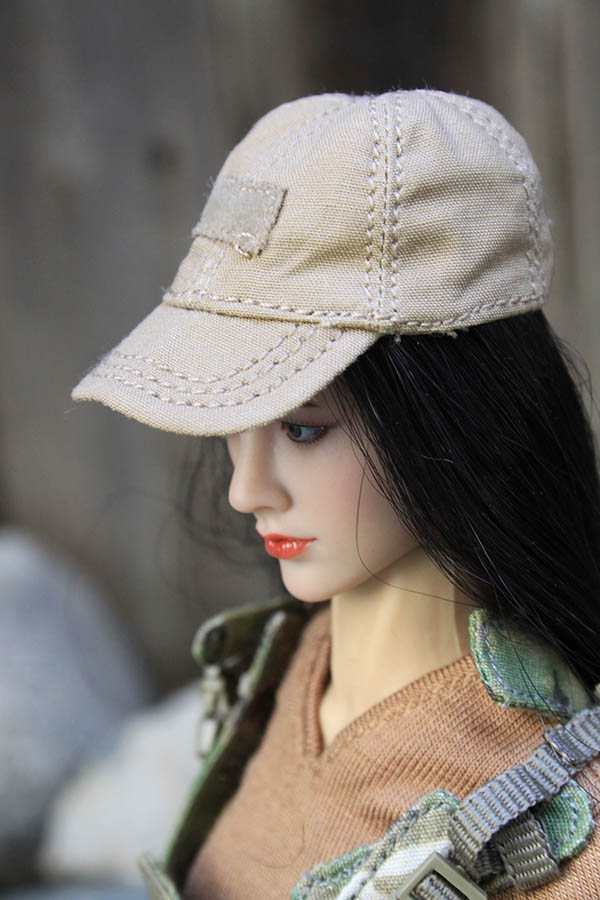 It might not be as detailed, but I am very happy that it's functional. Well done, Fire Girl Toys!

I'm very pleased with this set. I think it represents good value, and I think there's room in the hobby for simpler sets such as these that serve as starting points for a kitbash. Yes, there are some compromises to meet the price point, but I think FGT has a good combination here. I'm looking forward to buying the other sets as well. 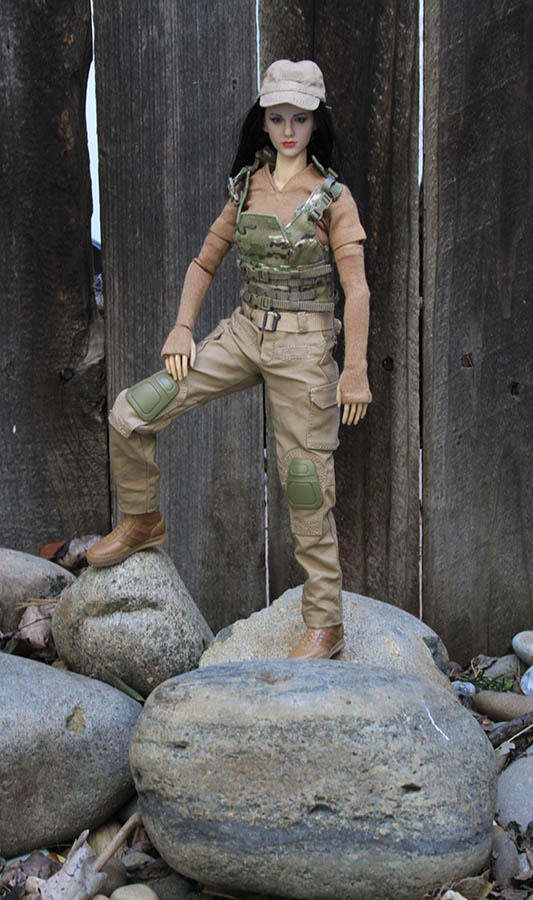