ERIKA MALAKOF- EVOLUTION OF A CHARACTER

This is actually one of my first female characters (only AJ Macnair is older- she is one of the original Cy Girls from Bbi). Erika is based on the first release of the Bbi Perfect Body. That name is quite a claim, but at the time (2001-'02) the few female action figures available had far less articulation than their male counterparts. With the Perfect Body (PB), female characters now had articulation and range of motion on par with male figures, and in many cases even exceeded them.

The PB was a durable, versatile figure. I much prefer it to the Takara/Bbi Cy Girl body, and even the later CG 2.0.  Almost all of my main female characters (the "enhanced agents") are based on this body. I've even transferred the sculpts from my CG figures to this body.

Though it has been the female figure of choice for me, newer figures have come on the market. For me, the Triad Toys Alpha became the female figure I would base new characters on. It was a completely fresh design with comparable, if not more articulation. Aesthetically, it surpassed the venerable PB. I would've immediately changed my female characters to this body, however the PB heads will not fit on the Alpha without major modifications.  New characters get this body but the older ones continued to soldier on with the PB.

Here's Erika from a photo shoot for the Saga: 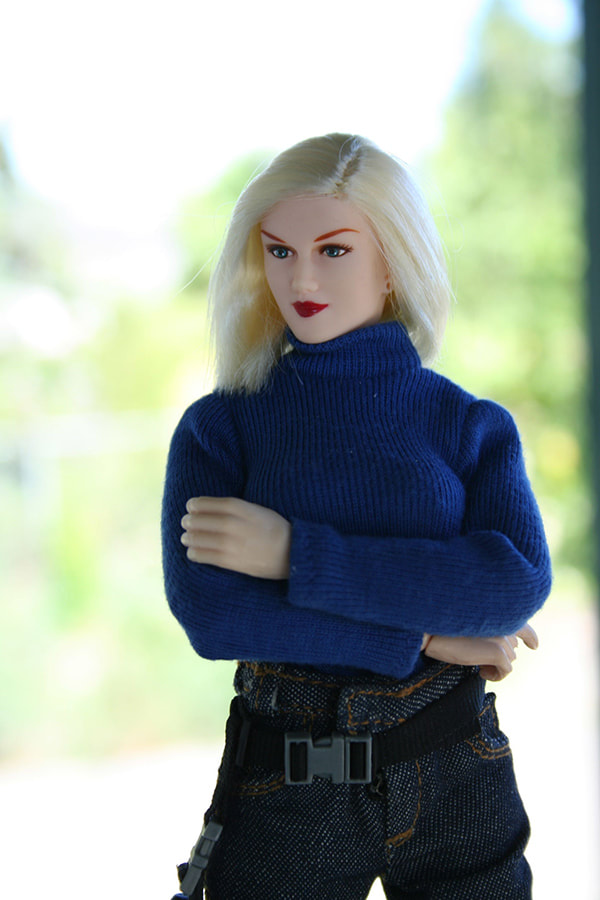 When fully dressed, I find these bodies still acceptable. It's when things become a bit more revealing that the age of the design begins to show. In more revealing scenes, I now find myself using Phtoshop to smooth things out. Here's an example that includes a simple body from Mattel (a Ken doll): 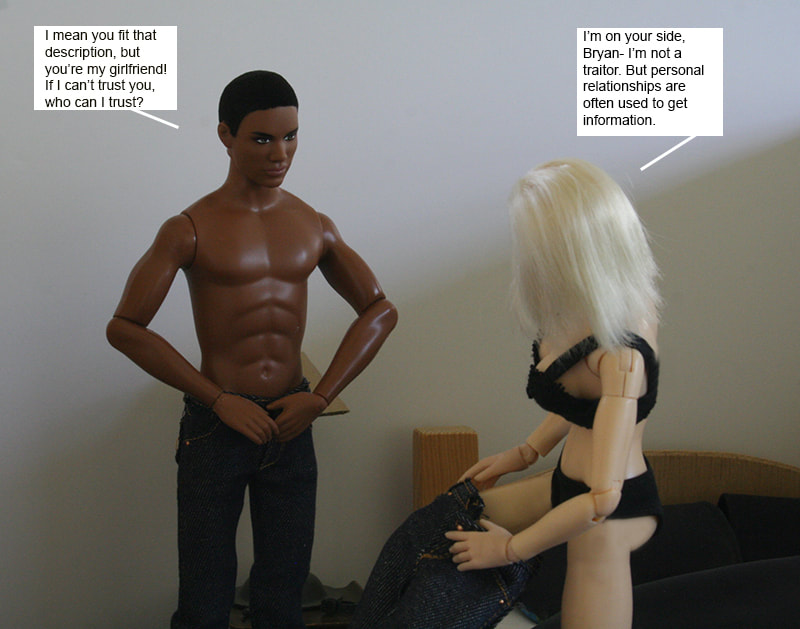 In the above photo, her waist, thighs, knees have been smoothed. The gap where her custom chest piece joins the body has been smoothed as well. This is a very time consuming process, and frankly becomes tedious. If not done properly the figure will look as though it's been badly bruised or in a car accident.

A few years ago a company called Tiger Brothers introduced a whole new concept in figure design: the "seamless" body. Essentially it employed a plastic skeleton covered by a silicon "skin".  They were beautiful but had some serious trade-offs: the plastic skeletons were fragile and easily broken, they had very limited range of motion, and the skin around the joints would often bunch up unnaturally. The silicon skin was prone to staining from just about any fabric that would contact it, and would crease or tear if the figure was left in a dynamic pose for any length of time. 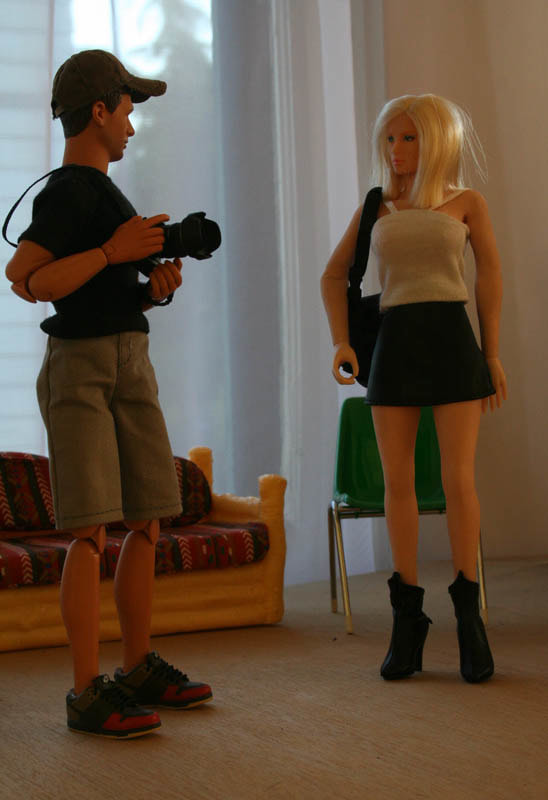 To their credit, the company (which very quickly changed its name to Phicen) kept developing the design concept. One of the updates along the way was to update the neck post to accommodate the newer design heads on the market. This change rendered my characters' PB sculpts incompatible with the new body.
Probably one of the most significant advancement in action figure design came about when Phicen introduced their  "steel" bodies.  The plastic skeleton was replaced by a stainless steel one, and the skin used a much more sophisticated silicon. Unfortunately a new trade-off was introduced: the new body could not stand without support. Its feet were tiny, rubbery appendages that were relatively useless. Even if the PB heads were able to fit this amazing figure, the most they could ever be were "body doubles" in my one-sixth world. My characters are all about action!

There are some smart people that work at the Phicen corporation. They listen to customers, and eventually they released a figure with removable feet. For some this was a step back from the "seamless" concept; for me it was acknowledging reality- most of us want our figures to not only stand, but to pose as well!

While Phicen was continuing to refine its design, a company called Coreplay introduced another female figure design. No break-throughs in materials were used, but the figure has its own look: an athletic female body with defined muscles. As my female agents are supposed to be strong, and athletic, I had to try this body. Erika was the first to do so: 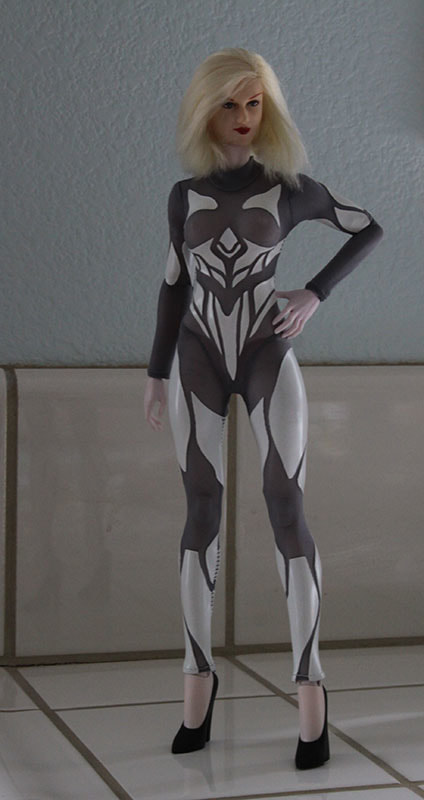 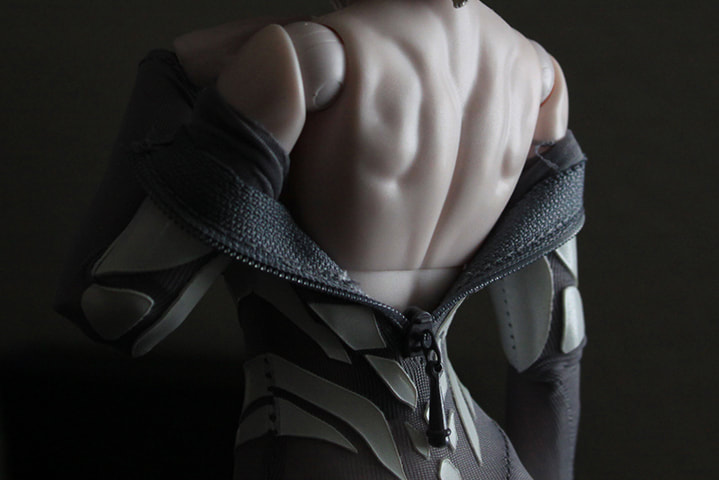 It certainly gave her the look I had been seeking for so many years! Nicely defined, without question an athletic woman, yet still able to wear her typical attire: 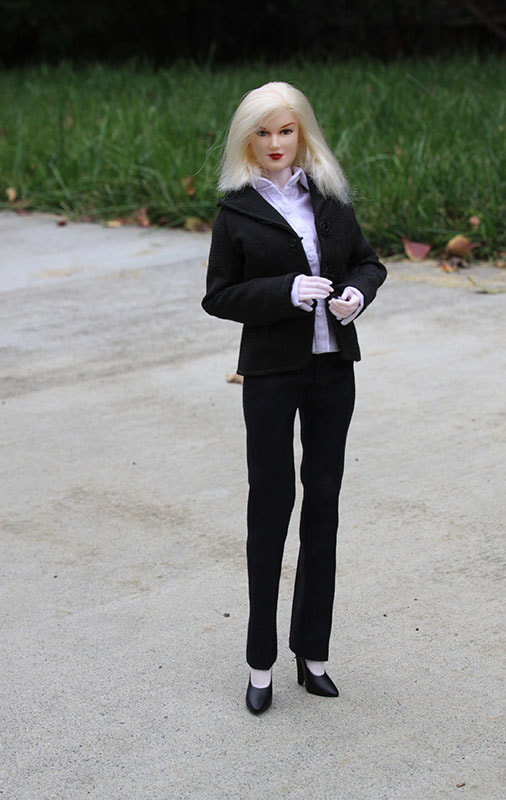 I immediately used this combination for the next scene that Erika appears in. As I worked with this body, I found a couple of limiting features. First, the upper torso has very limited range of motion, and second, those are high heel "shoe-feet" she's wearing. There are no separate arched feet available for this body. She does have a pair of bare "flat" feet. I'm sure other feet could be made to fit, but I simply don't have the time or skill for body modifications. The pale skin tone is not very popular, and there are few feet that would match, even if I were able to adapt them.  I decided this would be her new body nonetheless.
In the meantime Phicen, who know call themselves TBLeague, made a muscular body of their own. This body was designed to portray comic book (or video game) heroines. The proportions are, well, heroic. I'm okay with that; I've always been a fan of heros, especially female ones. You can see the one I purchased for my Stasha character here in the Vignettes section. As much as I would have loved to use this new body for Erika, the skin tone doesn't come close to her pale color. Then something unexpected happened...
Those ever industrious people at TBL released a series of bare bodies, and included both versions of their muscle body in the pale skin tone! I immediately ordered one of the newer "medium bust" body in pale: the S22A. Yes, that heroic build is nice, but Erika has a long established wardrobe that could never accommodate those- uh, that body.

I'm fairly confident that this will be her permanent body: 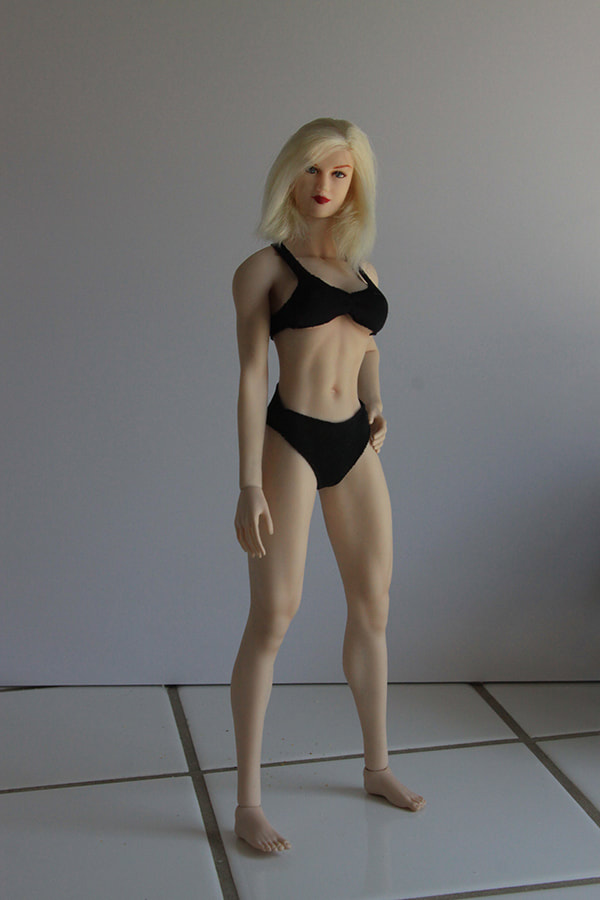 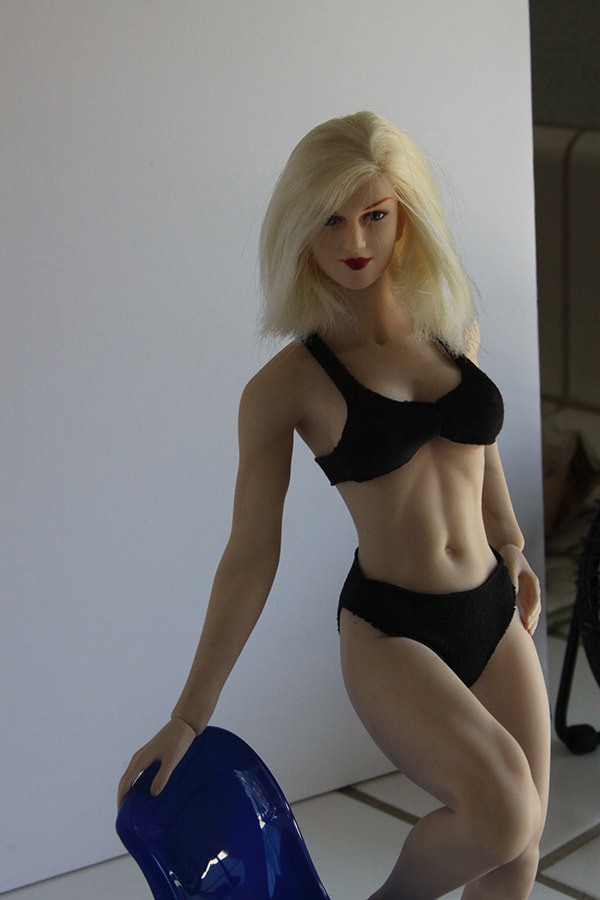 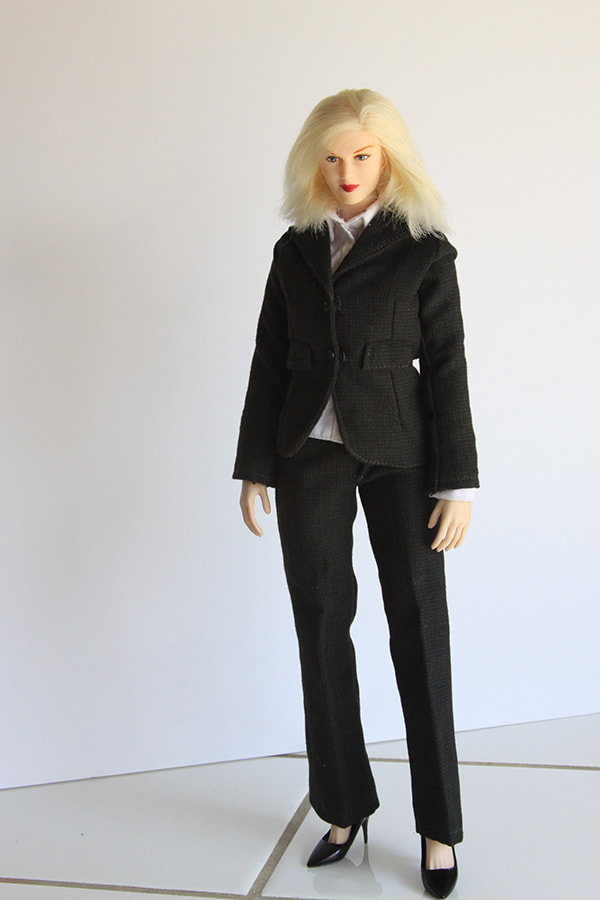 We've come a long way, this character and me. I remember how amazed I was when I started to pose that brand new Perfect Body.  Now she's finally updated to the current state of the art. Hopefully I'll get at least as many hours of play out of this new body.