Yes, she's old news, but I  missed out when DAM Toys introduced Vicki and Zona, their first two female operators. The odd thing is that I did buy just about all of the contents of the sets in parts, and more than one of each item. I have used these parts for several of my figure projects.  As is so often the case in this hobby, once the item sells out, they become extremely expensive when they can be found.  That's the situation I faced when I finally realized how much I really like the figures.

A few months ago, Blonde Action Man on MWD offered to trade his Vicki head and body for one of my spare TBL S21B bodies. Finally I have Vicki among my female operators. 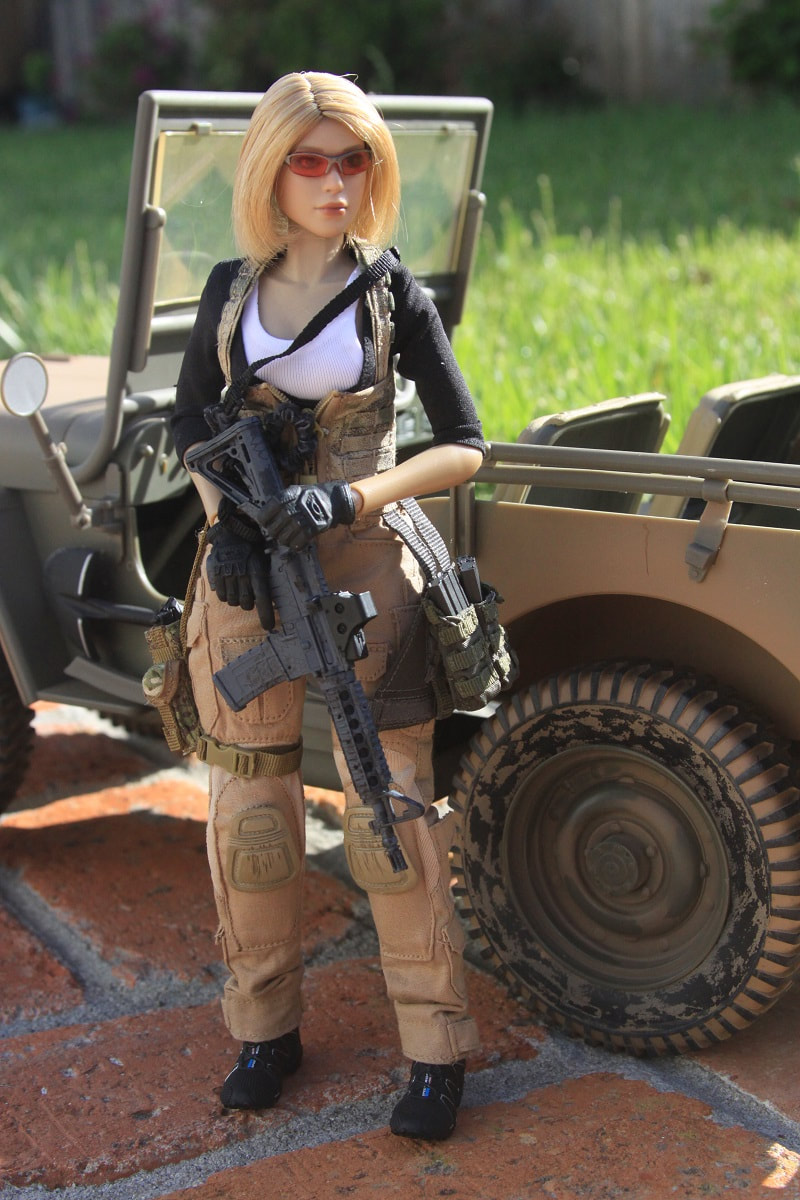 One of my goals was to use the DAM Toys body. It's similar in design to Very Cool female bodies, but the proportions are different. Vicky is shorter, and her shoulders are much narrower, though she's not skinny by any means. She'll add variety to photos with other figures; it's nice to not have everyone be the same height and build.

The only item of clothing she's wearing from the original set are her pants. I remember when I first got these pants, I was disappointed that they fit all of my figures like a tourniquet. They allowed very little if any articulation. I even tried them on a DAM body, with the same result. As cool as they are, they were consigned "back to spares".

I was very surprised to find they fit Vicky perfectly! Yes, this should be obvious, but I had already tried them on a spare female DAM Toys body. Maybe all that pulling and pushing to get them on other bodies stretched them or relaxed the fabric. I may have even squeezed the S21B I traded into them. 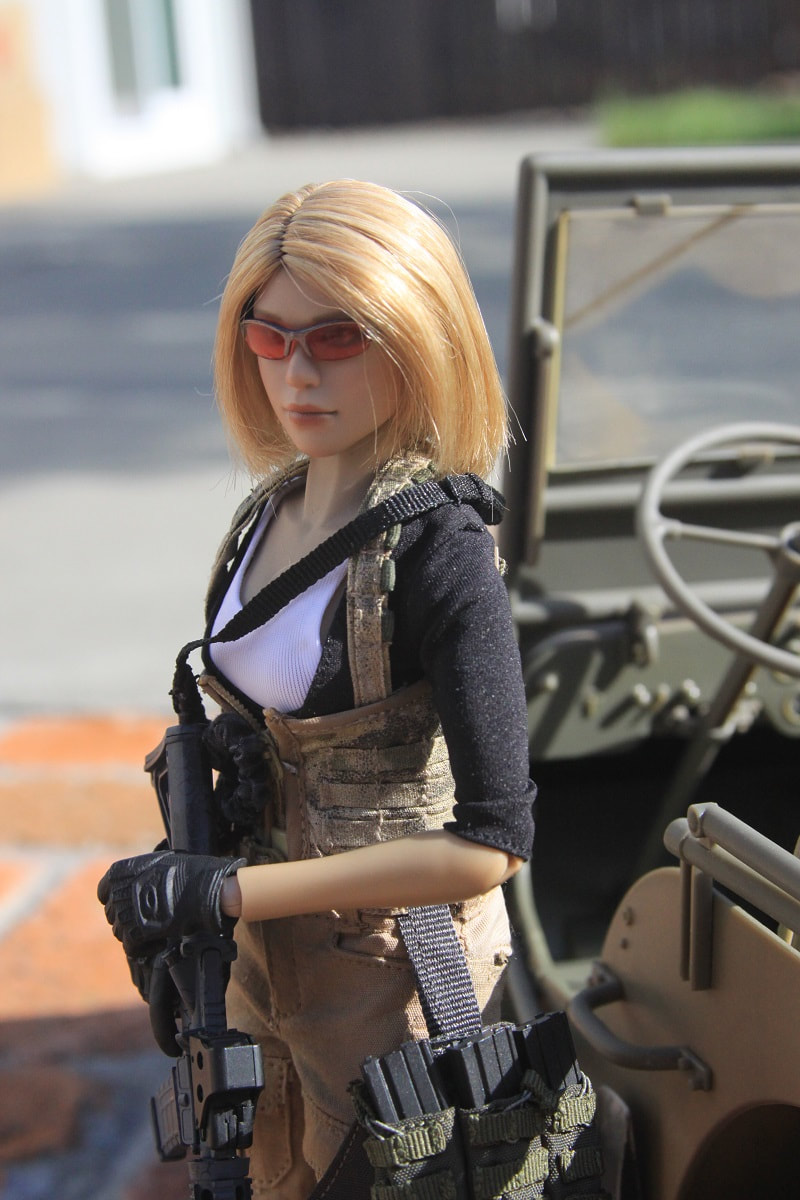 Her original shirt- a plaid short sleeve shirt tied in the front and worn over a black sports bra- still proved to not work. It squeezes her upper body to the point of distortion. It might actually fit a fashion doll.  Vicky is wearing a white sports top from eBay, and a black shirt from a Very Cool figure. Her harness is from Very Cool Jenner, her sun glasses are from a Flag Toys female figure, and her drop down mag pouches are from two different Easy and Simple male figures. 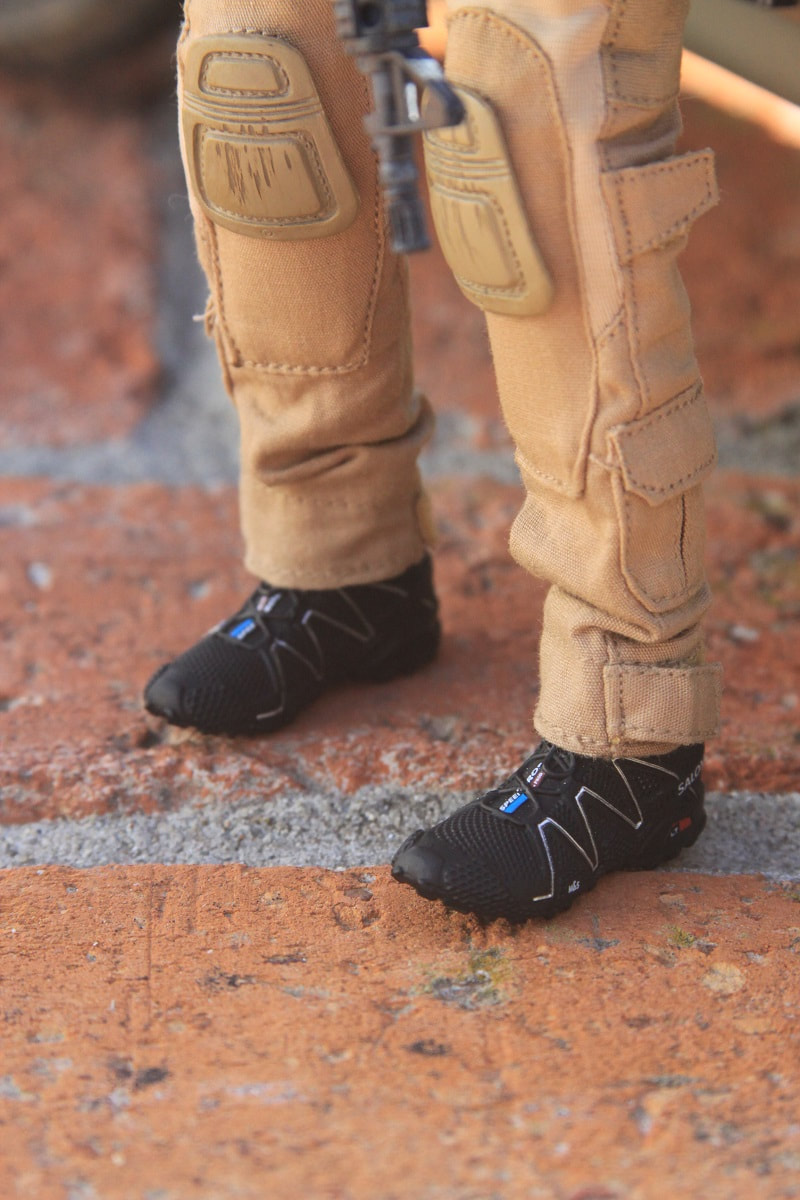 These Salomon branded shoes are from SMcG Customs. I don't know what figure they're from as I got them from the recent trade box that circulated. These shoes have amazing details! All of the tiny logos are legible and the lacing looks convincing (I have shoes with similar lacing). What you can't see here are the ankle pegs that are from a Bbi Perfect Body. I modified them to fit into the DAM Toys ankle cups and the sockets in the shoes. 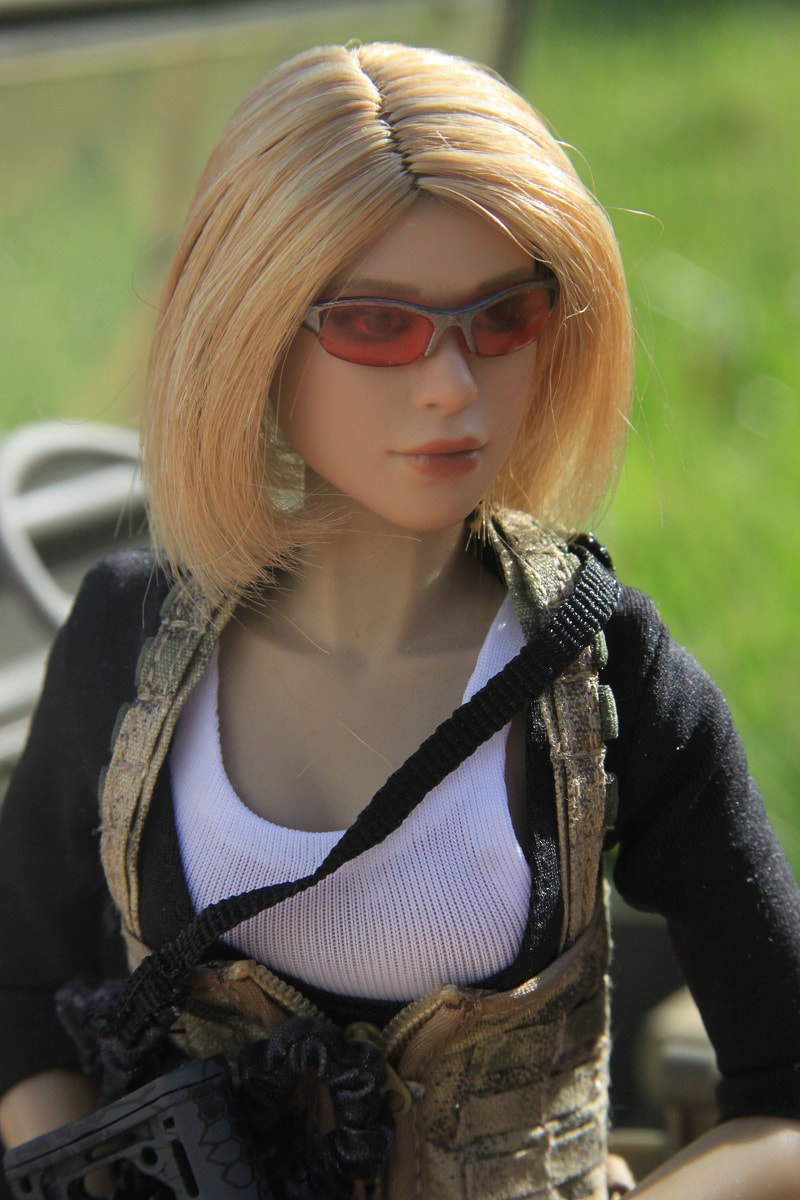 Just in case I didn't mention it, I do like this sculpt! In fact, I like it a lot, and I'm really happy to finally have her among my operators. DAM Toys deserves credit for making someone with a healthy skin tone! She's not cadaver white or "sun tan". She could probably work well on a Triad Alpha. Do not use this lighting as a definitive gauge of her skin tone- there are all sorts of color casts bouncing around in the early morning in this location. 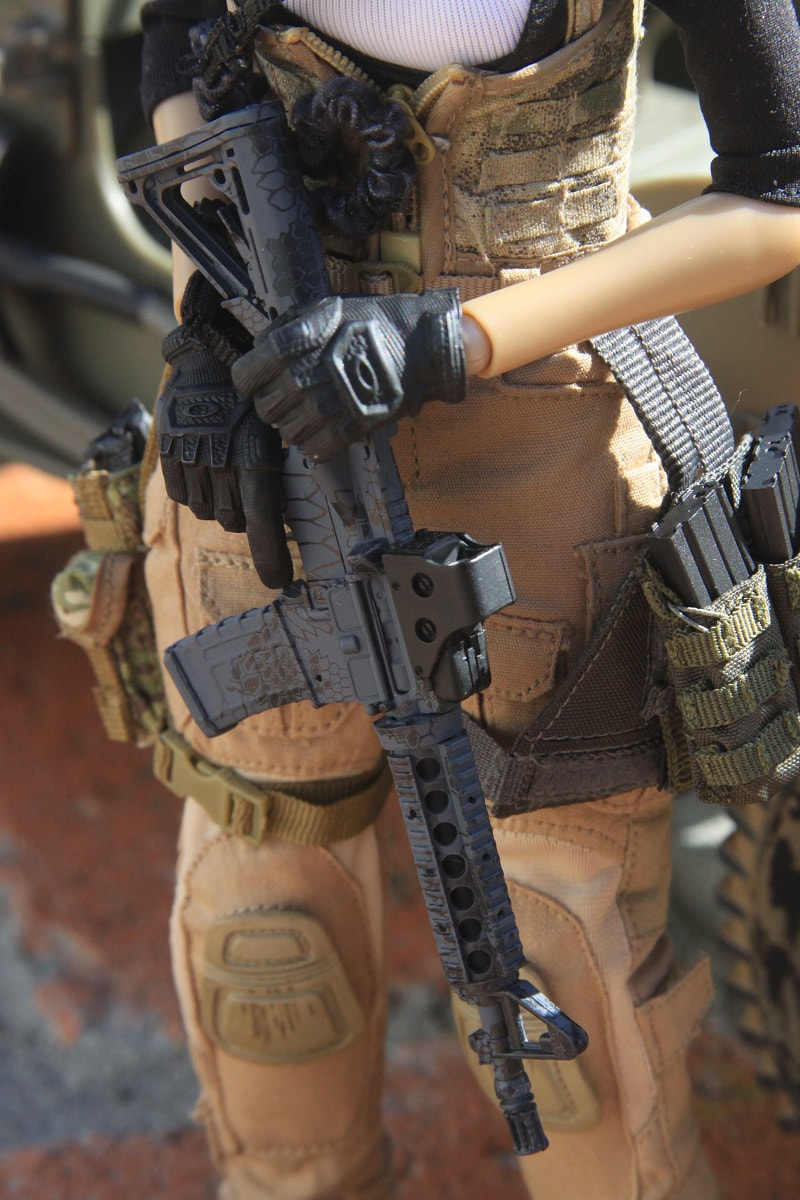 I need to adjust her harness a bit so it can zip all the way up (it has laces in the back). Her original rifle is being used by another figure that has already been photographed with it in the photo saga. I've pretty much settled on this M4 from Magic Cube.  Her gloved hands are from Fire Girl.  I'm going to swap out the mags in her pouches with ones that match the one in her rifle.

Remember when figures couldn't be posed holding a rifle like this? Modern figures make it easy. In fact, they make so many poses easy. 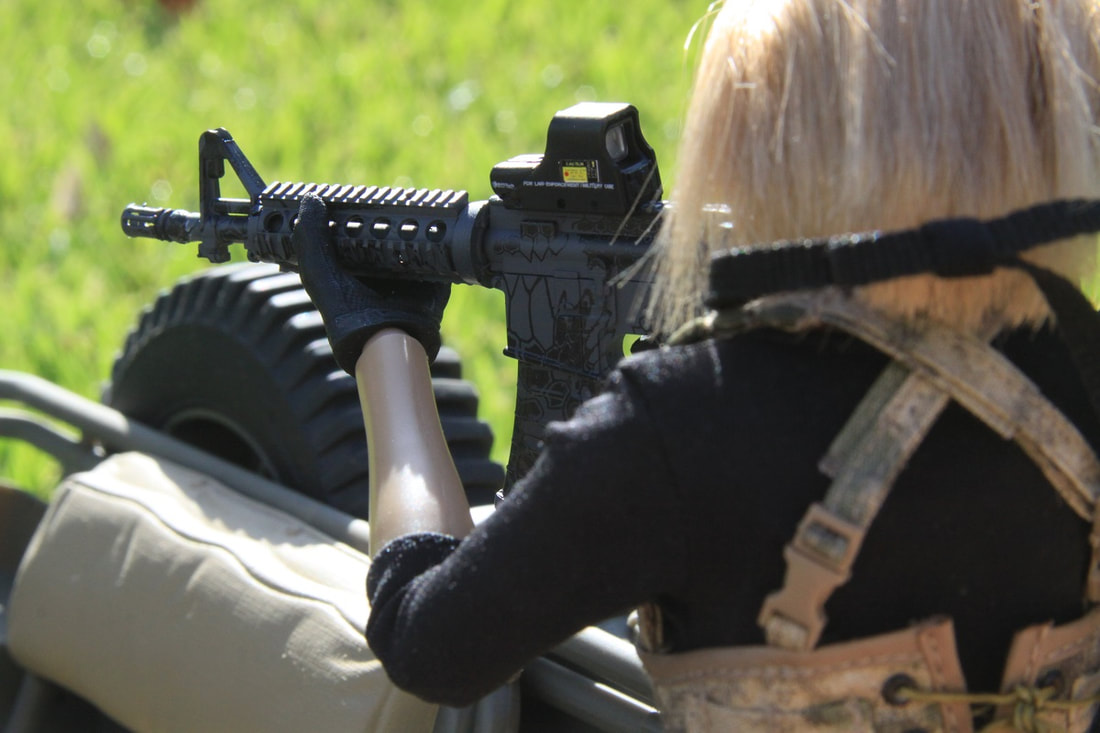 Considering how old this Magic Cube rifle is, it has some impressive details. I think it holds its own quite well alongside my weapons from E & S, and DAM Toys. 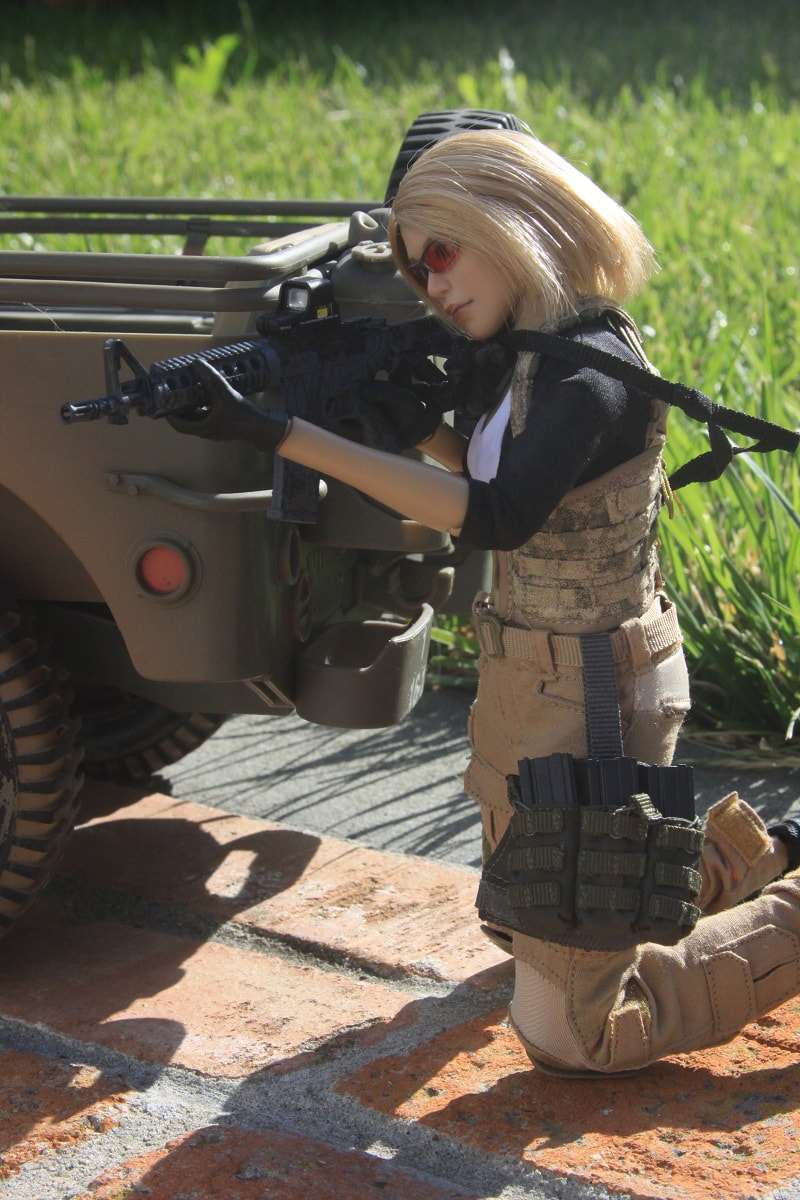 As you can see, the pants allow her to do most poses. I also like that the knee pads actually line up with her knees. Just a fun little detail... 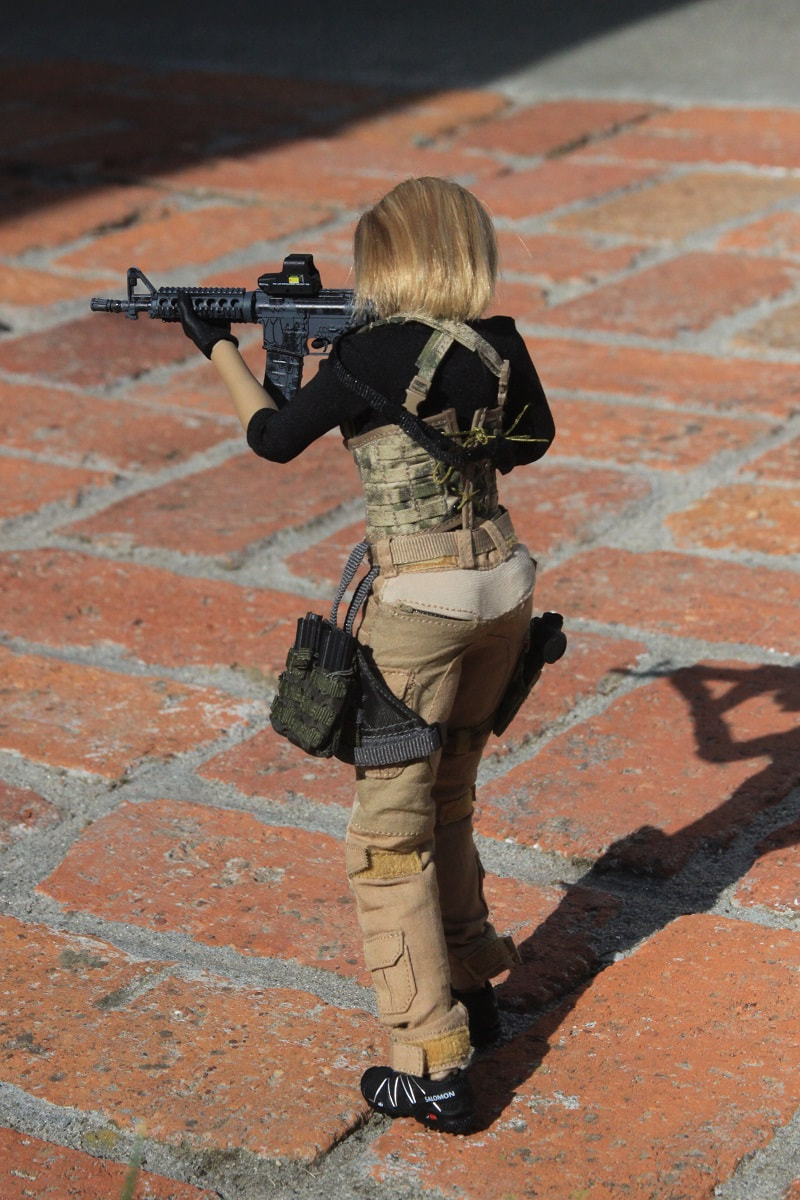 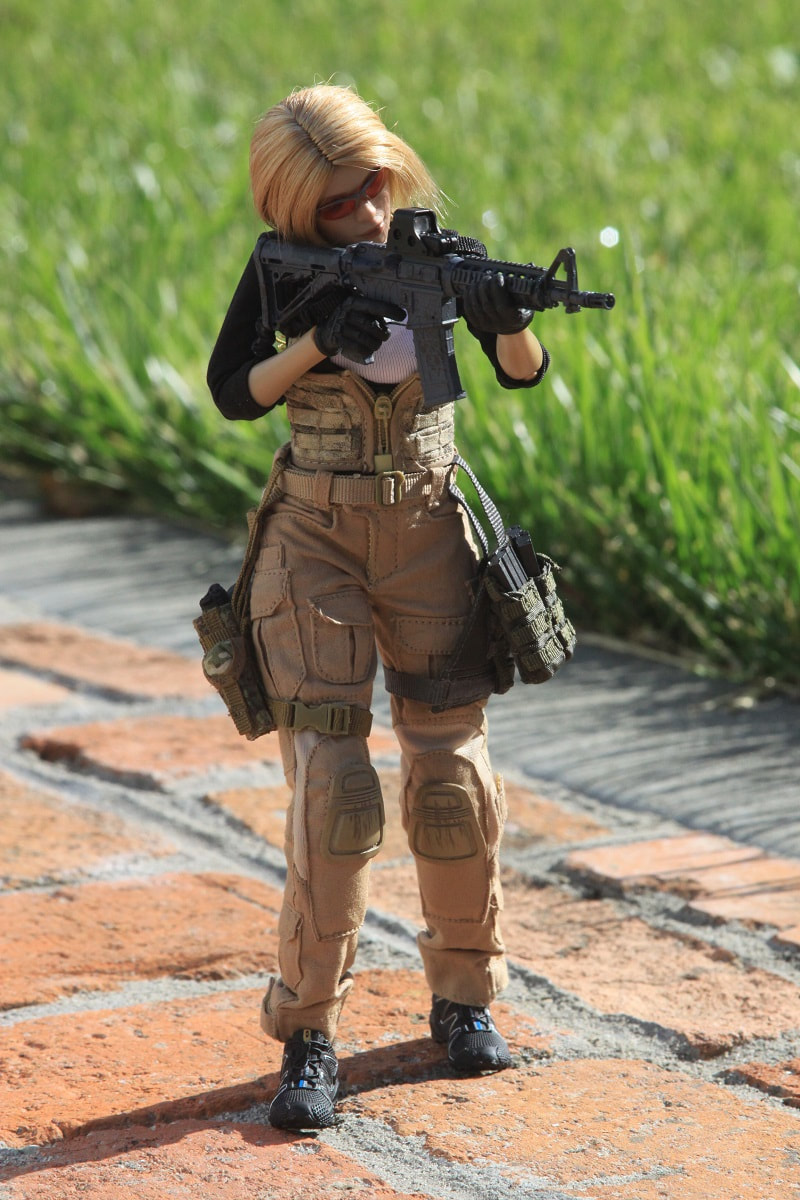 Vicky is very much a work in process at this point. Aside from some adjustments, she still needs a radio (I have the radio, just not the pouch yet), and maybe another item or two on her harness. I have hats that will fit her, but I've decided I prefer her without a hat.

A big thanks to Blonde Action Man for doing this trade!