DAM Toys is a powerhouse in the action figure hobby. They specialize in military figures, though they have branched out to other genres. Gangster's Kingdom is a line of figures inspired by crime movies, and they also have the license to make Assassin's Creed  figures.  Sprinkled among these lines are a few female characters, but they have a dedicated line of female figures called Combat Girl.  Lucy is in the current- the second- release in this series.  So far each release consists of two different versions that share the same head sculpt.

The first series was called Gemini, and consisted of two variants, Zona and Vicky. Unfortunately I missed out on these as full figure sets (they immediately started to command high prices in the secondary market), though I did buy a good deal of their parts.  I decided that I would not repeat this mistake with the second release, and purchased one from a U.S. on-line retailer as soon as they started to ship them.

This second release is called Pisces, and as with Gemini has two variants- Nana and Lucy. I chose Lucy because I already have plenty of black BDU clad figures and Lucy's clothing fits in with the female operators in my saga.

Here's Lucy as she came out of the package: 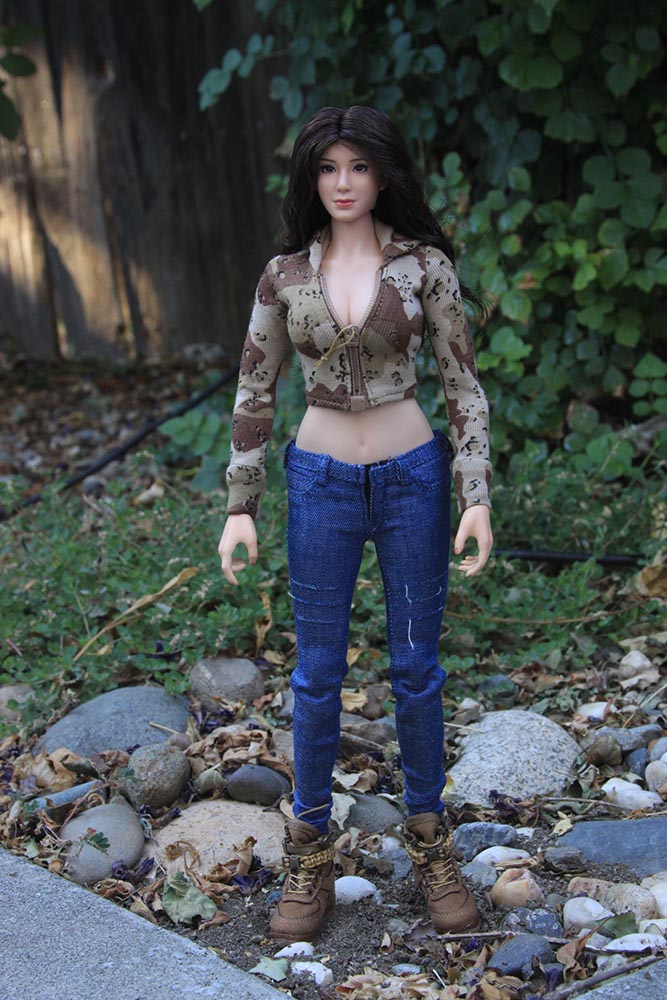 At first I was a little disappointed with the head sculpt. Zona and Vicky looked realistic; Lucy kind of looks like a doll. That was my first impression, but now that I've been looking at her for a few days, I'm beginning to change my mind. Maybe I won't replace her head after all. 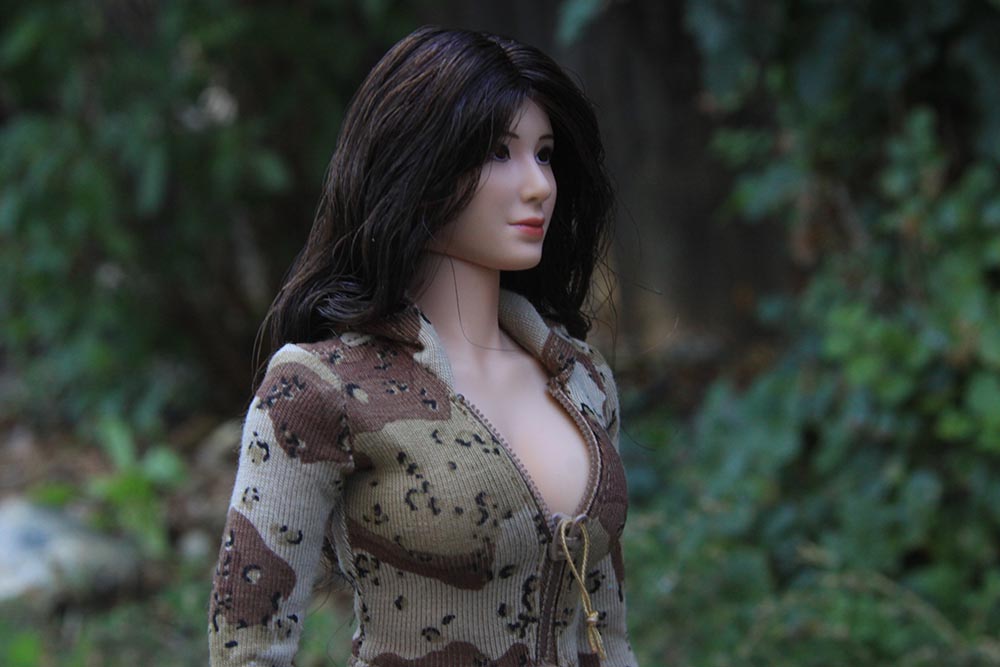 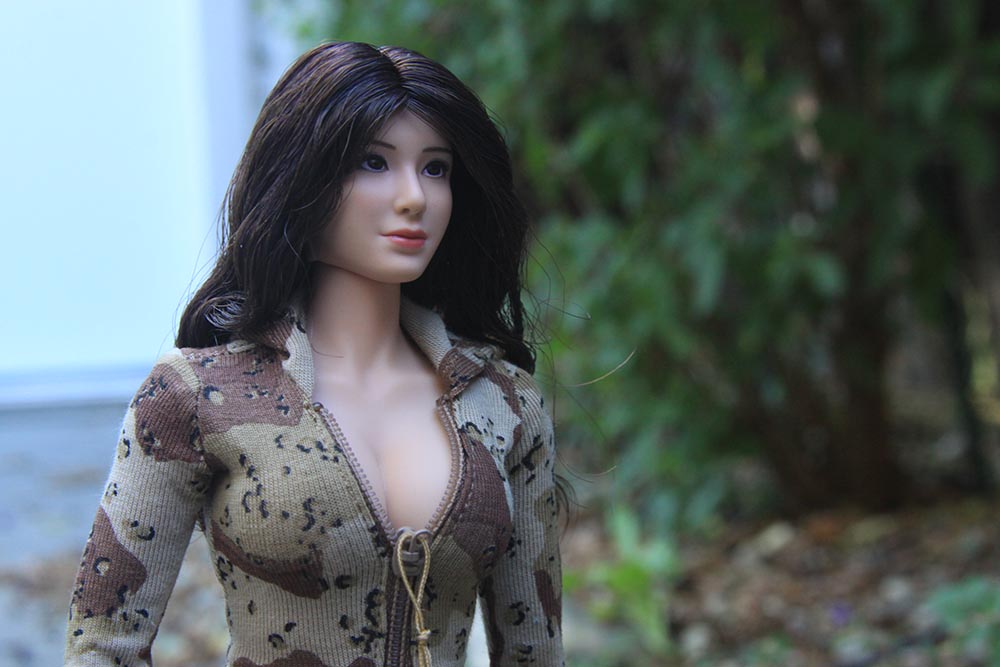 DAM makes their own bodies, and I have to say, this female body is quite nice. It's very similar in design to the female Very Cool body.  VC has a bit more sculpting on the torso, and a bit more articulation in the shoulders (thanks to use of pins to mount the arms, and a more flexible material for the upper torso). Other than that, I don't think the DAM body gives up a whole lot to the one by VC. I haven't undressed her yet, but I think the DAM body is finished a bit better than their rival.

As for her clothes, the first thing I noticed are her pants (that's a lie, it was her top, but I want to talk about her pants). I'll just come to the point: skinny hip-hugger jeans are great if I ever depict Lucy in a shopping mall, but they don't serve her well as a "combat girl" (I refer to her as a private military contractor- PMC). The jeans are beautifully made, and have really nice details, but they really restrict her movement. She literally is good for standing poses, the pants severely limit the range of motion of her lower body. Not to mention they practically slide off her butt if she sits. 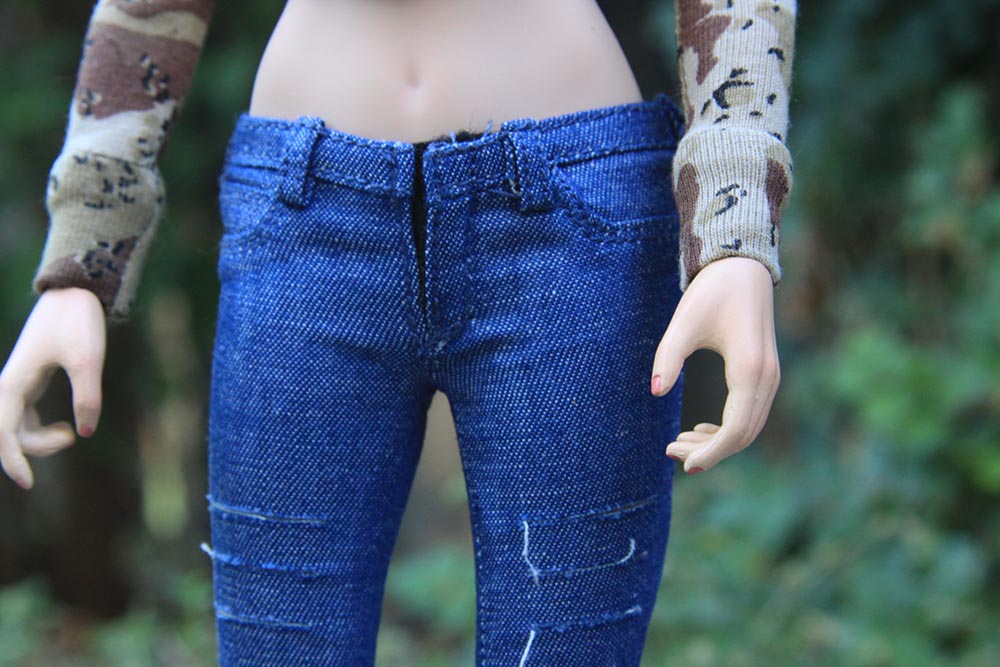 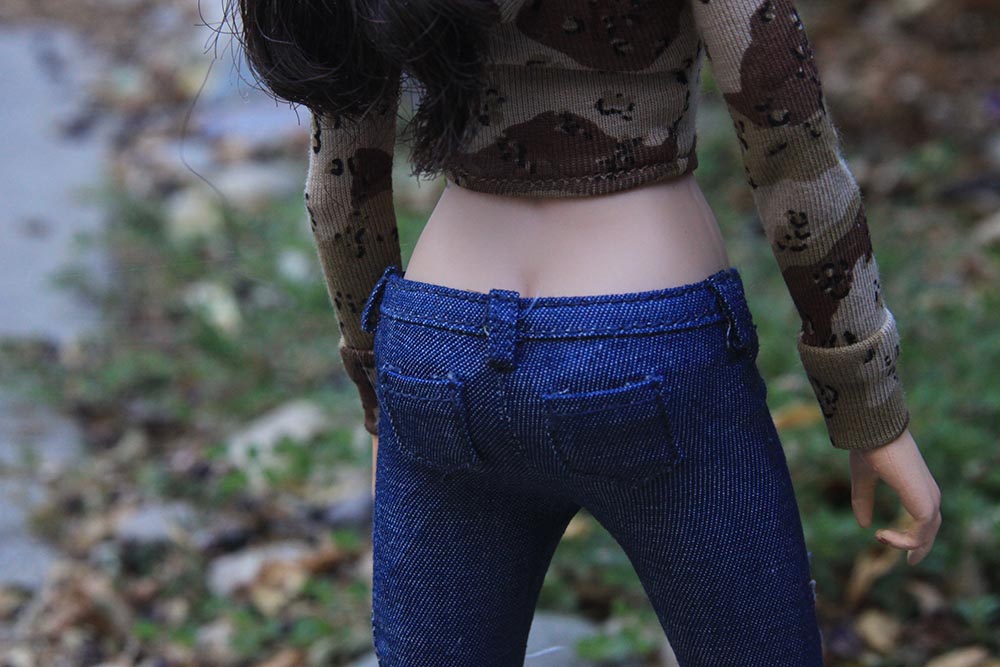 One item of clothing Very Cool does exceptionally well is fabric boots. They set a new standard for boots and at one time many military action figure enthusiasts lamented that nothing was comparable for male figures.  I never purchased the boots from the Gemini twins, but I can say that DAM is a challenger to VC's status as the king of boots. 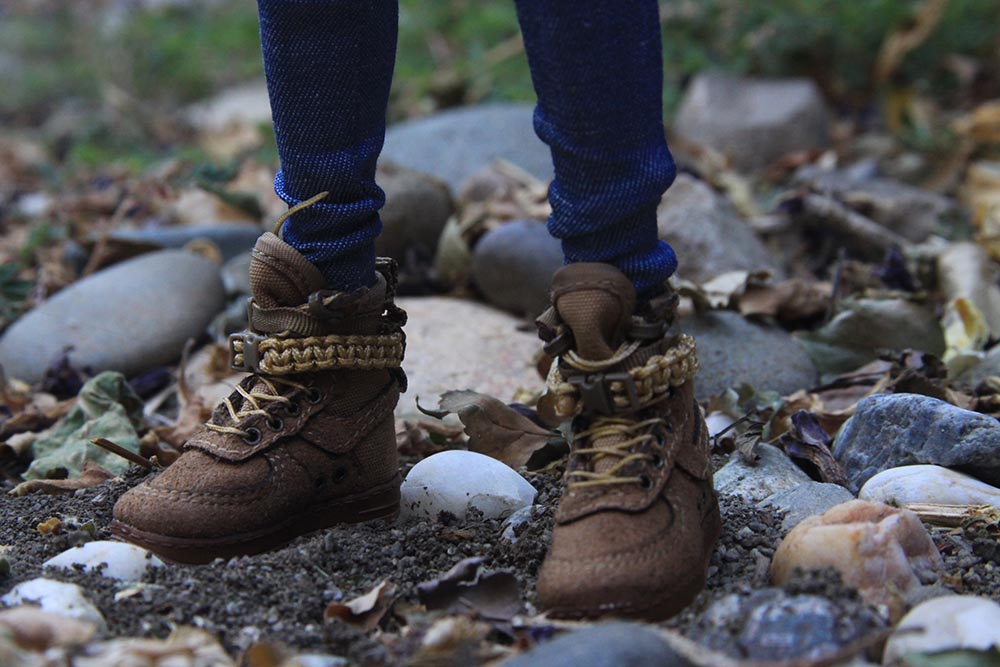 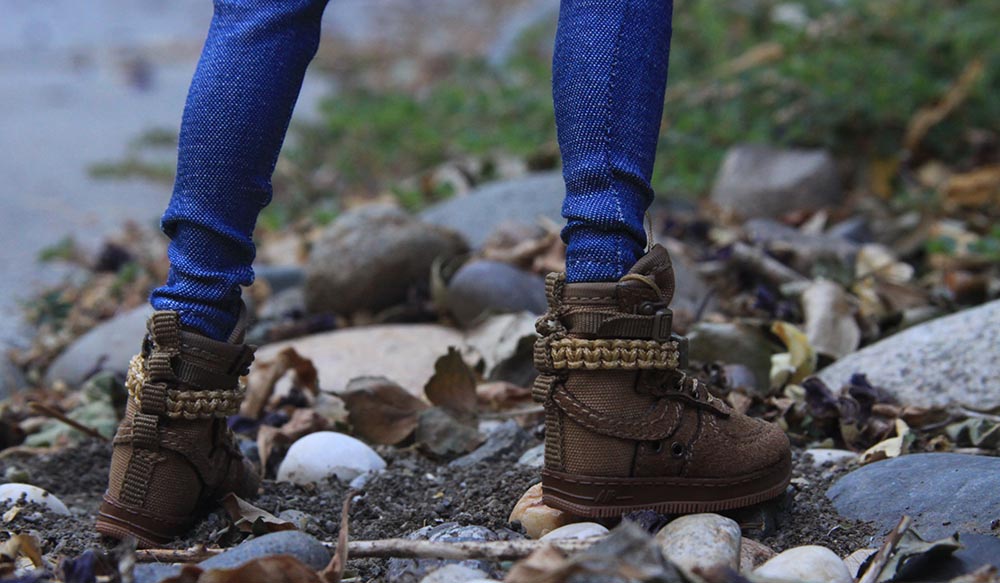 What I didn't show in the above photos is the nicely detailed pattern on the soles. I haven't taken these off as yet, but I think they're of the "boot foot" design. I haven't seen a DAM Toys female with bare feet (the male body has really nicely sculpted feet).

One last initial "out of the box" observation is her crop top hoodie. It's a nicely made item, in keeping with the rest of the clothing. Both DAM and Very Cool are careful to cover up exposed joints. Their tops are usually long sleeves or 3/4 sleeves (Gemini had separate arm sleeves).

While her top shows off her beautiful bust line, I have to point out that it does zip up, thanks to a nicely scaled zipper that functions smoothly, even over two large contours: 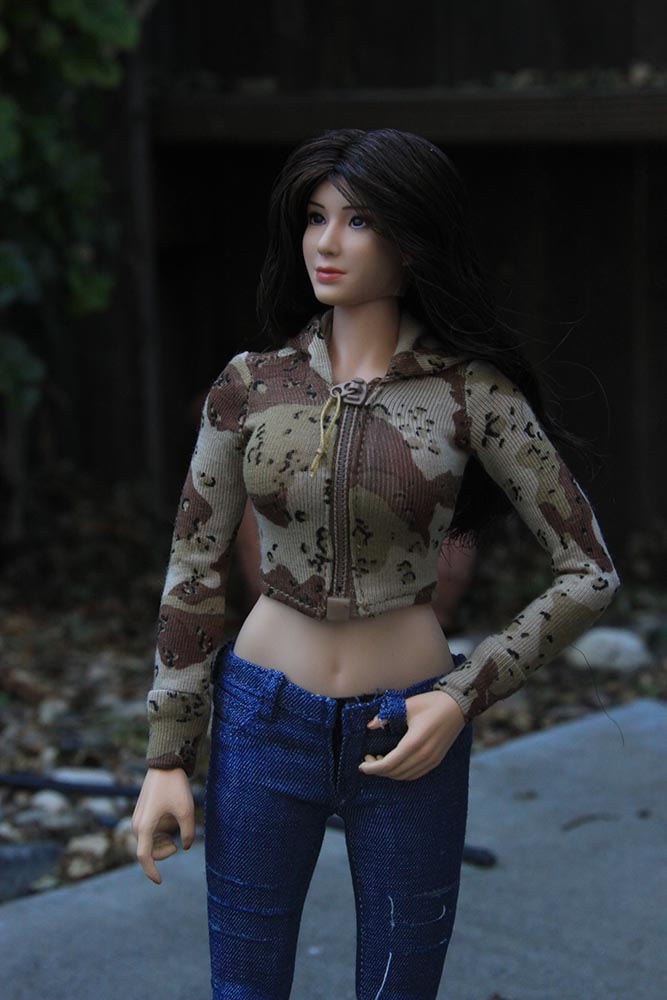 It's simply way too hot here to be zipping up like that though...

Okay, on to all the cool stuff she comes with. This is where DAM clearly has the advantage over Very Cool. For the same price as VC's "Female Shooters" DAM provides a lot more stuff and leverages their experience with military figures to much more fully equip their "Combat Girls": 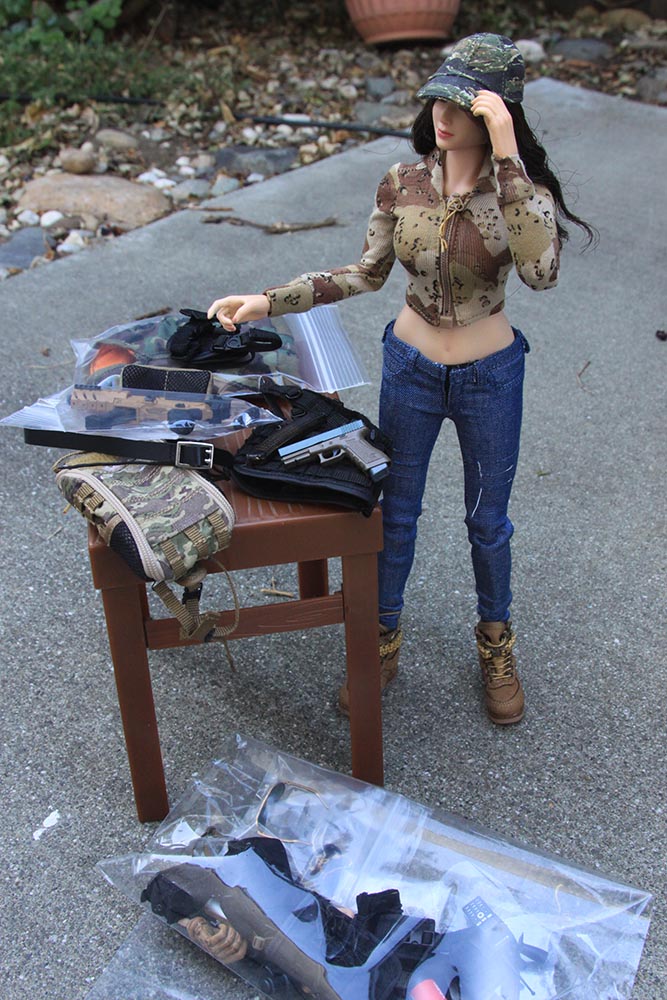 it quickly became obvious that putting all these small parts on a table outdoors wasn't a good idea.  I decided to move Lucy indoors to load up her equipment.
Here's Lucy the next day, pretty much loaded up: 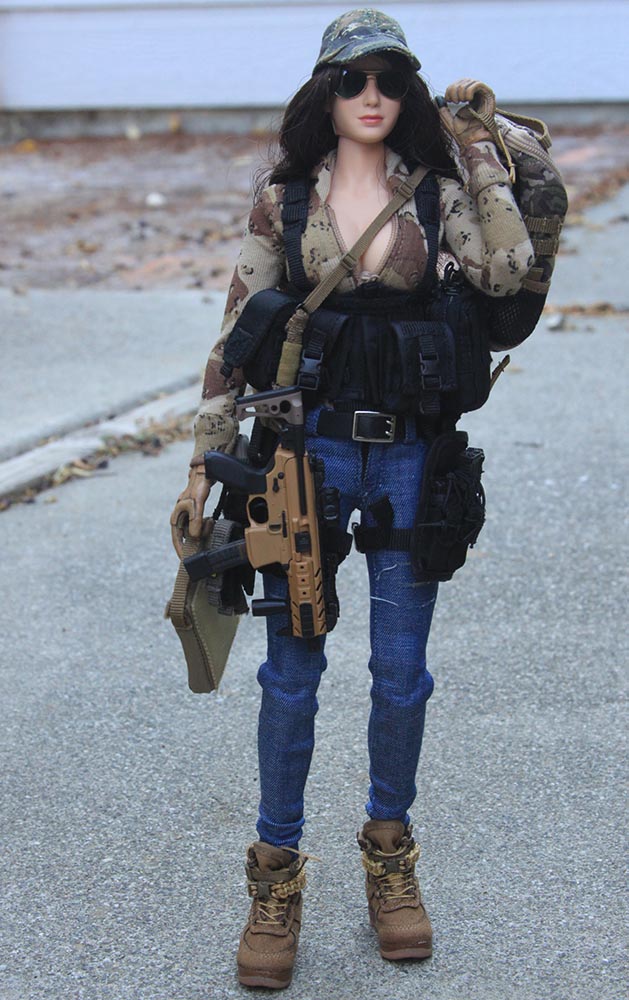 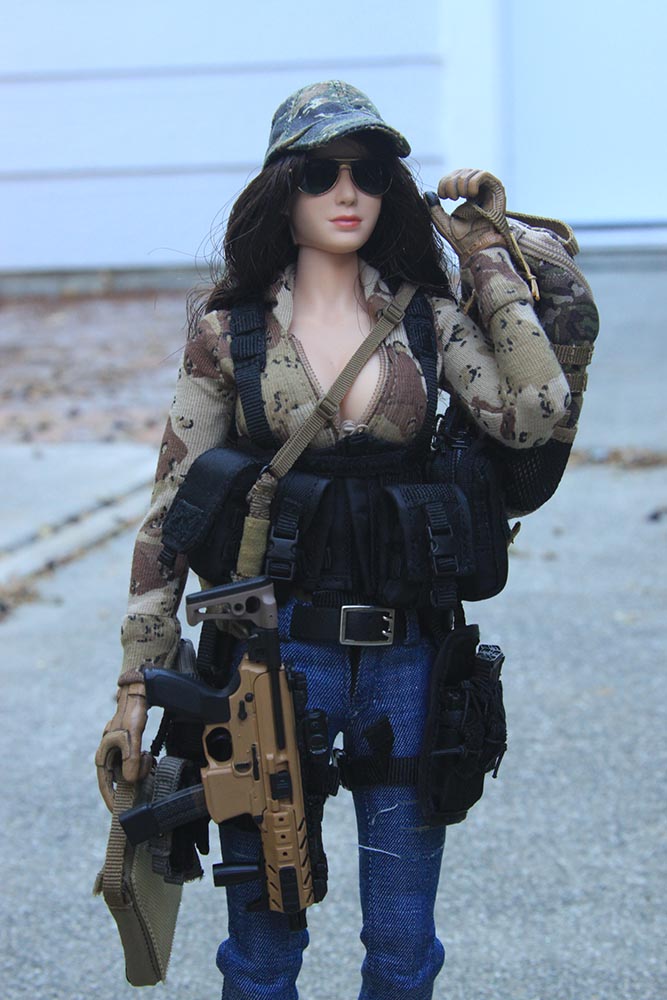 DAM pretty much provides everything to make her a completely equipped operator, and then some. Everything you see here is included, nothing had to be added. I generally don't heavily load my figures, and in fact I wasn't sure I was going to use the four various pouches that are attached to her harness. A small detail I like is her "leather" belt, with the cool buckle. The belt has a double row of holes, but the buckle is actually simulated and doesn't require the use of the holes. It works for me! She's holding what looks like a laptop bag in her right hand, and a backpack in her left hand. Of course, the stand-out weapon is the Sig Sauer MPX machine gun.

Here's a detail view of her right side: 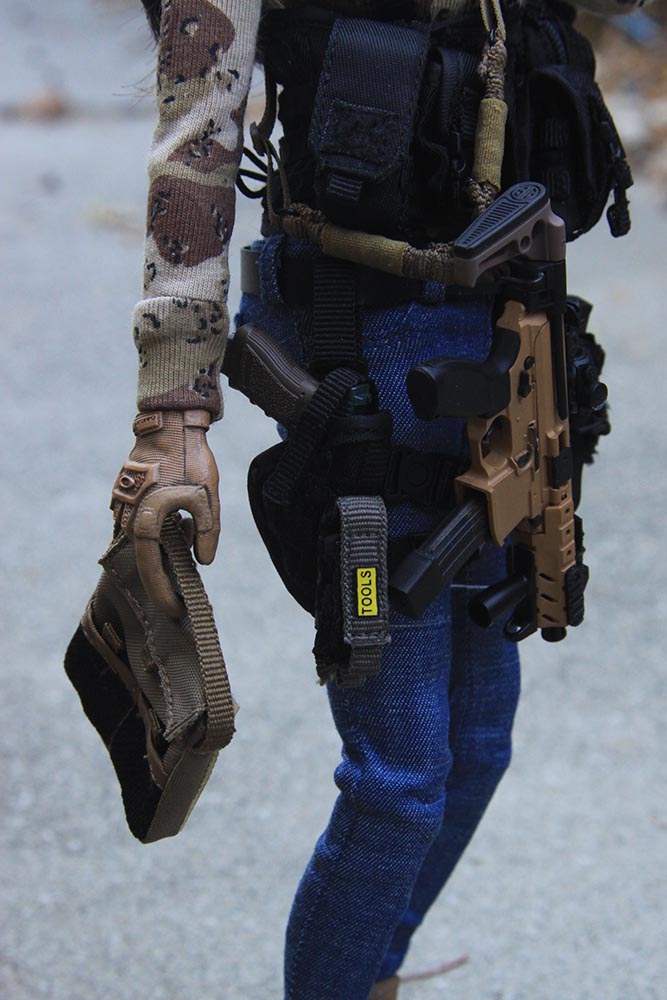 Her sidearm is a G18 automatic with a cloth holster. The tool pouch attaches to the holster with straps. I'm not surprised by the tool pouch (which I think would hold some sort of multi-tool), but I would have thought an extra clip for her automatic would go there.

It's also worth noting that she's changed to gloved hands. This is a really easy process- the attaching pegs simply slide securely into the arm sockets- no heat required.  It's a lot of fun to be able to easily switch hands during a photo-shoot, especially an outdoor one. The gloves are nice and flexible.

Here's a view of her left side: 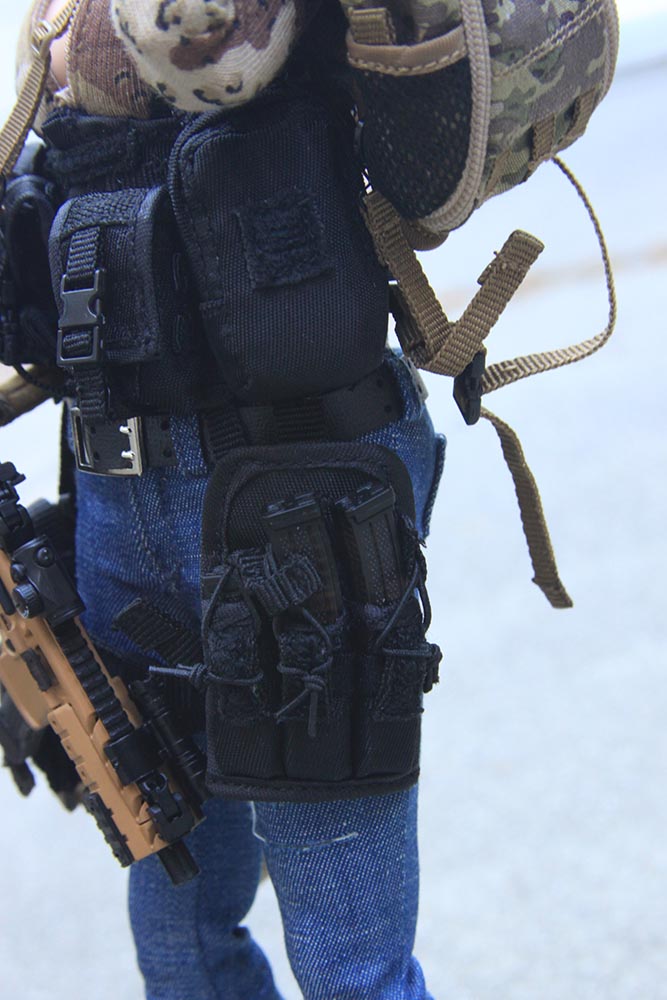 The main thing I wanted to show is that DAM provides 3 clips for the machine gun. The elastic is supposed to go over the clips to secure them into the pouches. I left them off because these things tend to lose elasticity over time and become a tangled mess. The large pouch is supposed to get a patch that attaches with velcro. I'll get around to putting it on...

Here's a view of her laptop bag and her backpack. The pack is a one strap design, that I guess goes across. 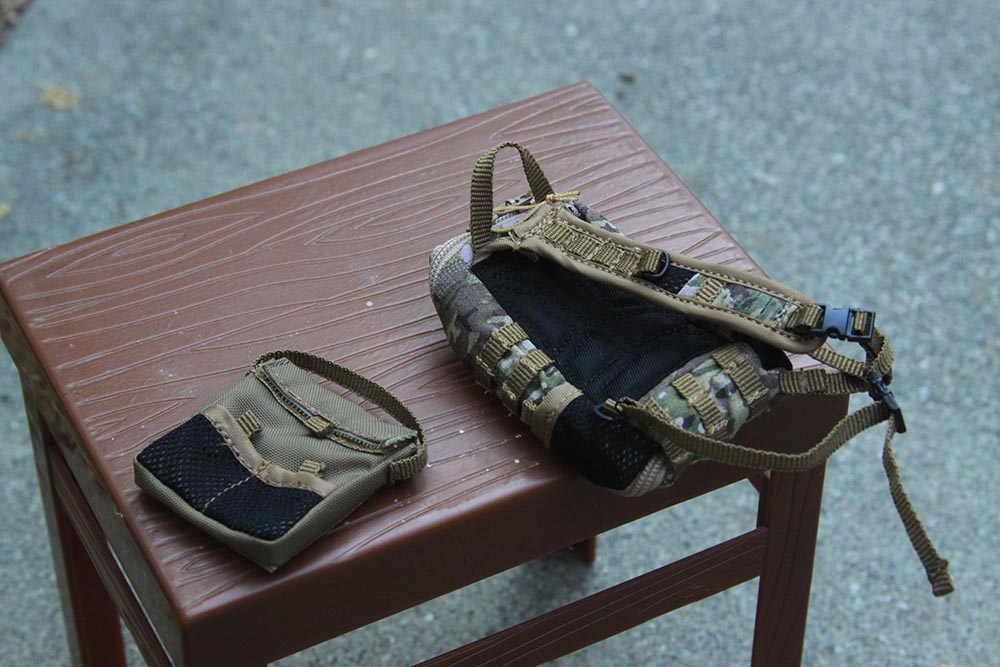 As I mentioned earlier, the standout piece of equipment is the Sig Sauer machine gun. Here's a closer look at it: 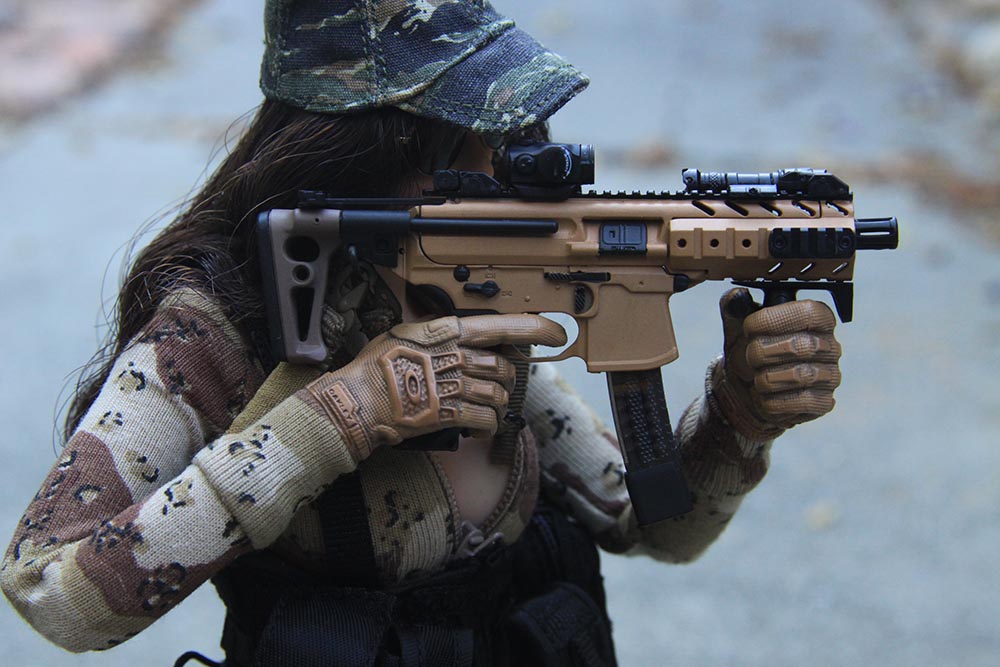 DAM makes exceptionally nice weapons, with crisp details. The various positions of the selector switches are labeled, the ejection port opens, and the knurled knobs on the optics are distinct, with the larger one labeled "Intensity" with a plus and minus sign on each end of the arrow. Some other things I like are the Oakley label on her gloves and the catch on the sling. 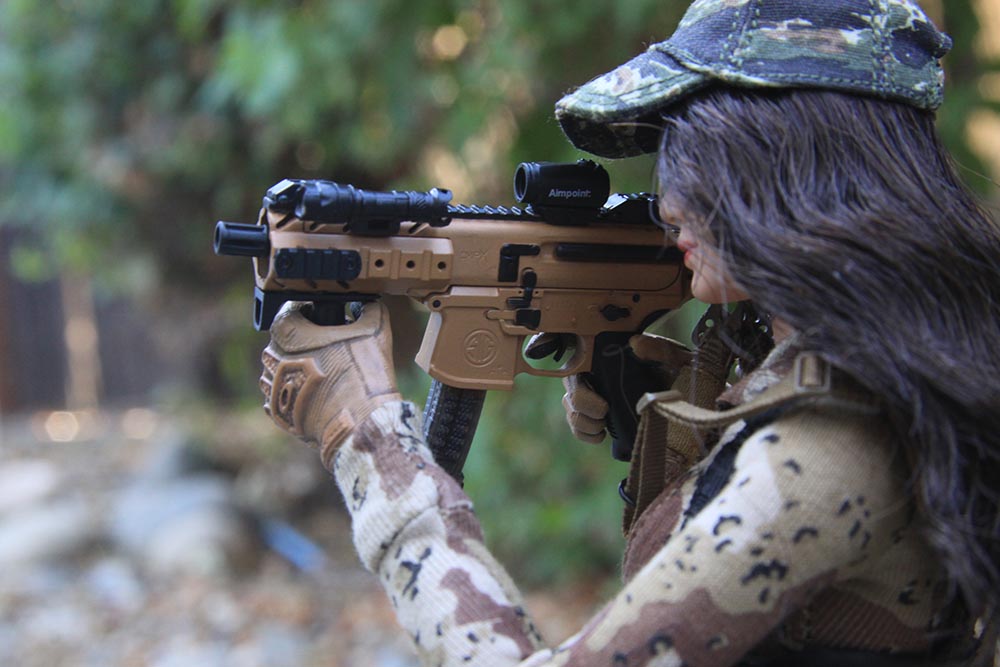 Here we can see more switches and catches on the machine gun, the Aimpoint logo on the optics and the Sig Sauer logo on the side. If you look closely just forward of the flash light, you can see the front mechanical sight that folds out. There's one at the back of the weapon as well. Hi-tech optics are great until the batteries die.

Just in case you think that's everything, there's still more: 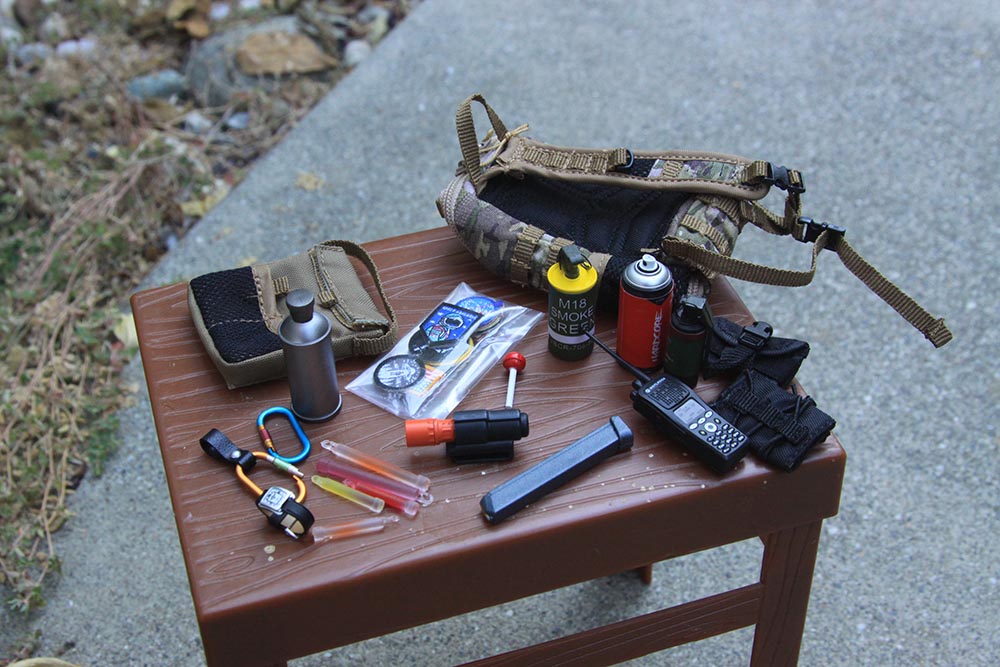 Besides the laptop bag and the backpack, we have these items: a thermal flask, 2 carabiners (one with a leather loop), a cool watch with a square face, a flashlight with holder (I have one just like it at work but mine is the same blue color as the carabiner), an assortment of patches, a lollipop (why not?), a smoke grenade, a can of pepper spray, and another type of grenade. Two additional pouches, and a nicely detailed Motorola radio (I'm thinking of giving her a radio with some sort of headset and boom mike), and a really high capacity clip for her sidearm. I love these 1/6th doo-dads! 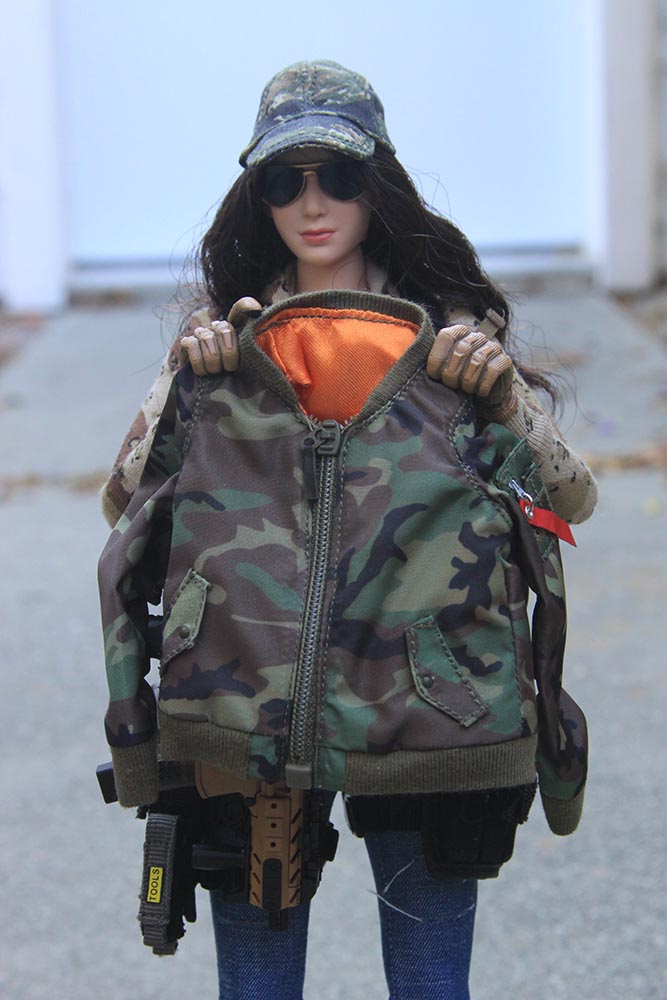 Lucy is showing you her camouflage flight jacket! Isn't it nice that we have scale zippers now? Anyway, as cool as this is, it's too hot to even try this on. I'll update this when she does put it on. 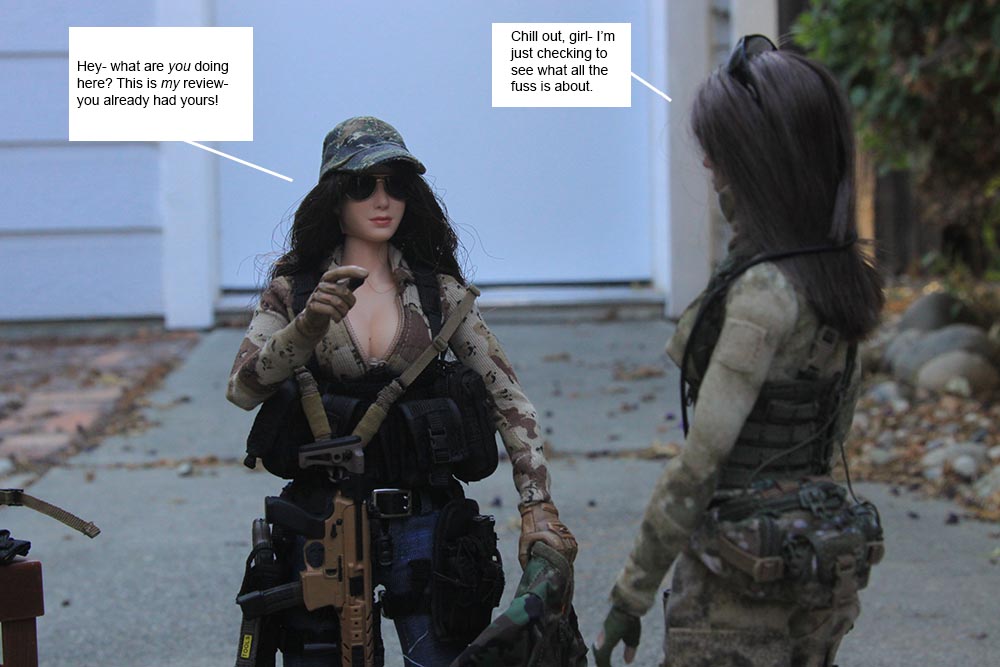 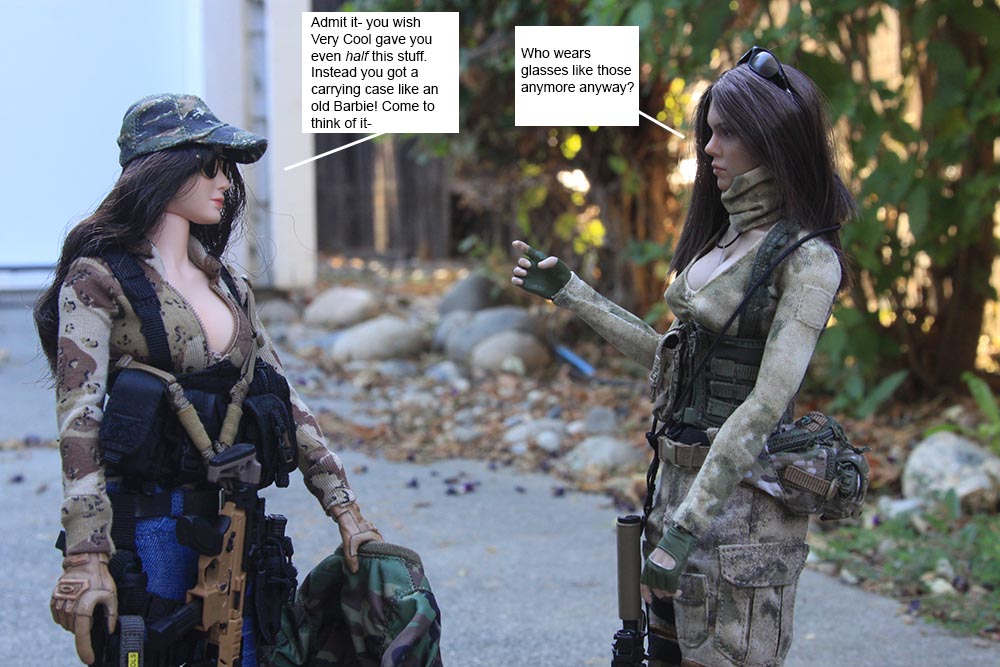 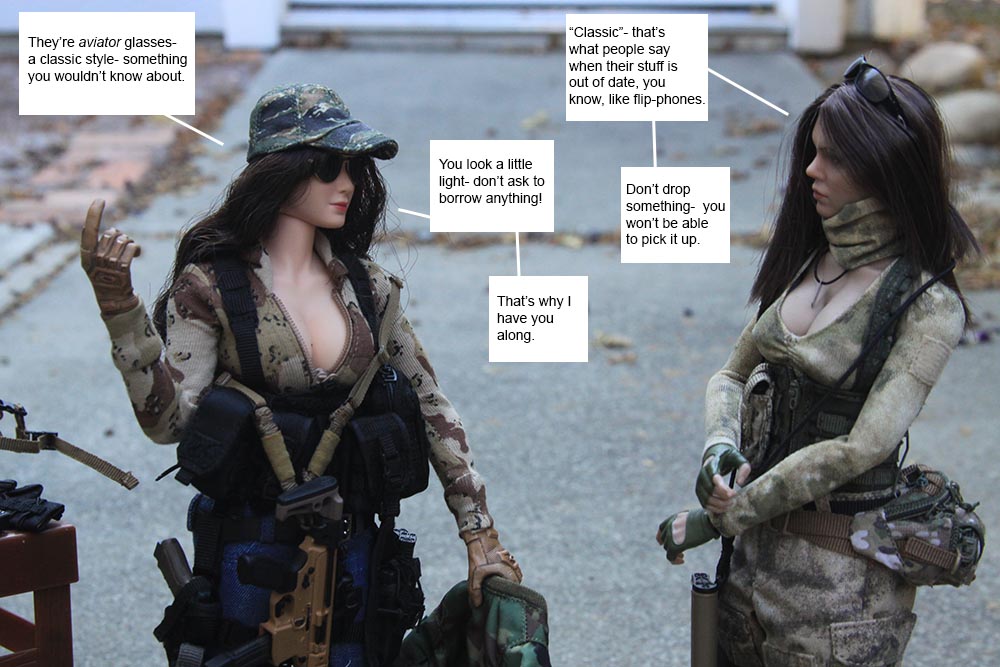 This brings the review of DAM Toys Combat Girl Lucy to an end. Jenner's updates will be shown in her review.