This is the first car that I modified extensively to accommodate 1/6th occupants. There are two ways to approach this: modify the figure or modify the car. Modifications to figures so they will fit in a car interior that is too small usually renders the figure relatively useless for any other use. An example would be to remove a portion of the lower legs so they don't have to actually fit under a dashboard.

In the case of this car, not only was the area under the dashboard too shallow, the roof was too low, and the steering wheel too far away. Modification of a figure simply wouldn't work for me here.

The first task was to remove all of the NAASCAR style stickers from the bodywork. Here's the car unboxed: 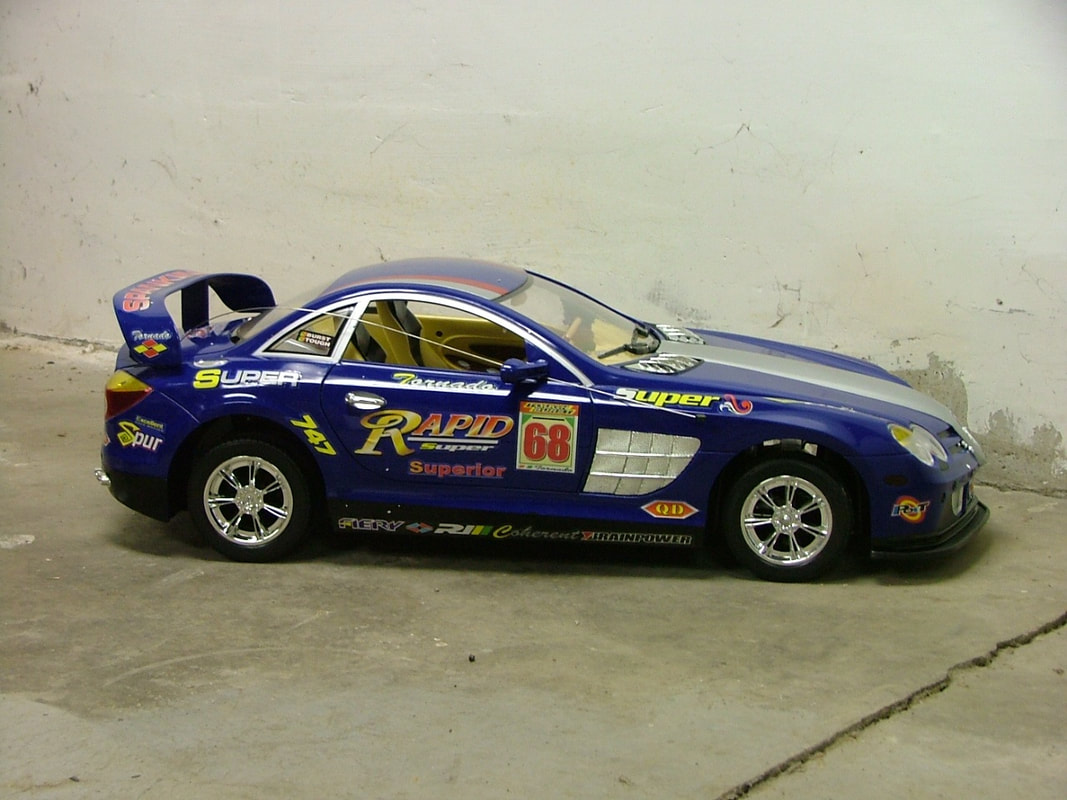 As with everything else in this project, what seemed like a simple task took far longer and more work. The decals were protected with an almost impervious film. It took hours of soaking and abrading with a solvent (Goo Gone) to penetrate the outer layer and soak into each sticker. The adhesive residue of each sticker was very heavy and required repeated applications of the solvent to completely remove from all of the surfaces. Here's an in progress photo of the decal removal: 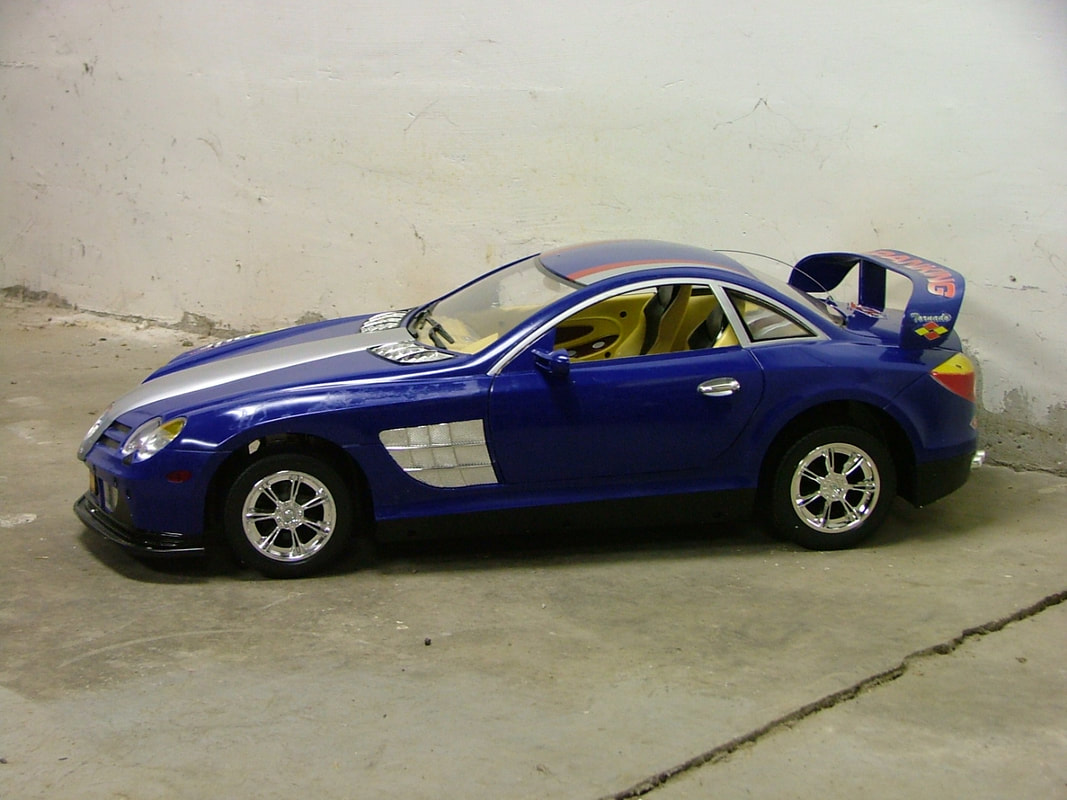 The removal process resulted in a lot of debris: 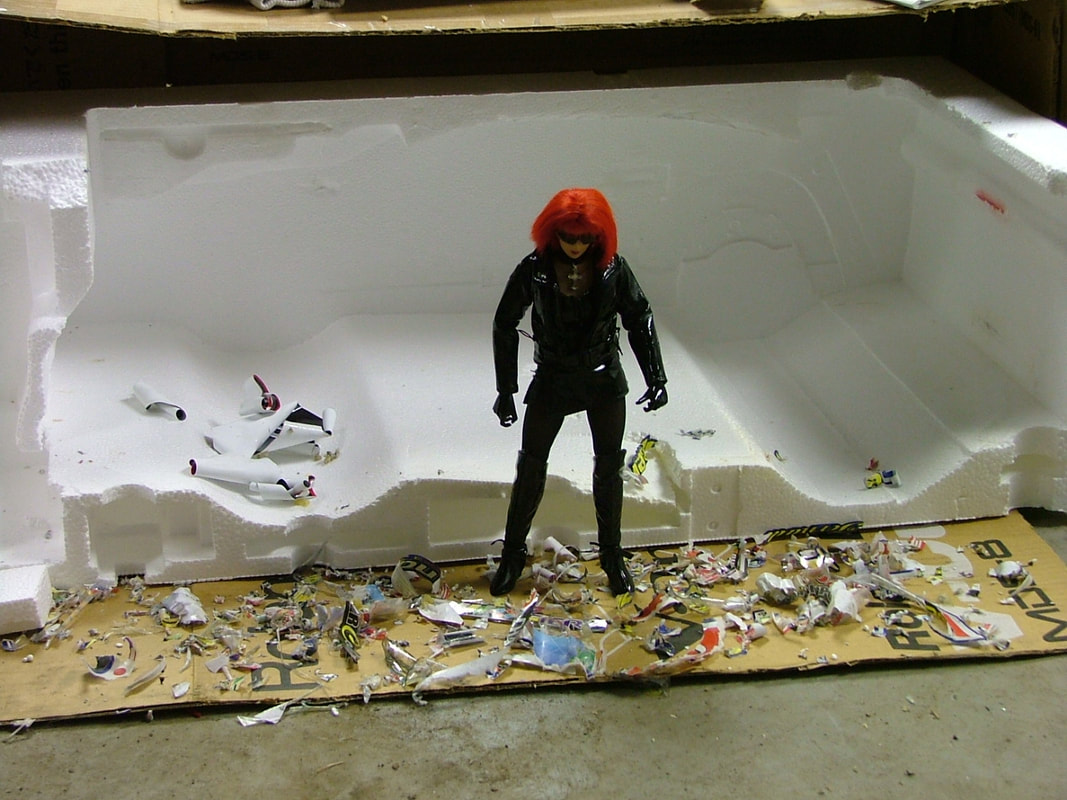 With the stickers removed, I decided to start on the interior. The first step was to separate it from the bodywork: 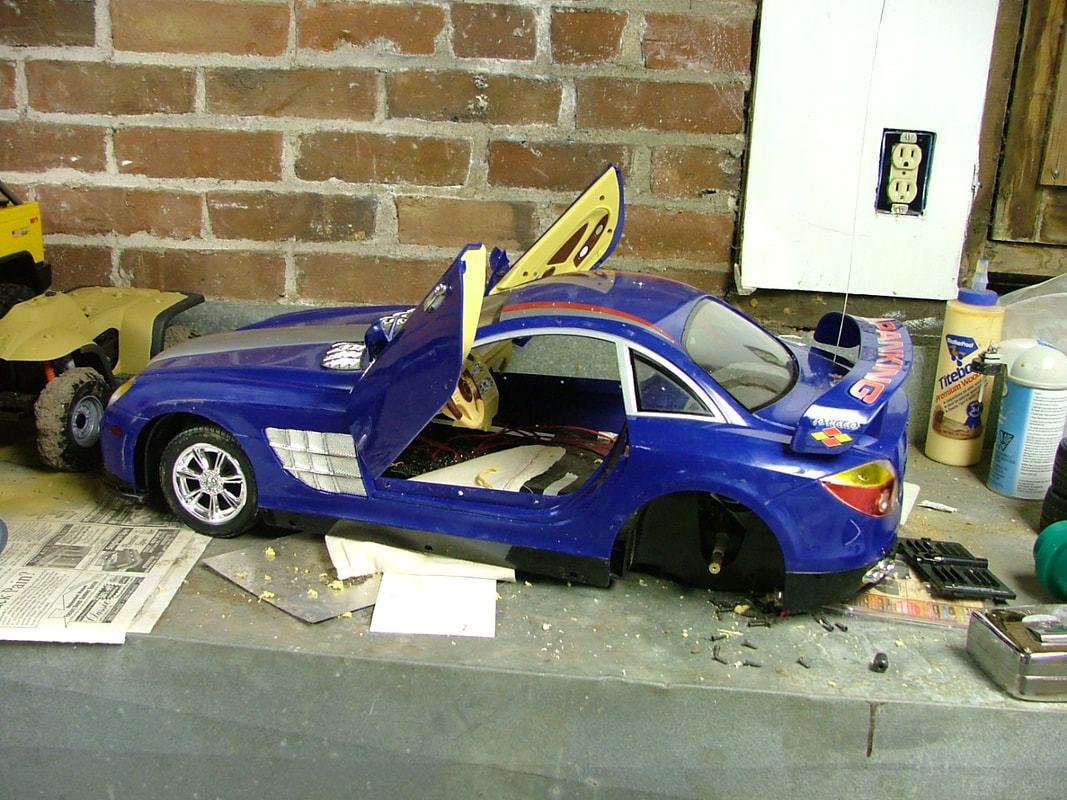 One of the first modifications I wanted to make to the interior was to remove the crazy monster stereo system the designers thought was cool. Ridiculous speakers and whatnot occupied the entire area behind the seats. Away with this nonsense! With the interior separated from the body, it was easy to put figures into the seats and test fit the interior with the body. This is when it became obvious that not even a GI Joe, my shortest figure type, would fit inside. Lowering the seat bottoms would allow for a significant amount of additional headroom. 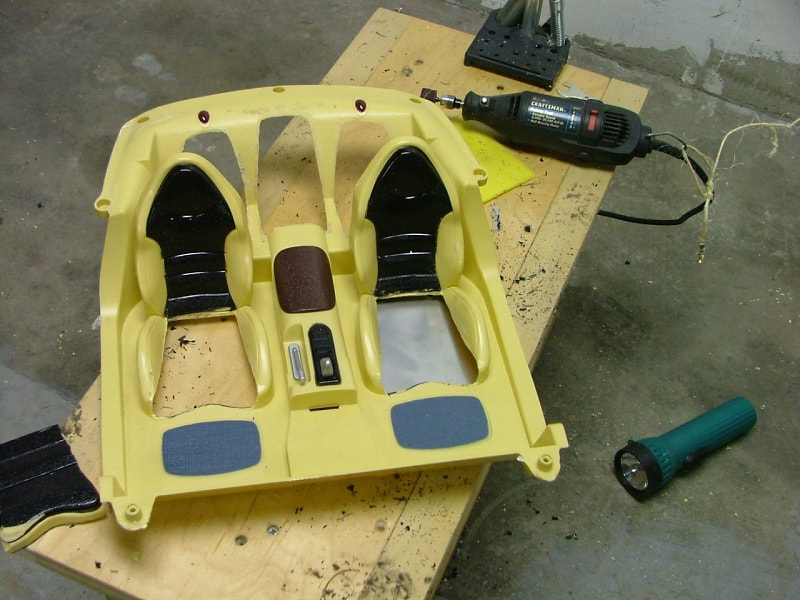 I used some flexible fiberglass sheets to fill the voids where the stereo was cut away. 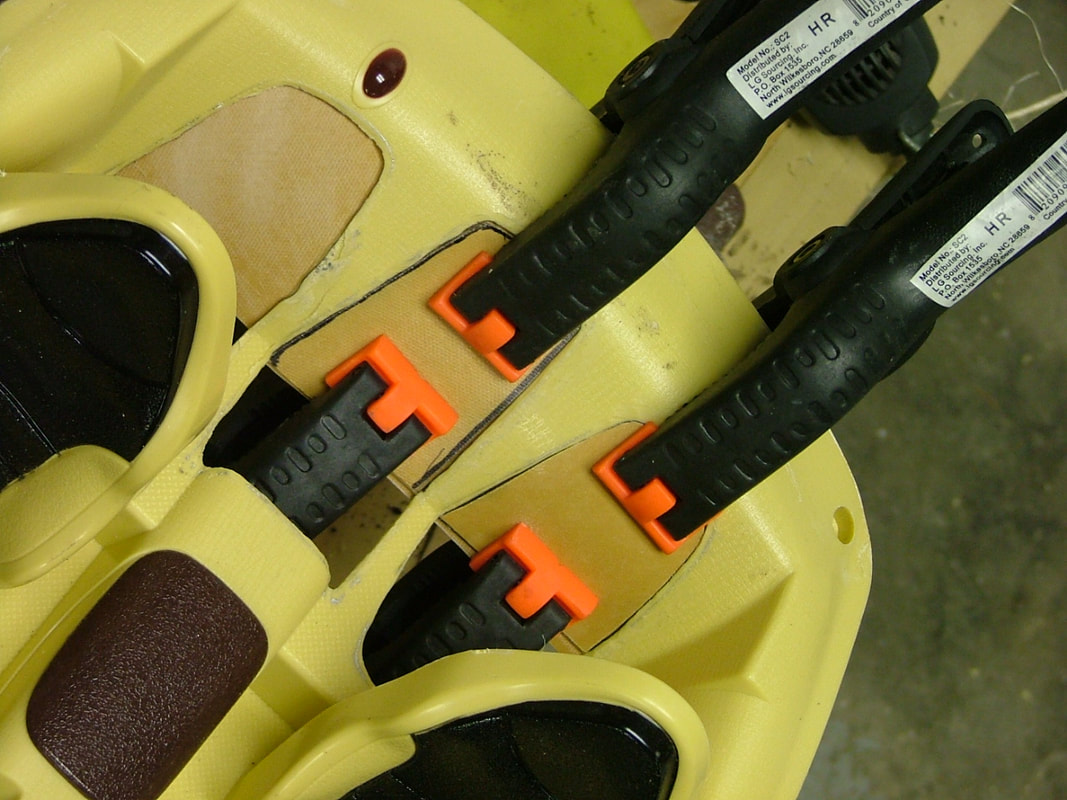 Here's how much additional room lowering the seats was going to provide: 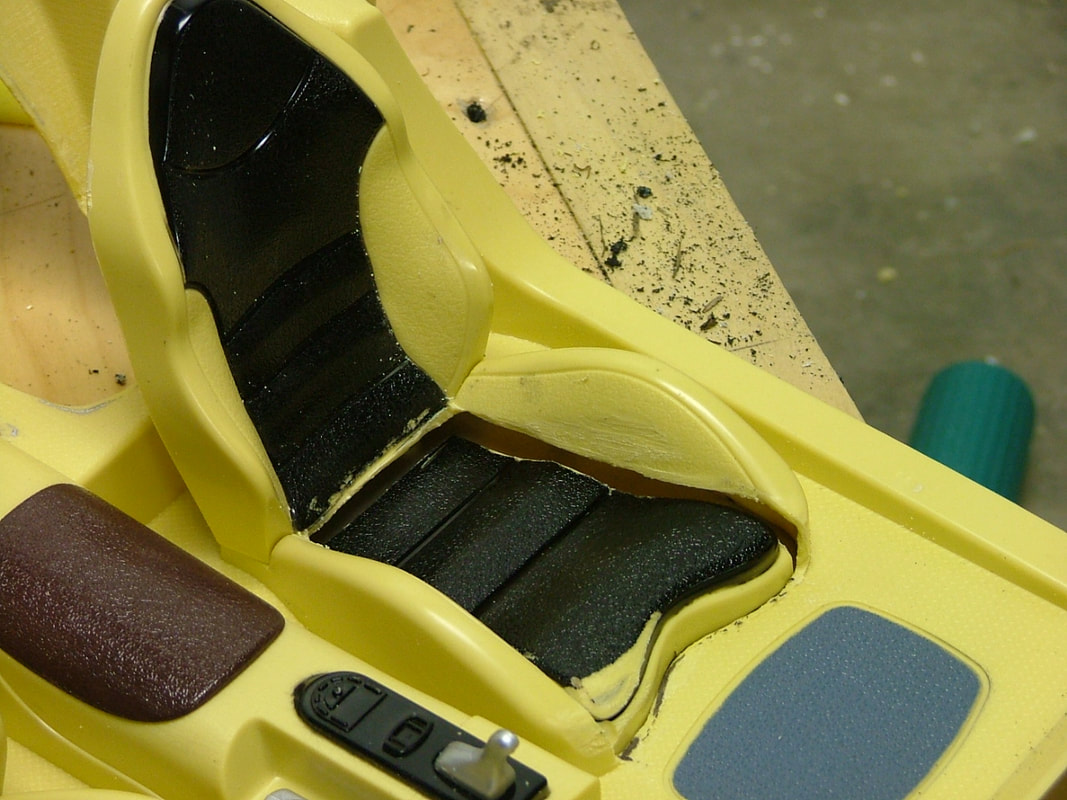 I bonded some thin aluminum to the underside of the interior to support the lowered seats, and to extend the floor under the dashboard a bit. You can just barely make it out in the photo below: 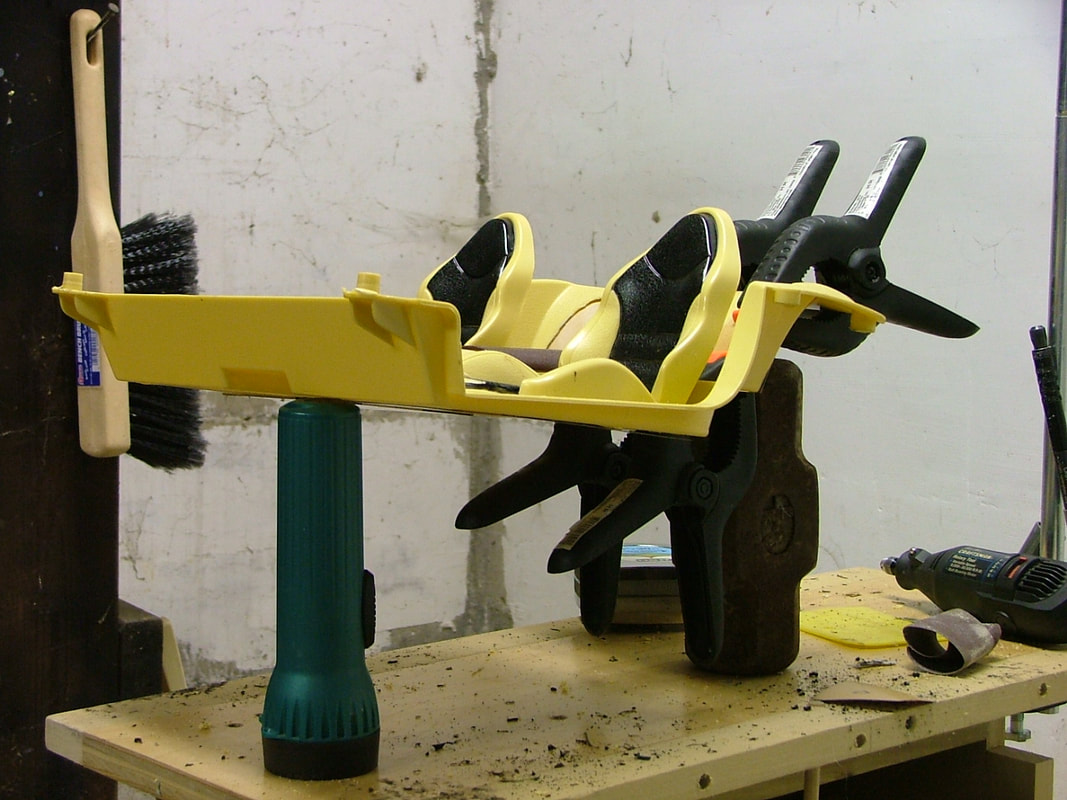 Eventually I got to the point of test fitting a figure to the modified interior. 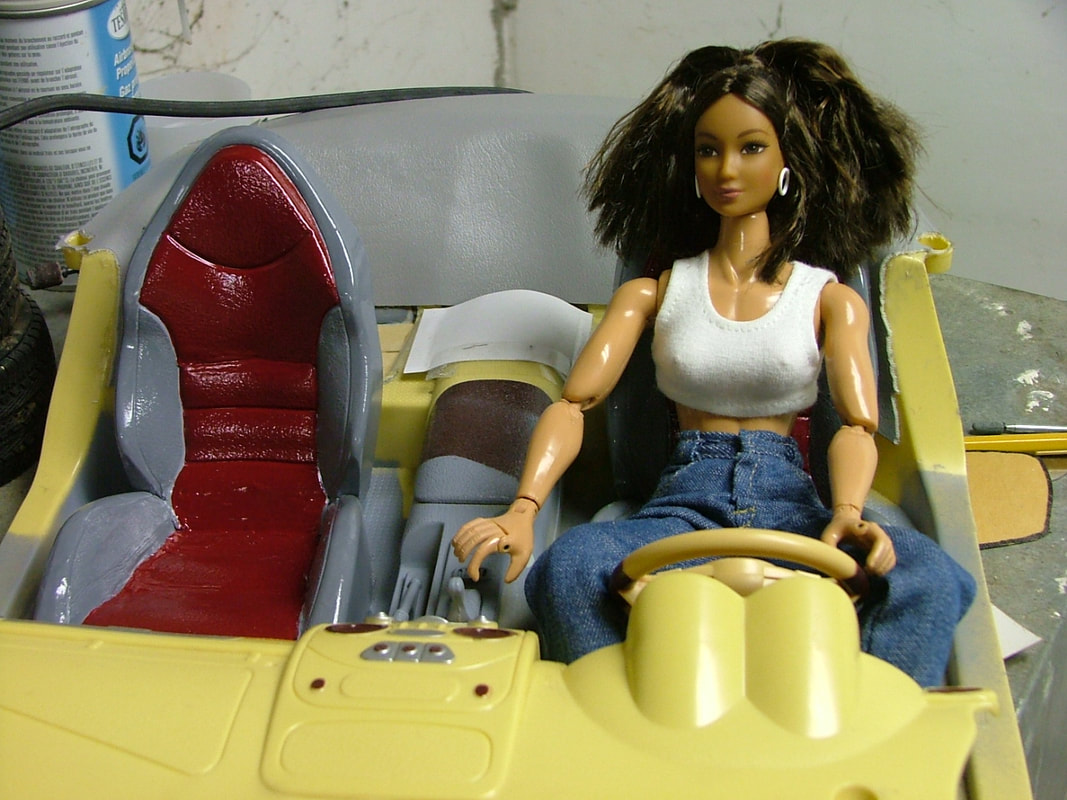 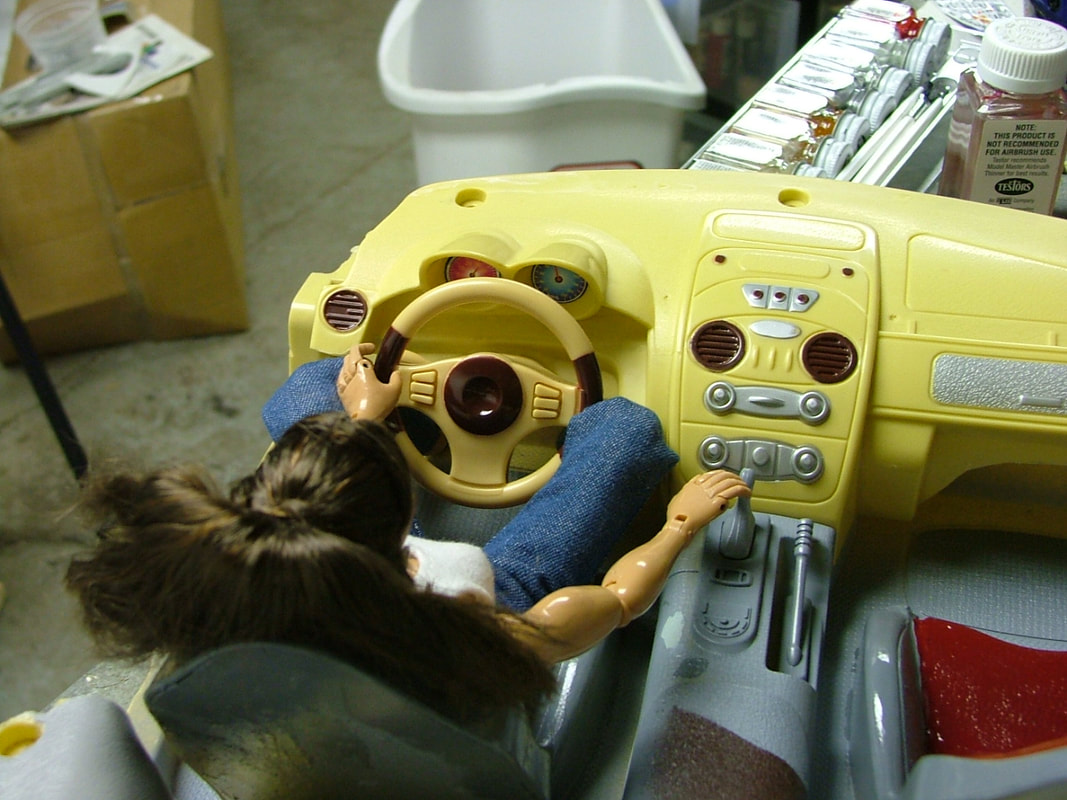 At this point at least some figures would fit, sort of. The floor area under the dash where it kicks up needs to be removed. You can see where I removed some of the lower dashboard on the passenger side; I did the same on the driver's side. I also didn't like that the gear shift lever was too far away.

Most of my attention at this point was focused on the interior, but there was still a piece of bodywork that I didn't like: the tacked on looking rear wing. That needed to go! It was held on with fasteners from below, and I filled the openings. Getting these openings completely smooth turned out to be quite a challenge.  The results were far from perfect even after many attempts. I really appreciate a good body and fender technician. 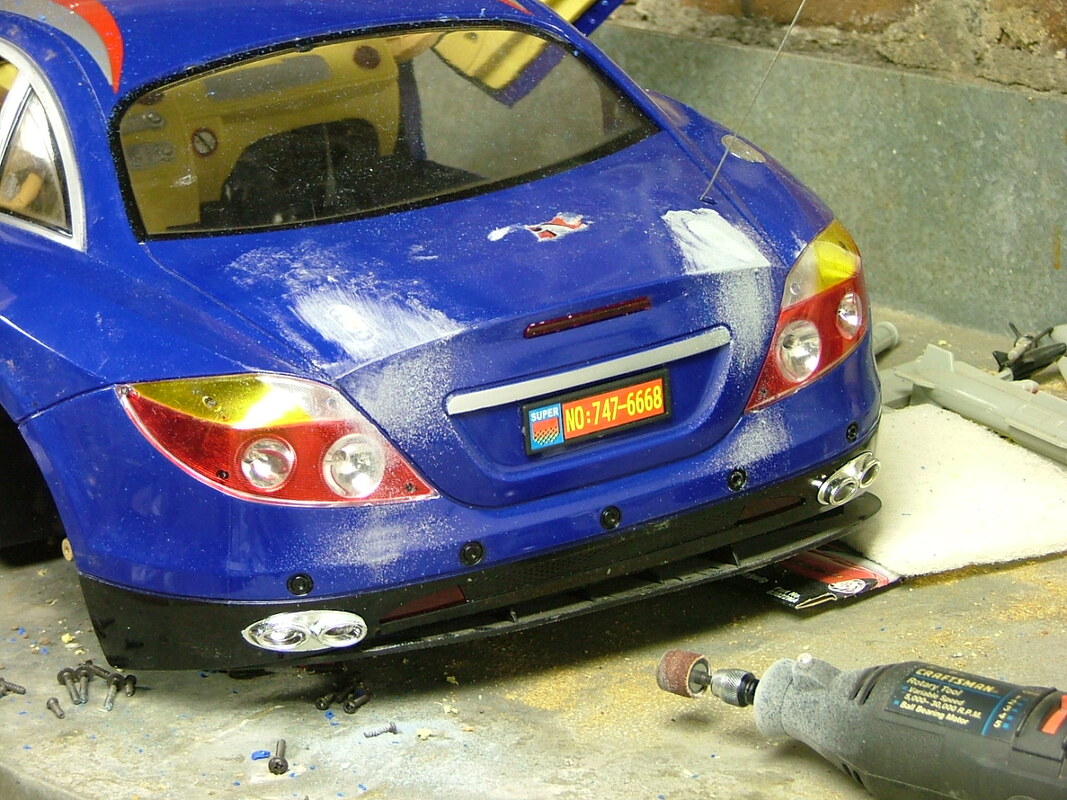 The GI Joe overseeing this project was getting a bit impatient. Can't blame him really, it was a far more extensive rework than I had imagined it would be!  He tried hard to be helpful and keep himself busy. 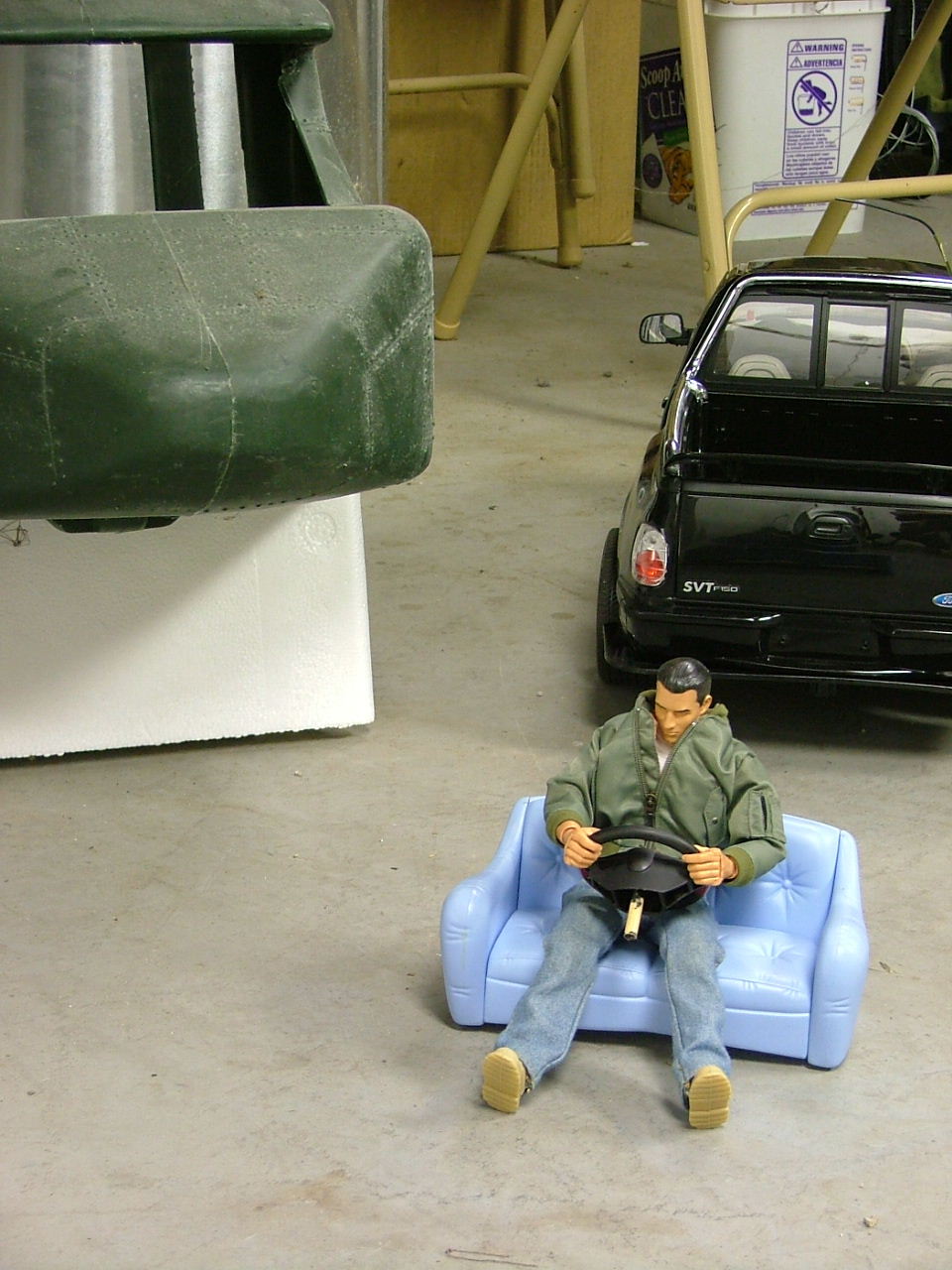 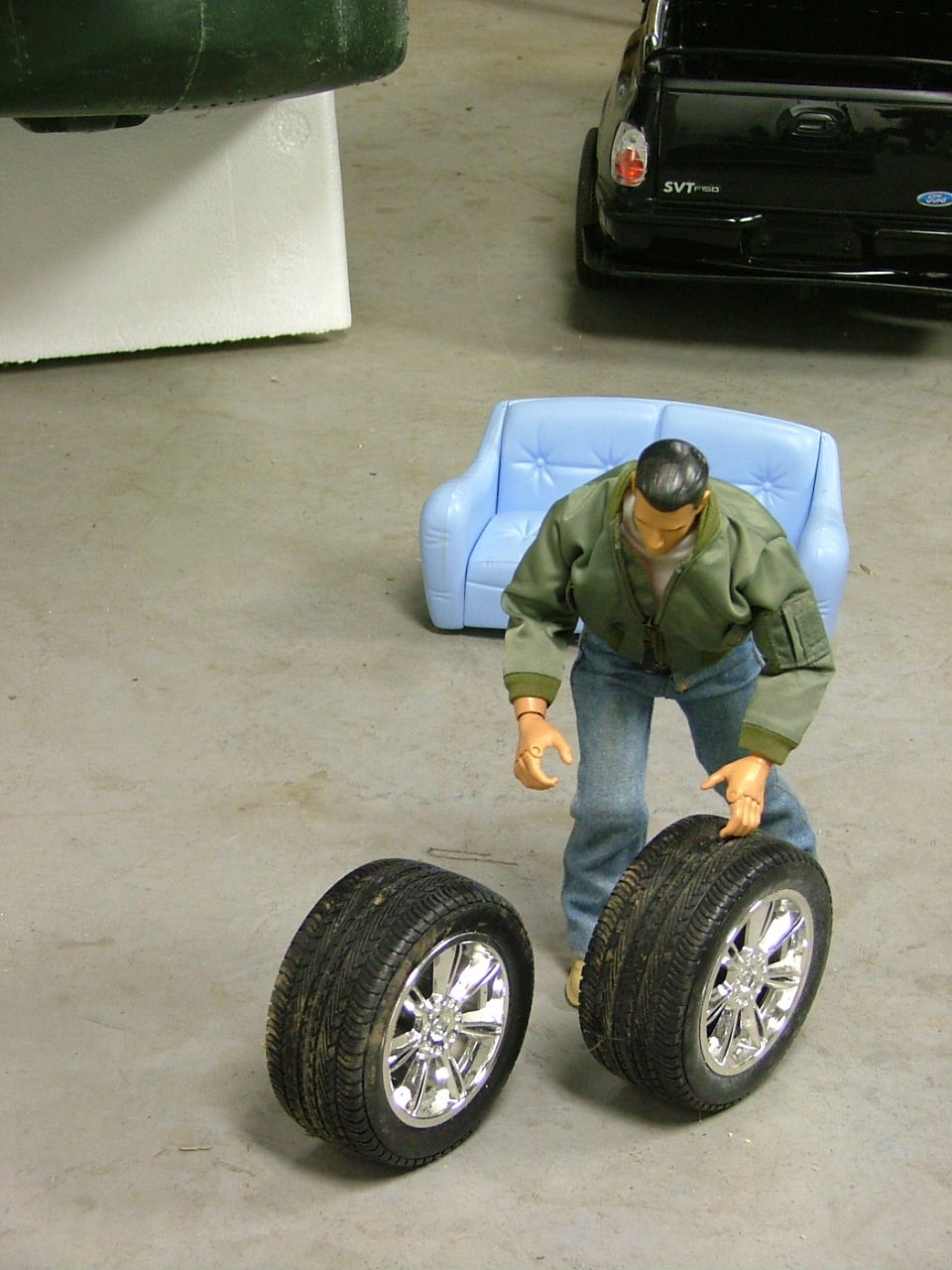 It was finally time to paint the exterior. Silver seemed to be a good color for it. 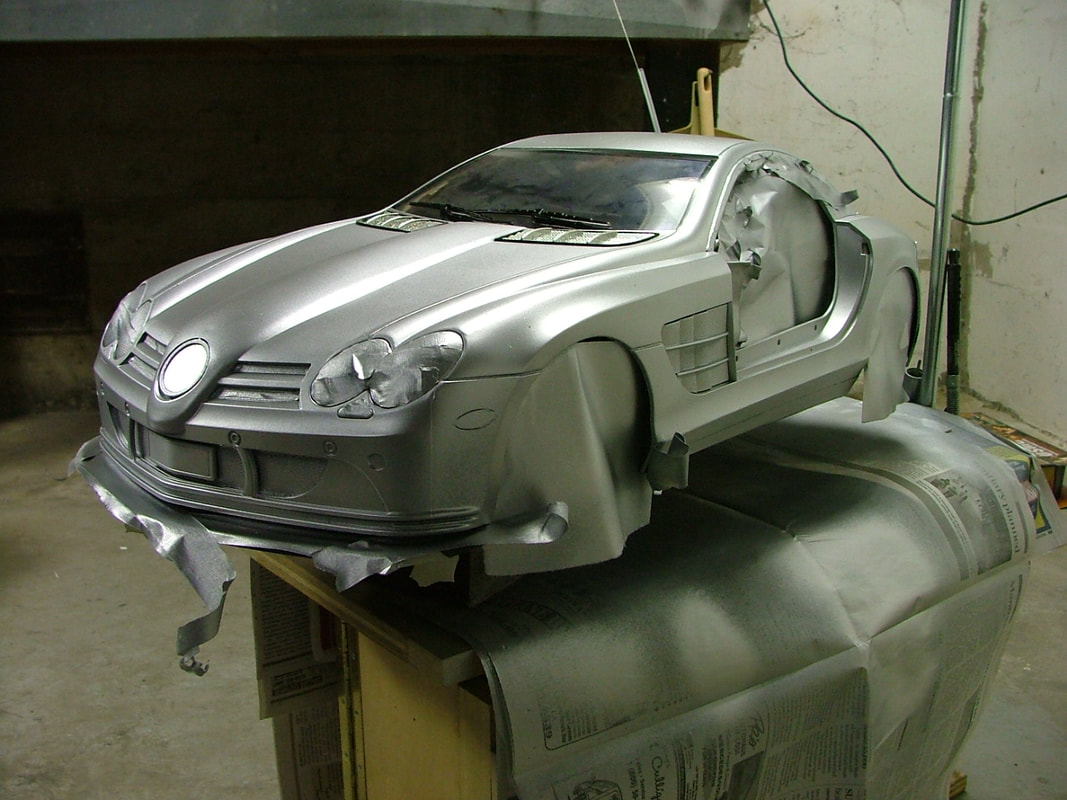 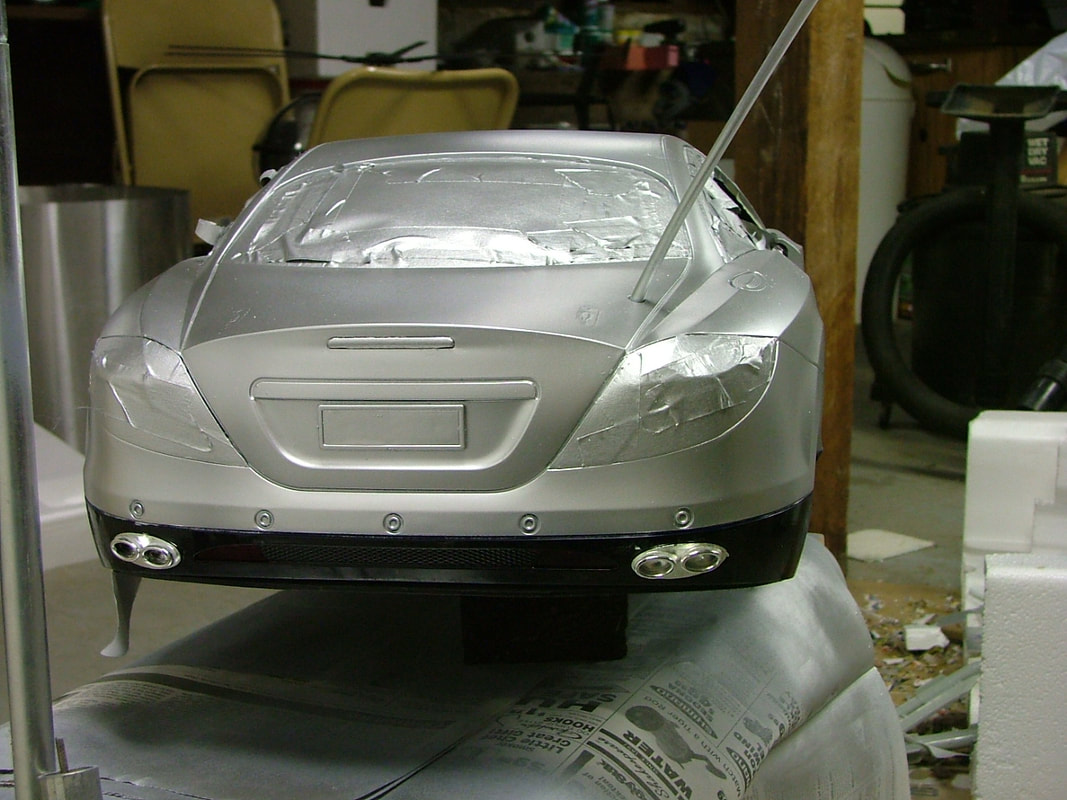 Joe was very happy to finally be able to sit inside the car. 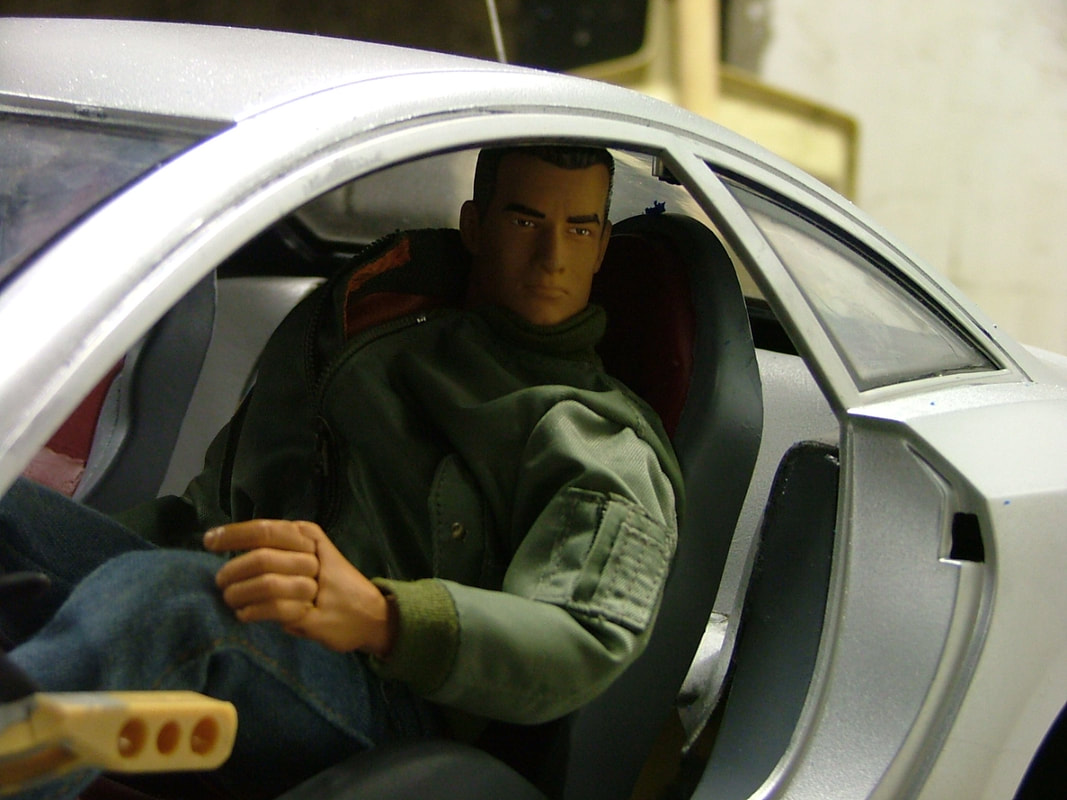 I experimented with different fabrics to use on the interior. I used gray vinyl for the area behind the seats. My idea for the seats was to use a maroon fabric for the seating surfaces, but I couldn't get anything to fit the contours properly. I resorted to painting the seats. The floor is covered with black adhesive felt.

One of my goals in modifying the interior was to allow the tallest figure I owned at the time- 21st Century Toys Matilda- to be able to fit inside. The result is that even Cy Girls in stiletto boots would fit. Here's one giving Joe a test drive: 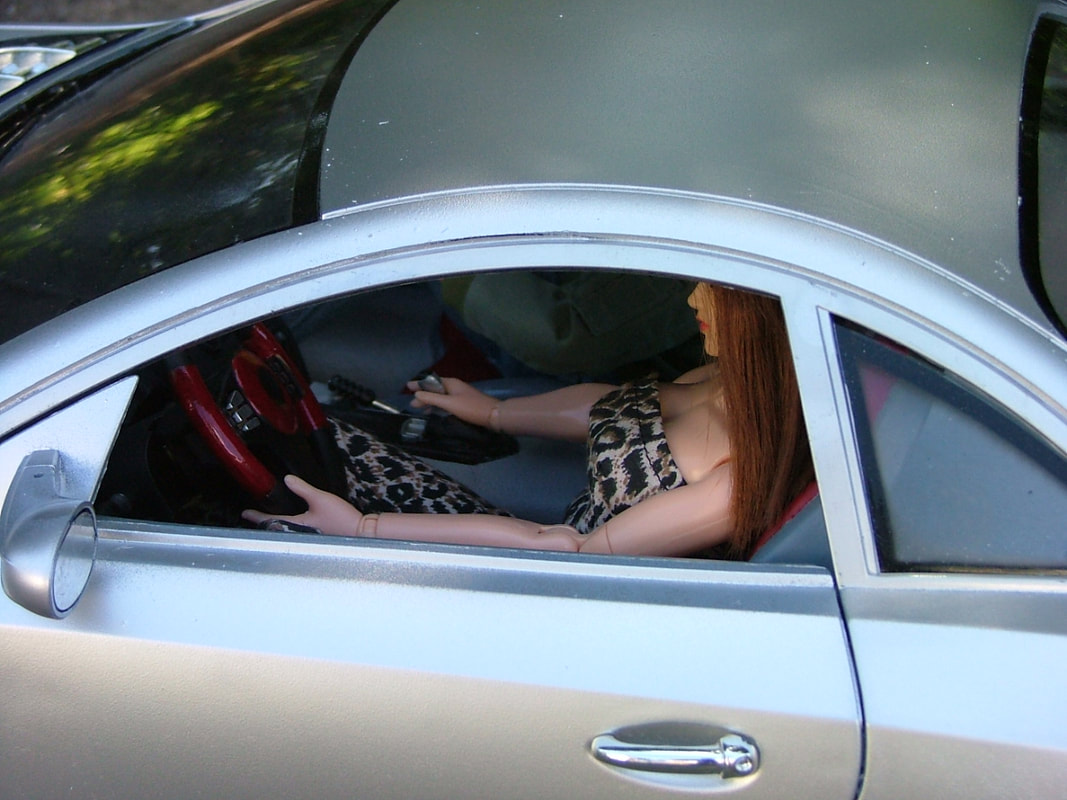 The steering column can be adjusted for different figures. Notice the relocated gear shift lever. This car has appeared in the saga: 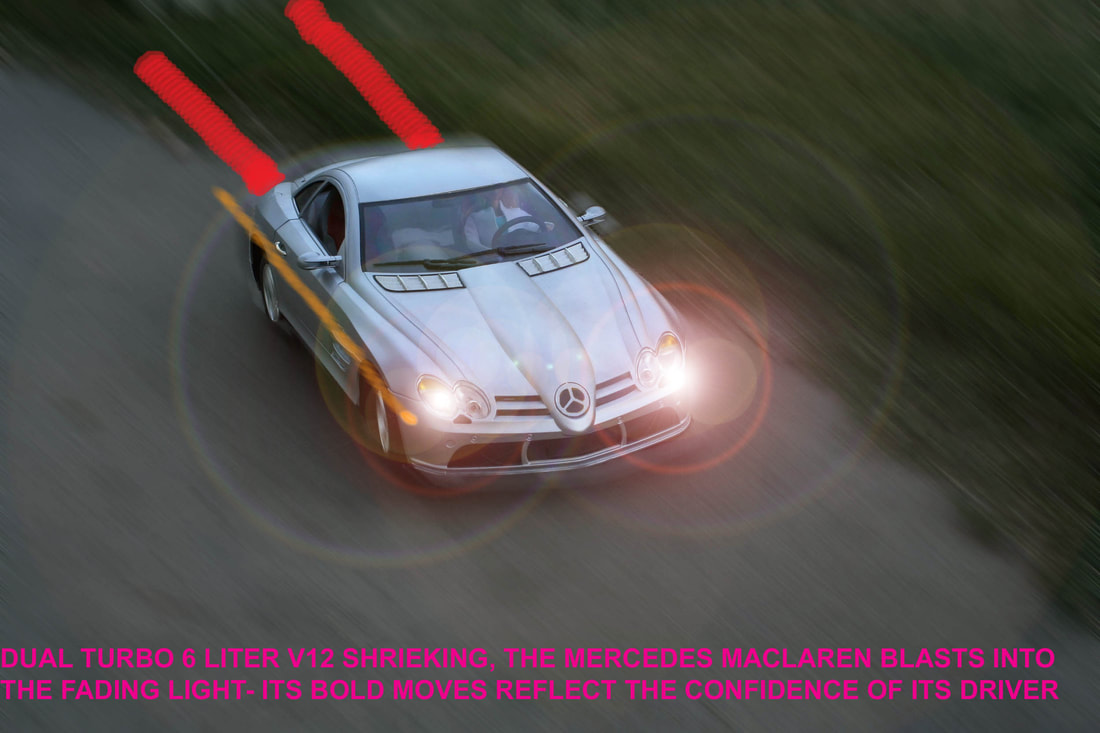 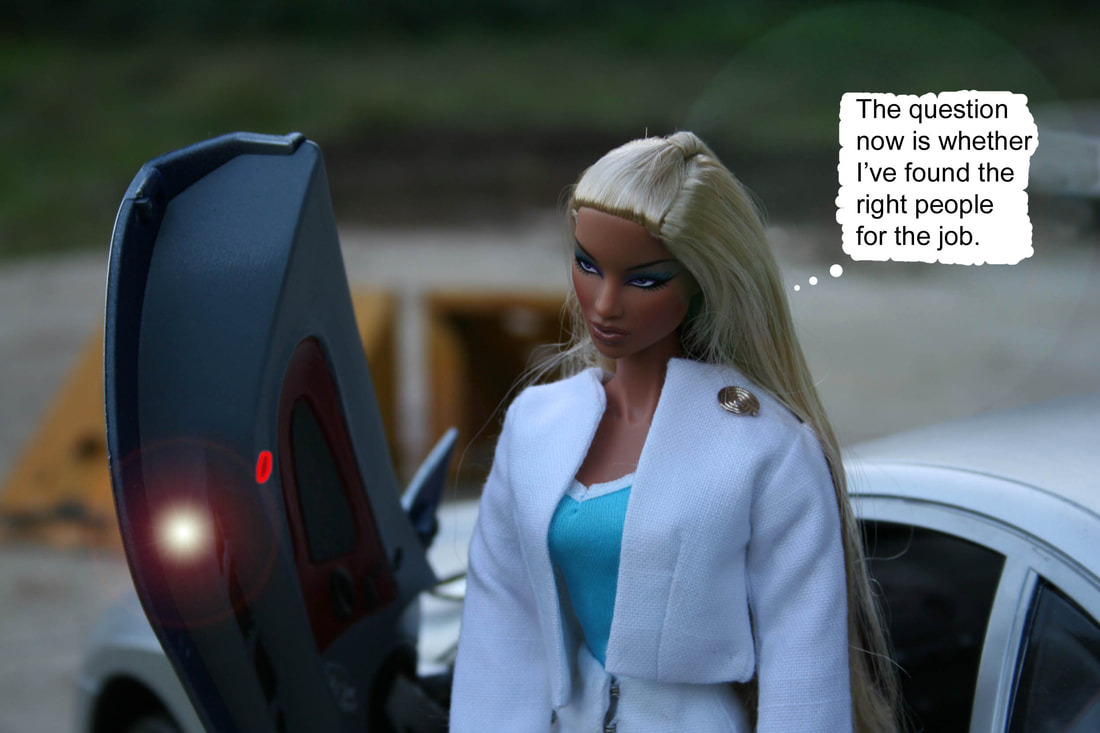 For more views of the completed re-work of this car and a comparison with another McLaren, please see the next post about the Mercedes McLaren.